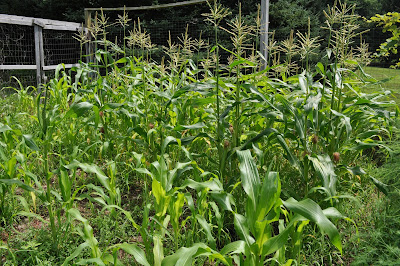 Ears are forming on the corn planted May 17. Our mouths are already watering; gardeners are ever-hopeful! The variety is Spring Snow F1, which is supposed to tolerate colder weather at the start. That much seems to be true. This was last year's seed. Harris seems to have discontinued it this year. Again, I really beefed up the soil this year and am spraying diligently, as last year we got nothing. In the foreground was a later planting (June 1) of several SE hybrids, which hardly germinated, I guess because the seed was from 2011, who knows. So mostly what you see is what I filled in on June 15 with Stowell's Evergreen, an heirloom OP variety that grows tall. I'm hoping that's not too late for this long-season corn. It was the only seed I had left. 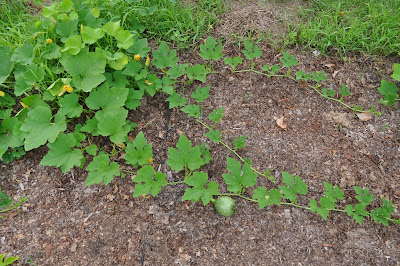 Yay! A squash! I thought this is where I planted Waltham Butternut, but it looks more pumpkin-y to me. Or it could be Tatume, a new (to me) variety I'm trying. This will teach me not to trust memory and to label the hills. It would have been OK, but when some seeds did not come up I replanted based on what I remembered. So now it appears everything is mixed up. 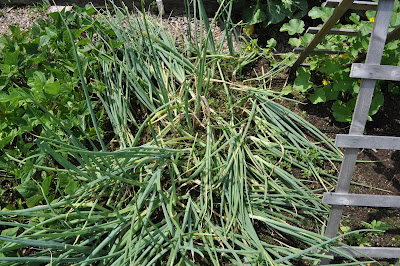 Something sat on the onions! I guess that means harvest-time. I thought the leaves wouldn't collapse until they were browner. Also it seems strange that all of them would flop at the same time, regardless of size. Maybe they come to a mutual decision "we're not going to grow anymore." 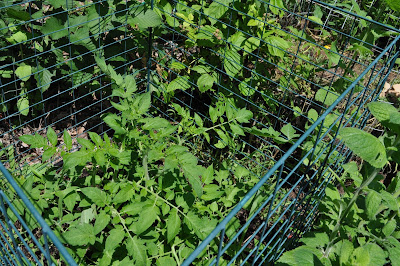 A volunteer tomato now taking over a compost bin. It's growing lushly, as you would expect. I wonder what variety it will be? In the bin to the left of this one is a volunteer dill plant, now flowering. I'll have to catch it before the seed matures and falls, or I won't be able to use this compost! 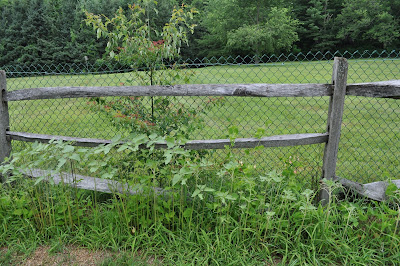 Not all is well, of course. This was supposed to be my Wall O' Sunflowers, including a few American Giants that reach 16 feet (4.88 m), all planted on May 26. Something has completely defoliated them. I have found no culprits, and spraying with Pyrethrin did not help. What could it be? I do have another patch (var. 'Sunseed') in the row-crop area, and they are doing better, but are only supposed to be 4 or 5 feet tall (1.2 - 1.5 m). 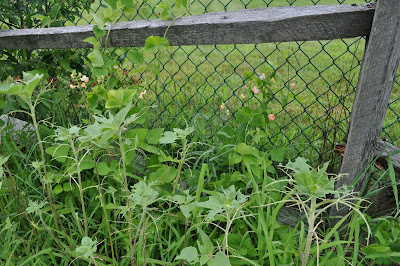 You can see the Scarlet Runner Beans planted behind the ravaged sunflowers. These were from seeds I gathered from last year's crop. They came up true, and some are starting to flower, a lovely coral-pink. They were planted the same time as the sunflowers. Maybe this year I'll eat some as dried beans. I love their mottled purple color).﻿
Posted by Eight Gate Farm NH