Welcome to another Harvest Monday, courtesy of Daphne. Where did July go?? 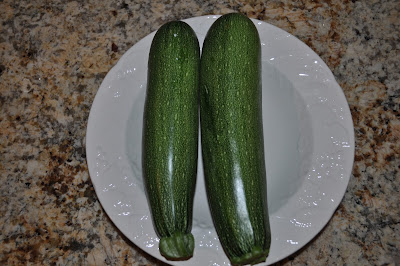 Zucchini continues to roll in at the rate of two every couple of days. While I am happy because we are getting so much more than last year, I have to say I thought the 4 plants would be producing more. Because of this, I'm not so sure this variety (Tigress F1) will be grown next year. 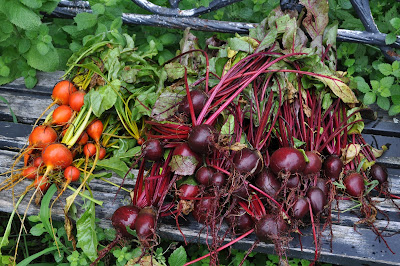 The beets in the first bed, all planted April 17, seemed to not be getting any bigger, so we decided to pull them all up before they got woody. There are three varieties of red beets, but they got all mixed up so another opportunity to learn something evaporated. Maybe next year I'll only plant the Detroit. We do have another 1/3 of a bed devoted to more beets, planted two weeks after the first. Those harvested went to the table and the freezer. 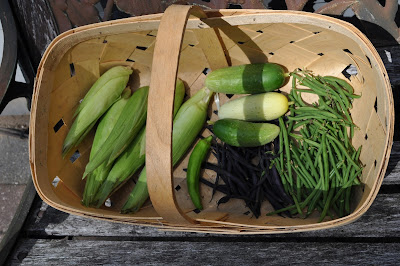 Beans are steady, and cukes are starting to rev up. I don't know where the yellow mutant cuke came from, but it tasted just as nice as its normal siblings. 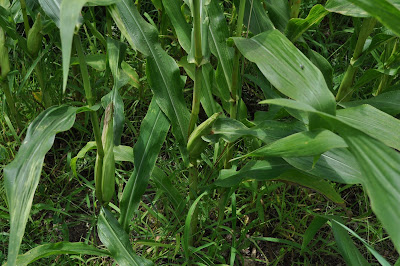 We've gotten maybe 15 (undersized) ears of corn. One problem may be that I never thinned them when they were small. They should be a foot apart, but ours are more like 4". But mainly, I think it's the bug that is eating the silks, despite spraying with Pyrethrin. When I pick an ear I usually find earwigs at the base. Maybe that's where they get their name. I don't know if they are causing the damage, or just like hanging around in dark damp places.
I think that may be about it for the 1st planting of corn, sad, but I have high hopes for the second. I'm trying a trick I read at Fedco - putting drops of mineral oil on the silks to ward off the bad guys. 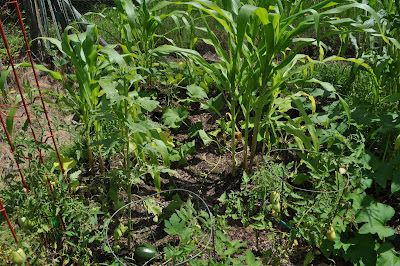 Speaking of corn, I haven't mentioned my "Three Sisters" experiments. This is the 3rd year I've tried it. In the past two years, the pole beans just overwhelmed and pulled down the corn, and the squash all got bug-blasted. This year I tried just 2 sisters, leaving out the beans. So far, better results (nothing harvested of course). As much as I love the concept, I think next year I'll use the four hills for something else entirely. 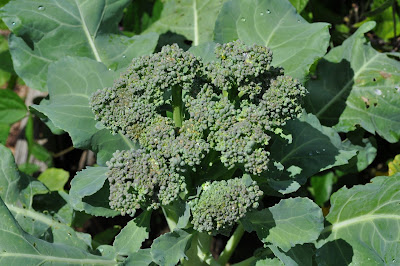 This was supposed to be some "fall" broccoli. I tried something new this year and sowed a few seeds directly in the garden on May 18, and here one is, ready for picking already. The 4 or 5 others are not heading yet though. Looks like the earlier summer heat did not hurt them. The variety is "Waltham." 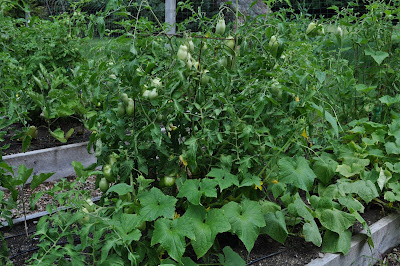 I'm envious of those in my area who are enjoying their tomatoes now. Ours, while plentiful, just aren't ripe yet. Maybe soon though. So far, I've found only one two fruit with Blossom End Rot. Oh, and a reminder (mostly to myself). Make sure you don't plant vining cucumbers with anything else. 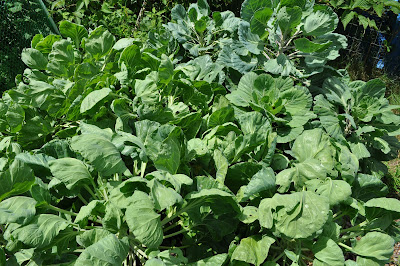 So, typical of gardening, I've read conflicting advice. Some say to pick off the bottom leaves of Brussels Sprouts and work your way up, others say to cut off the top in September, both to encourage sprout growth. Has anyone tried either or both methods? And don't you think using the SFG approach of one plant per square causes crowding? Certainly looks that way to me. 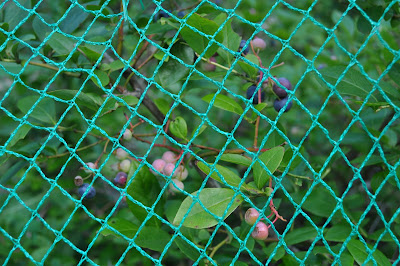 The blueberries continue to ripen, but at a trickle. This is kind of a pain since we have to part the netting each time to pick, then replace it. The netting is mostly working, but a few birds still get in, especially the catbirds. Boy do they fuss when they are under the net and see you!
So what's a great use for your own blueberries? 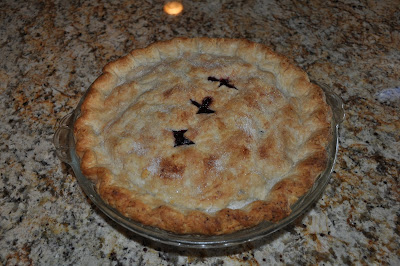 Pie, of course! All hand-made by The Kitchen Goddess.
So that's it for this Harvest Monday. Thanks for reading, and I wish you gardening success!