If one picture could typify our harvests this week this is it: 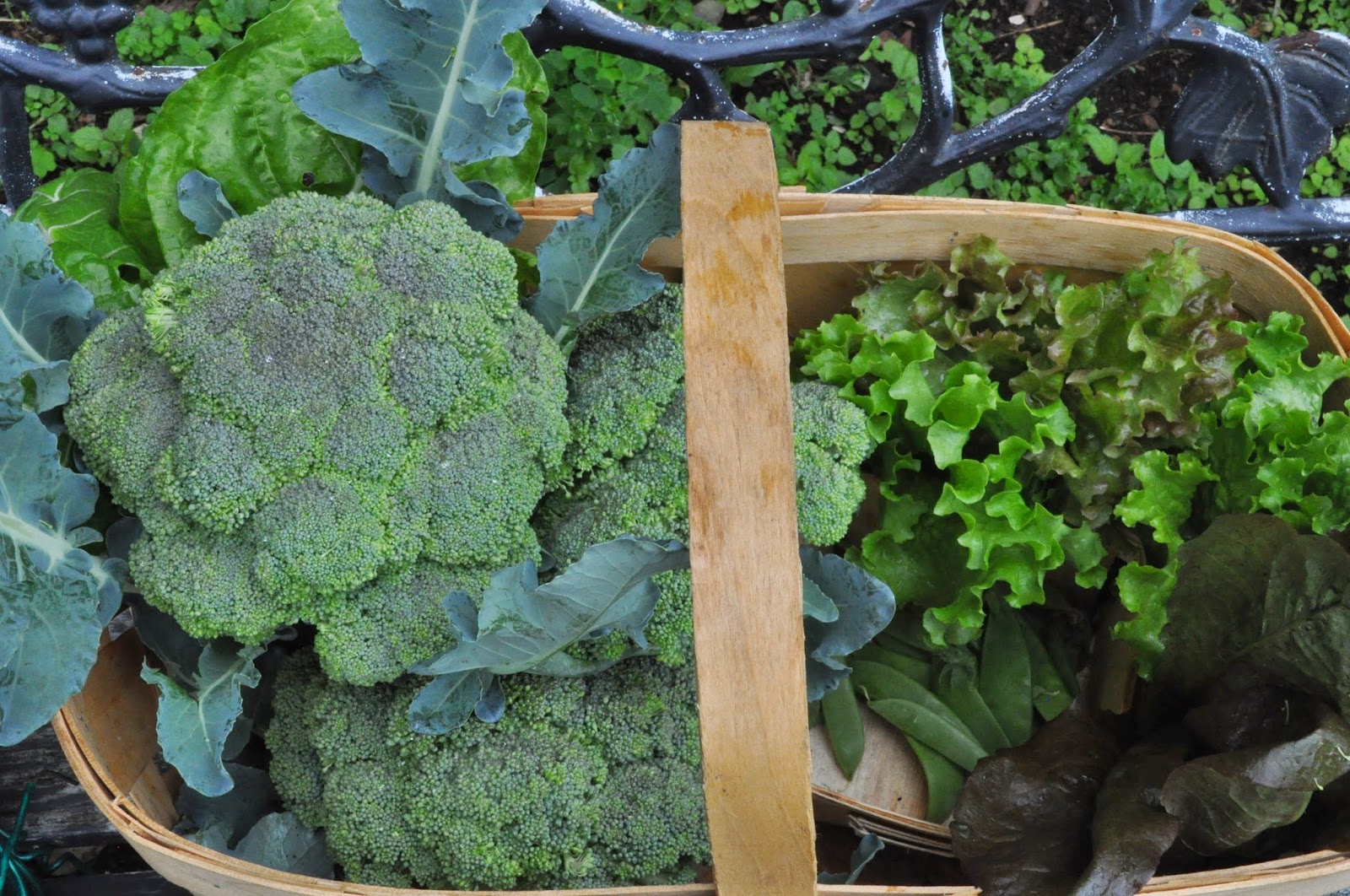 Every day was lettuce of three varieties, and both snow and snap peas. And broccoli, oh my gosh, I've never grown such lovely broccoli, if I do say so myself. Here was the largest single picking, each head over one pound: 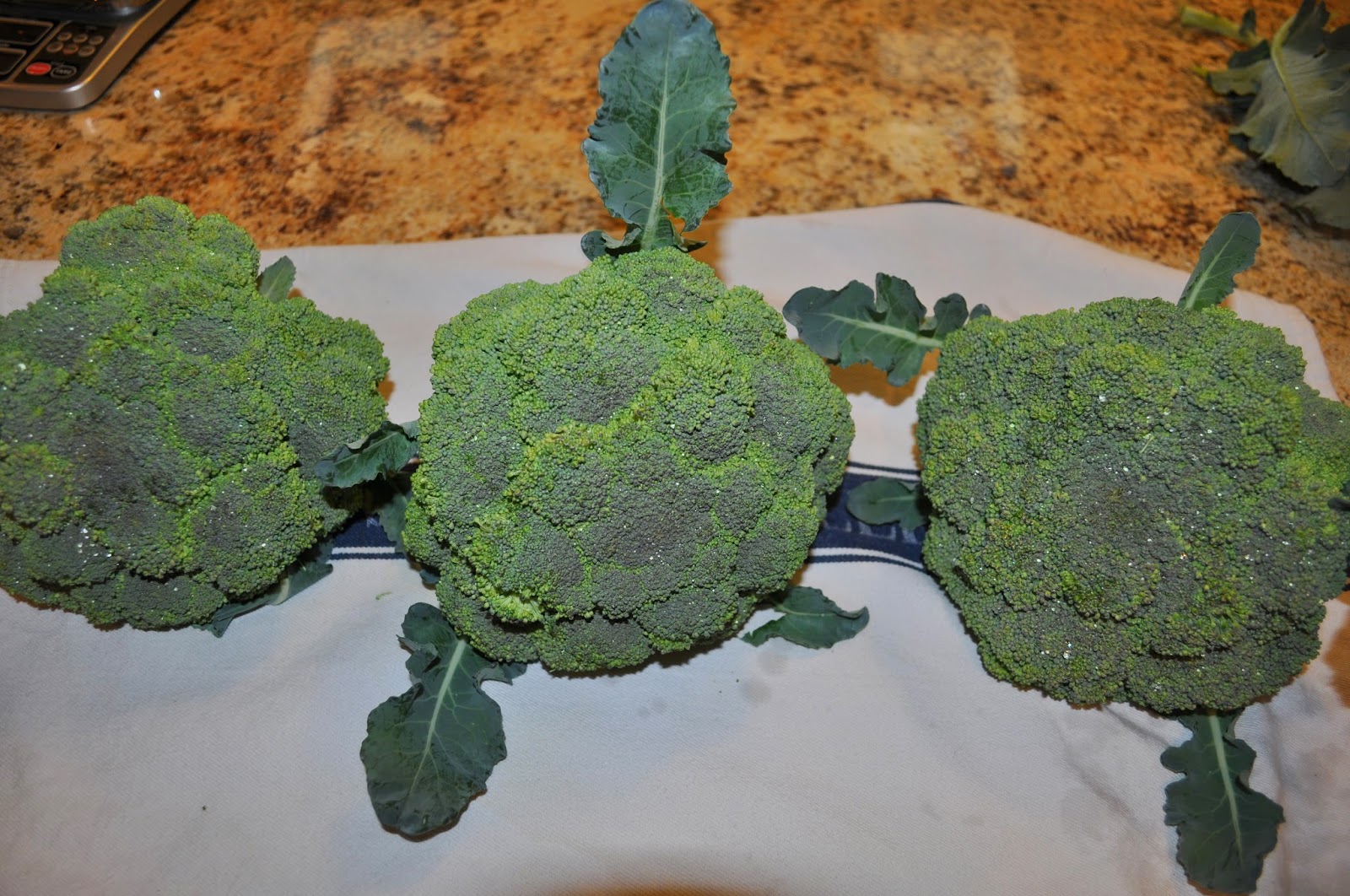 What you see here are two Fiesta and one Arcadia. Other than Fiesta being slightly earlier, I don't see much difference between the two, in appearance, size, or quality. Either one is a fine choice, and makes all the difference if you value your broccoli production, as I have discovered this year.

We got four more slightly smaller heads, finishing off the Fiesta. There are four more Arcadias still sizing up. I hope they are ready before we have to travel again next week. For the record, all our broccoli was started from seed on March 25 and transplanted out April 25. The very early Blue Wind variety is still sending out side shoots.

Our recent dinners have consisted of salads with grilled meats of one kind or another. It would be super-healthy, except for my love of creamy dressings. For an appetizer we have Sugar Snap peas. The snow peas get frozen. This is the first year I've grown true Sugar Snaps. Fedco said the vines get tall, and they are right. The trellis is 5 1/2 feet tall. 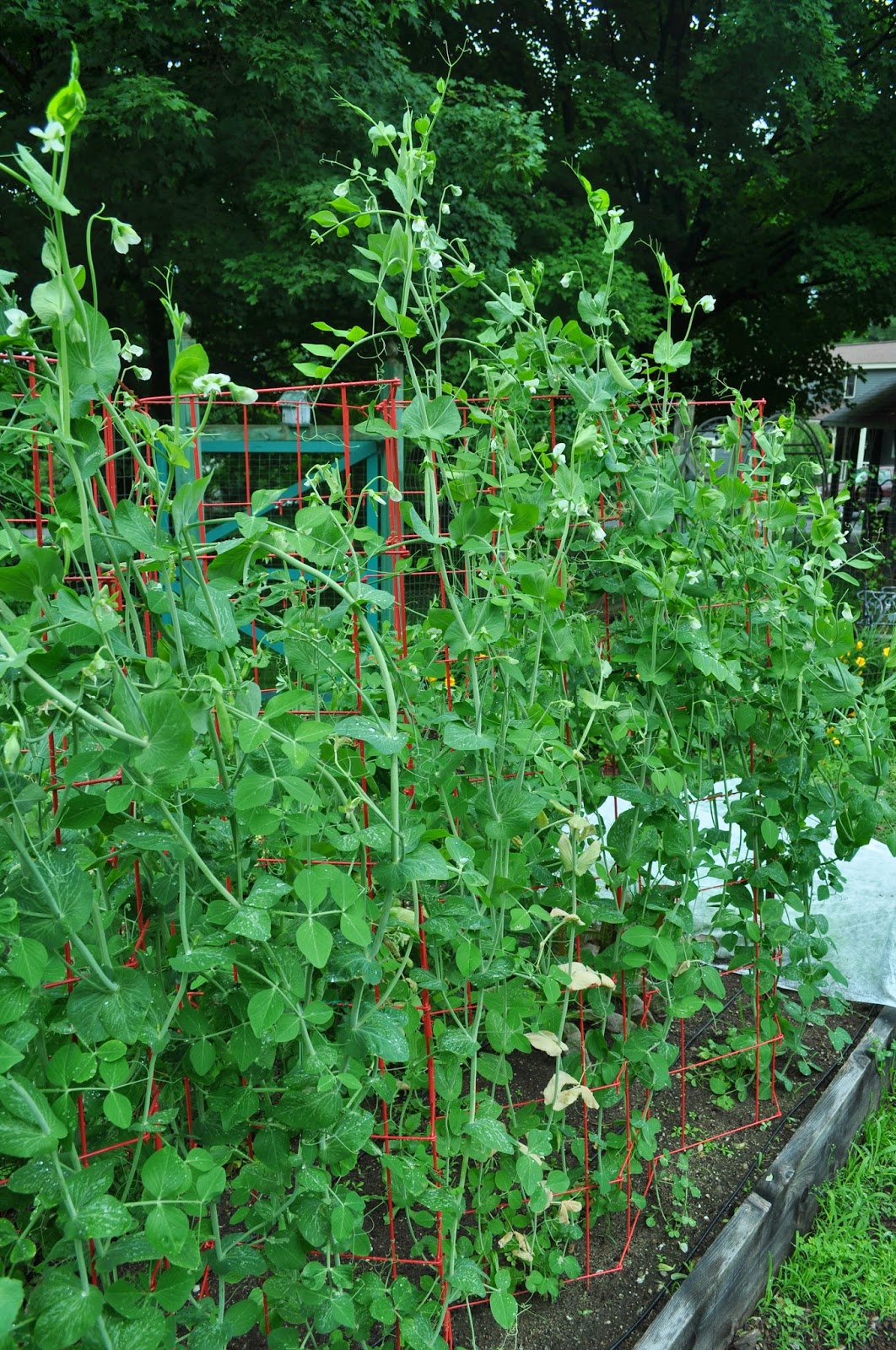 For the snow peas, I had a few Avalanche seeds left, and bought Blizzard from Fedco for a replacement. I have to say I'm not as impressed with Blizzard. Avalanche is unique because of the profusion of tendrils it produces instead of leaves. Its pods are frequently doubles, and large: 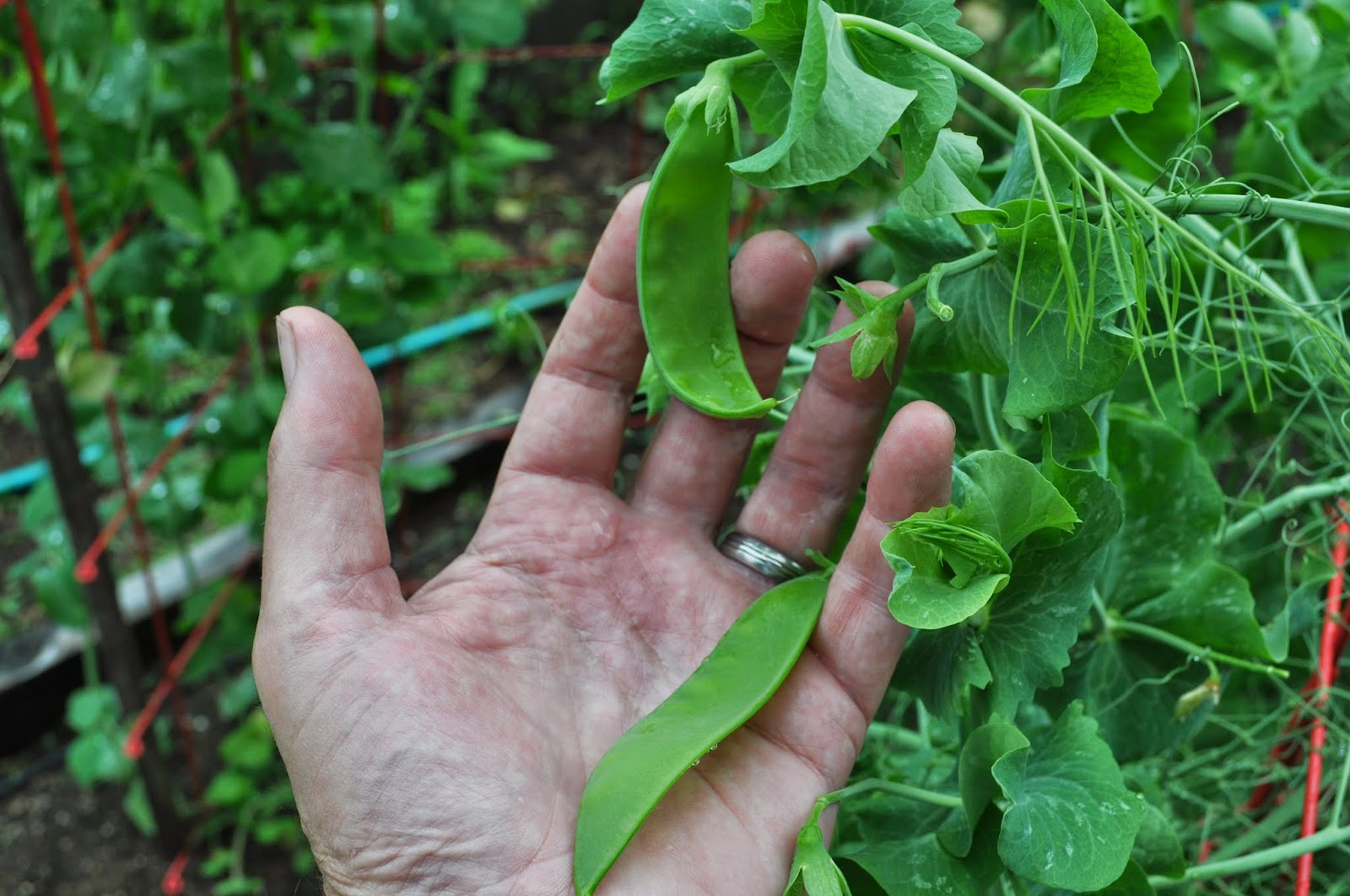 I'm finding Blizzard to have smaller pods, and just not as productive. 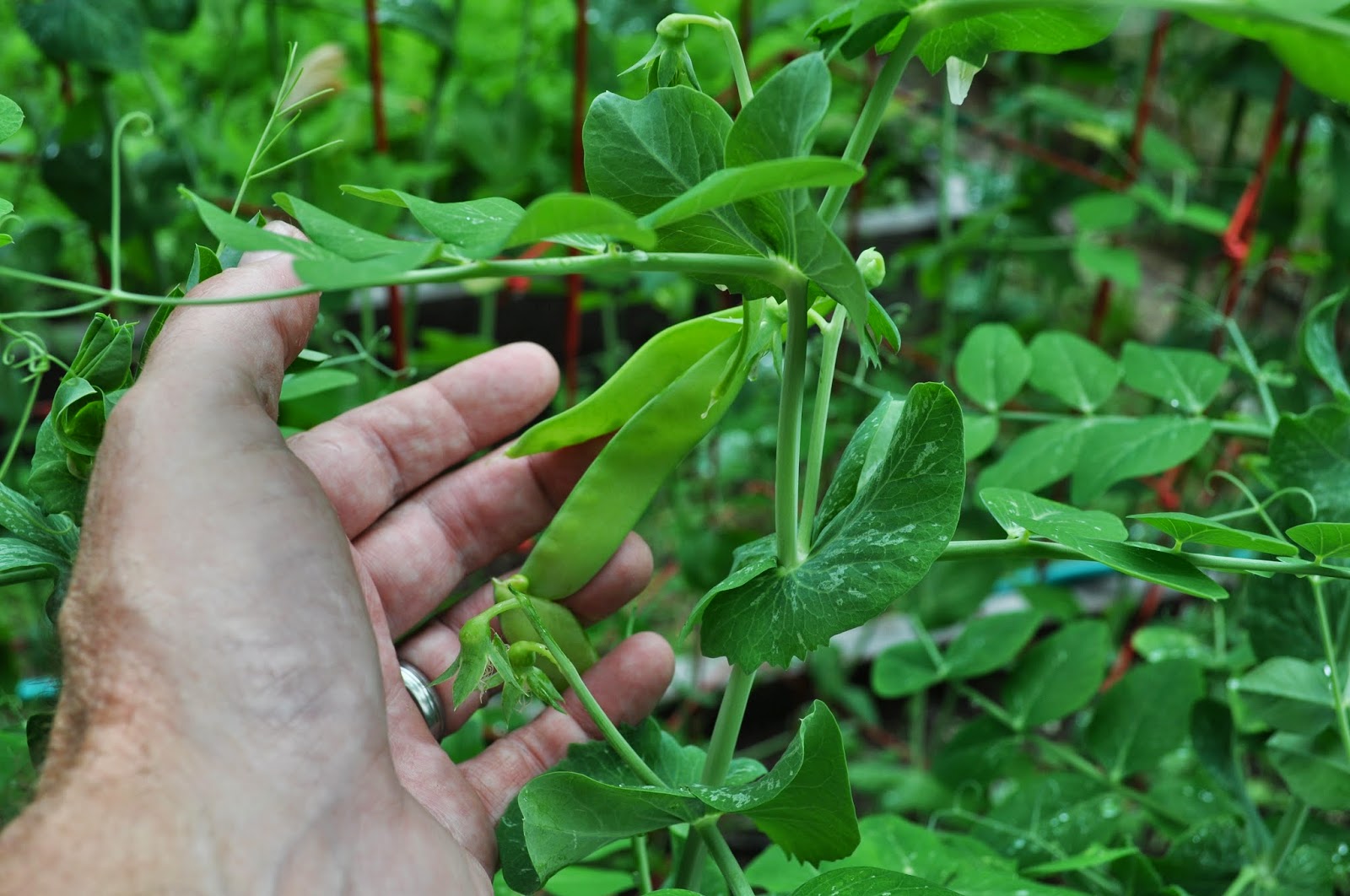 But then, it has been a challenging year, with poor germination all around. So maybe next year this plant will come into its own.

Well, as I'm sure you've read elsewhere, this was an interesting week weather-wise for gardeners on the East Coast. Hurricane Arthur was the big news. It only brought us 18 hours of soaking rain, and some very gusty winds on the back side. Actually our biggest problem preceded Arthur by a day or so. We got overnight thunderstorms, with apparently violent winds that caused us some grief. Our onions got flattened: 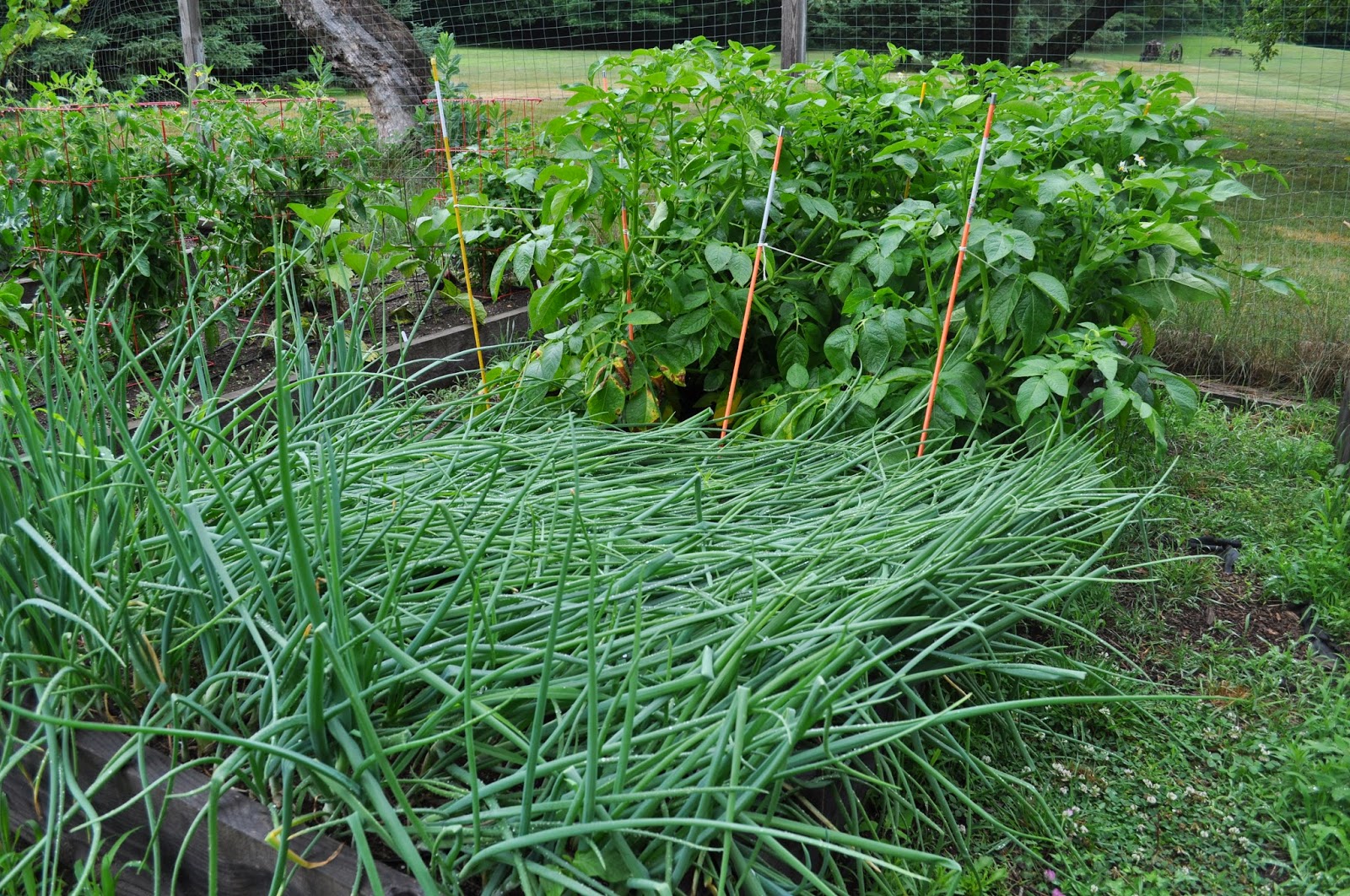 Nothing to do for them. I hope it won't hurt production, but I don't know. Since normally the leaves flopping over is the sign they are ready to harvest, what will be our clue now?  At least the potatoes in the background came out all right, since they were strung up.

The sweet corn shown here had some layover, but we were able to prop them back up (using cone-shaped spare tomato cages). They should be okay. 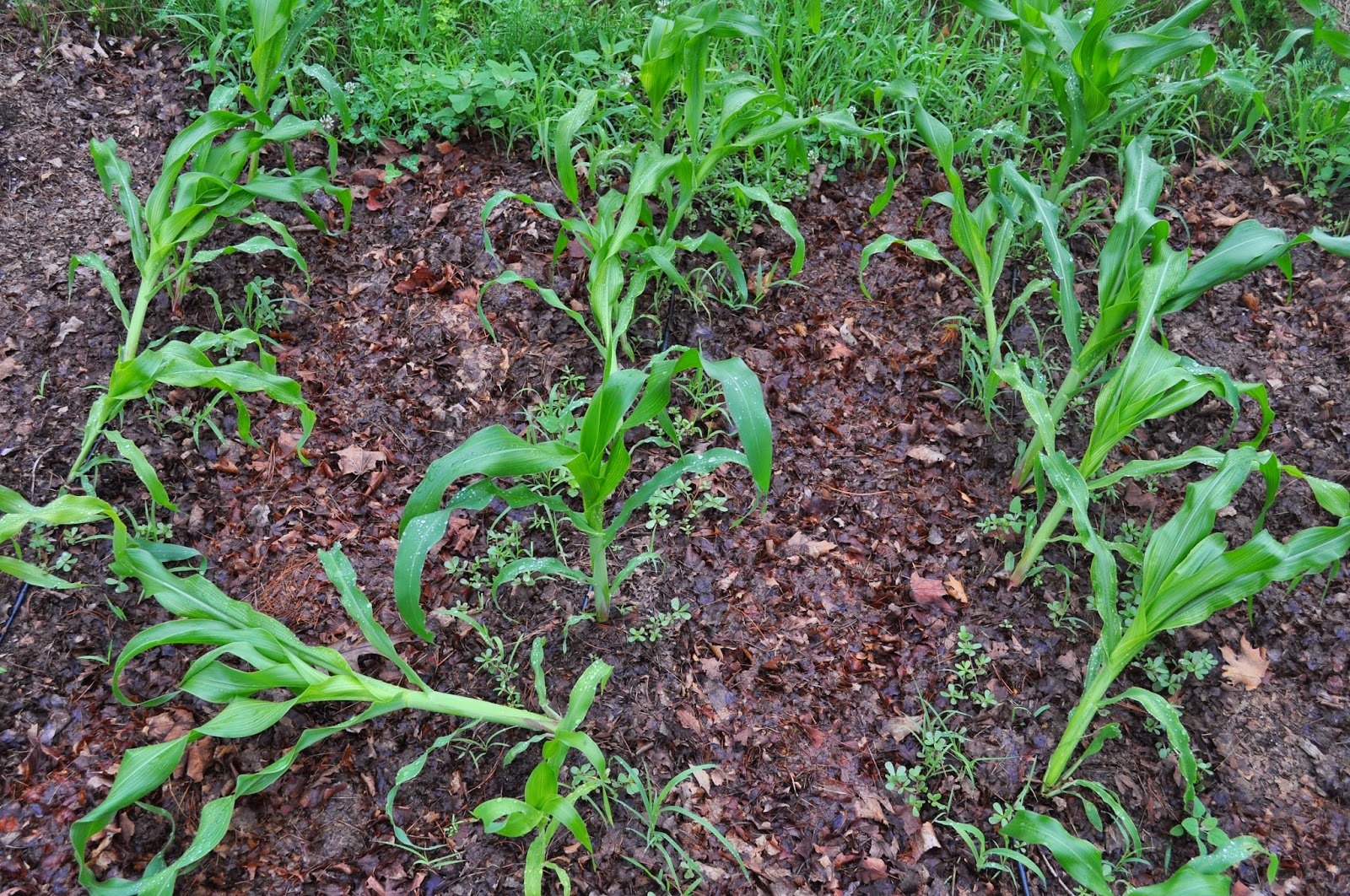 The Sugar Snap peas I showed you earlier also got folded. They blew right off the trellis. We'll see how they fare. The shorter snow pea vines are fine.

Here's something funny. This is supposed to be a Chocolate Bell Pepper. Somehow I think it isn't. I guess there was a slip-up at Fedco. 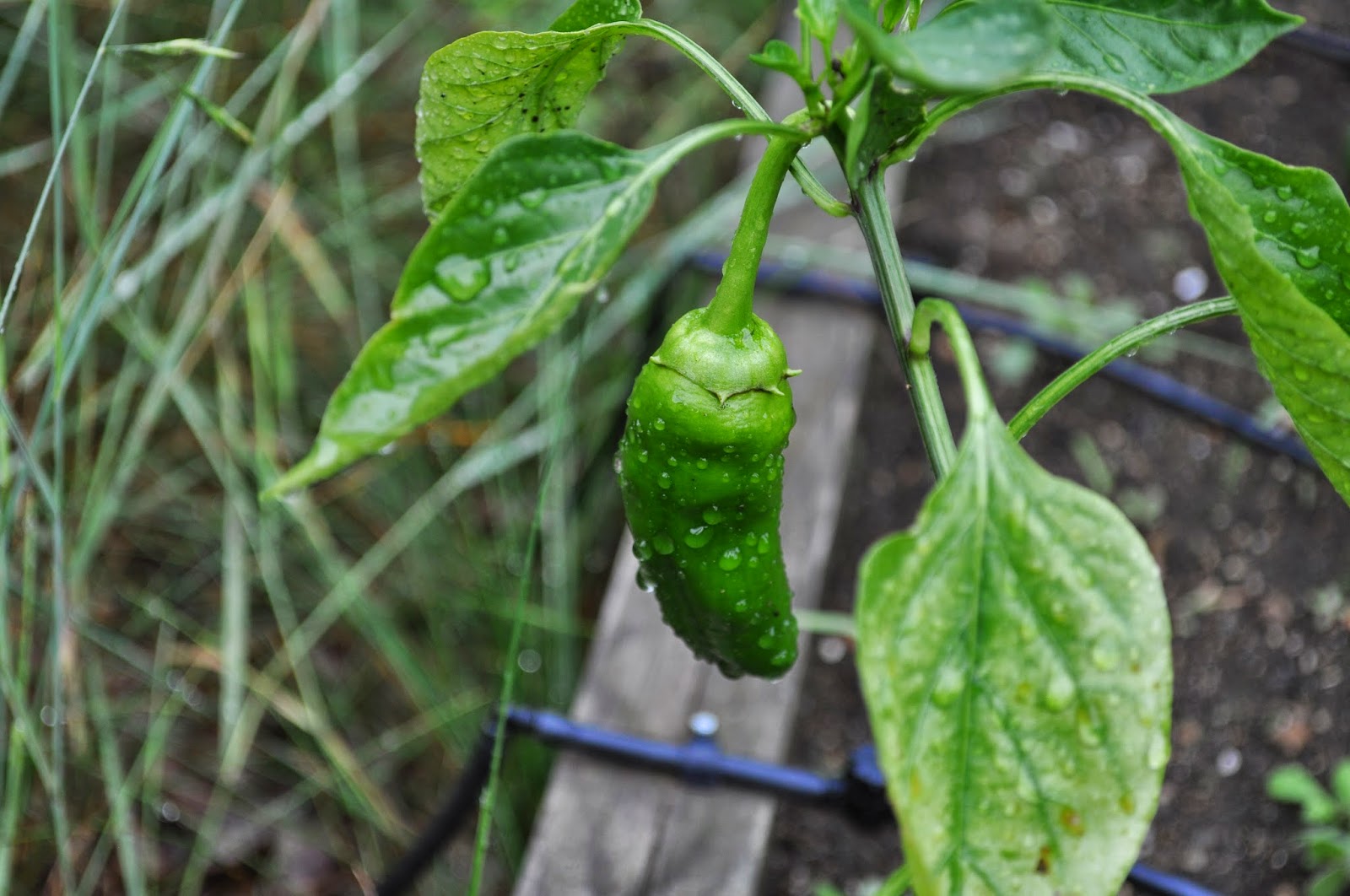 Our last harvest of note this week is the first blueberries, now safely under bird netting. The berries are big and flavorable, but I don't think there are as many as last year. 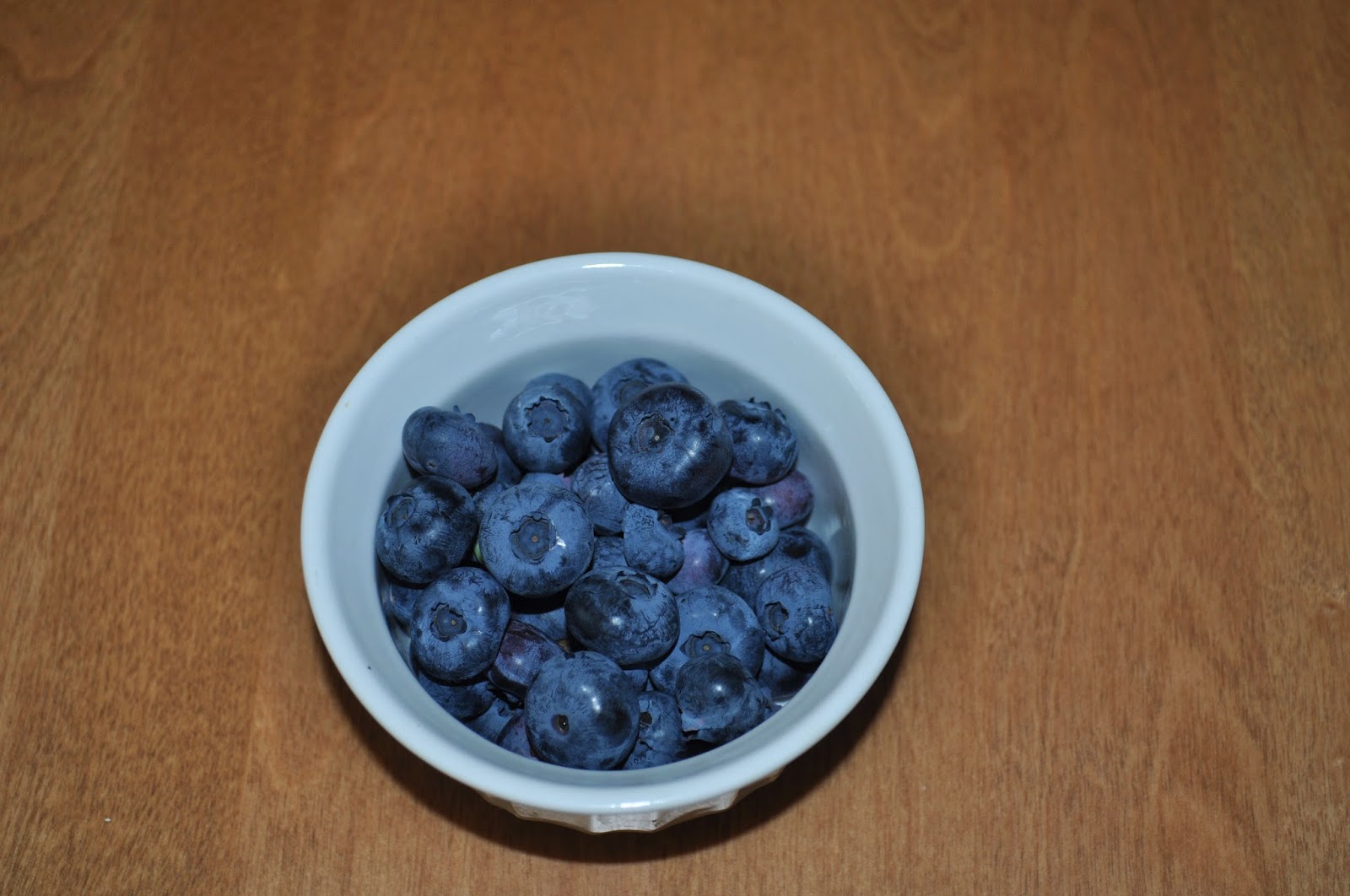 Thanks for reading, and now click back to see the other wonderful gardens and harvests that join in Harvest Monday, sponsored by Daphne's Dandelions.
Posted by Eight Gate Farm NH