Welcome to another Harvest Monday update from Eight Gate Farm. Harvest Monday, as you undoubtedly know, is hosted by Daphne's Dandelions. If you got here from there, be sure to go back there when you're through here!

A Monday picking. Heavy rain was predicted to move in, so we thought it best to take the ripest tomatoes before anything happened to them. Clockwise around the outside, there is one Caspian Pink, five Incas, two Rutgers, six Sugar Plums (grape tomatoes), five Taxis, and four Romas. Of course, there's also an overachieving Caspian Pink in the center. 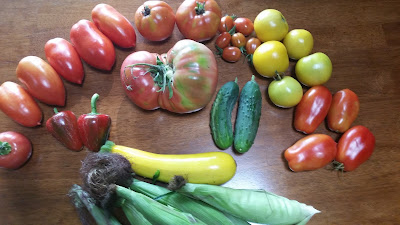 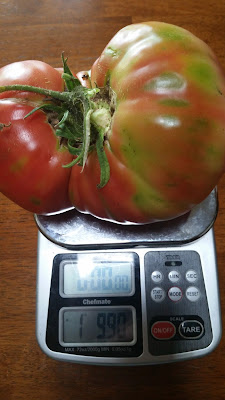 The heavy rain didn't actually materialize, but we did get a few welcome hours of steady downpour. And the big tomato ripened beautifully indoors. We savored it for four separate meals. I'm saving its seeds, just in case it breeds true. Anyone who wants to try a sample, shoot me an email at eightgatefarm@outlook.com and I'll do my best to mail you some. No guarantees the outsized results will be the same, but it might be fun.

A Wednesday harvest, with our weekly artichoke ration. 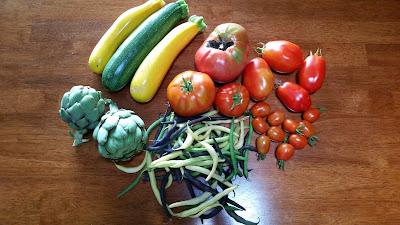 A Friday harvest, showing our first picking from the second succession of Espresso bi-color sweet corn, and a few shishito peppers. Even though the corn stalks were coated with diatomaceous earth to repel the earwigs, when these were picked the disgusting, silk-damaging creatures were still hiding in the cob bases. I think this experiment is a failure. 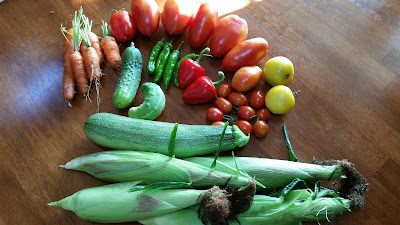 And a Sunday harvest. 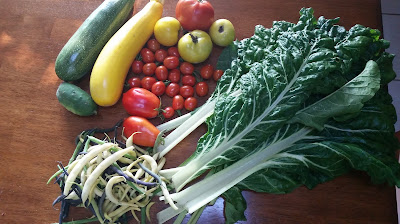 It's been a strange bean year. We got large early harvests, but they slowed way down after that, and many of the later pods were small and curly. I wonder what caused that? This will be the last real picking, as I pulled most of the plants. Last year, we were still picking well into September.

I love sunflowers, especially tall ones. This year I planted "Mongolian Giant." The seeds were literally over an inch long. It's supposed to grow up to 14 feet (4.25 m.) tall. These won't reach that, I'm think, but they are still pretty tall. I'm tall, but I slouch. 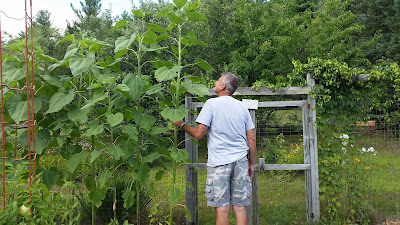 That's it for this week. Thanks for reading! I look forward to your Harvest Monday contributions.
Posted by Eight Gate Farm NH