I'm not partial to fennel root. So why would I grow it? It started out for one reason, and ended up being another.

When I was a youngster living in California, wild fennel (Foeniculum vulgare) was a plant I was very familiar with. We called it "anise," and chewing its seeds were just the thing for freshening up your breath before you got home to face suspicious parents. I still like the flavor of those seeds, and I think the plant itself is attractive. Of course, in western states, fennel is considered invasive, and certainly does grow everywhere, especially coastal environments. Being the wild variety, it isn't the cultivar used for root production, but they are similar.

A few years ago, on a trip back to California, I gathered some seeds and brought them back home. Last year I started a plant with them, and transplanted it to the Kitchen Herb Garden. It was really just for fun and nostalgia. It grew pretty well, but was munched by caterpillars down to just stems. It rebounded by the end of the growing season. I was pretty sure fennel would not overwinter here, so I started another plant this year. It turns out the original plant did regenerate this year, so I have two in the herb garden.

Once again, caterpillars found them. 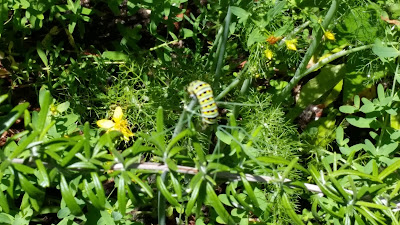 This is the larvae of the familiar Black Swallowtail butterfly (Papilio polyxenes). Gardeners know them as consumers of dill, parsley, and the like, but we tolerate them, since the butterfly itself is so beautiful.

So my fennel is serving as a "trap crop" for the parsley and dill in the herb garden, and I don't really care if they demolish it, which they did. I watched them get fatter and fatter, and would poke them now and then just to see those yellow feeler things pop out and distribute a pungent odor (their natural protection). I actually did find one on parsley, and re-homed it to the fennel. But I guess I have the home version of the children's book The Very Hungry Caterpillar, because they weren't done eating, and moved on to a nearby dill. It too is now stripped down to mostly stems, except for the flower. 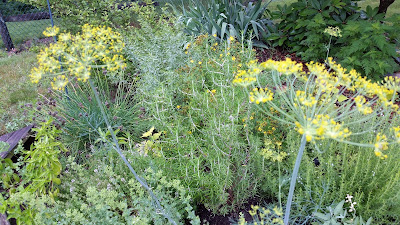 I still wonder if the fennel will truly be a perennial here. It will be an interesting experiment. I think there's very little chance of it becoming invasive, as I don't plan to let any seeds get away if it ever does set them.
Posted by Eight Gate Farm NH