Here's another Harvest Monday update from Eight Gate Farm. Weather-wise, the days have been quite pleasant, but the nights cool. In fact, early this morning (Monday) we registered 48 F. (~8.9 C.). Fine for the brassicas, not so much for the solanacea. But much warmer weather should be arriving later this week.

Starting with the "first harvests" is a cutting of garlic scapes from about a dozen of the 40 plants I grew. They are early this year. We love this useful "by product" of garlic production. 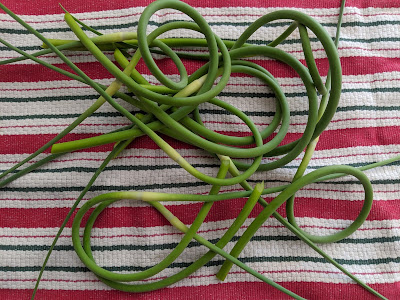 Another first harvest is the result of a few onion sets planted last year that only grew this year. When this happens, they inevitably send up a flower stalk. We pulled them and got a nice bit of green onion. 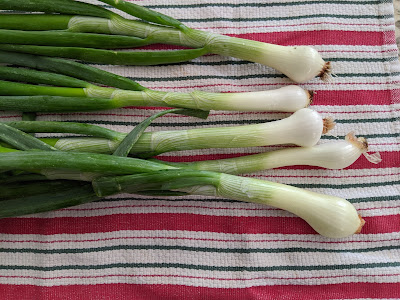 For continuing harvests, several times we picked salad greens from the two mixes, along with more radishes. 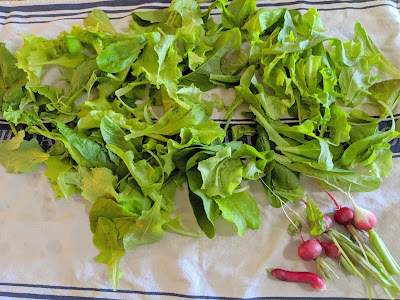 Also, we cut what will probably be the last asparagus spears before allowing the plants to leaf out. We will miss having homegrown asparagus! 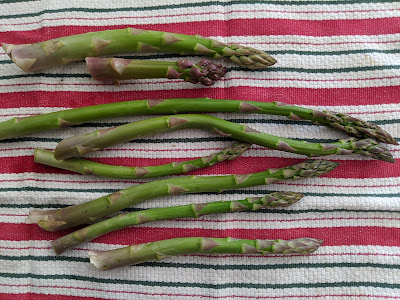 One of the two salad mixes has some spinach in it, which started bolting this week. We picked it, and enjoyed a nice spinach salad. Also, the remaining Asian greens were all bolting, so they came out too.

The Kitchen Goddess tried a new Paleo dish called "Asian Kebabs," consisting of ground beef and Asian greens, both mostly pre-cooked then seared on the charcoal grill, served with a spicy almond butter-based sauce using coconut aminos instead of tamari. A small acorn squash (store-bought) was also baked, then put on the grill. The meal was very delicious, and for us a novel way to use Asian greens. 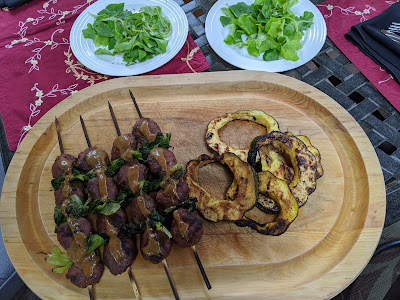 That's all for this week. Thanks for reading, and thanks to Dave at HappyAcres.blog for hosting Harvest Monday.