A Visit to Celia Thaxter's Garden

Celia Laighton Thaxter was a well-known 19th Century poet, writer, and patron of the Arts. For most of her life, she lived on Appledore Island, the largest (95 acres) of several rocky islands making up the Isles of Shoals, which are located about six miles off the coast of New Hampshire/Maine. Besides her extensive writings, she was a hostess at her father's hotel on the island, and planted a cutting garden to provide flowers for it. She lived in a "cottage" next to her garden. The hotel burned in 1914, and her cottage burned as well.
She published An Island Garden, which is still read today.
Appledore Island is the home of the Shoals Marine Laboratory, jointly administered by the University of New Hampshire and Cornell University. Its purpose is to conduct research in all phases of marine biology, and to provide an immersive educational experience for the students who live there.
A number of years ago, her garden was painstakingly recreated by the Laboratory, using the map and plant descriptions Celia provided in the book. People can visit the garden on certain days, and learn about her and her writings. The garden is maintained by island staff and Master Gardener Volunteers, which is where I come in.
On Thursday, August 4th, I was invited to participate with two others in the garden maintenance. It was an amazing experience. We had deadheading and watering to do before the next group of visitors arrived the next day. We worked fast, which left us time to explore much of the island.
After a COVID-19 test, we boarded R/V Gulf Challenger for the 1/2 hour ride to the island. (R/V means research vessel.)
We passed the Portsmouth Harbor Light.
Soon the island drew near.
The Army occupied the island during WW2 and built a fire control tower to assist in aiming the big guns guarding Portsmouth and Portland (Maine) harbors. Undoubtedly their activities helped destroy what remained of the garden.

Our Master Gardener leader, who has spent countless days on the island, gave me an overview and then we walked to the garden.
We set to work. The garden is small but packed, with less than a foot between the raised garden beds. You had to tread very carefully. I can't imagine how Celia was able to work in it in those excessive 19th Century dresses.
After a nice lunch in the main dining hall provided by the Shoals staff, we finished our tasks. I began watering, which is probably what I'm best qualified to do, as I am not much of a flower gardener!
Water on the island comes from a well, but a significant amount is provided by a desalination plant. The drip irrigation system for the garden comes from a rainwater collection system. As there's been little rain lately, the tanks were very low.
The island has electric power provided by a diesel generator when needed, but mostly comes from an extensive array of solar panels with a battery bank, and a wind generator.
Here's another view of the garden from an observation deck built above the ruins of Celia's cottage. We got to meet the current "Artist in Residence" when she led her students in a Field Sketching session on the deck.
Our work done, the leader escorted us to several interesting areas. Celia died suddenly on the island in 1894 (the year the book was published), and was buried in the tiny Laighton Family graveyard.
We visited rocky Broad Cove and several other places of interest.
At 3:30 PM it was time to go back to the mainland on the waiting boat. 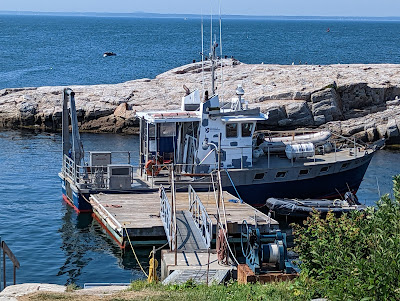 But we got an unexpected treat! The captain took us around the back side of the island, and past nearby Star Island and Smuttynose Island.
There are four private houses on Appledore. I don't know what they do for water and electricity.

I returned home very tired and over-sunned, but the experience was one of a lifetime. Apparently I did okay, as I'm going back on August 18th!
Posted by Eight Gate Farm NH