Welcome to another Harvest Monday report from Eight Gate Farm, brought to you by Daphne's Dandelions.

It's been another week of cooler-than-normal August temperatures. But production is still good.

A picking of tomatoes on Tuedsay: 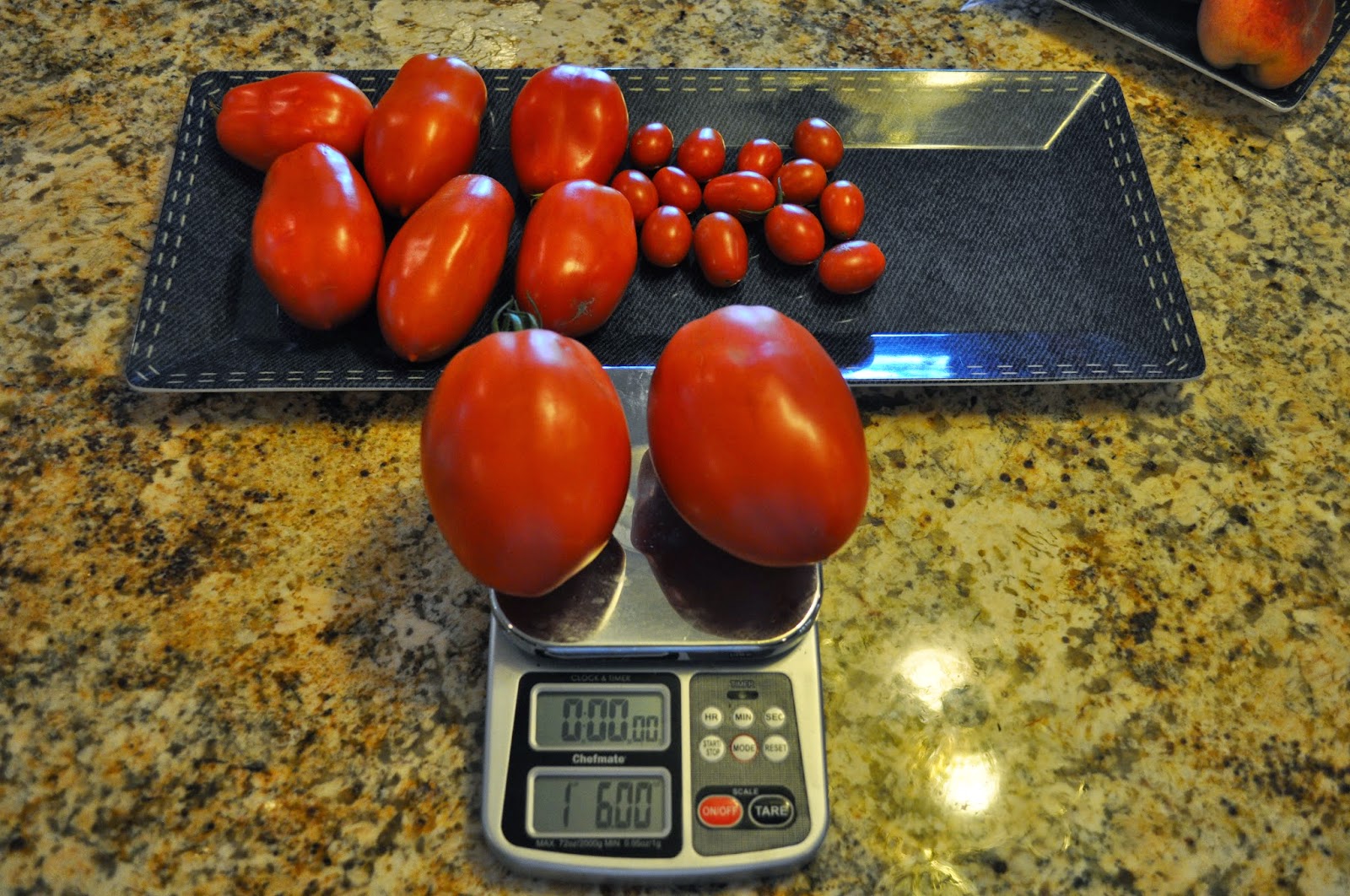 The Burpee SuperSauce variety is really starting to amuse me. Two of them together weighed 1 lb 6 oz. (~623 g.).

And another picking on Thursday. The largest of the SuperSauce weighed 13.8 oz (~390 g.), and the others were not far below that. So, I'm probably not going to get any of the touted 2-pounders, but I'm happy. They are incredibly meaty too. Oh, and there's a zucchini that almost got away from us. The zucchini plants (Tigress F1) are starting to get powdery mildew, so I probably will be shutting them down before long. They are so vigorous, though. One of them even had a SVB but never slowed down production. 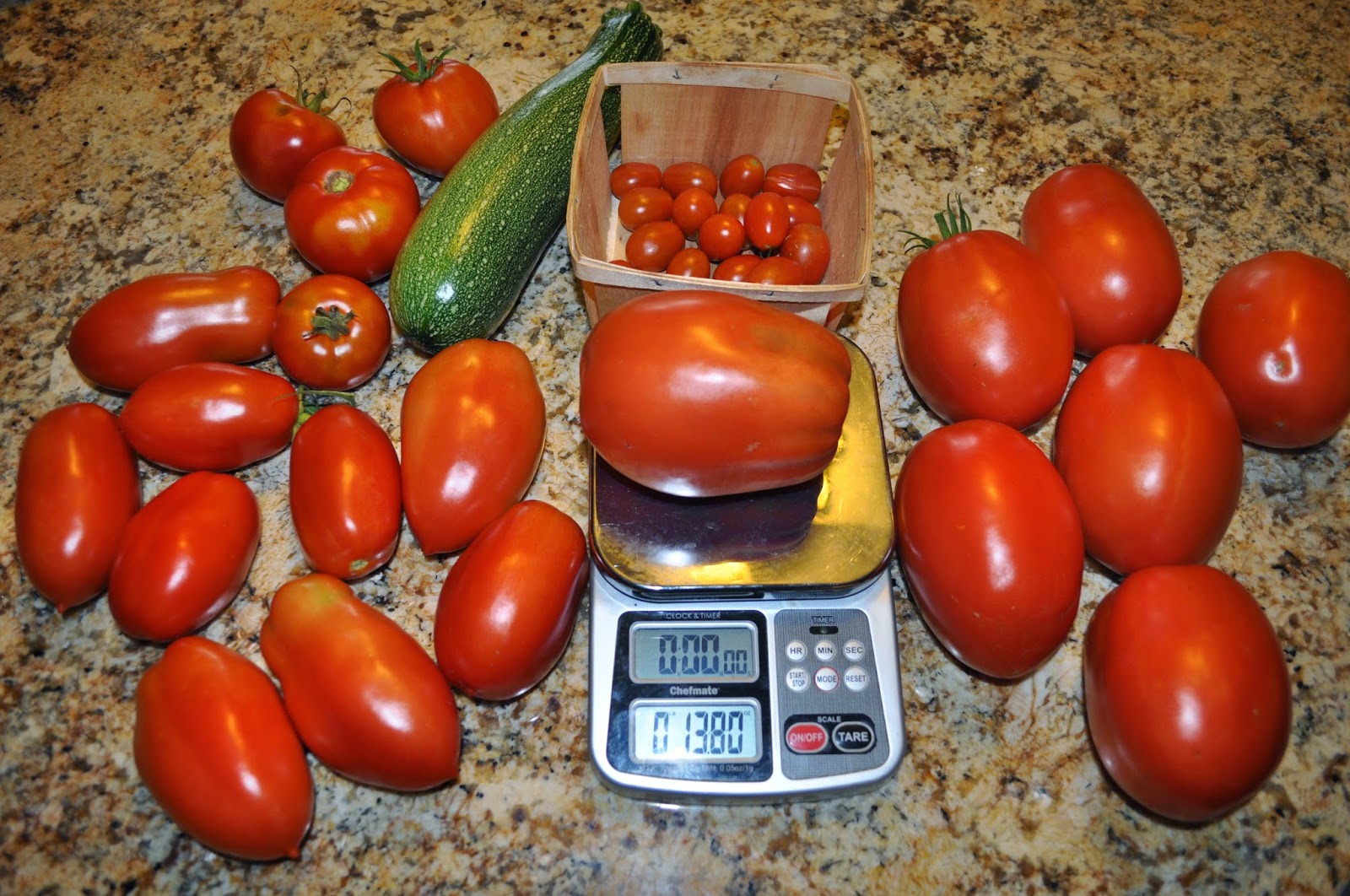 With all the accumulated tomatoes, it was time for The Kitchen Goddess to do the first hot canning of the season. Lucky for her the kitchen isn't too hot. She made 7 pints of rich tomato sauce, plus a pint each of pickled red and golden beets. 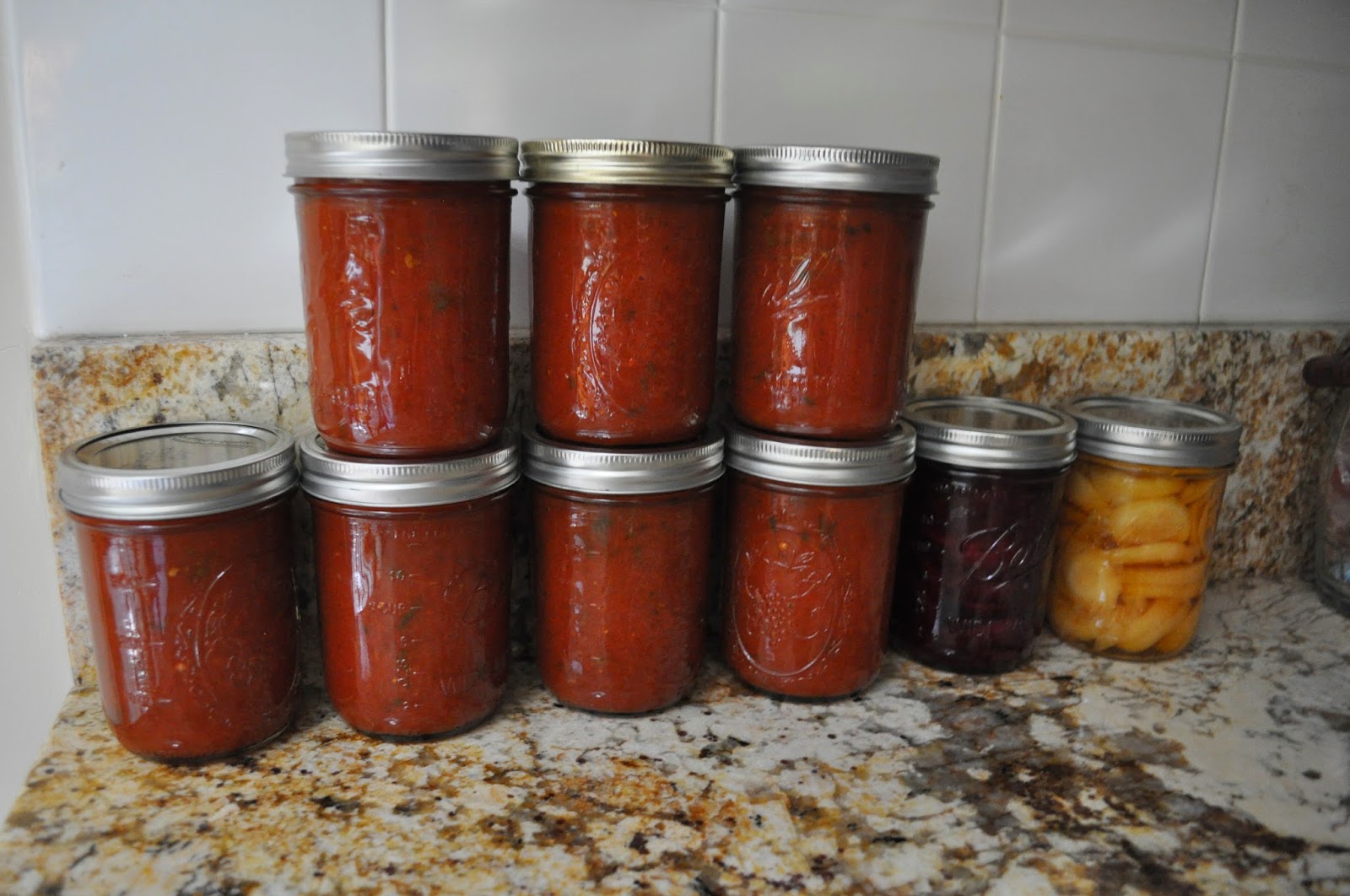 This is a tough year for tree-fruits for us. Here's a photo from last year at this time, showing how loaded the green apple tree (Granny Smith?) was: 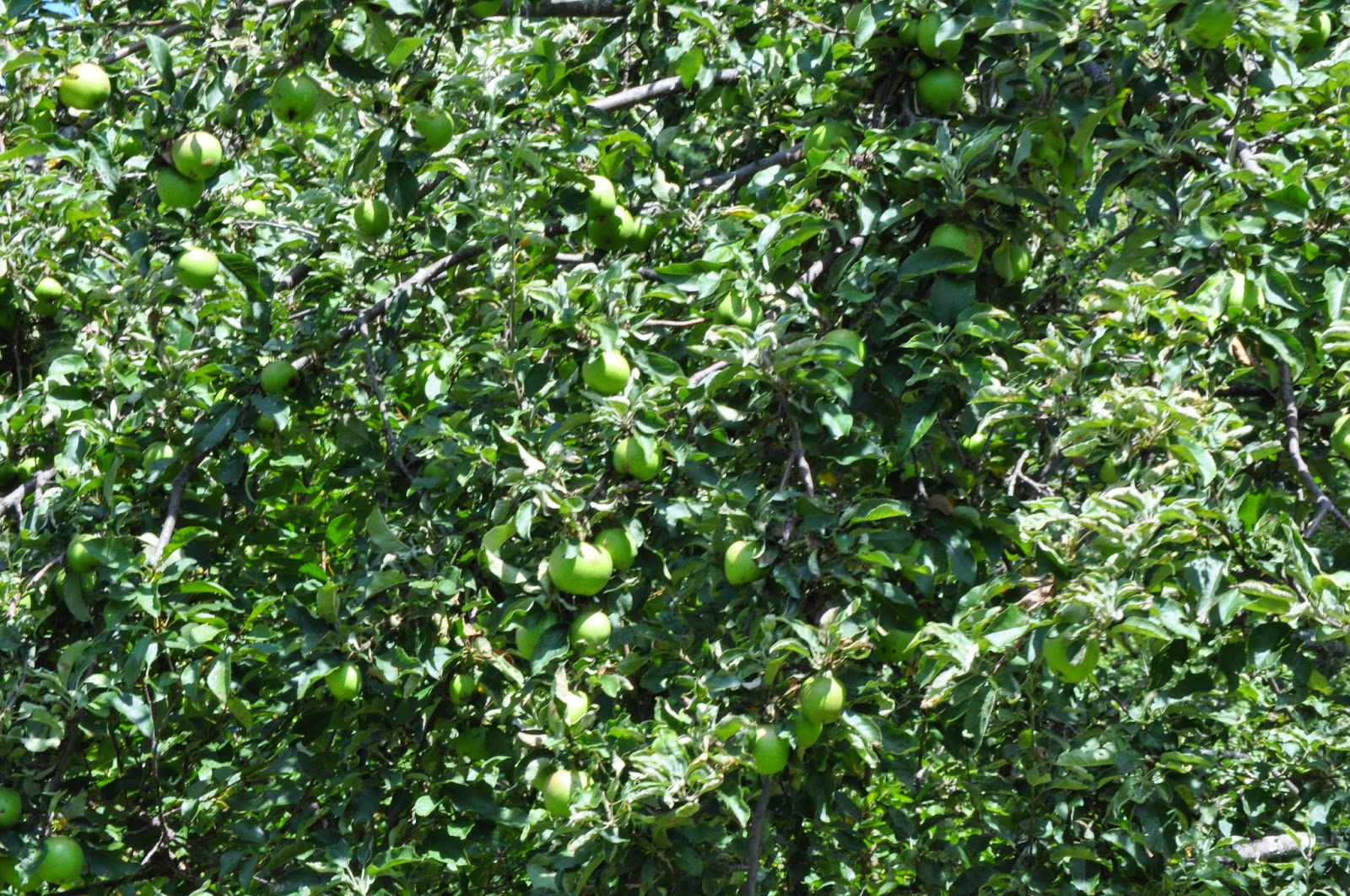 This year? Hardly any. Maybe it's one of those cyclical things. Just look at the total harvest of pears for this year: 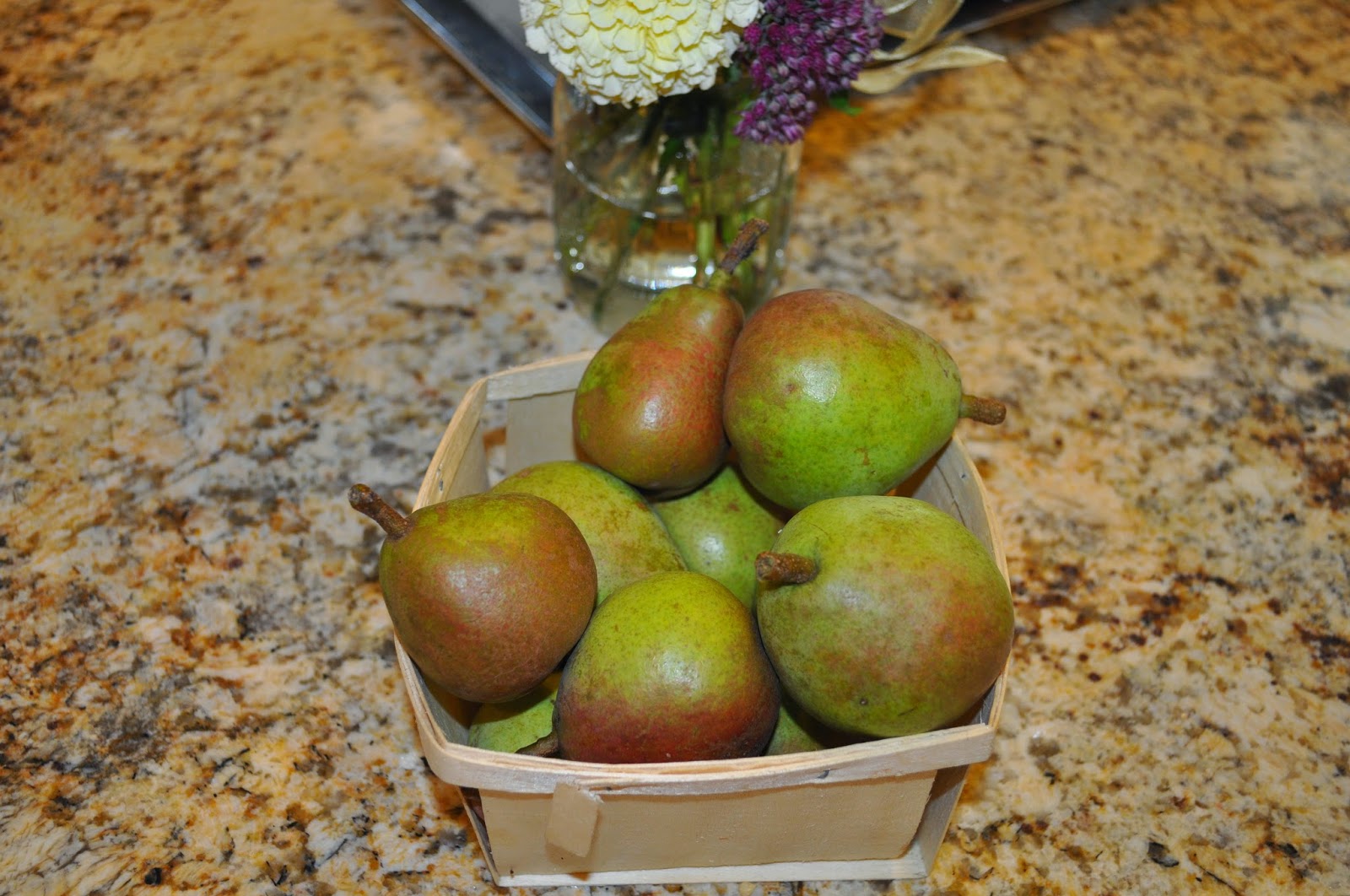 Pretty sad. Only 9, and they're not much bigger than figs.

Grapes are another story. Last year we lost almost the whole crop to black rot. This year looks to be much better. Better canopy management is helping, as well as frequent applications of (non-organic, sorry) fungicide. Almost time to dust off the fruit press and other winemaking equipment!

Sunday's picking was more tomatoes, eggplants, and our first hot cherry peppers. I usually grow "Cherry Bomb," but this year I tried an improved variety of that, "Big Bomb." They live up to their name. Also a handful of grapes we will keep in the fridge until the rest ripen. Many of the vines came with the property when we bought it, so I'm not entirely sure which is which, but there is supposed to be some Vanessa and Canadice, good for both table and wine. 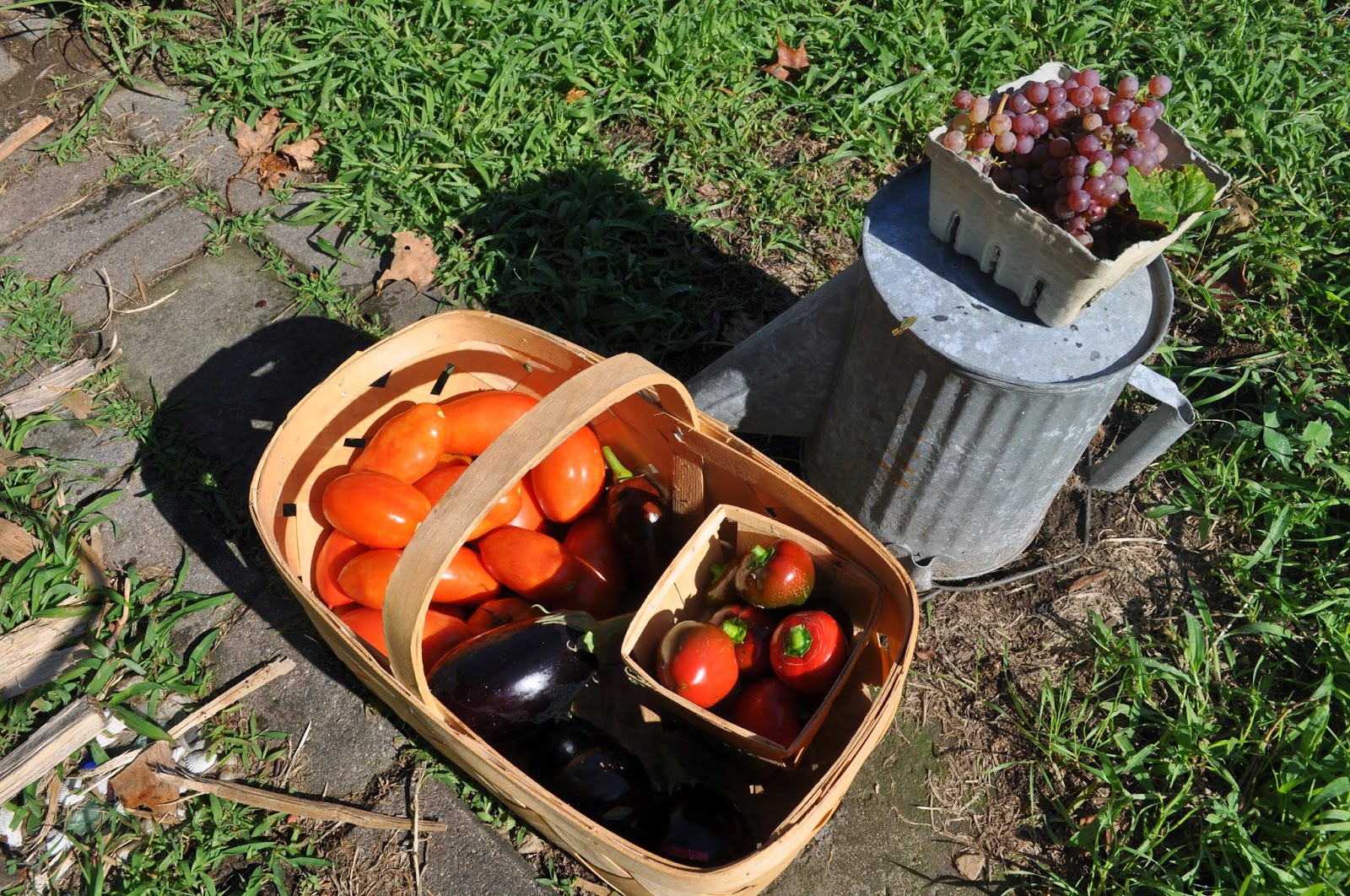 I'm now 100% convinced growing Chinese cabbage is better in the summer. No problems with root maggots like spring-grown ones. Look at these beauties (var. "Soloist"), together weighing almost 4 pounds: 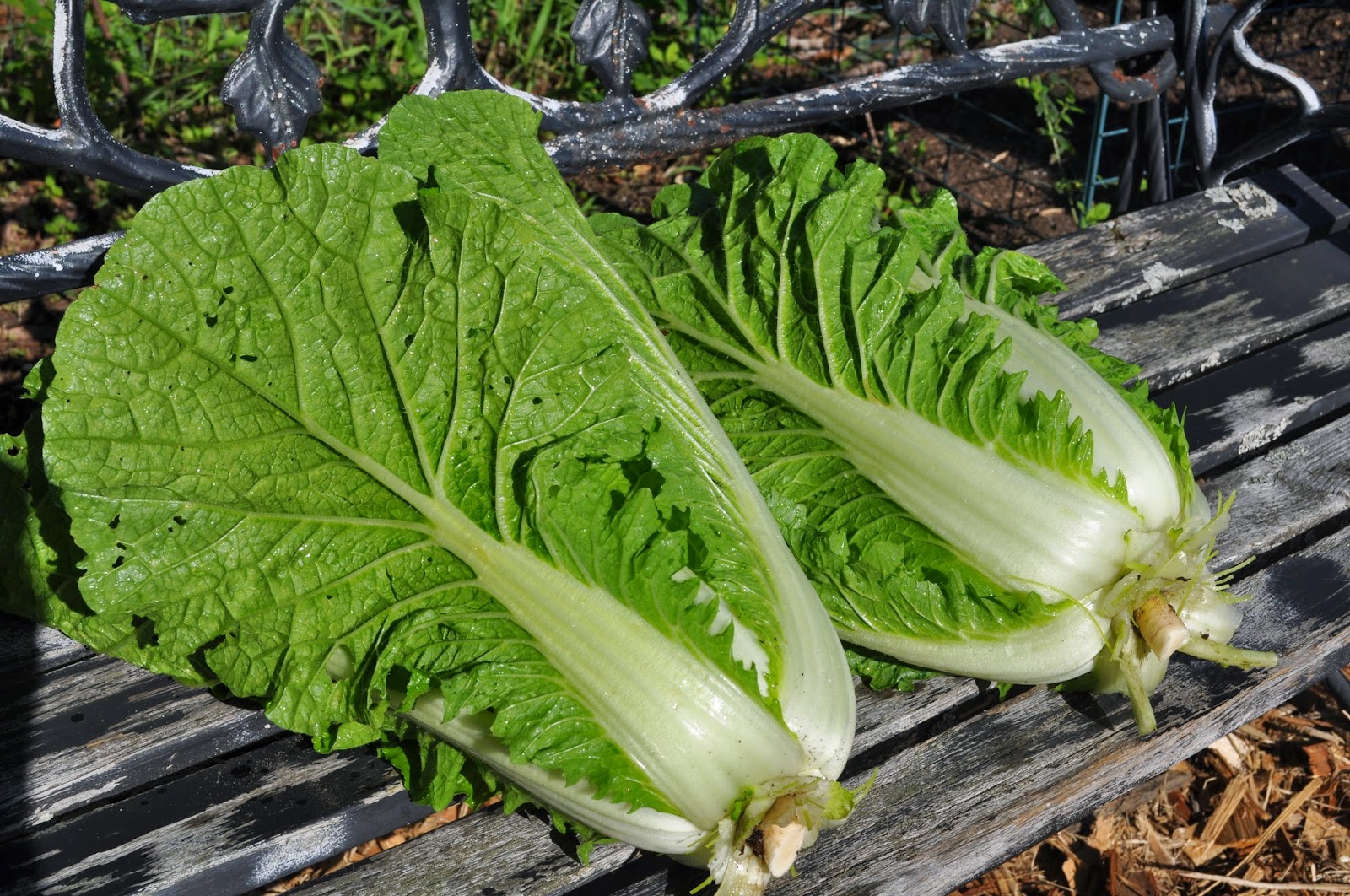 The first picking of "Honey Select" sweet corn. It should be all yellow. It's an 80-day variety, and I planted it June 1, so it should be mature, right? Well, it doesn't look it. Next time, take only 2 ears at first! 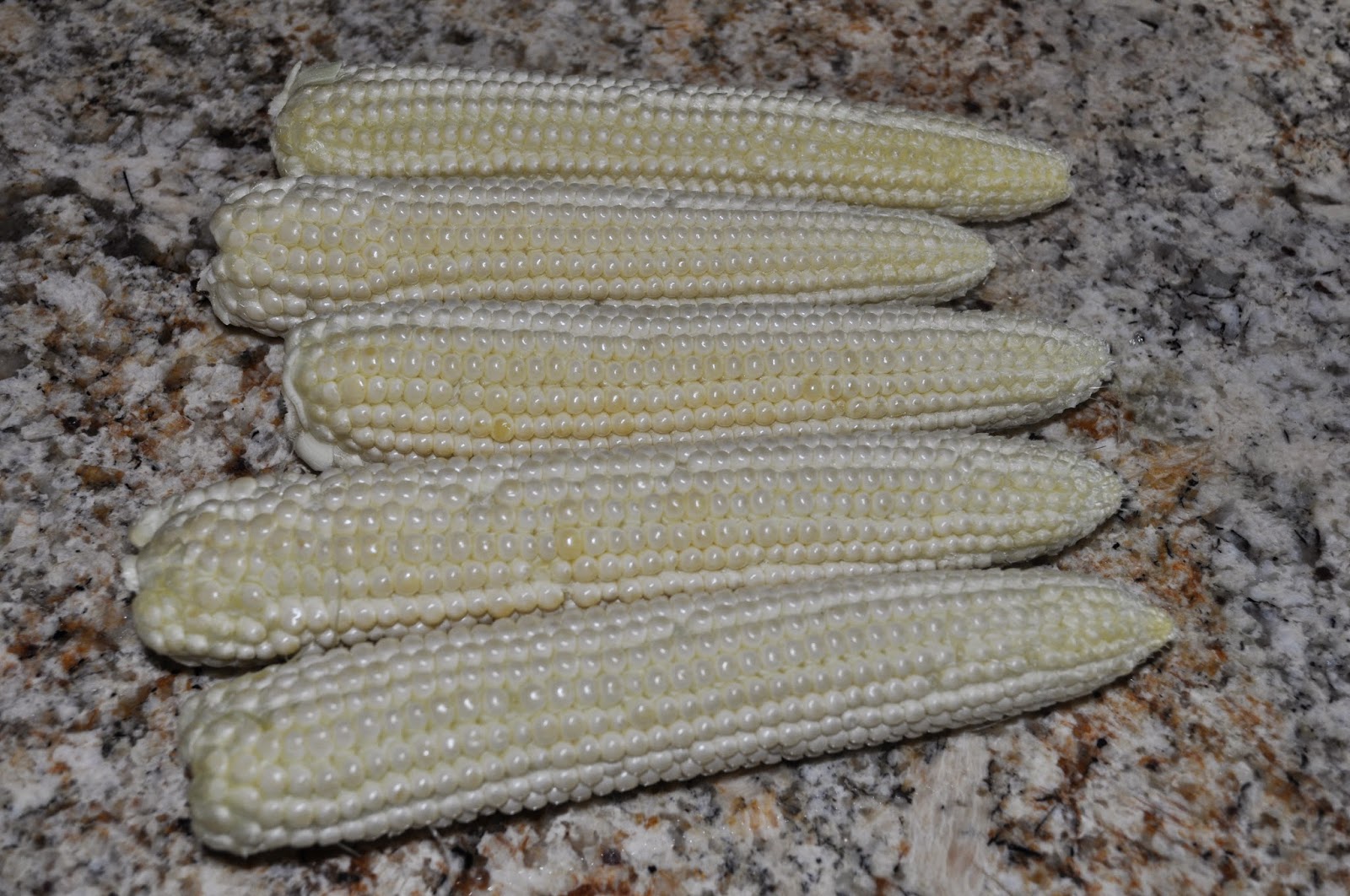 And finally, the star of this week and maybe the season! Our first-ever artichoke! Yeah, I know, this is August. To read about my struggles growing artichokes, please see my post Artichoke Joke. And guess what? There's another tiny bud forming! 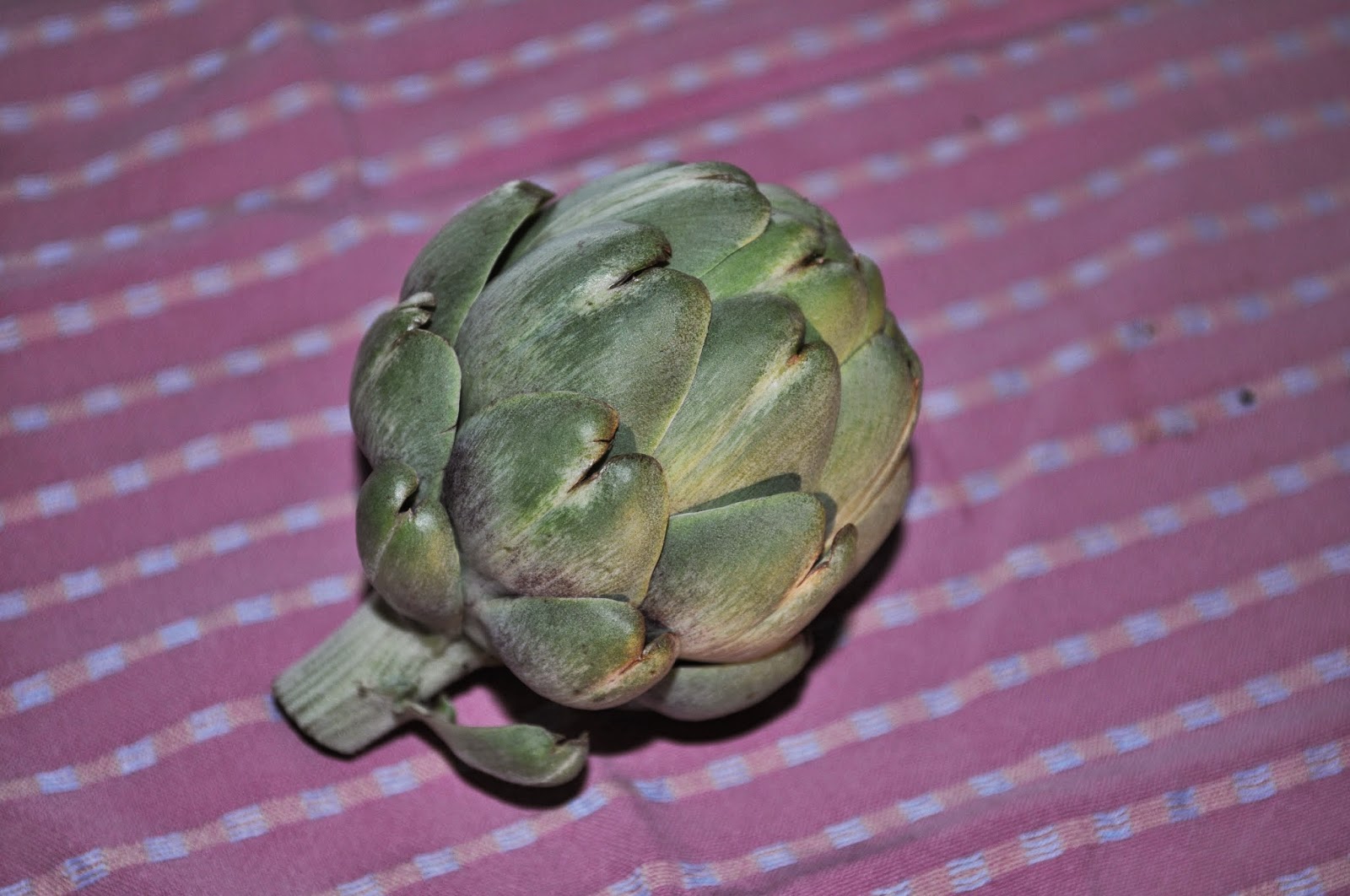 Until next time, thanks for reading, thanks as always to Daphne, and happy harvests to all!
Posted by Eight Gate Farm NH