Welcome to another Harvest Monday at Eight Gate Farm, brought to you by Daphne's Dandelions.

Looking back over the pictures for this week, I was struck by how much less the color green is present in the harvests. This is normal, I suppose, for the things I like to grow.

To start us off, some "Detroit" beets and "Danvers" carrots, both starting to size-up (my beets always seem to take longer than promised). 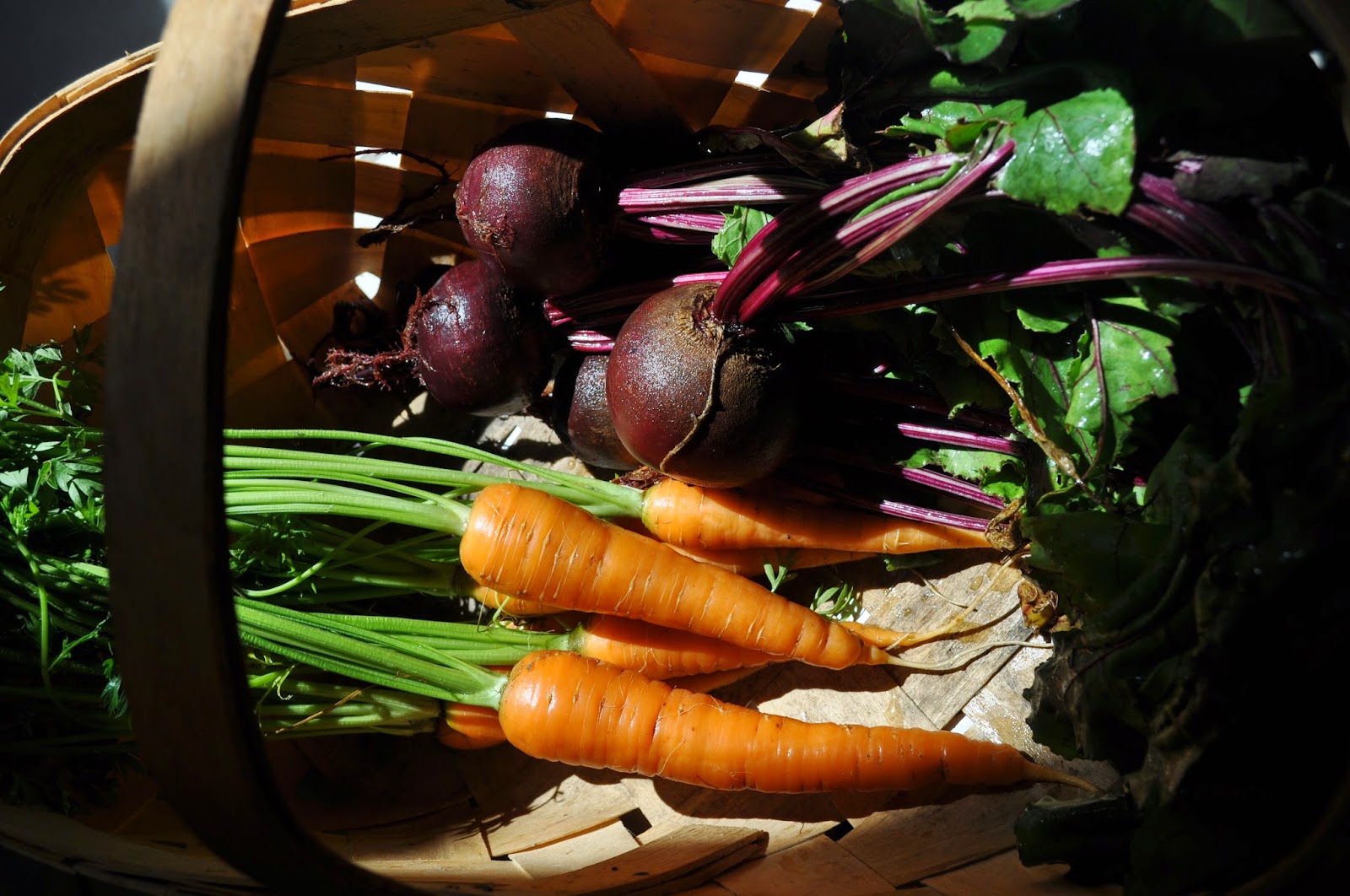 The Kitchen Goddess took them and made a quart of her favorite thing, pickled beets. It's neat that all the ingredients, except salt, were our own: beets, onions, maple syrup, chive-tarragon vinegar. 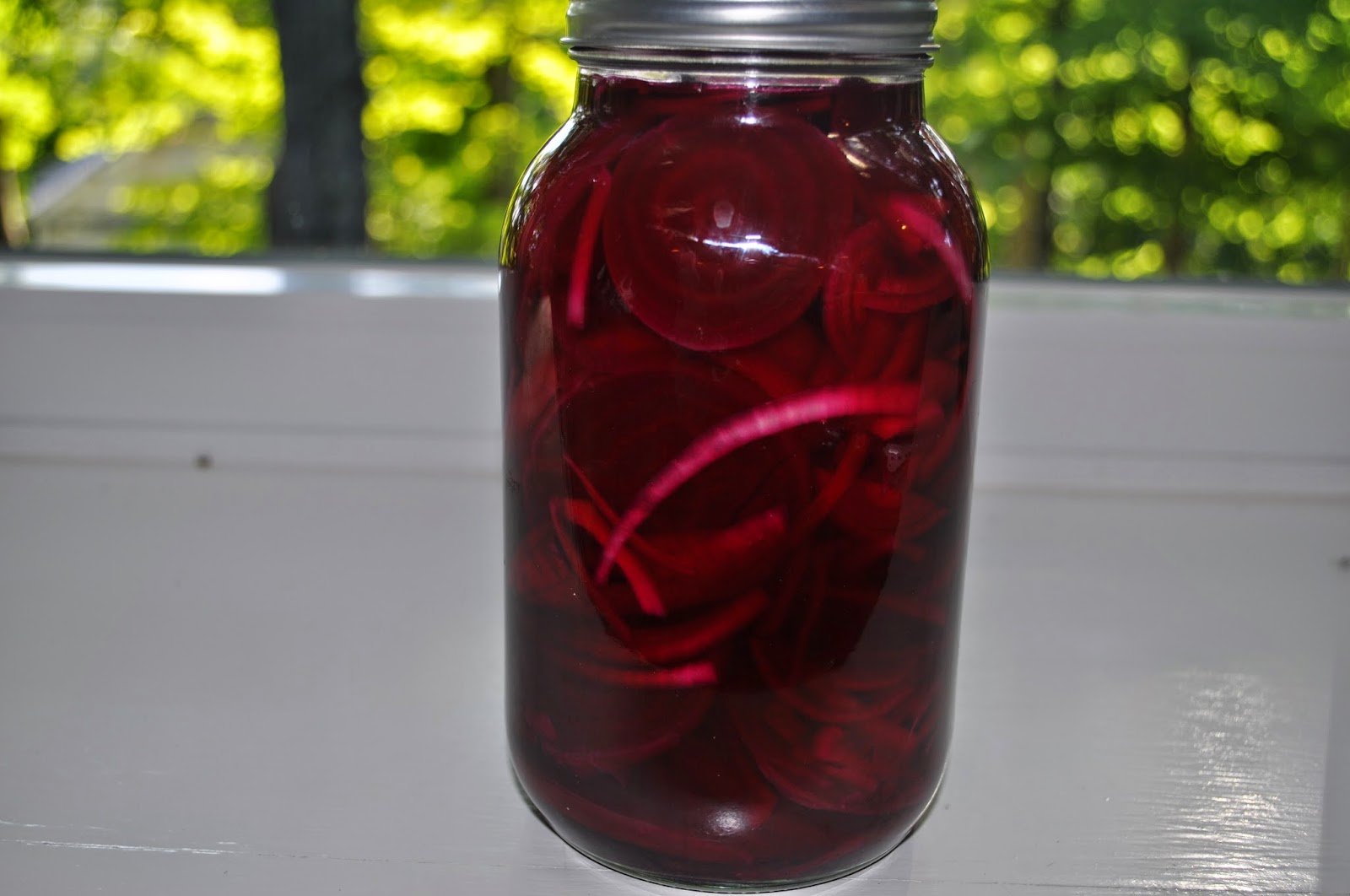 ﻿
﻿
﻿
A recent picking of tomatoes, with some blueberries thrown in (they are winding down).
The paste tomatoes are the "Incas Hybrid" variety I like to grow for their size (about 4 ounces) and vigor. The heirlooms are Caspian Pink and Rutgers (the smaller one). Of course the grape tomatoes (Sugar Plum) are giving us a picking every day. 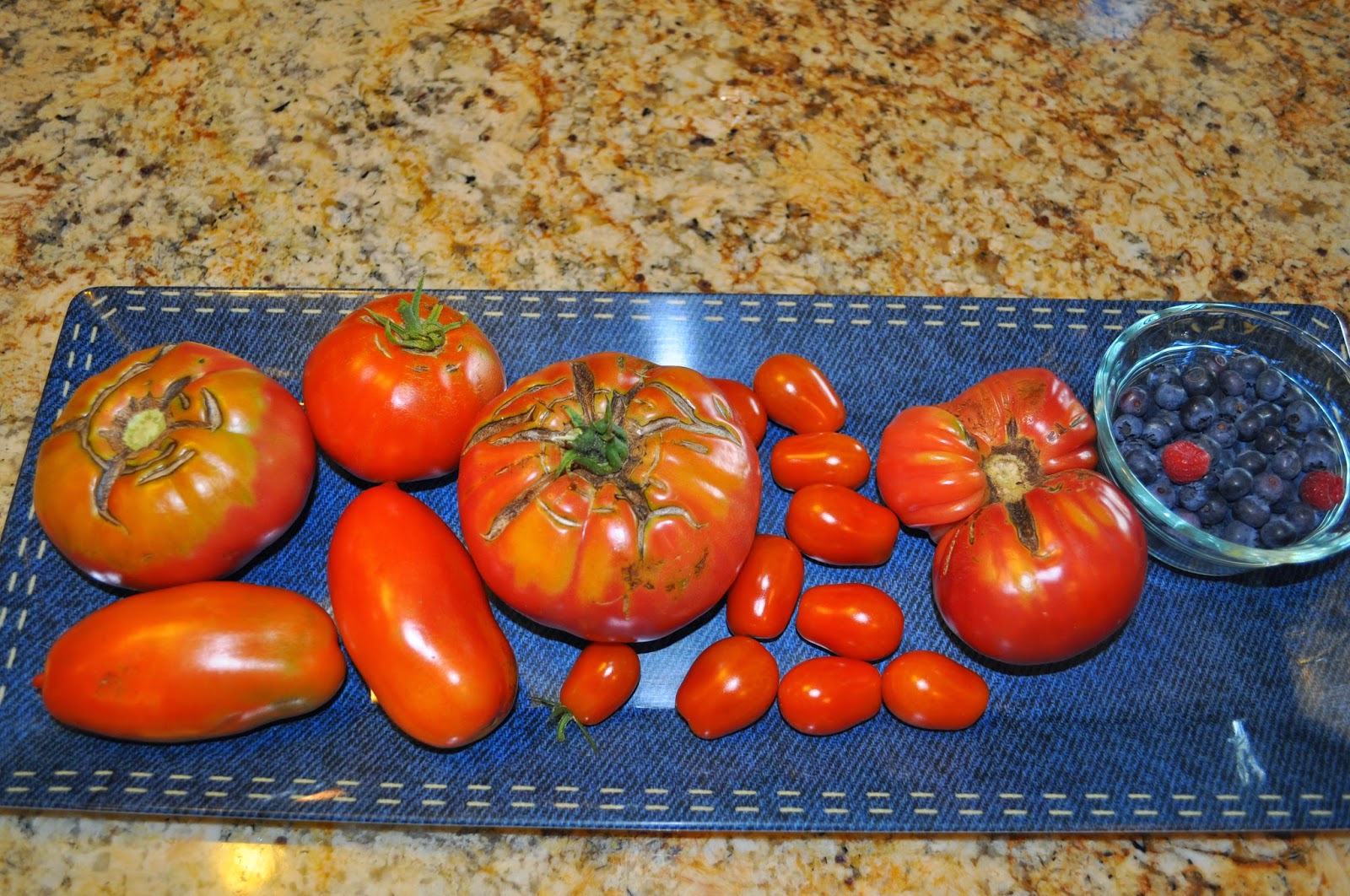 Oh by the way, last week I said I was experimenting with picking an heirloom on the pink side and ripening it in the kitchen. Here you can see that so far it makes little difference--the one by the blueberries was last week's, while the others, which were the same ripeness last week, came straight from the vine.
Couldn't resist robbing the Kennebec potatoes again, my turn this time. It's so much fun; like a treasure hunt! Just a foot or so into a row revealed almost four pounds' worth, including the over-achiever on the scale tipping at just over a pound. 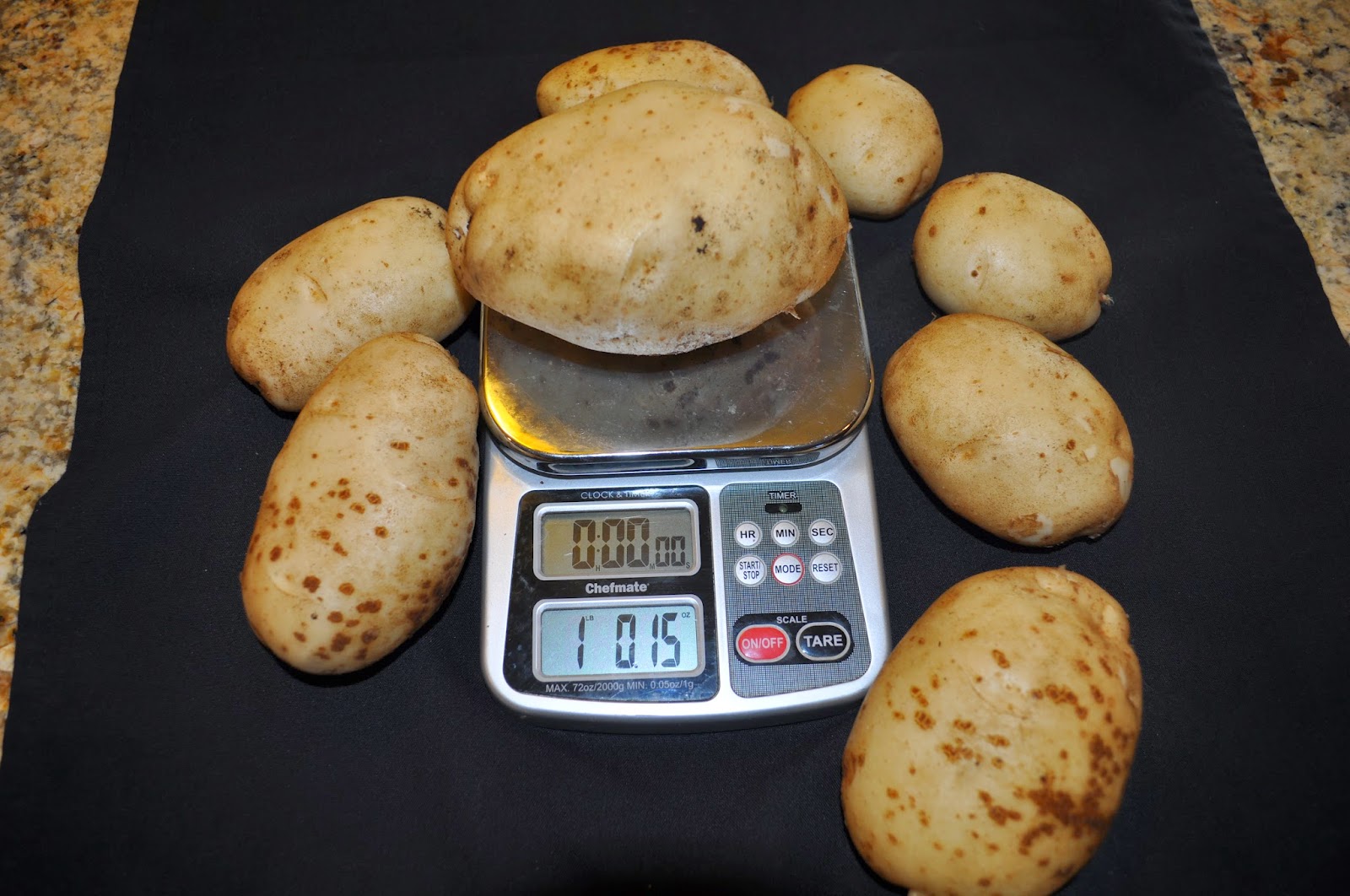 A couple of more "Amadeo" eggplant, and our first pepper. I apologize to Fedco about mislabeling--it definitely is "Chocolate" but not a bell, at least not this one. 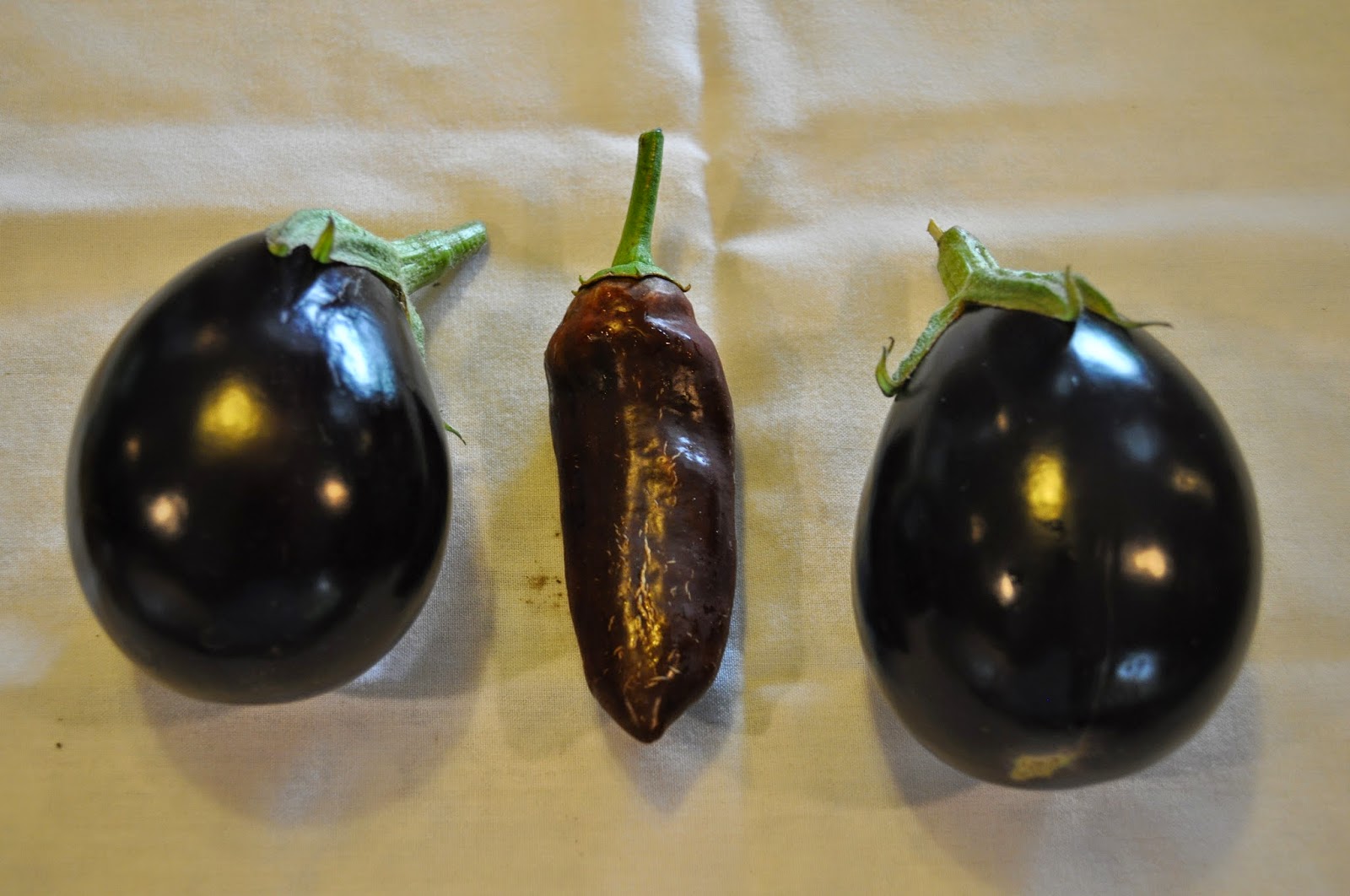 An end-of-week picking of more tomatoes: 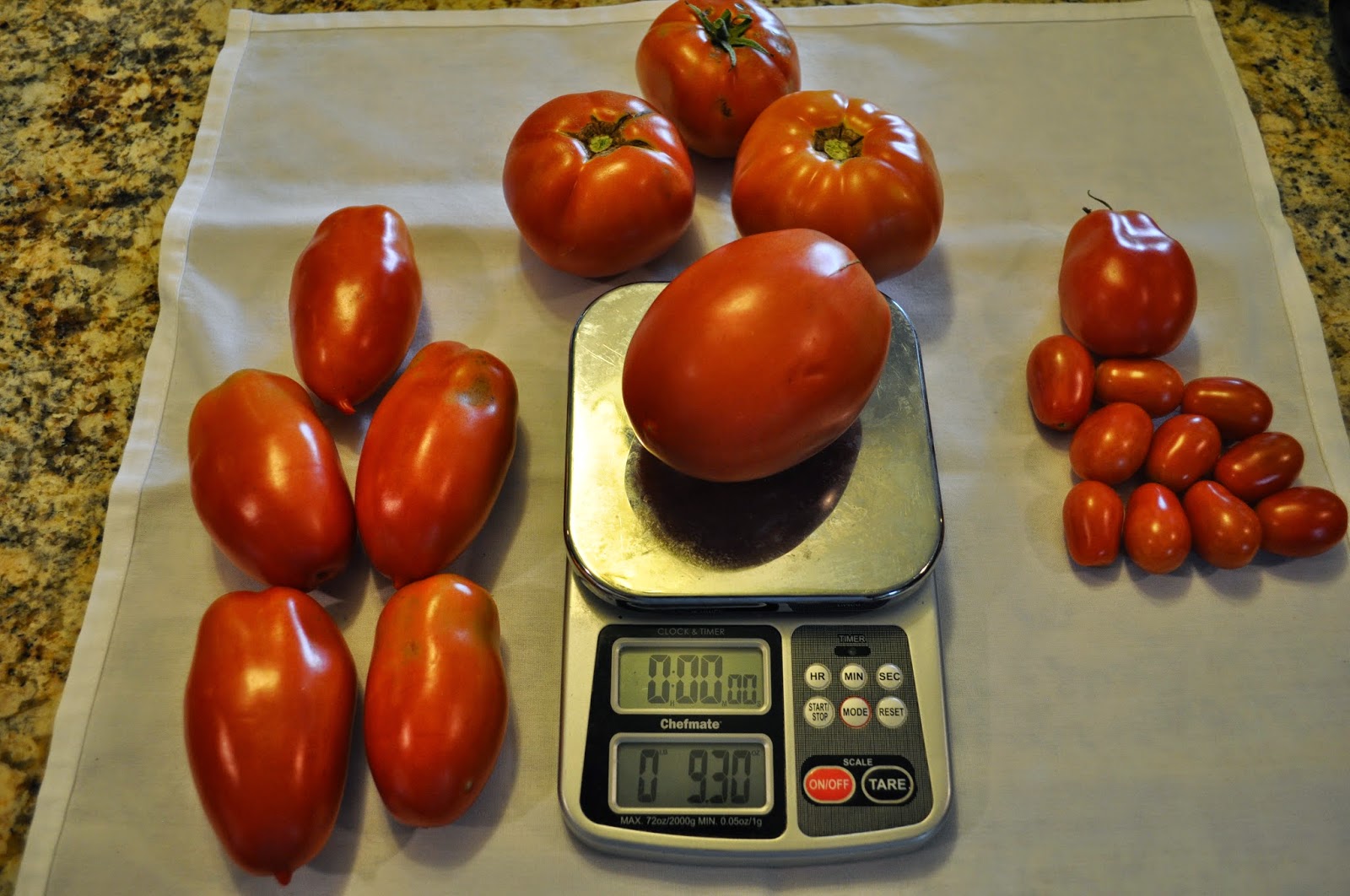 On the left are Incas, at the top Rutgers, and a lone Roma with the grapes. On the scale, weighing 9.3 ounces, is a "Supersauce Hybrid." I admit to being suckered in by the Burpee hype: "Two-pound sauce tomatoes! One jar per tomato!" Well, it is respectable, but not what they teased me with. Granted, they probably grow them in ideal conditions.

Oh all right, you talked me into it. Beans and zucchini: 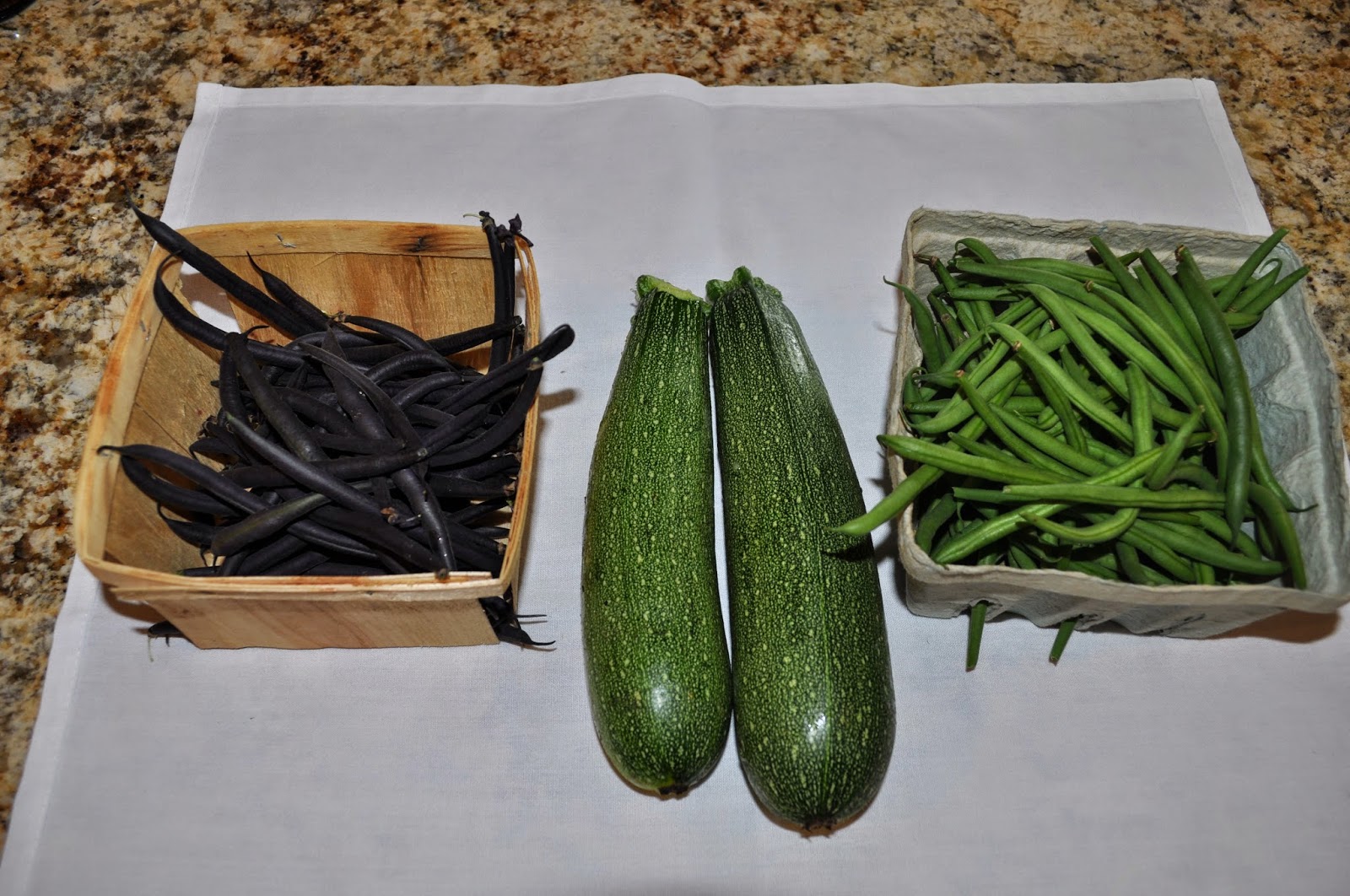 Last year I planted a free trial packet of "Sunny Babe" sunflowers on the border of the kitchen herb garden. I was pleased with their pale-yellow flowers, and short, multi-branching habit. So I harvested and saved some of their seeds. I guess they were a hybrid, since while the habits are the same the flowers are quite different. Still nice though. That's it for this week. Thanks for reading, thanks to Daphne, and happy (and more green) harvests to all!
Posted by Eight Gate Farm NH