The harvests are slowing way down, and this is reflected in the small number of "first" or new harvests for the season.

I pulled the whole crop of "Red Marble" hybrid onions. I started these from seed. They are shown below on the right, next to the last of the "Stuttgarter" onions I also started from seed. Now the only thing left in the allium bed is leeks. 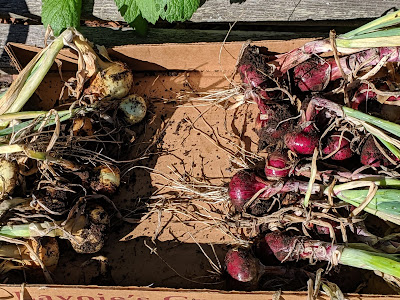 I also picked the entire crop of scarlet runner beans. They will dry on this rack, and when ready, I will save some seeds for next year, and the rest should give us a meal or two.

I obtained some pepper seed packets from a gentleman who had saved the seed. The packets were marked with the year 2000. So I had little hope that 19 year old seed would germinate. To my surprise, they sprouted beautifully. Below are two different ornamental but edible peppers. On the left is Bolivian Rainbow. The fruits start out deep purple, then change to shades of red, orange, and yellow. I took a tentative nibble out of one, and found it to be spicy but nicely fruity too. So I popped a whole one in my mouth. I literally started drooling from the heat! On the right is Poinsettia, another very attractive plant. I haven't tried one yet, but they are supposed to be quite hot too.

Another packet I got from the gentleman was labeled "Congo Trinidad." This is a habanero-type, with extreme heat. But what came up is clearly not what was labeled. It looks more like a shishito. But I was scared to try it. Eventually I manned-up and ate one, carefully removing the seeds and ribs. It was hot, to be sure, but not (what I imagine) habenero would be. Can anyone identify it? The leaves are very yellow-green

Last year I grew a Manzano pepper plant from seeds I obtained in California. The is a C. pubescens species with black seeds and purple flowers. I didn't get any fruit last year, but decided to overwinter it indoors. It developed a terrible infestation of whiteflies, so I removed it from the indoor growing area way before it was warm enough to put peppers out this year. Surprisingly it survived and bounced back. Here's one of the fruit, another terrifically hot pepper. 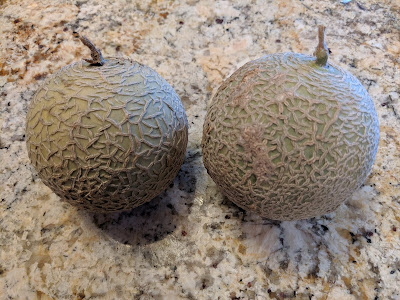 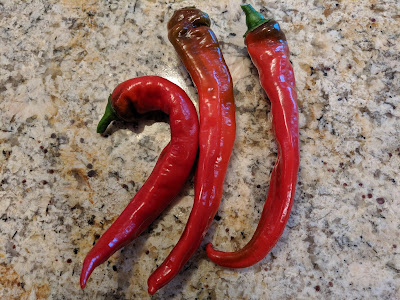 An assortment of hot peppers:

From The Kitchen Goddess's community garden plot came this tower of tomatoes. Her tomato plants are doing a lot better than mine at home. Under them you can see three small but tasty artichokes. 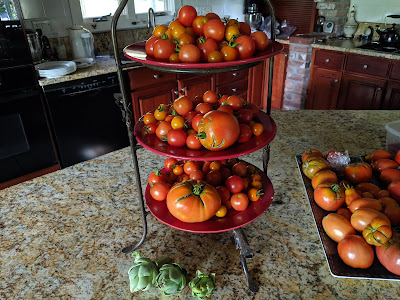 And later in the week, three more artichokes came home.

Those complimented a large shishito pepper harvest we enjoyed that night. Actually it was too many for us, so we shared them with TKG's mom.

As I mentioned, my tomato plants are not doing well, but that's a story for another time. Thank you for reading, and thanks as always to Dave at HappyAcres.blog for hosting Harvest Monday.
Posted by Eight Gate Farm NH