Happy autumn from Eight Gate Farm! The week started quite cool, but as the weekend approached it began to warm until summer returned! This was good for ripening some of the peppers that had been stubborn. So I'll start with these "first harvests."

Mad Hatter hybrid pepper. Some say it has some heat, but I haven't yet noticed it. I love the shape.

Paradicsom Alaku Sarga Szentes pepper. This is the second year growing it, and the results are no better than last year. Its lack of productivity will cause it to fail to make the cut next year. At least I won't have to deal with that complicated name anymore.

Syrian Three-Sided pepper, another selection from Baker Creek. Some of the reviews say it's hot, others say not at all. One reviewer said it was prone to blossom-end rot, and that is certainly my experience. Another one that won't make the team next year.

Another pepper from Baker Creek will make the team. This is Arroz Con Pollo. It is described as a Cuban "seasoning" pepper, and one is supposed to be sufficient flavor a whole pot of beans. Of course, it is also used in its namesake, rice with chicken. I'm looking forward to trying it both ways.

Now on to continuing harvests, and I might as well stick with the pepper theme. This is one picking of Anaheim. We stuffed and smoked some like we did with poblanos (now finished), and they were quite good, with some kick that poblano lacks. Still, we couldn't use them all. I'm not really sure how I ended up with 5 plants, but that certainly can be pared down next year.

In this picture, the top row is King of the North bell, Tangerine Dream, and Cornito Rosso. Middle row is red and yellow biquinho, and bottom is half of one-day's harvest of shishitos. The other half went home with an unsuspecting friend who dropped by. 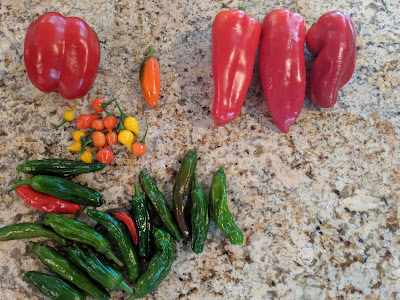 Now something besides peppers. The Kitchen Goddess visited her community garden plot, and came back with this welcome supply of tomatoes, welcome because mine are doing poorly. 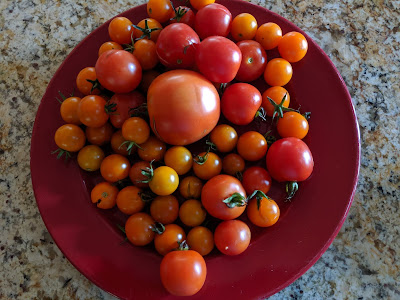 She's also been braving our raspberry patch every other day. They are beautifully ripe and big. 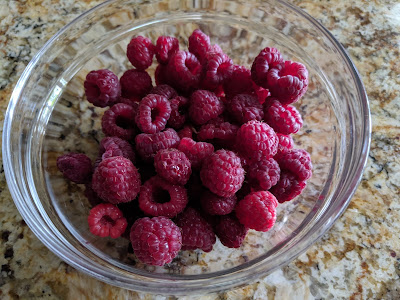 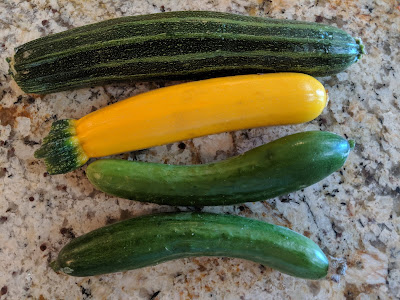 All in all, not a bad week. I hope yours was too! I'm looking forward to reading all about it at HappyAcres.blog, kindly hosted by Dave.