Welcome to another Harvest Monday update from Eight Gate Farm. It’s still summer, and nothing says “summer” like bringing in some winter squash!

This is “Hunter,” a hybrid butternut that is touted as extra-early with compact vines. As you will see, it is not much earlier than my others, but it did make more. They are in the one to two pound range.

This is “Butterscotch,” another hybrid butternut that Johnny’s says is their “proudest butternut achievement to date.” It’s an AAS Winner. Compared to Hunter, the fruits are more uniform and blockier.  They are about two pounds, which makes them “personal size.”

Definitely not personal size is this beautiful 8 pound 3 ounce neck pumpkin, also called Pennsylvania Dutch Crookneck Squash. Unfortunately this is the only fruit the vine will give us.

Here are two yellow non-hybrid spaghetti squashes, from a plant I bought at a plant sale. They are about 3 pounds each. The one in the rear looks like it has lettering on it. Maybe the chipmunks have learned to write.

Here is the entire harvest of Naked Bear pumpkins. These are grown mainly for their hull-less seeds, but the flesh can also be used. They are in the two to three pound range.

And quite a few more Sugaretti hybrid spaghetti squash were cut.

Except as noted, the squash will give us many more fruits before the season ends. Looks to be the best year ever for us.

Here’s an interesting melon called “Lilly.” It’s a hybrid Crenshaw-type bred by Johnny’s. The flavor is quite good, like a cantaloupe but with some citrus notes. We liked it a lot.

Over in the tomato department, the last two varieties to give us “first fruits” came in this week. First up is the beefsteak “Big Daddy,” another in the stable of Burpee-bred tomatoes with the names _Boy _Girl _Daddy _Mama. The flavor is good, but again not as rich as Brandywine. I know what you’re thinking…if they love Brandywine so much why don’t they just grow only it and stop boring us? Well, in prior years Brandywine was an extremely shy producer so I was looking for alternatives, and anyway, free seeds!

The other was Celebrity, a hybrid determinate slicer. One has a weird appendage. I grew this variety last year and was impressed with the flavor and hardiness. This year, since we have so many big beefsteaks, the smaller-fruited tomatoes will go into canning.

For a sampling of continuing harvests, more Anaheim peppers were picked, so more chiles rellenos were enjoyed.

Here is a sweet Cornito Rosso, the biggest to date, along with a sweet Jimmy Nardello’s, plus two fiery Serrano peppers. 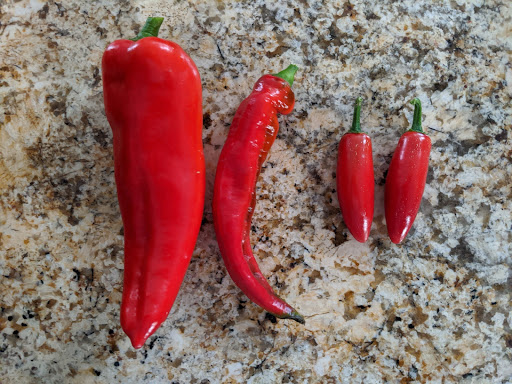 Here are some of the last filet bush beans.

On Thursday here was the scene in the kitchen. The wooden “boat” is filled with ripe paste and slicer tomatoes. The beefsteaks are off to the side. The Kitchen Goddess called it “Tomato Hell,” while I called it “Money in the Bank.” 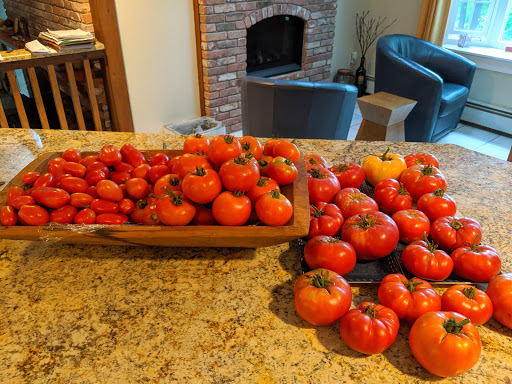 Saturday was cool and rainy (yay rain!), a good day to process all the non-beefsteak tomatoes. “We” made 9 pints of sauce. Only eight jars fit in the trusty old Ball canner, so one was put in the fridge for later. 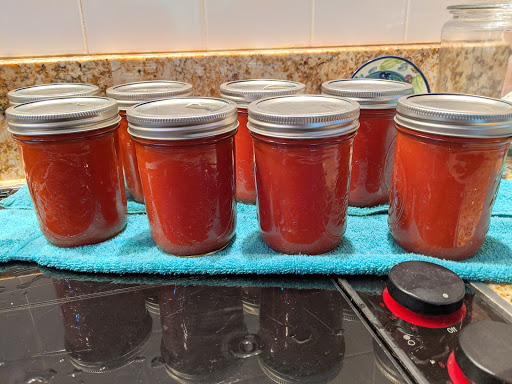 On Sunday TKG joined her mom at their community garden plot for their weekly work/harvest day. I felt ambitious and decided to try making sauce all by myself! I used most of the beefsteaks. I cored, chopped, cooked, put through the hand-crank food mill, and simmered the result down to desired consistency. I even washed the dishes! When TKG came home she took over the canning part. She does not trust me with breakable objects, like glass jars. Here’s the result…another 8 pints. 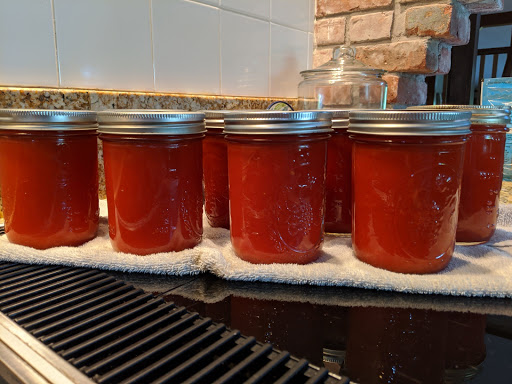 Here’s the harvest her mom went home with. Beautiful as always.

Once again it was the last weekend of the month, so time to document our vegetable gardens from my drone’s perspective. Here's the "Field Garden." Nothing edible really left in it now. You can see the drought's toll on the grass.

Here's the "Stock Tank Beds," which held the melons, cucumbers, and zucchini. Only the single remaining zucchini plant is going to give us more to harvest.
And here's the main fenced garden. It's starting to look kind of bare, now that the corn, brassicas, and most of the artichoke plants have been removed.
All in all, a good week! Hope yours was too. Thanks for reading, and thanks again to Dave at HappyAcres.blog for hosting Harvest Monday