Welcome to another Harvest Monday update from Eight Gate Farm. Happy Labor Day to all US residents!

We’re still getting “first harvests” of the year. Here are a couple of “Arapaho” peppers, a hybrid cayenne. The plant was given to me.

Here is the first harvest of “Arroz Con Pollo” peppers. This is described as a "seasoning" pepper, and it really is! I chopped one up to add to a pot of black beans, and it perfumed the kitchen. It’s hard to accurately describe, but the scent reminded me of freshly-ground peppercorns.

Here’s another seasoning pepper, or at least that’s how we’re going to use them. It’s “Alma Paprika.” We will definitely dry and grind them for paprika once we get enough, but we can’t decide whether or not to smoke them first.

Here’s a new-to-me hybrid Poblano pepper called “Baron.” It’s a little confusing, because there is a sweet bell pepper also by that name. Of all the Poblano-types I’m growing this year, this one is later but with significantly larger fruit. This plant also was a gift.

I also picked the first red-ripe “Mad Hatter” peppers. We’re adding this to the store of sweet peppers, but they can have some heat along the seed cavity.

For continuing harvests, we got a nice picking of Poblanos and jalapenos, and some more Sugar Rush Peach peppers. 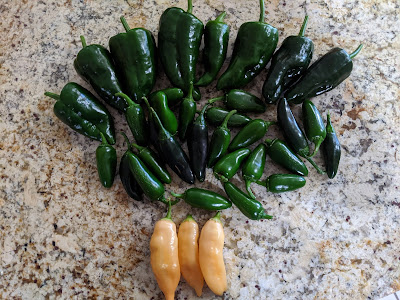 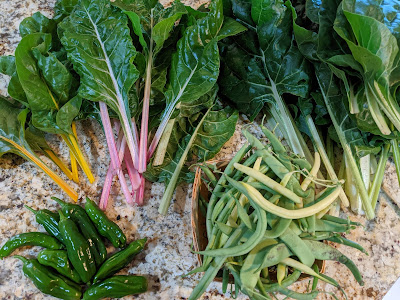 This is the entire harvest of Kenearly Yellow-eye beans, now fully dry and ready for storage. It was more than I was expecting, but much less than I was hoping for. Still, enough for a few good winter meals. 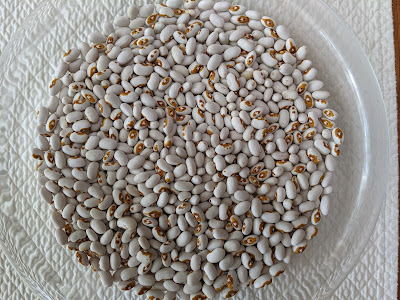 I’ve mentioned many times that The Kitchen Goddess and her mother share a community garden plot. What I don’t think I’ve told you is I’m actually the manager of the garden, both in my capacity as a member of my town's Conservation Commission (the garden is on the grounds of one of our conservation areas), and also as my Master Gardener Volunteer project. You may be interested that here plots are free but reassigned every year, unlike many other community gardens or allotments.

Late in June one of the gardeners chose to give up her plot due to frustrations with the rabbit situation. Since I would then have to take over weeding it, why not try growing something? So on June 23 I planted four 4’x4’ squares with sweet corn. I’ve never before tried planting it so late in the year. I’m glad I did!

Here’s a sample harvest of the bi-color variety “Temptress.” I grew this at home, and was very disappointed with the pollination—only half at best of each cob had kernels. TKG believes the tropical storm that came through just at pollination might have scattered the pollen too far. But with this planting, no such problem! Wonderful tip-fill and large, full cobs.

And here’s a sample of the all-white variety “Illusion.” But not quite all-white! Because both varieties were planted closely together at the same time, with similar maturity dates, there was a certain amount of cross-cultural romance. Doesn’t matter to me, they too are fantastic.

If you can’t tell by now, I’m a bit of a sweet corn fanatic.

Once again I close with a picture of the weekly harvest from TKG’s plot. Her mother really enjoys working at the plot and going home with these bounties. 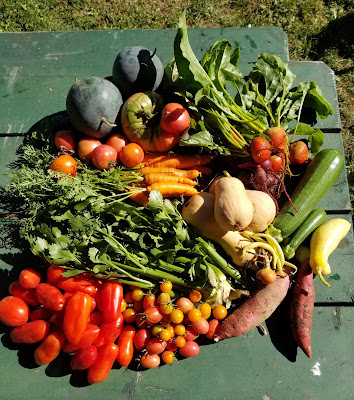 That’s all for this week. Thanks for reading, and thanks again to Dave at HappyAcres.blog for hosting Harvest Monday.