Hello again from Eight Gate Farm. Our only harvests this time of year are asparagus, with weekly cuttings that look like this. Just enough for the two of us. 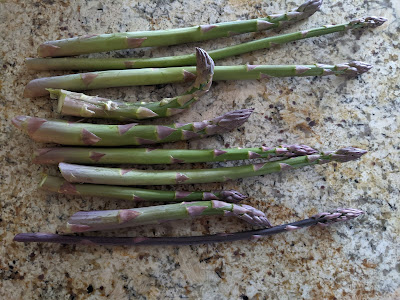 But things are moving along planting-wise. Still way too cold for tomatoes, etc., but the brassicas are planted, and other seeds sown. The radishes, lettuce. and peas are up already, waiting for some warmth to take off. Carrots, beets, and chard were sown this week.

This is the “Field Garden.” When we moved here, it was a roughly oval patch of large gravel and weeds where an above-ground swimming pool had been. At least the site had water and power! I had a big load of loam brought in 2014 and turned it into a crop field. A few years ago I stupidly spiked the pH by spreading too much wood ash as well as using the site to burn brush in the off-season. No more of that. I’m hoping that it will return to normal pH soon. 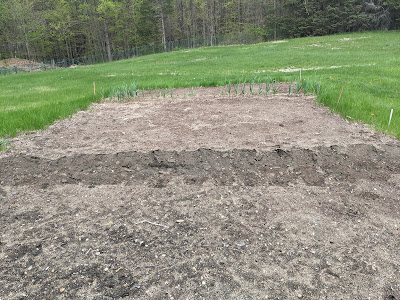 In the foreground you can see where I planted a row of potatoes this past week. Beyond that is a row of garlic, doing well, mostly. The middle part is Russian Red, and it is not doing as well as the flanking plants of Georgian Crystal and German Extra Hardy. I got the seed bulbs from Fedco last year, as for obvious reasons there was no Vermont Garlic Festival to attend and buy direct from the growers. The Russian Red bulbs had a lot of white mold on them and I had to throw away quite a few cloves. I guess what I kept wasn’t that healthy either. No knock on Fedco; they promptly refunded me for the bad ones. These things happen.

Beyond the garlic will be a row of short bushy sunflowers, and a row of Mammoth Russian. I love tall sunflowers, and I am hoping to win first prize at the Deerfield Fair for the tallest sunflower! A man can dream at least.

Also going in this plot will be a 4’x8’ patch of Painted Mountain flour corn, several rows of yellow-eye beans, and some field pumpkins. I’m hoping for a good year of rain to ease the watering chore.

That’s it for this week. Thanks for reading, and thanks again to Dave at HappyAcres.blog for continuing to host Harvest Monday.