Time for another Harvest Monday update from Eight Gate Farm. We had two days this past week where the air quality was unhealthful, courtesy of the severe western fires. Otherwise it was on the cool side, with frequent rain. A lot of good harvests were made, however, and I'll lead off with the "first harvests" of the season.
This is Romanesco. Is it a broccoli? A cauliflower? A sea creature?
I've always admired its beautiful fractal patterns, so I tried to grow one plant this year. This variety, sold by Johnny's, is a hybrid, and differs from others in that it can successfully be grown in the summer; in other words, I could spring plant it along with the other brassicas. The plant got huge! The seed was expensive, even by Johnny's standards, but worth it! Even the taste is different...like a cross between broccoli and cauliflower (but not sea creature). We really enjoyed it.
A more conventional brassica first harvest is Flame Star cauliflower. I cut three in all this week. The Kitchen Goddess riced them, which is apparently the rage in healthy eating these days. Rage or not, we like it and use it quite frequently, and it's nice to not have to buy it.
The solanacea are tardy this summer, but some are starting to ripen. This is Glacier, a early, determinant, open-pollinated, saladette tomato. I tried it last year, but the seeds never sprouted. This year they did, but the plant is weak and will not give us many more. And the taste is just average. So, weak plant, average taste, what's not to like? I doubt it will make the cut next year.
I had a lot of trouble in the pepper beds at the start of the season. Something, a vole probably, destroyed a lot of the plants I had started. So I was forced to buy some plants at the garden center. This is Jalapeno M, which I was unfamiliar with and looked up. Turns out "M" is the most widely grown commercial Jalapeno. By the end of the week there were enough to make a nice batch of poppers, which I smoked. They tasted great but were strangely mild. I'm guessing this has to do with the weather.
This is National Pickling, an old-fashioned cucumber variety I like.
I harvested a larger one later in the week and made a batch of my Asian-style refrigerator pickle, using rice wine vinegar, tamari, and a dash of sesame oil. In just a couple of hours it's ready.
I also judged the red-skinned potatoes to be ready, given that the vines were quite dead. I usually grow a small amount of Red Norland for an early potato, but the garden center did not have them and had substituted Adirondack Red. This not only has red skin, but also pink flesh. It's quite tasty. The main-season white potatoes need a few more weeks, I think.
For continuing harvests, artichokes are rolling in.
And here's a good representative harvest of other crops.
Not to be outdone, TKG shared this photo of the harvest from the community garden plot on the same day. All went home with her mother, who was thrilled.
Saturday found us processing vegetables for the freezer. I like to look back on photos like this to remind myself how lucky we are to have the space and physical ability to get so many nice things from the garden.
Lastly, as you can tell from her nickname, The Kitchen Goddess is a wonderful cook. She is also a very talented artist. Here's a project she did this week, painting a rock with a mouse emerging from a hole. It's super-cute, and startlingly 3D! It's serving as an eye-catching doorstop. 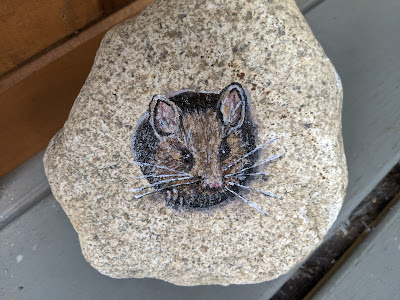 That's all for this week. Thanks for reading, and thanks once again to Dave at HappyAcres.blog for hosting Harvest Monday.
Posted by Eight Gate Farm NH