Hello again from Eight Gate Farm! Last July was way too wet; this year too dry. Practically the whole State of New Hampshire is in the Moderate Drought category. We can water the gardens, of course, but it's impractical to do the lawns and field, so they are browning.

Despite this, we are pleased with the fruit and vegetables we're getting. Once again I'll start with the new harvests.

The first shishito peppers were picked. This hybrid variety, "Mellow Star," has never once given us a hot one. We love them, but by the end of the season we grow tired of them as they are so prolific.

I judged another row of garlic was ready to pull. As I said when I pulled the first row, the row labels had worn off. But now I'm pretty sure the first one is Chesnok Red (it's purple-striped) and this one is Music (a porcelain type, white-skinned). It made fairly good-sized bulbs.

I've never grown radicchio before, but have always admired it in the seed catalogs. I've eaten it, but only as a component of salads when we dine out. I was told to expect bitterness, but I was okay with that, because I like mildly bitter greens like arugula and chard. But this...yikes! We lightly grilled it, took a few bites, and couldn't finish it. We'll have to try again.

I started six "Imperial" broccoli plants this year. Only four survived, which is not uncommon given our unpredictable spring weather. Normally I wouldn't harvest all four at once, but they all appeared to be at their peak.

I snapped off the first leaves from the collards. We don't cook with them much, but instead chop them, freeze without blanching, and add to our morning smoothies for extra nutrition.
Finally we are getting cucumbers. These don't look that great on the outside (probably cucumber beetle damage), but peeled they were sweet and delicious.
Blueberries made their first appearance. We're so glad to get them, having gotten exactly zero last year for an unknown reason. The Kitchen Goddess, being much smaller and much more nimble than I, crawls under the netting and does the picking.
For continuing harvests, we are getting a good amount of zucchini, which at this stage is still very welcome.
We cut several nice bulbs of fennel ("Florence Fennel" to some) this week.
I pulled quite a few bunching onions. We cut off the bottoms and froze them without blanching. The green tops TKG sliced and dehydrated to add to soup bases. I still have plenty more in the garden, because I grew, well, bunches!
The peas (mangetout) finished out this week. The Blue Wind broccoli plants continue to give us sideshoots. 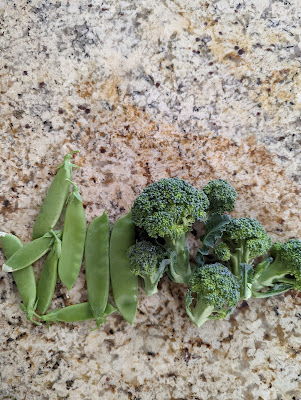 On Sunday TKG did a strong picking from the two salad mix rows. She also took another radicchio, this time removing all the outer leaves and leaving only the heart. We grilled it, and it was lovely, no bitterness at all. That makes me happy, as the plant is so pretty and lights up the garden.
In non-harvest news, the no-till no-dig plot extension experiment continues to astound me. For reference, here's the July 1st picture I showed a few posts ago.
Here's what it looked like on the 15th. It clearly loves growing in pure compost.
I swear the squash reaches out to grab my leg as I walk by.
So putting the sweet corn in the middle of the plot turns out to be another of my fabulous ideas. You can barely see it starting to peek over the squash, or some of it is anyway. But even if it reaches maturity, how in the world am I going to pick it? Sigh.
That's all for this week. Thanks for reading, and thanks as always to Dave at HappyAcres.blog for giving us this forum to show off our stuff.