Hello again from Eight Gate Farm! This entire week was hot and humid. Sunday was the hottest of all, but at least a breeze sprang up in the afternoon, which was welcome.

Reading the terrible heat wave reports from around the Northern Hemisphere, I can't really complain. All I can say is I've been sweating through three t-shirts a day, which is as unpleasant for you to visualize as it is for me to experience.

This week's post will run long, for which I apologize, but there was a lot to harvest and process.

Starting with the new harvests, I cut the first cauliflower. The Kitchen Goddess made a mash with it. It was cheesy and delicious, but maybe not the healthiest thing.

I picked the first pole beans. In the past I've only grown bush beans, but last year I really enjoyed the taste of this variety in the limited planting I did. So I planted only it this year.

The first "Beit Alpha" cucumbers ripened this week. This variety has an interesting history, having been developed on an Israeli kibbutz in the 1940s. I got the seeds as a sample, and the fruits are quite good.
Typically I wait to pick the sweet peppers until they have reached their full mature color. But I was not diligent about removing the first few flowers of some seedlings, and later it looked like the plants were concentrating their energy on the first fruits. So I cut them off. That's fine, as green peppers are good too.
Our raspberry canes are showing their summer flush. They really start going crazy in the fall. Here they are, along with a nice picking of blueberries, which are starting to come in strong.
Now for "continuing harvests." Here is Monday's picking of zucchini, cucumbers, and broccoli side-shoots.
Here is Wednesday's, with another cauliflower, green onions, shishito peppers, cucumbers, and zucchini.
Here's Friday's, featuring raspberries, blueberries, collards, fennel, beans, and zucchini.
And here's Sunday's, with cucumbers, salad greens, beans, and zucchini. While our climate may not typically allow homegrown salads and tomatoes, at least we get a brief period of salads and cucumbers!
The Kitchen Goddess shares a community garden plot with her mother. Here's a sample harvest from them. 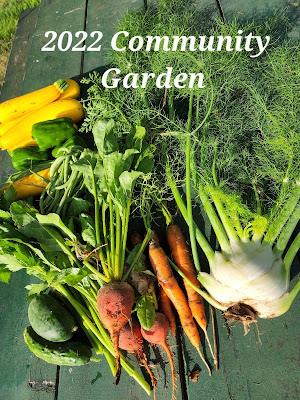 Understandably, the fridge was full to bursting with fresh produce. So we processed a lot for the freezer. From top left is cauliflower, yellow zucchini, green zucchini, and beans.
TKG took a large zucchini and made tortillas, if you can believe it! They are keto and gluten free, and will freeze well. They taste great, and would be wonderful with a fried egg on top I'm sure.
She got the recipe here: https://alexandracooks.com/2022/07/16/zucchini-tortillas-4-ingredients-gluten-free-baked/
Two weeks ago I harvested Sugar Rush Cream hot peppers, which TKG immediately started fermenting. The mash was ready this week. She pressed it through a sieve and yielded two bottles of hot sauce. The stuff that wouldn't go through the sieve was also kept for seasoning. The sauce has a very enjoyable floral flavor, and the heat gradually builds without overpowering. It's great!
Finally, in Wildlife Notes, I found this Grey Treefrog in the saucer of a pot of succulents on the table on the back patio. As you can see, this species as a chameleon-like ability to blend with its background.
Whew, that's it. Thanks for reading, and thanks as always to Dave at HappyAcres.blog for hosting Harvest Monday!