Welcome to another Harvest Monday. Thanks to Daphne's Dandelions for hosting for such a fun forum. 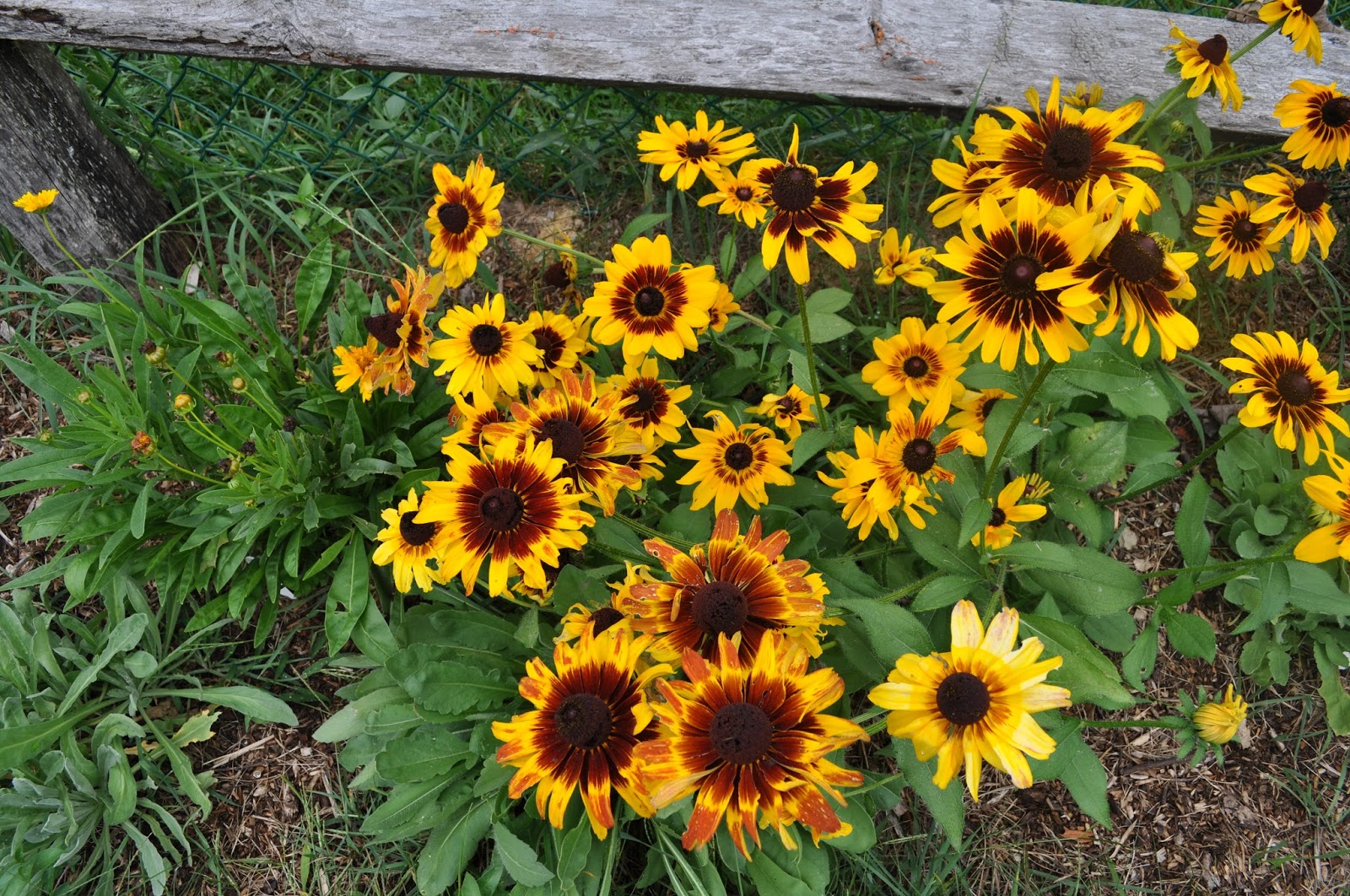 A Rudbeckia, var. "Denver Daisy," grown from seed in Spring, transplanted, and gracing the perennial garden all this summer. I sure hope it turns out to truly be a perennial as advertised.

Well, we've crossed into the "ber" months, and true Yankees know what that brings...brr and embers (in the wood stove). But not yet! 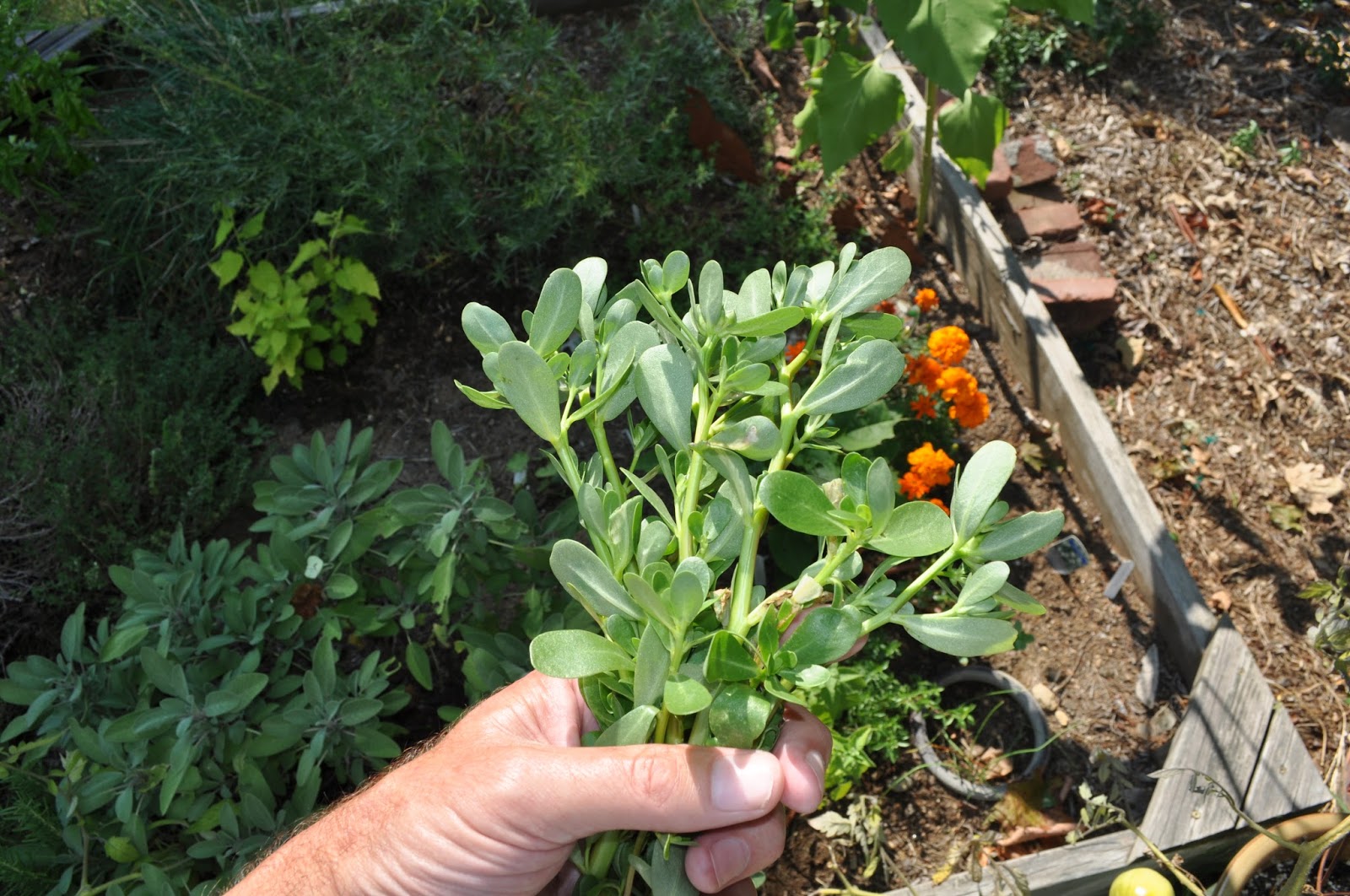 A small picking of Green Purslane to put in a salad, and to keep it from going to seed in the Kitchen Herb Garden. I used just the leaves and immature flower buds. I thought their tanginess would go well with Ranch Dressing, and it did. 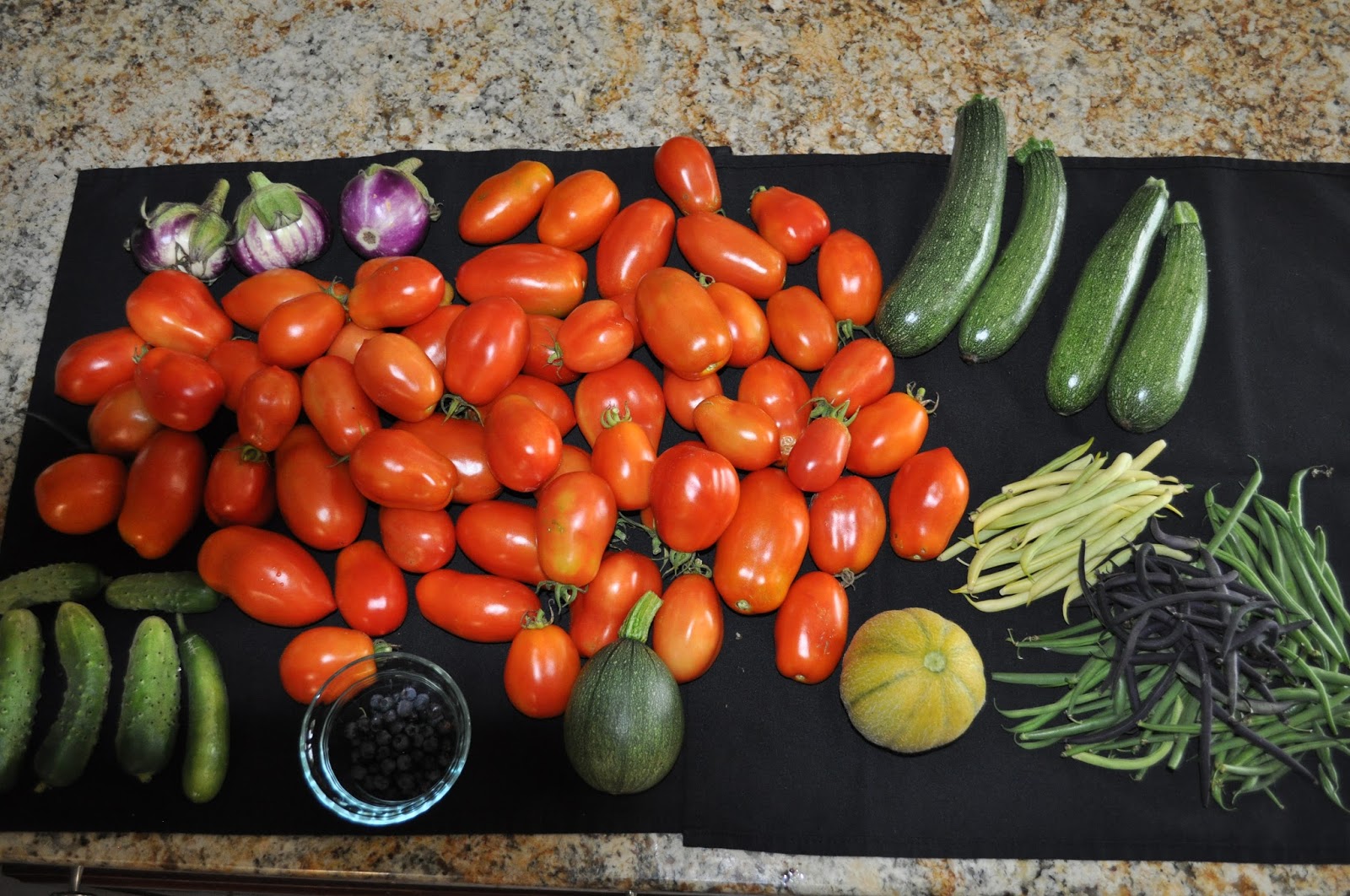 A mid-week harvest of 18 lbs. (8+ kg.)! So heavy I had to support the poor old basket from the bottom. And there weren't even any carrots or beets added to spike the weight. I was surprised to still find about 50 blueberries. I had thought that with the netting removed since last Sunday the birds would get them all. The Kitchen Goddess canned 8 pints (1.89 l.) of pasta sauce for our Winter enjoyment.

I'm trying 3 varieties of sauce tomatoes: Roma, Martino's Roma, and Incas Hybrid. The Incas produces a smaller amount of fruit but are noticeably larger in size, and the Roma (which most gardeners are familiar with) produces the most, basically of average size. I'm finding the Martino to be a much less vigorous plant and a slower and smaller producer. I don't think I'll grow it next year. 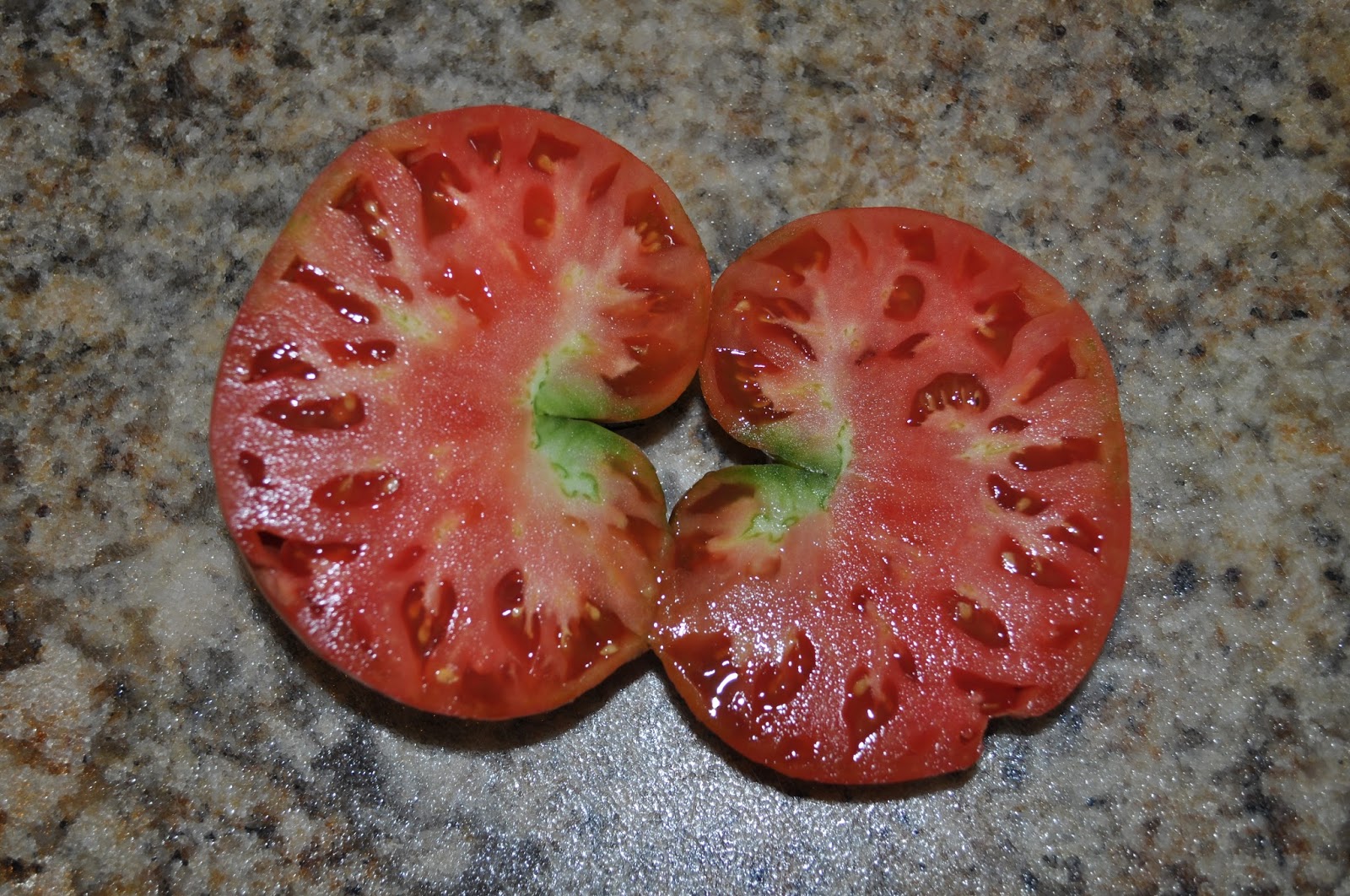 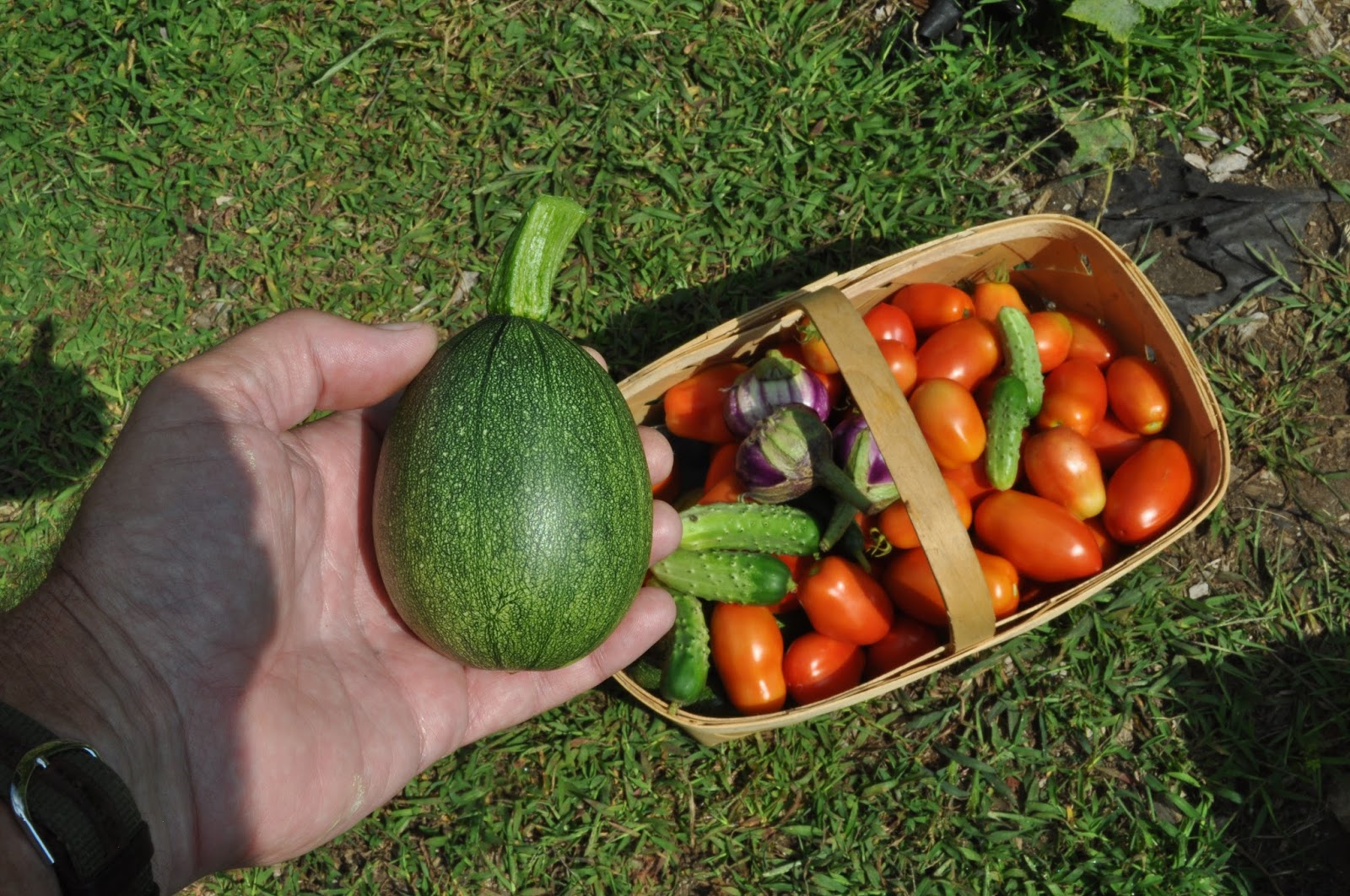 I took a young Tatume (aka Calabacita) to see what the summer phase of this summer/winter squash
is like. To me it tasted quite like zucchini, but with a slight tanginess, and surprisingly did not need to be peeled. But we have enough zucchini! It has been pitched as a "survival" food source, resistant to SVB and extremely prolific. I've found it to be neither. Maybe it is better suited to Texas or places like that. If we like the way it tastes as a winter squash I might give it a go next year; otherwise just chalk it up to experimentation.

Speaking of zucchini, all four plants are heavily infested with powdery mildew. They are still gamely sending out new leaves, which within a day or so immediately get infected. I would pull them out as they are so unsightly, but they are still producing. When I do pull them they will go on the burn pile, not into the compost. Hail The Great Cleansing Fire! 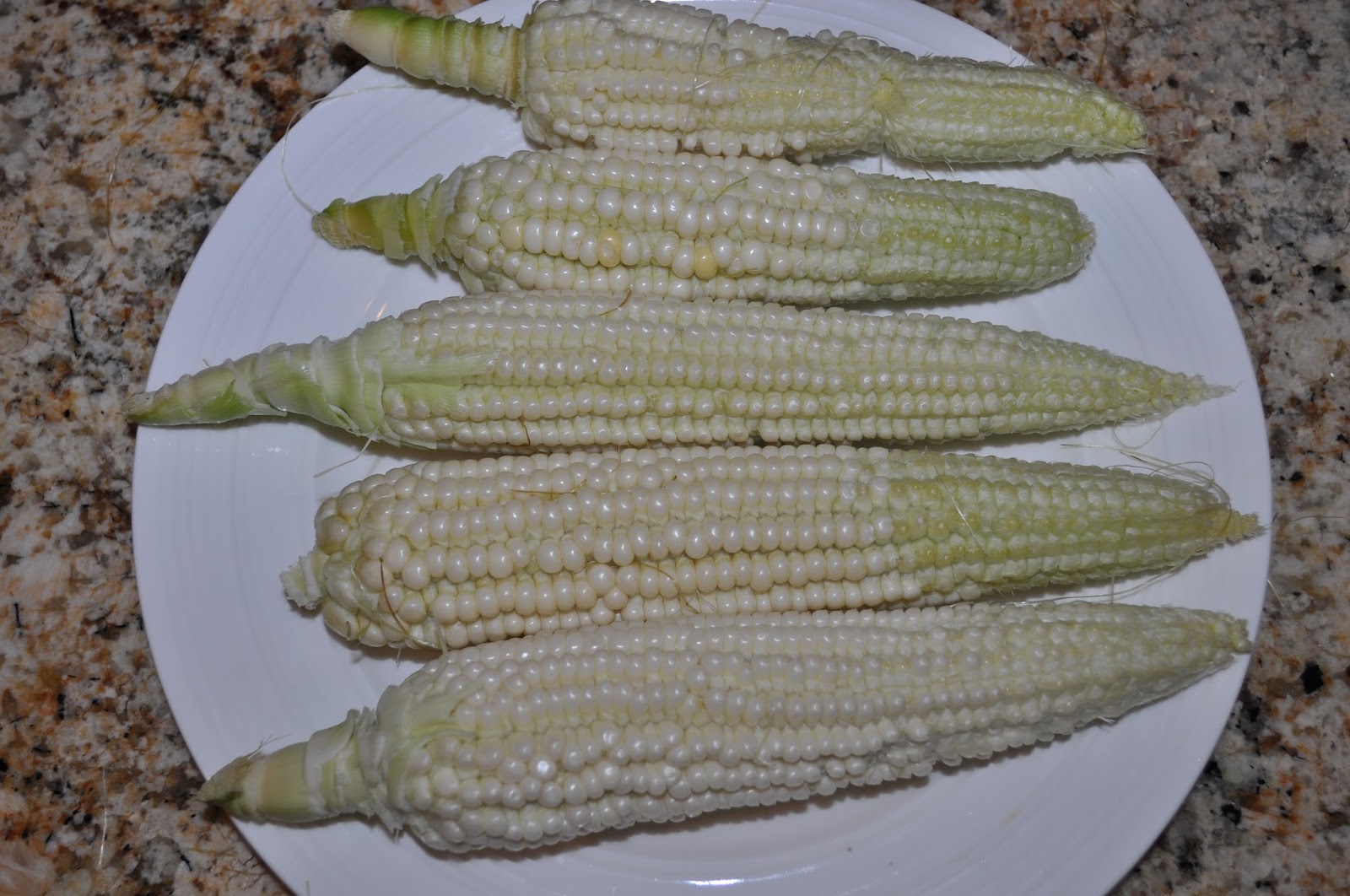 Another corn disappointment. The silks had withered (where they hadn't been chewed off entirely) so I don't think they would have filled out any more. This is an old variety "Stowell's Evergreen," which gets its name from being able to hold in the field for a long time. Maybe I'll just let the rest stay unpicked longer. 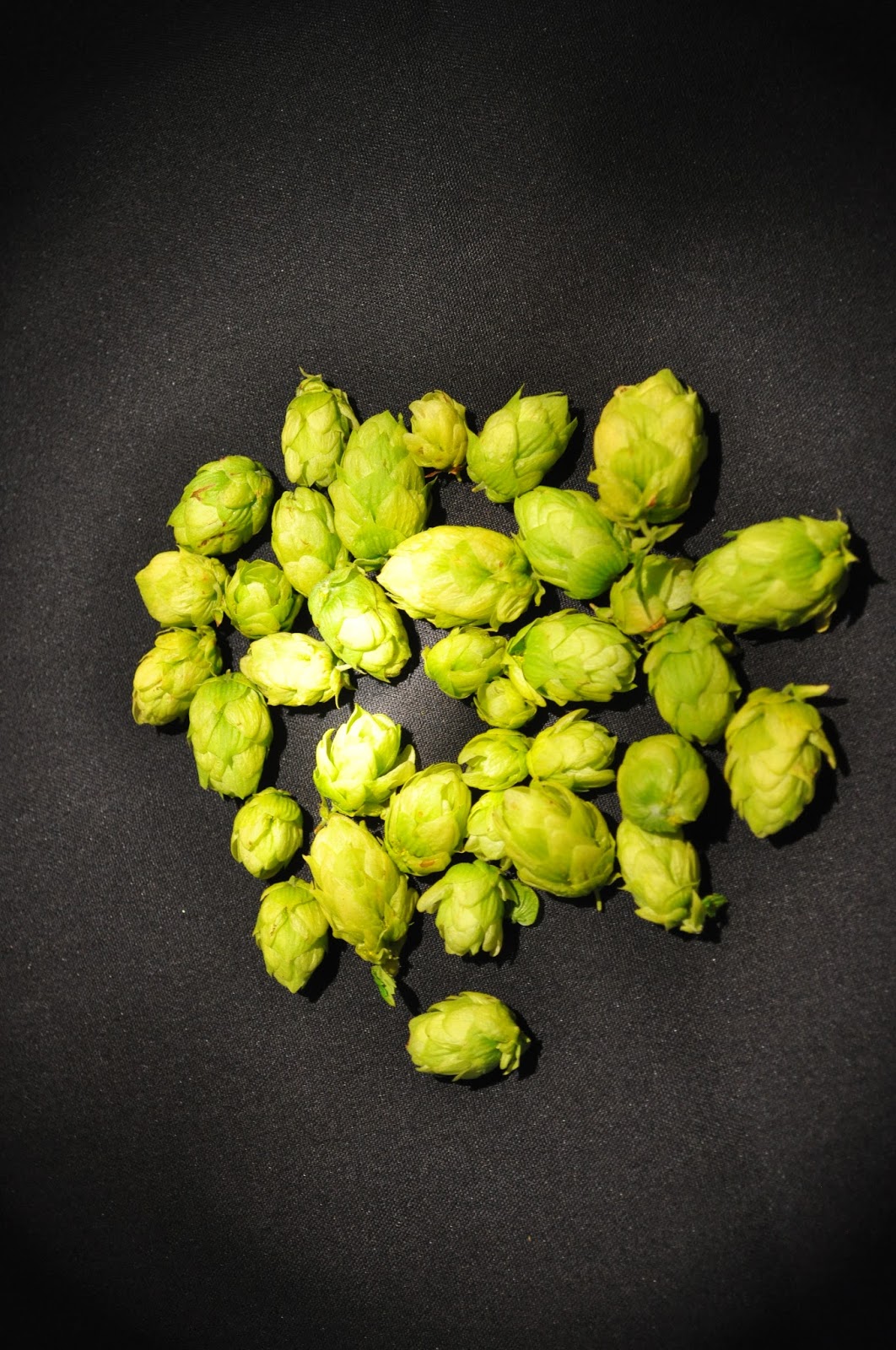 I picked all my hops, such as they are. I put in the tiny plant last year and it hardly grew. This year it sent out a few 4' climbers and flowered. It is "Mt. Hood" from Territorial. The plant was expensive, but it should last forever. At least I can say I have "my own hops" in my next batch of beer. 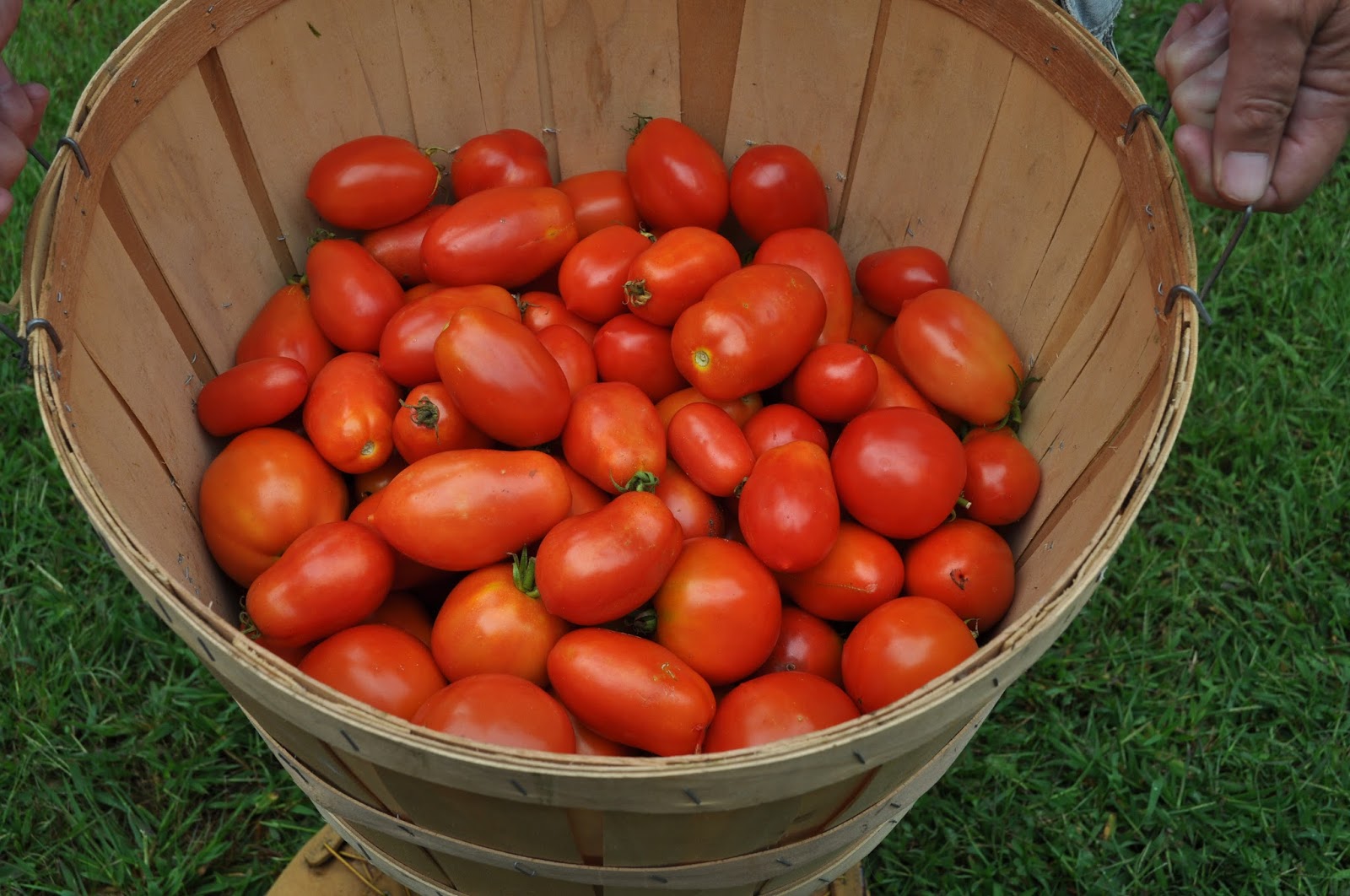 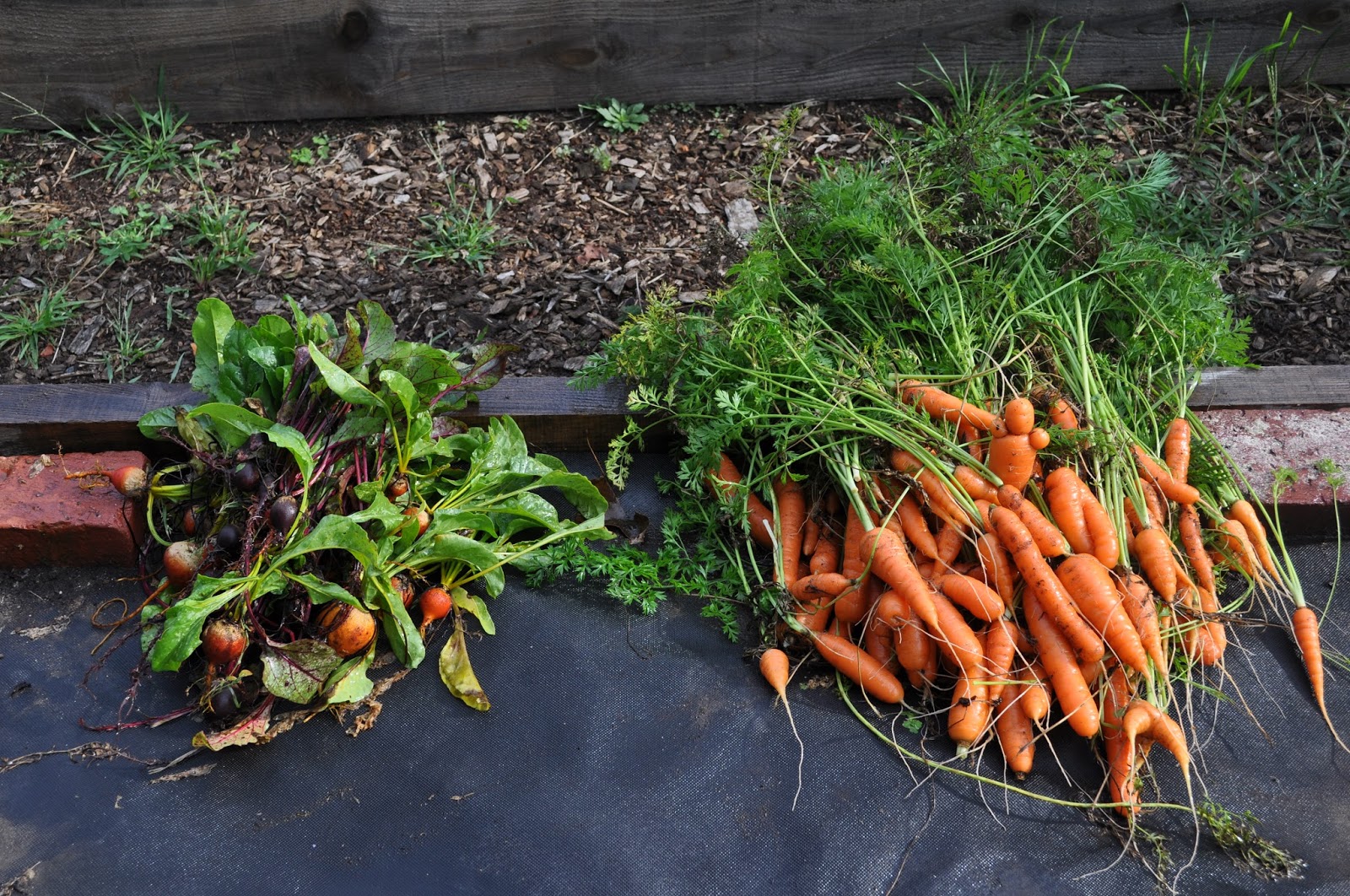 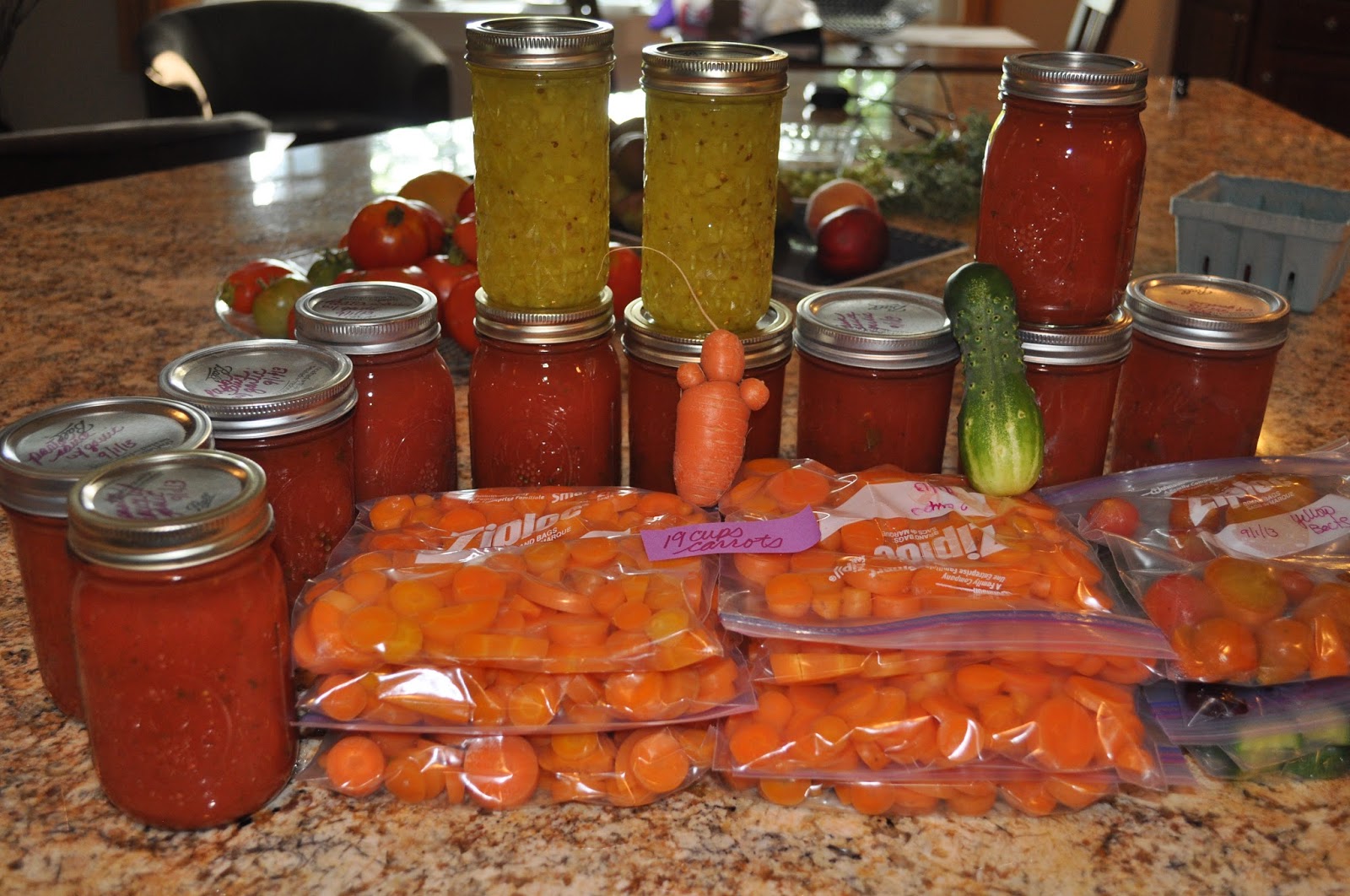 The hard-working Kitchen Goddess made 10 pints (2.37 l.) of tomato sauce out of this batch. More to come! Her goal (modest, I thought) was to have 20 pints to see us through the Winter. With this lot, we are at 24 pints (not including one jar which exploded in the water bath. Note to self: avoid Wal-Mart jars). Loving pasta, I am a happy man. Also note the 2 jars of pickle relish, and the 19 cups of carrots in bags bound for the freezer. And do you see the spooky Katchina Karrot? 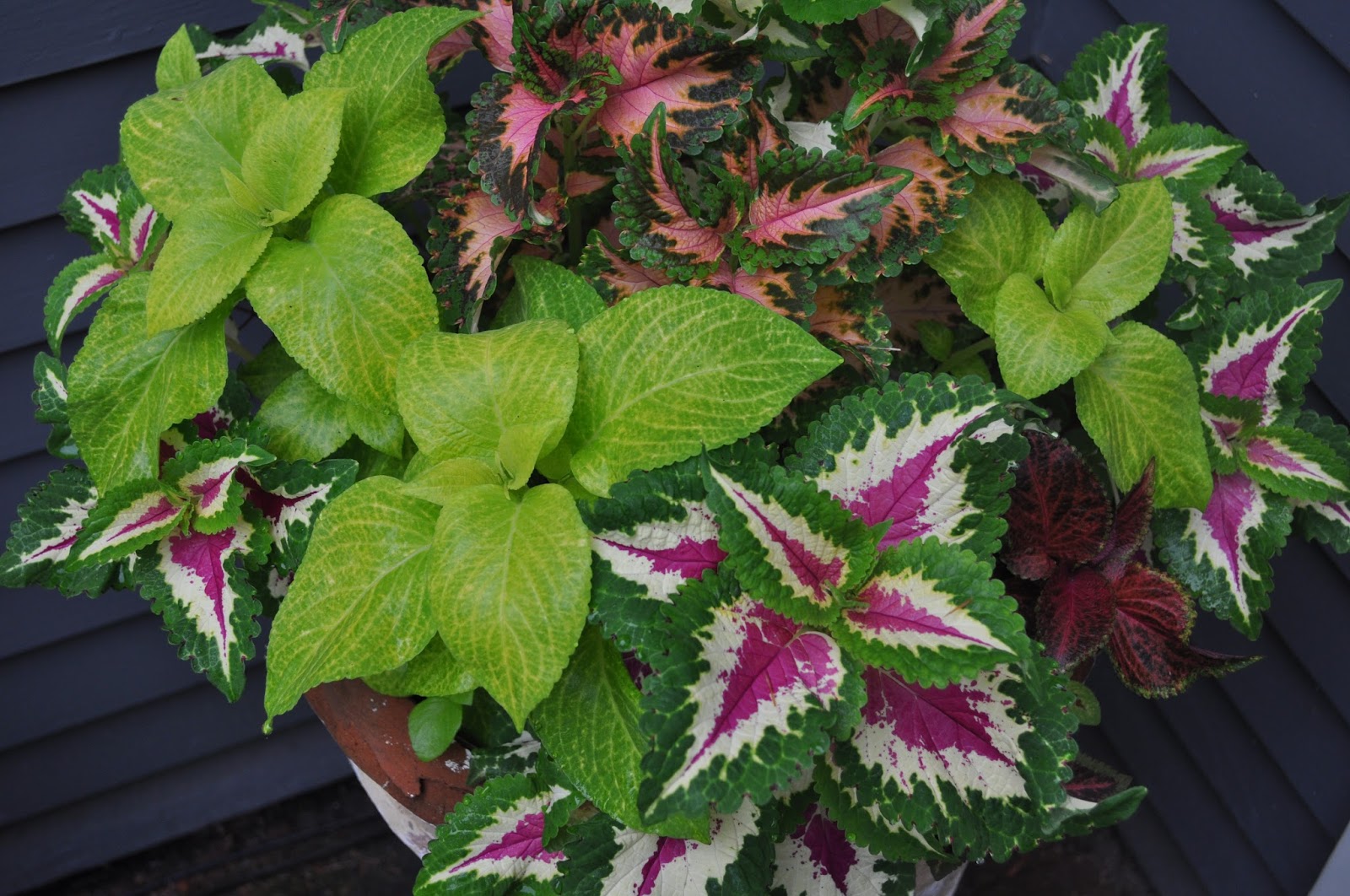 I close with a snap of a pot of Coleus (var. "Wizard Mix" from Fedco). The Kitchen Goddess, who was not impressed with this planting when it was struggling, is now a believer. Happy Labor/Labour Day to all gardeners, who know it is a "bonus" day to get back out there in the garden!
Posted by Eight Gate Farm NH