I was inspired by last week's Harvest Monday post by Dave, the wonderful host, in which he smoked peppers to make chile powder. Having an abundance of peppers, I decided to do it myself!

I picked all the remaining Maule's Red Hot cayennes (left, below), and Anaheim-type peppers. 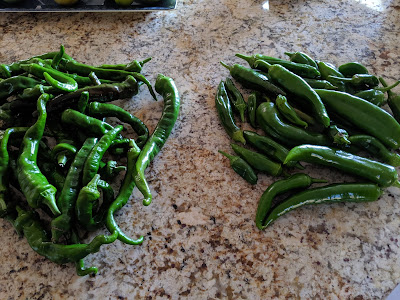 And I picked whatever yellow(ish) hot peppers I could find, and added them to what I had in the fridge. 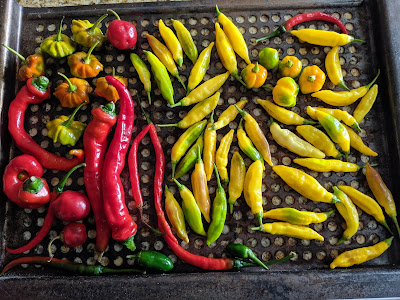 The yellowish ones are Brazilian Starfish, Hot Lemon, and Habaneros. They went into a separate batch. The red ones joined the cayennes in another batch, and the Anaheims made their own batch.

I fired up the smoker and did the three batches consecutively. The last batch was the Anaheims, which were joined by some thin pork chops. Boy did those taste great! Each batch took 1 1/2 to 2 hours. Some came out crisp, others were leathery.

The next day The Kitchen Goddess finished drying them in the oven. It made the kitchen smell like a campfire, but it was woodsy and pleasant!

Then, using a new dedicated spice mill, she ground up the separate batches to make the finished product, smoky hot chile powder. While she was at it, she ground up our dehydrated garlic (in the back below). 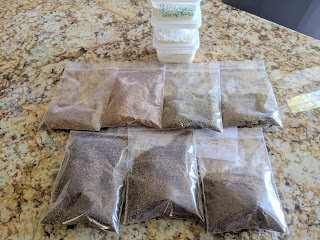 I'd say the results were a success! I had been thinking I grew way too many peppers this year, but with this and the hot sauces it seems like the right amount after all.

TKG got an enhancement to her hand-cranked "Wondermill Jr." grain mill. It's a socket that replaces the handle with the ability to use an electric drill. She was able to grind up some of our dried corn in a fraction of the time and with no stress on her shoulder. Here are different cornmeal grades running from coarse to very fine.

And there was enough to make me the dessert I was craving, Indian Pudding. Guess I was a good boy after all, or fooled her anyway.

This was the perfect accompaniment to another regional favorite we had: New England Boiled Dinner. Trust me, it tastes better than it sounds! It's basically corned beef and cabbage with added vegetables. She used carrots, onions, and potatoes. Nice to know that everything except the meat came from our garden.

That's really all to report this week. We still have not had a frost, but I'm starting to remove all the tomatoes, peppers, and eggplants anyway. Thanks for reading!

It was a pretty quiet week here in the gardens. Still no frost yet. I did manage a "first harvest" though. This is "Soloist' Chinese cabbage. I only planted a couple, and this was the only one worth harvesting. Slugs have a particular fondness for this vegetable.

I picked all the "Mad Hatter" peppers that were of decent size.

I picked the remaining eggplants, very small but still worth it.

And I picked a few of the spring-planted carrots.

The peppers, eggplants, and all but two of the carrots went home with The Kitchen Goddess's mom. I truly believe being able to share your harvests with appreciative family and friends is one of the greatest joys of gardening.

The "Painted Mountain" dry (flour) corn cobs had been drying for over a month. This week I shelled them and let them dry for a few more days. They yielded a lot more than I was expecting, almost 5 pounds.

This went into storage, ready for grinding any time we want. I have a hankering for an Olde New England favorite, Indian Pudding. For those unfamiliar, it's basically cornmeal mush sweetened with maple syrup. Maybe if I'm a good boy I'll get some soon.

That's all for this week. Thanks for reading! And thanks as always to Dave at HappyAcres.blog for hosting Harvest Monday.
Posted by Eight Gate Farm NH 1 comment: 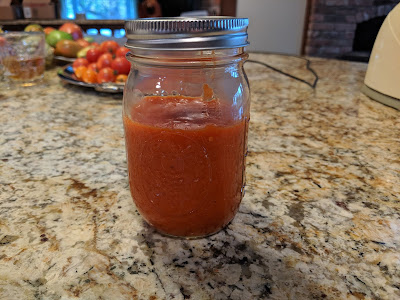 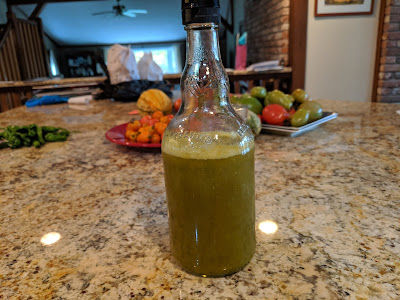 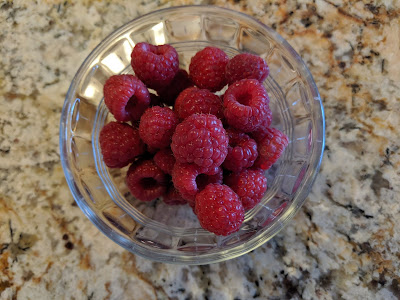 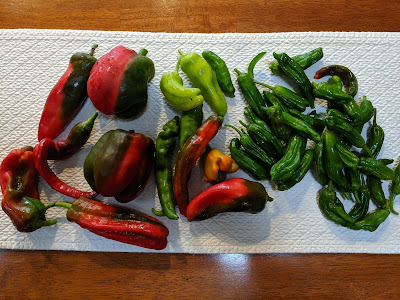 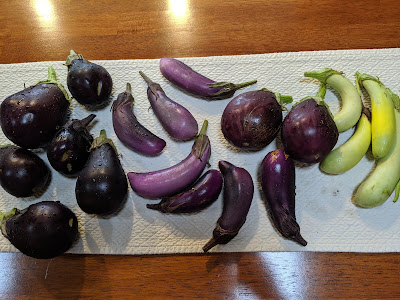 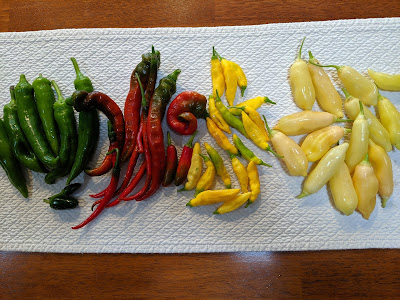 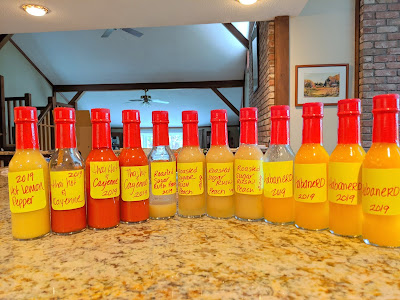 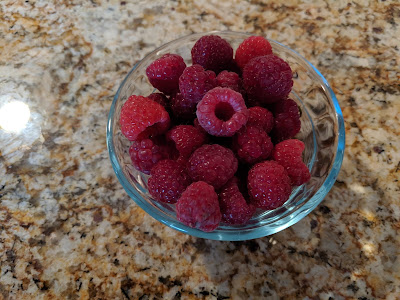 That's all for this week. Thanks for reading, and thanks to Dave at HappyAcres.blog for keeping the Harvest Monday tradition going.
Posted by Eight Gate Farm NH 5 comments: