As a sure sign of spring in these parts, we have concluded our 2016 maple syrup harvest. On February 15, at the start of a warming stretch, we set out our typical four taps, one each in the four big sugar maples by the barn. On Saturday the 27th we judged we had enough for our needs, and pulled the taps. For major producers, the season is actually just getting into high gear.

In that 12-day period there were two "runs" of sap. The first yielded about 10 gallons, which boiled down to roughly 1 1/2 quarts of Grade A Golden. Then we had a cold spell, which shuts down the flow. It resumed on the 23rd, This second run yielded another 10 gallons, which became roughly 1 1/4 quarts of Grade A Amber. Here you can see the results of the two runs, and the sharp difference in color. Naturally, the darker the syrup the more intense the flavor.


Here's a link to the new grading standards that most producing regions are now employing.

I've written about how we do this on a small scale here, here, and here.

The Kitchen Goddess did most of the work, of course, while I sat around in my bathrobe offering helpful criticisms. Naturally, I always thank the trees for their service:

So this was a good year. Not as good as last, when we got roughly 3 quarts in only 6 days of tapping. But we started a full month earlier this year, showing how quickly the warmer weather has arrived. 2014 was actually a bust, comparatively speaking, with only one quart produced. You never know.

The local high school has yet to set their taps in our "sugar bush" (quaint term for maple grove) down the hill, but they probably will start any day. Last year they gave us a quart in payment, which we have just now broken into, having used up our own production.

Needless to say, we love having our own syrup on pancakes and waffles made with our own cornmeal. Yes, there are some costs involved. Propane for the boiler cost $15 this year (the rest of the equipment we bought in past years). But it is so worth it. Driving around, I see more and more people clearly making their own on a small scale, which is heart-warming.

As I've said in the past, many people either prefer the "maple-flavored" corn syrup found in "Log Cabin" or "Aunt Jemima" brands, or have never tasted the pure stuff. But such heresy will get you ostracized here in New England.

That's it for now. Thanks for reading, and thanks to Dave at Our Happy Acres for hosting Harvest Monday.
Posted by Eight Gate Farm NH 14 comments:

Hello again from Eight Gate Farm! Us northern gardeners get itchy this time of year to see things growing, so anything in that endeavor is most welcome. In leafing through the Johnny's Selected Seeds catalog I came upon something I hadn't considered before--growing micro greens indoors. We have a lovely sunroom that gets quite warm and has lots of light. I use it to start seedlings, but not typically until much later in the year. Why not try something you can "harvest" in the dead of winter?

So I bought a packet of "Mild Micro Mix." It was kind of expensive (as are all Johnny's products in my opinion), $16.50 for four ounces. This mix is all brassicas. I filled a tray with 1.5 inches of potting soil, scattered the seeds heavily as recommended, covered with a thin layer of true vermiculite (not perlite, which to me is just tiny rocks), and misted several times a day. Before too long, there was green everywhere. What a pleasant sight! 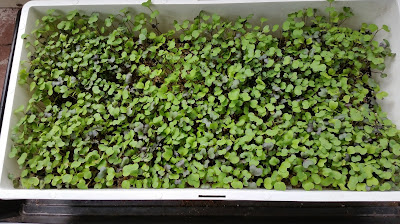 Johnny's says to harvest when the first set of true leaves develops. But mine just sort of sat there with its seed leaves for longer than I anticipated. Maybe I had sowed too heavily. I decided to harvest anyway. Harvesting is just giving it a haircut with a pair of shears.

The result was a nice package of mildly-spicy greens; just enough to serve as a salad for two couples. It was delicious with a little bit of light Caesar dressing. 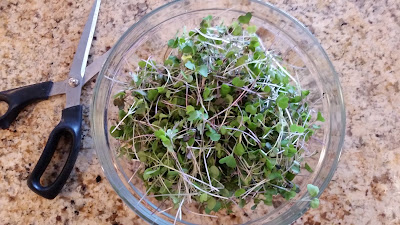 I will definitely grow at least one more crop of this before we get into the main seed starting time. It really was no work at all, fun, and great-tasting. Plus you feel like you are doing something!

On this same concept, I'm growing sprouts for sandwiches. I added alfalfa and Chinese Cabbage seeds for sprouting (i.e. not treated with anything) to my Pinetree Seeds order. If you have not done this before, all you need is a wide-mouth quart canning jar and a screen. Soak a tablespoon of seeds for 6 hours, drain, then rinse daily until ready. The alfalfa only takes about 5 days. I especially love them on a warm toasty onion bagel with sharp cheddar cheese. So healthy too! 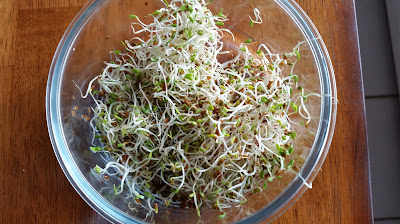 I've done several batches of alfalfa, but my first attempt sprouting the Chinese Cabbage failed--it got moldy and stank to high heaven. I'm trying another batch right now, with only a half-tablespoon. Maybe that was the problem. Or the seeds could be bad. Or this is not the way to do it.

I encourage you to try growing sprouts and micro greens if the "gardening" urge is just too much right now, or just for health and taste!

Next weekend I will start my artichoke, leek, and onion seeds. And weather permitting, we will begin to tap our maple trees. Spring is on the way!

Thanks to Dave at Our Happy Acres for hosting Harvest Monday.
Posted by Eight Gate Farm NH 5 comments: