Hello again from Eight Gate Farm. It's spring, or as we refer to it here in New Hampshire, "Mud Season." Our first harvest of the year is maple syrup!


We actually weren’t going to tap our sugar maple trees this year. We still have quite a few sealed jars from last year’s crop, and not only that, we expected the local high school to continue to tap 30+ of our trees and “pay” us with a quart at season’s end. Well, we were surprised to learn that this year the school was only going to tap the trees on their own campus. Something about a lack of suitable transportation for the students. That’s a shame, as we really enjoyed seeing the students hop around in our woods emptying buckets.

So, we tapped the four trees by the barn we reserve for ourselves. The taps went in on March 8, at the start of a warming trend, though there was still a lot of snow on the ground.
.
On March 20 we felt we had enough and pulled the taps. I estimate we got about 18 gallons of sap. The Kitchen Goddess boiled it down in two batches, a tedious job. For those interested, I've written about our small-scale process here and here.

This resulted in 3 pints of  Grade A very light amber. It is not strong-tasting, but it sure is sweet! 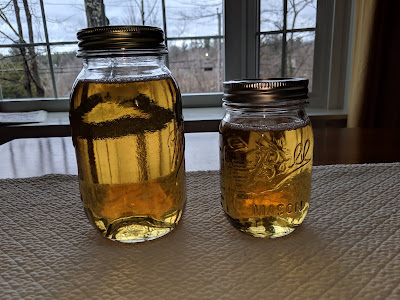 As I've said in the past, there are those who prefer the artificial stuff, but to most anyone in maple country that is heresy!

There won't be much else to post from a harvest perspective for quite awhile. Until then, thanks for reading, and thanks to Dave at happyacres.blog for Harvest Monday.