Here's another Harvest Monday update from Eight Gate Farm. The drought continues, forcing us to water a lot more than we'd like, but overall conditions are very favorable to good harvests.

Leading off with the "first harvests," I picked the first Sugar Rush Peach peppers. Compared to Sugar Rush Cream which I am also growing, Peach is larger and much, much hotter. Prettier too, I think, when they get their full peachy color, like this.

I'm growing two varieties for paprika; Alma Paprika and Hungarian Cheese, which is technically a stuffing pepper but its thick walls serve the paprika purpose.
I had a fun time pulling all the alliums. This variety is new to me, "Alisa Craig." It can make very big bulbs but does not store for long, so we'll use them first. It's called an "Exhibition" onion, and that's certainly what I hope to do for the Deerfield Fair at the end of September.

"Talon" is an onion I grew last year with good success, and this year is too. It stores for months.
"Red Marble" is a red cipollini onion that also stores very well. We still have a few from last year in good shape.
Compared to last year, the "Ambition" shallots are smaller but more numerous. This is another excellent keeper.
Yes, these photos of the onions crops look messy to me, too.
Rounding out the first harvests was the first picking of "Honey Select," a Triplesweet hybrid type. I will be feasting on this for the next week. It is crunchy and very sweet.
Moving on to the "general" harvests, here is Monday's tomato pickings.
And Monday's "everything else."
Wednesday was only tomatoes.
Friday had another heavy basket of tomatoes.
And hot peppers; Serrano, Sugar Rush Cream, and cayenne.
And finally Friday's "everything else" harvest.
The Kitchen Goddess braves thorns and bees to pick raspberries, which are starting to come into their big production period that will extend to hard frost.
In thinking about the Sugar Rush Cream peppers, I realize I've gotten over 5 pounds from the one plant I overwintered. We're starting to run out of ideas for them. On Saturday we started another fermentation batch with them (and the few Peach peppers). So we have a couple of weeks to decide. TKG made a Jamaican Jerk sauce with the last batch, and we had it slathered on chicken and grilled...very tasty! We also dried all the hot red peppers to make crushed pepper, something we use a lot of. Processing veg for the freezer freed up a lot of fridge space, but it will only fill up again shortly.
Lastly I show another great sample harvest from the community garden plot TKG shares with her mother.
Yet another busy week! Hope yours was great too. Thanks for reading, and thanks again to Dave at HappyAcres.blog for hosting Harvest Monday.

Hello again from Eight Gate Farm. We had the best harvest week of the year, and maybe one of the best in recent memory. I'll get right to it, starting with the "first harvests" of the season.

I picked the first artichoke, as always petite compared to supermarket size, but so much fresher!

Two "Halona" muskmelons/cantaloupes had slipped from their vines, indicating full ripeness, as if their fragrance wasn't enough of a tell.

We ate the larger one, and I gave the other to my MIL. Why would I do such a foolish thing? Because I knew an even larger one was getting ready!

Words cannot describe how good it tasted, both standalone and with a little prosciutto.

I picked the first ripe Serrano pepper, shaped like a jalapeno but hotter.
The first Brandy Boy indeterminate tomato was ready, a respectable one pound ten ounces.
We've found in the past that Brandy Boy is almost as good as Brandywine. We seem to be adopting the "BLT" method of taste-testing, and BB did very well, maybe a little sweeter than Brandywine if that's how you like it.
Next up is "Horizon," an indeterminate. This was from a free trial packet. It makes shapely 8 ounce slicers. It is said to be very sweet. I had one for lunch (not a BLT, just a pinch of salt) and was surprised to find it very acidic at first, not a bad thing for my tastes. More bites found it to balance out, but still on the acidic side. I liked it.
I've mentioned that I'm experimenting with several hybrid replacements for the San Marzano paste tomato, which I like a lot but has no disease resistance. One of them is "Andiamo," which was supposed to be earlier than San Marzano. I picked two this week, along with two San Marzanos, so the earliness was not so. I accidentally mixed them up bringing them in, and they are so similar I don't know which is which!
The other San Marzano replacement is "Granadero." I tried it last year and the plant did not do well, but this year looks great. The fruits are solid and heavy, and look more like Roma.
Speaking of Roma, it too started coming in this week. It's another of our canning workhorses.
I had planted a short row of Red Norland potatoes, and dug them this week. I was very pleased with the results.
For continuing harvests, The Kitchen Goddess picked some of the last blueberries.
Here are Monday's general harvests (i.e. crops I have already featured separately).

I picked tomatoes again on Tuesday ahead of a threatened storm, which actually never really materialized for us.
Friday's harvest was so big I need four pictures to show it. First is cucumbers, shishito peppers, broccoli shoots, and pole beans. You know how many people "zucchini bomb" friends, relatives, and people they don't know? We do that, but we also shishito bomb.
Next is courgettes et aubergines.
Next is the hot pepper harvest of Anaheims, Poblanos, Jalapenos, and fiery red Cayennes.
Last is the tomato harvest.
TKG and her mom got several great harvests like this from their community garden plot. Mom was thrilled. 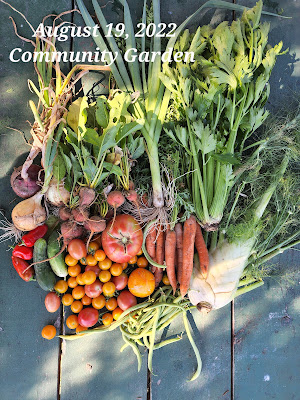 Saturday was very hot, so why not make the kitchen even warmer by canning? But we had to reduce the glut. TKG, with my feeble help, canned six quarts of chopped tomatoes, 6 pints of chunky mustard cucumbers, and seven jelly jars of sliced jalapenos.
If you made it this far, thanks for sticking with it. I hope you had great success this week too. Please join me in thanking our talented Harvest Monday host, Dave, at HappyAcres.blog.
Posted by Eight Gate Farm NH 1 comment:

Welcome to another Harvest Monday update from Eight Gate Farm. We had welcome relief from the heat and humidity this week, and some spotty rain, but not enough. We did have happy harvests though.

"Midnight Queen" is another hybrid Italian-style eggplant, that is supposed to be earlier than Nadia. In my case, it was later by a few days. There's nothing wrong with it, but I think I'll just grow Nadia in the future.

I picked the first Brandywine Pink heirloom tomato, weighing over a pound and a half. It's our favorite variety. It's not much to look at on the outside.

But on the inside, pure bliss!

In fact, I was so excited to make a BLT with it that I forgot the L.

I picked the first Pink Berkeley Tie-Die, which is another super-flavorful selection.

And the first Burpee's Early Pick, a hybrid indeterminate that is supposed to be what its name implies, but it was no earlier this year than a lot of the big slicers.
For a smaller indeterminate tomato with great flavor, we like Gardener's Delight. They're about golf ball size, or a "two-biter" as I like to call them.
Dark Star is an interesting tomato I'm growing for the first time. It has late blight resistance, and is described as having a smoky taste like Cherokee Purple or Carbon. Well, I tried it, and while it is very good, I didn't get the smokiness. It looks very productive, so maybe others will.
Another first-timer is Marzito, a hybrid San Marzano type for saucemaking. I was attracted to it because while much smaller than true San Marzanos, it was supposed to mature in 50 - 55 days. Not for me. More like 75 days. Unless it redeems itself by being super-productive I don't see the need to grow it again.
Turning to determinates, I picked the first Rutgers. This is another of our canning workhorses.
And a first-time-growing paste variety called "Bellatrix." It too is supposed to have strong resistance to late blight. I'm trialing it as a replacement for Roma, which is another workhorse, but has no disease resistance. Bellatrix has nicely-shaped 4 oz. fruits.
Another first harvest (and first time growing) is the dry bean called Calypso or Yin-yang. This was the entire crop, pretty good since only about half of the seeds I planted made it. Bean seedlings are very attractive to chipmunks and squirrels.
If I had named this bean, I would have called it "Orca."
For general harvests, by which I mean crops that have already been featured by themselves in this or other posts, Tuesday's required two baskets to bring in.
That's the last yellow zucchini. Vine borers finally killed all four plants. Also the last of this planting of sweet corn. Thankfully another is on its way.
Friday's harvest also required two baskets, one for tomatoes.
And another for everything else.
The Kitchen Goddess continues to pick blueberries.
Underneath all the new vegetables in the fridge were three kohlrabi we'd forgotten about. Even though they were picked in early July, they were still as fresh as can be. TKG tried her hand at making a spicy kimchi with them, now fermenting.
And to reduce the glut of cucumbers, TKG canned six pints of dill pickles.
All in all a busy week! But it's that time of year. I hope your harvests were good too, and I look forward to reading about them on Harvest Monday, kindly hosted by Dave at HappyAcres.blog.