Hello again from Eight Gate Farm. We had another week of hot and humid weather, making all tasks even more difficult, but the harvests kept coming!

I took the first slicing tomatoes this week. This is a variety I was curious to try. It's from the "Heirloom Marriage" series, and is a cross between Brandywine and Costoluto Genovese. It's called "Genuwine"...get it? It's supposed to be much earlier and more productive than its parents, while maintaining all the taste. That's a lot to live up to! They certainly nailed the earliness, as my first Brandywine is only just starting to blush.

We cut two thick slices and had them on BLTs. Their big bold taste really came through, and I can't wait to have another. We'll do a real comparison when the Brandywine ripens, but for now, I am very pleased with this tomato.

I also got the first "saladette" Juliet tomatoes. I've described them as one of our workhorses, and our Harvest Monday host Dave is smitten with them too.

The first cayenne peppers ripened.
As did the first Ping Tung Long eggplants.
"Bride" is a very beautiful hybrid eggplant. I've often wanted to enter it in the competition at the Deerfield Fair, but it tends to have small rusty blemishes which might disqualify it. This one, though, was perfect.
And I dug the first row of potatoes. These are Yukon Gold, and while it was not super-productive (some varmint dug up a lot of the tubers when first planted), most of them are of good usable size
Now on to general harvests. Here was Monday's, with zucchini, cucumbers, broccoli sideshoots, shishito peppers, and the last Romanesco.
Here was Wednesday's, with green and yellow zucchini, cucumbers, broccoli, jalapenos, shishitos, pole beans, sweet corn, another Ping Tung eggplant, and in the middle the "Valentine" tomatoes.
The sweet corn was perfect in every way.
The fridge was full again, so I cut up and blanched a lot for the freezer.
Here was Friday's harvest, with sweet corn, zucchini, cucumbers, eggplant, and Valentine tomatoes
I'm still trying to form an opinion on the Valentine tomatoes. They taste pretty good, and are meaty with thick skins. They are maybe half the size of the Juliets. The Kitchen Goddess made me a sort of "skillet moussaka" with ground beef, eggplants, potatoes, and the Valentines. It was really good, but she had to pick out the shed skins of the tomatoes.
Sunday's harvest had sweet corn (first planting winding down), cucumbers, tomatoes, broccoli, pole beans, and zucchini. You can see the size difference between Juliet (larger) and Valentine.
It's funny how cucumbers can go from "almost ready!" to "whoops!" overnight.
TKG picked at least a quart of blueberries on a hot Sunday morning. 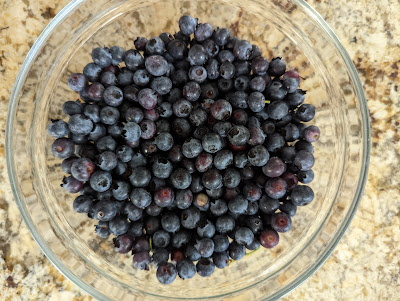 Of course I have to feature one of the bountiful harvests from TKG's community garden plot.
So Thursday was the hottest of all, touching 100 F. inland. But I was offshore for the day! Since it has nothing to do with harvesting, I did a separate post on what I did, which was really exciting and unusual. Please check it out and tell me what you think:
https://eightgatefarmnh.blogspot.com/2022/08/a-visit-to-celia-thaxters-garden.html

That's all for this week. Thanks for reading, and my continual thanks to Dave at HappyAcres.blog for hosting Harvest Monday.