Hello again from Eight Gate Farm. We've had a week of pleasant weather. One day it got to 85 degrees F (~29 C), but nights have dropped as low as 42 (5.5 C). Of course, it's the lows that we gardeners most closely watch. 42 is too cool for the solanacea to be happy. But it looks like the 40s are behind us, so I'll be transplanting tomatoes later today. I'll wait for the peppers and eggplants until later in the week. It will be a relief to cease moving all the trays in and out to harden off the plants.

We love Asian greens here, and use them extensively in soups and stir-fries. I'm trying three new varieties this year, and the first pickings were done this week.

This is "Pechay" from Burpee Seeds:

This is "White Stem" from Botanical Interests:


And this is "Asian Delight" from Johnny's Selected Seeds:

You will of course notice the flea beetle damage on all of them. This makes them totally unmarketable, but doesn't really bother us.

The Kitchen Goddess took some of each and made a delicious egg drop soup. It was a perfect light evening meal on the screened porch, paired with a nice chardonnay. Do you see our new tabletop gas fireplace? It adds cheer to an already cheerful space. 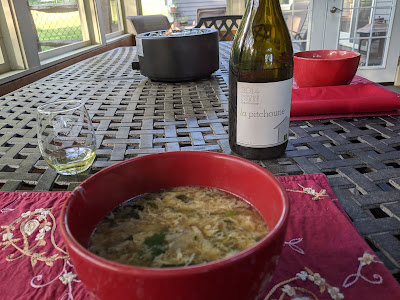 The asparagus is continuing to produce a few spears at a time. There is nothing like fresh asparagus. 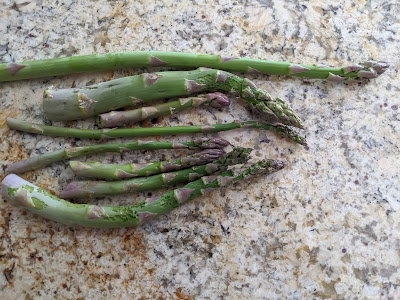 In wildlife notes, TKG spotted this Gray Treefrog. This guardian of the garden really needs to work on its hiding skills! Against tree bark it is almost invisible, but in a flower pot? I'm looking forward to its trilling calls on sultry summer afternoons.

That's all for this week. Thank you for reading and commenting. Please join me in reading all the Harvest Monday posts, hosted by Dave at HappyAcres.blog.
Posted by Eight Gate Farm NH 6 comments:

Hello for the first time this season! Like so many, we've had a cool spring so far, and for us it seems to be the new normal. Lately the days have been pleasant, but the nights cool down considerably. Anything I've sown or transplanted is growing very slowly, and they are all "cool-season" crops, but I guess they still need warmth to really take off.

Even the asparagus is poky. But last there was something to harvest and share at Harvest Monday. 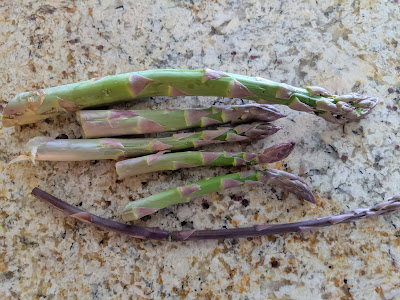 I could have waited to cut the smaller ones, but I didn't want the bigger one to get woody.

A day later I discovered this overachiever: 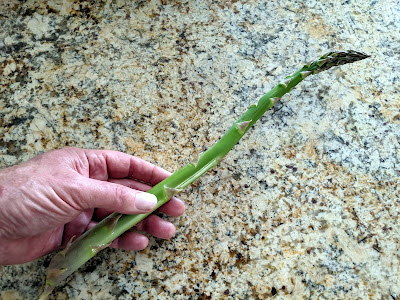 How did I miss it? It was growing amid some raspberry vines that had spread to the asparagus.

Anyway, good to savor something from the garden.

I've been using the cool weather to really get going on some tasks that will make the late-May planting rush easier. The biggest project was to build five new 3x10 raised beds. This time I used real cedar, which is super-expensive, but hopefully will last for years. We got five cubic yards of loam/compost delivered and filled the beds. Already I've planted artichokes in two of them. 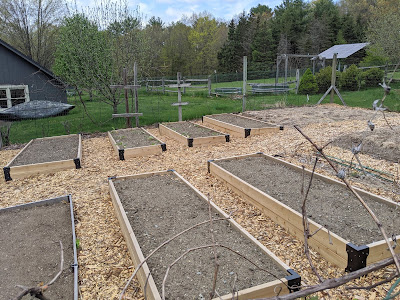 I also used cedar to replace a 4x12 bed,, which is to the left in the back row. We had a tree service do some work here repairing storm damage (broken pine nearly hit the house in an ice storm). We used the results from their woodchipper to refresh the paths in the fenced garden. Looks nice.

Out in the field garden I've got things in the ground, and am all set for planting dry beans when it finally warms up sufficiently. In the background is a row of garlic, doing well, then two rows of sunflowers (planted), then three rows of beans, then two rows of potatoes (planted). Then I don't know what yet, maybe some pole beans on tipis? 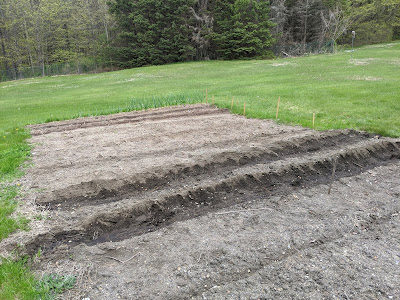 And I also rebuilt the bed that houses the kitchen herb garden. I used pressure-treated lumber for this. 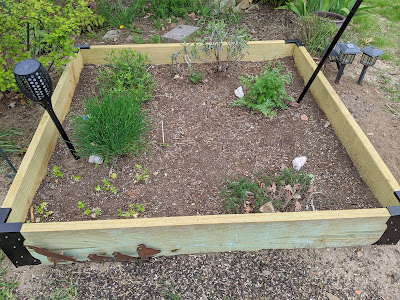 I've mentioned before that we have two struggling pear trees, that were planted in the wrong location and get heavy shade from the spruces next to them. I was happy to see they have more flowers than I can remember.

So, lots going on, and lots of work to do in the next few weeks. Thank you for reading, and thanks to Dave at happyacres.blog for hosting Harvest Monday.
Posted by Eight Gate Farm NH 6 comments: