The weather moderated this past week, with no new frosts. That will all change this coming week. Several overnight frosts are predicted.

I took another large cutting from the spinach. I’m not sure if I’ll get another one before the frosts. In any event, my plan is to heavily mulch the plants with straw and see if they will overwinter and regrow in the early spring. 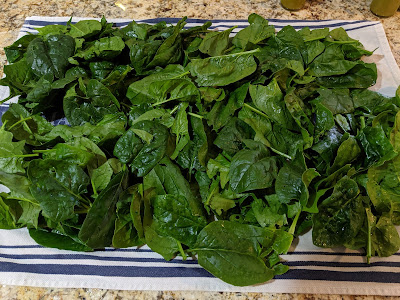 After the broccoli stopped producing sideshoots in mid-summer, I cut the plants down to the ground but was too lazy to pull them completely out. To my surprise, they regrew and two of them gave us some nice-sized heads. I may try that again next year.

Raspberries are continuing to provide us well. 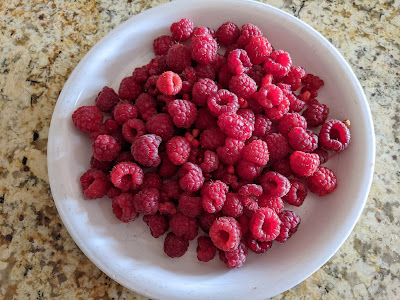 I picked all the late-maturing green apples. This filled two bushel baskets. I’ve gotten a lot more in the past, but I’ve been severely pruning the tree to get it back down to manageable size.

The apples themselves are spotty and lumpy, not really good for anything besides processing. We decided to make another batch of sparkling hard cider. So on Saturday we pressed the two bushels. This netted two gallons.

Since we wanted to fill a standard 5 gallon fermentation pail, we bought three additional gallons from a nearby cider mill that does not pasteurize their cider. We are using champagne yeast to get the process going.

Last fall I planted 25 saffron crocus corms. They immediately started growing and stayed emerged all through the winter. In summer they died back, which is their expected behavior. This fall only a few re-emerged, whether it was due to the drought or voles I cannot say. But some started to flower this week! The part you get saffron from are the red thread-like stigma. While we won’t set any records with this “harvest,” it’s still fun to know we got some.

I made some simple un-fermented pepper sauces. Here are 1+ bottles of Roasted Sugar Rush Peach, and 2+ bottles of something I’m calling “Mean Green Sauce,” made with green Habanero and Suriname peppers. Both have really good flavor besides the “kick.” 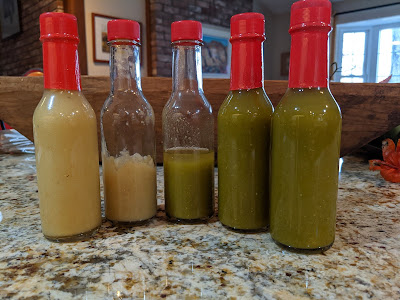 The sugar and red maples get most of the attention in the New England autumn foliage display, but I think the hickory tree at the top of our field deserves recognition too.

That's all for this week. Winding down! Thanks for reading, and thanks again to Dave at HappyAcres.blog for hosting Harvest Monday. 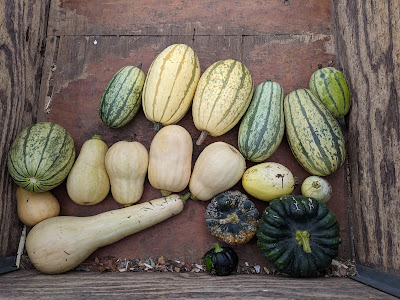 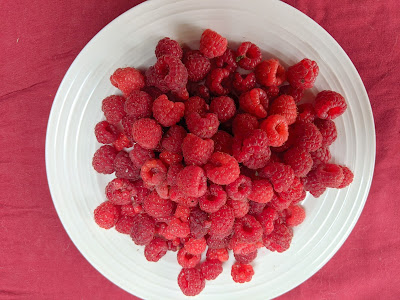 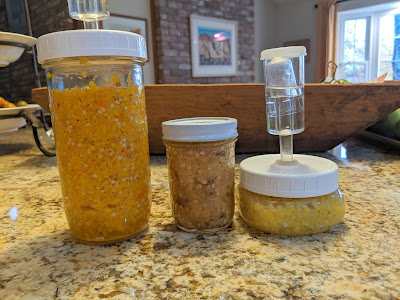 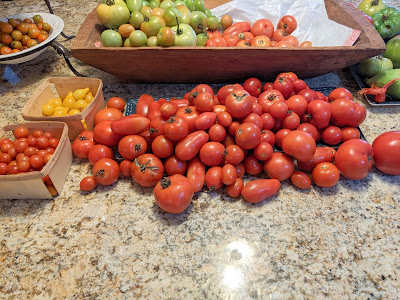 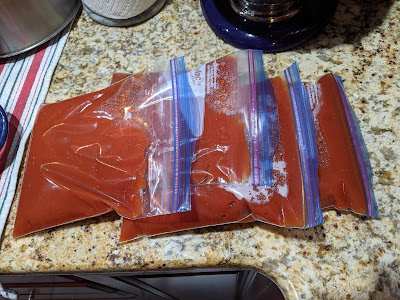 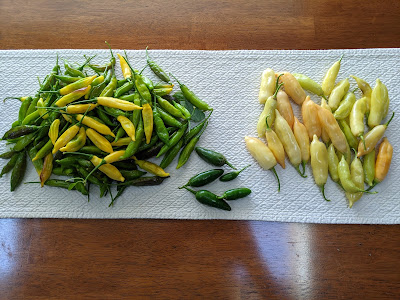 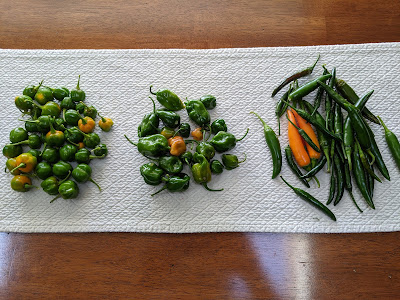 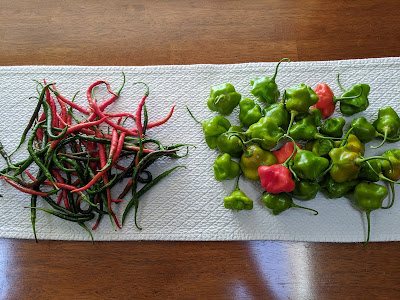 Hello again from Eight Gate Farm. While technically we did not get a frost last week, it got awfully close. Some of the more tender plants looked frost-nipped. Prior to that, I picked all the ripe hot peppers.

Same with the sweet ones.

We also made a generous cutting of spinach, which filled two bags.
Later, after the cold spell, I took nearly all the rest of the hot peppers from the plants that looked damaged.
That should be enough to finally start the hot sauce process!
Having learned they were getting damaged by voles, I picked all the carrots. The vole-damaged ones on the left far outnumbered the others. But I'll let you in on a little secret. Trimming away the damaged ends and peeling them, we use them anyway.
I also picked all the remaining turnips. Some had grown quite large. This gave us useful greens as well.
Here's what we had for the freezer from all that. In these uncertain times, it's comforting to know we have quality food put by. 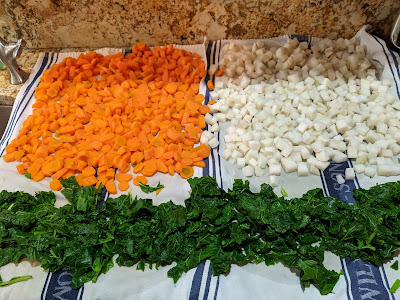 Fall raspberries are giving us pleasure, with daily pickings like this or more. 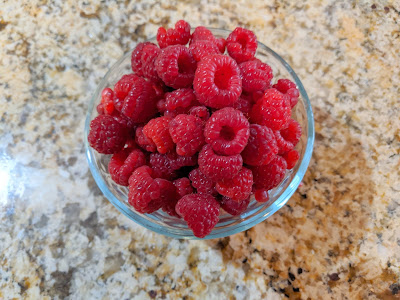 As for tomatoes, I'm continuing to pick any that show some color and adding them to the pile on the kitchen island. One day last week I sorted though what we had to see what could be immediately used. 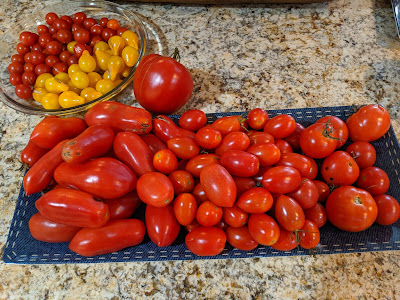 We processed those into 3 pints of thick sauce. Not enough to efficiently can, but great for ready use as needed. 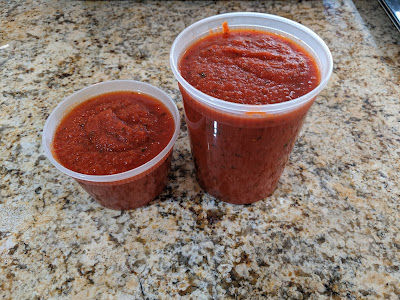 The Kitchen Goddess and her mother closed down their plot at the community garden. As usual the "MIL" went home with a bounty. But they are sad it's over for the season. 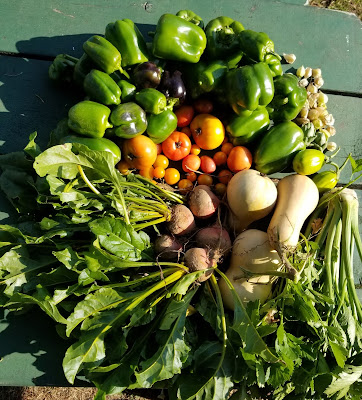 That's a wrap for another week. Thank you for reading, and thanks again to Dave at HappyAcres.blog for hosting Harvest Monday.

Autumn greetings from Eight Gate Farm! The week started off surprisingly warm, even humid. On Tuesday we took a day off from garden chores and drove two hours up to The North Country. We went through Franconia Notch and stopped where the famous New Hampshire icon “The Old Man of the Mountains” once could be viewed. The mist made it look gloomy. 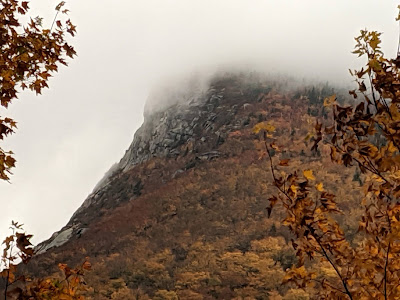 The rocks making up the stone face fell in 2003. A helpful sign showed how it suddenly happened on that fateful night. 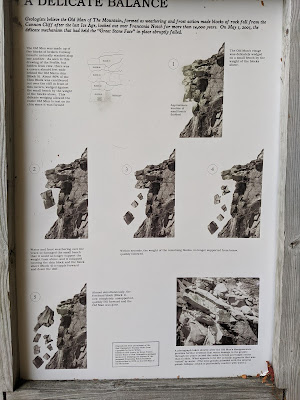 Continuing on, we took a pleasant hike to Cherry Pond in the Conte National Wildlife Refuge. The water was low because of the drought, but still made a pretty picture, with Mount Starr King in the background. 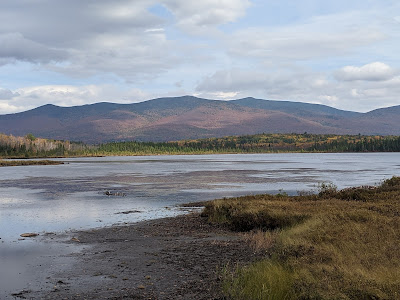 There were only two new harvests this week. These are hybrid Thai hot peppers called “Full Moon” and “Vesuvius.” Again, these plants came from my gardener friend who loves growing unusual peppers as much as I do.

In non-new harvests, I picked all the Poblano peppers. These were stuffed with meat loaf (!), wrapped with bacon, and smoked. We ate what we could, and the rest went into the freezer.

I picked a bunch more ripe hot peppers. In the top row are Anaheims, then cayenne and Sugar Rush Peach, then Habaneros and Hot Lemons.

I also picked a few seasoning peppers. Here’s an Alma Paprika, and some Arroz con Pollo. 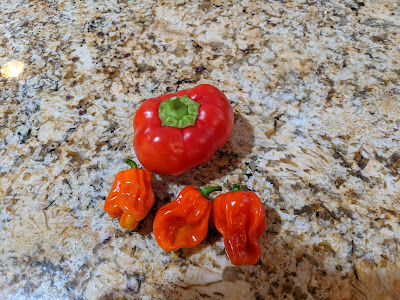 We decided it was time to replenish the spice drawer. I picked all the remaining Anaheims, smoked them, and we finished drying them in the oven.

The Kitchen Goddess then ground them in her dedicated spice mill.

All the Alma Paprika peppers were dried and ground.

And all the hot red chiles had the same treatment. This produced chile powder and some flakes. 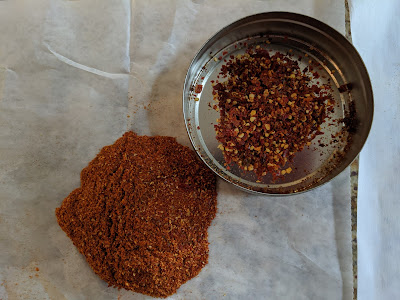 I’m sure glad did that late-summer planting of spinach. Another thinning produced a good quantity of fresh greens for us. When I was a boy, spinach was my favorite vegetable; in fact, maybe the only one I ate (probably Popeye propaganda). Now it mainly goes into our morning smoothies; a thing unknown back then.

It’s nice to still have flowers to cut and brighten the home. 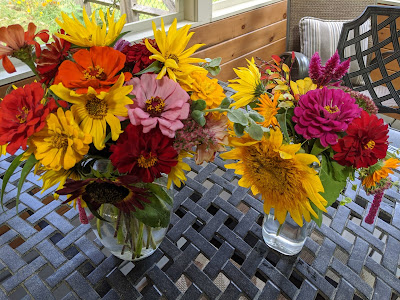 That’s all for this week. Thank you for reading. It looks like we may get a frost overnight on Thursday. If so, that day should be busy! If we make it through that, it warms back up again for the rest of the forecast. Thanks as always to Dave at HappyAcres.blog for hosting Harvest Monday!