It's been a couple of years since we tapped our sugar maple trees and made our own syrup. We had a good year back then, and we still have a few sealed jars which are holding up well. But we missed the process, so we vowed to do it again this year. We were pleased with the results; nearly two quarts of Grade A Light Amber. We've already started gifting some of the jars to grateful recipients. 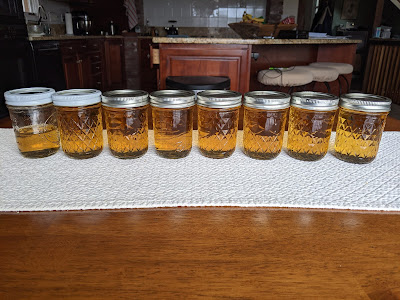 The ideal situation for a good sap run is a stretch of warm days (over 40 degrees F.) and below freezing nights in late winter. This presented itself on February 22. The Kitchen Goddess invited a friend from the garden club, who is a recent transplant to The Frozen North from Florida, to witness the process. She was quite puzzled by it! Here is TKG on the right, supervising the friend set a tap and bucket. 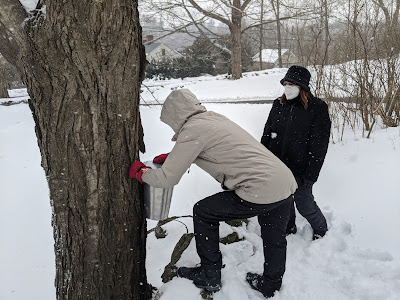 As you can see, it was a cold and snowy day, but the weather started to warm the next day, and the "run" began. It shut down at one point when it cooled dramatically, and a howling wind blew the buckets and taps off two of the trees. No harm done, though, as whatever sap was in the buckets was frozen solid.

We removed the taps on March 6, and TKG finished boiling the collected sap. She then canned the whole lot into convenient jelly jars.

I've previously described our small-batch process, but for some reason the links I had are broken. Hopefully by next year I will have reconstructed them!

I'll be back in a few months with some "green" harvests to report. Having things grow still seems far-off now, but it's coming! Until then, please enjoy the posts from other gardeners on Harvest Monday, graciously hosted by Dave at HappyAcres.blog.