Here's another Harvest Monday update from Eight Gate Farm. We've had on and off rain the whole week. We've exceeded the July rainfall record, and the month is not over yet. Tuesday was supposed to be full-sun, but smoke from the massive, scary Western fires had drifted over in the high atmosphere, turning the sky hazy and the sun red.

For "first harvests," we were so glad to get artichokes, truly a Star of the Garden for us. They are very petite compared to the ones that are brought in from California, but oh-so-fresh, and we love them.

Even though the ground was not as dry as I normally like, I felt it was time to pull all the garlic. I grew three varieties this year. This is "Katterman," which I think is a version of German White/German Extra Hardy, selected for size. Only one grower produces this, I think. I'm trying the vertical method of drying this year, as everybody seems to be doing it.
Next we have Georgian Crystal and Russian Red. Georgian Crystal is supposed to be like Georgian Fire, which we like, but a little less bite. Georgian Fire was not available when I ordered. In the background is the meager harvest of Russian Red, too small to hang through the slots. I don't think there's anything wrong about this type, just that the 'seed' garlic was not up to standards so they never grew well.
Once they're fully dried and cleaned I'll talk more about the varieties.
Another first harvest was yellow wax bush beans.
For continuing harvests, I got some more shishito peppers.
More haricots-vert. The Kitchen Goddess bundled them in groups of 7 or 8, and wrapped them in bacon, to make...wait for it..."Bacon Bean Bundles"; an original concept as far as I know. I cooked them on the charcoal grill. Really delicious!
More pea pods. These have really shut down, and I will be pulling the vines this week. Sorry to see them go.
A few more zucchini.
More salad greens. The plants are finally bolting, so instead of just picking leaves I'm pulling up the whole plants and taking what looks good.
Another large fennel bulb.
I cut the last head of Imperial broccoli, and got more side shoots at the same time.
Raspberries are producing lightly. We're using them up as we get them, and not stocking the freezer yet.
And finally a Thursday harvest of collards, chard, beans, and a few more pea pods. Collards look to be a crop that will give an amazing quantity of food value, and I'm grateful to our Harvest Monday host Dave at Our Happy Acres for inspiring me to try them. I just hope they don't start going to seed soon! 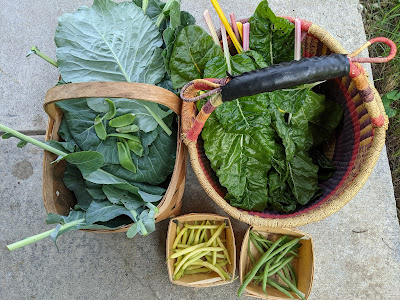 All in all, a pretty good week, giving us lots of meal choices and stuff for the freezer. Thanks for reading, and please join me in checking out the other Harvest Monday posts at HappyAcres.blog.
Posted by Eight Gate Farm NH 2 comments: 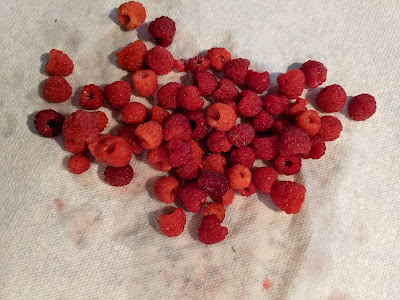 Here's another Harvest Monday update from Eight Gate Farm. Tropical Storm Elsa brushed by us on Friday afternoon, fortunately sparing us punishing winds but dumping heavy rain. Some local reports measured 4.5" (~11.5 cm). There was widespread flooding throughout our town, but being on high ground, we were spared that too. It was funny to drive around the lake and see people's docks under water.

For "first harvests," I have a little story. In my working days, I spent a lot of time on projects in the southern United States. I often frequented "Southern Barbecue" joints where they always served "greens" with the meal. I assumed they were collards, and also assumed they were mostly a southern crop like okra. But seeing our talented Harvest Monday host, Dave, having such success growing them, I decided to give it a try this year. So I bought some seeds for a hybrid variety, "Top Bunch 2.0." This week I cut the first leaves. I had intended to cut a few from each plant, but ended up cutting from only one. Don't worry, there's still many more to come. It looks to be a very productive crop, provided the plants stay healthy.

I made a dish that night with them. The Ever-Helpful Kitchen Goddess instructed me to chiffonade them, which means stacking a few leaves at a time, rolling them like a cigar, then cutting into ribbons. Which I was going to do anyway, regardless of the term. I sauteed some spicy Italian sausage, and was going to wilt the collards in the remaining fat, but the sausage was so lean I had to add some olive oil. I cooked up a batch of our black beans from several years ago, added some of our frozen Arroz con Pollo seasoning peppers, our own garlic, and a bit of our own winter savory herb leaves, which not only adds wonderful flavor, but is said to be anti-flatulent too. Here's the result, which was delicious. Collards definitely have a place in my garden now.
I'm not particularly fond of fennel, but I've started seeds in the past for TKG to plant in the community garden plot she shares with her mother. Mom goes home with them, but since TKG really loves fennel, I grew some to plant here at home for her. I cut the first bulb this week. Her favorite is a raw fennel and pear salad. The plants are very attractive, too.
I cut the first head of "Imperial" hybrid broccoli. This came in several weeks after the early "Blue Wind" variety, but is said to be able to stand up well to summer heat.
For continuing harvests, I got side shoots from the Blue Wind broccoli, whose main heads I cut in the previous weeks.
I also cut another iceberg lettuce head, and picked from the salad mix rows.
In other harvest notes, I did several small pickings of pea pods, both snow and snap (not photographed). I think the heat we had shut down the vines. so we will see if there will be any more coming.
It has been very wet and humid here, and I'm starting to see the first evidence of fungal diseases on the tomato plants. Too bad, because they looked so beautiful up to this point in time.
That's all for this week. Thanks for reading, and thanks once again to Dave at HappyAcres.blog for hosting the Harvest Monday forum.

Here’s another Harvest Monday update from Eight Gate Farm. As predicted, the week started with a three-day heatwave. It was so hot and humid that even a simple chore like watering made me sweat. It ended on Wednesday evening with a dramatic thunderstorm that fortunately spared us any damage, but trees were downed all over the area. Then it began to rain, and it didn’t stop until late Sunday. It was chilly too. I’m sure a lot of spirits were “dampened” <chuckle> for those who had big outdoor plans for the Independence Day weekend.

We did manage to do a little harvesting, though. Leading off with the “first harvests” of the season, I cut a good amount of Swiss chard (aka silver beet). When I was a child my mother used to cook a lot of chard, and I’ve retained my taste for it. For some it’s too bitter.

The Kitchen Goddess went to the community garden plot she shares with her mother, and came back with an impressive kohlrabi haul. Mom didn’t want the greens, so we kept them.

For continuing harvests, I got several pickings of pea pods like this:

And another iceberg lettuce head, which meant another wonderful wedge salad for me. Now when TKG says she’s going to give me a “wedgie,” I don’t automatically run for cover!

We were running out of room in the fridge, so we processed a lot of stuff for the freezer: snow pea pods, broccoli, chard, and kohlrabi greens. The greens sure do cook down impressively!

Between the heat and all the rain, a lot of garden tasks were put off. So I hope to soon be able to do things like weeding and tying up the indeterminate tomatoes. Oh, and I looked back and saw that last year at this time I was already harvesting cucumbers, zucchini, and even shishito peppers. None of those are even close to that stage this year. I really don’t know why.