Welcome to another Harvest Monday. Thanks again to Daphne's Dandelions for hosting! 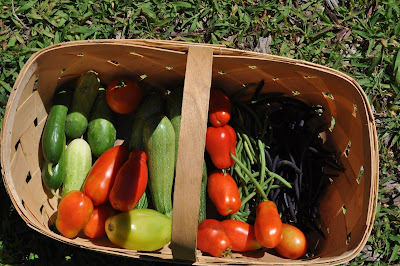 Same old stuff...but wait! Something red!
Tomatoes are finally ripening! Mostly only sauce varieties so far. A few more instances of Blossom End Rot were found, but not enough (yet) to constitute a plague. The big greenish-yellow one at the bottom fell off as I was caressing it...oops. It's a variety called Incas Hybrid. It weighed in at 5.5 oz. (156 g.)--pretty big for a paste-type. Most of the others still on the vines are just as big and blocky.

In the upper left of the photo are two Diva cucumbers, which The Kitchen Goddess swears by. On the right are more purple Velour beans, whose productivity is starting to impress me.


Speaking of tomatoes, I have two "extra" tomato plants in containers next to the Kitchen Garden. They are scraggly compared to the ones in the main garden, but one had two large tomatoes on the verge of full ripeness. Then they disappeared. The Kitchen Goddess saw a squirrel running away with one. I'm afraid it's time to deploy my "squirrel solution." It's fast, it's effective, it's .22 caliber. I know some readers will be appalled, some envious, and the rest will yawn. But I don't think trapping and releasing to become someone else's problem is the right thing. 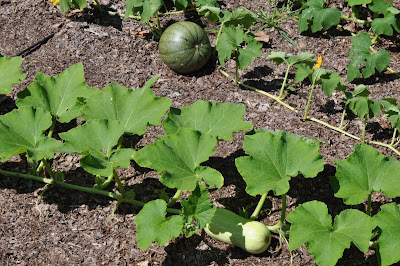 I've written about how I forgot to label when planting my winter squash, and now I don't know what's where. The butternut in the foreground I can identify, but is the one behind it a pumpkin? Or is it a Tatume, which I am trying out this year? Its stem is very thin, which is not pumpkin-like, right? Also, the vine is rooting itself as it goes along. But it looks like a pumpkin... 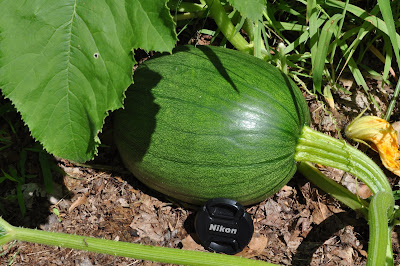 So if that is a pumpkin, this is a Tatume, right? Or is it? Can anyone who has grown them help me out? Here's a younger one: 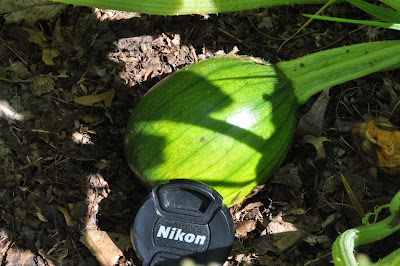 It makes a difference since Tatume is supposed to be both a summer and a winter squash, so I'd like to try some at both stages.
﻿


I've found the first signs of Squash Bugs: egg cases on the underside of some leaves as well as nymphs (all promptly executed), and a single large adult (also executed without mercy). I did not note last year when exactly they first appeared (and were devastating), but I have this year for future reference. So I don't know if I am at the beginning of a true infestation. I think I have a few Squash Vine Borers too. Why does it have to be so difficult to grow crops without harsh poisons? 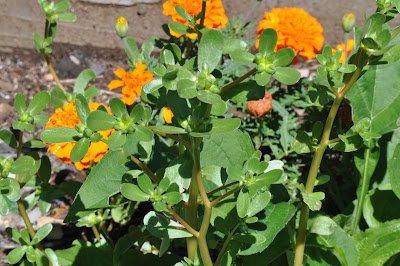 I bought a packet of Green Purslane (Portulaca oleracea) from Baker Creek to try out in the Kitchen Herb Garden. I'm not sure now why; it was in the Herb section but it turns out to be more like a vegetable. It got off to a slow start, but now is really coming in. It is supposed to be super-healthy for you, loaded with antioxidants, whatever those are. It can get invasive, so I cut it back. 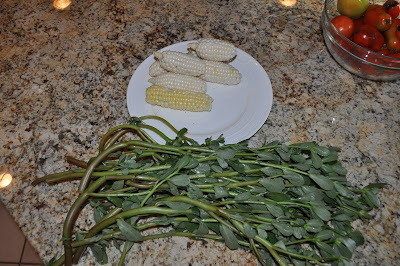 Here it is, ready for cooking. [Pay no attention to the pathetic ears of corn in the background.] I ended up composting the stems of pencil to chopstick size, thinking they would take too long to cook. But I bet they would be good in soups. I ﻿sauteed the tops in EVOO, took them out, then sauteed onion, garlic, tomato, mushrooms, and oregano, and finally added the purslane back in and crumbled feta cheese on top, for a Mediterranean dish (according to Wikipedia). 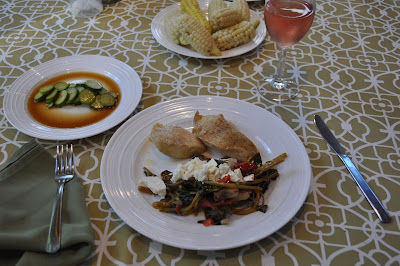 Here it is as served, with chicken and the Divas in an Asian cucumber salad. The purslane is slightly tangy and compliments the other flavors. 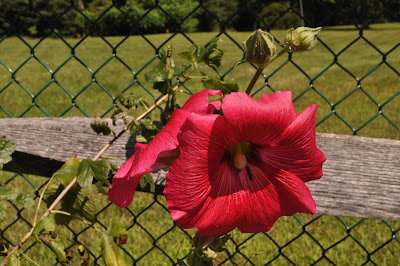 Finally, a cheerful hollyhock for your Monday. Happy gardening to all!﻿