In 2014, the potatoes we harvested in September lasted in storage until May of this year before the few remaining softened and sprouted. They were kept in a bushel basket packed with shredded paper (hat tip to Rachel for that method), in a dark closet in the guest suite of the house, where the temperature through the winter was a fairly constant 50 degrees F.

This fall we started using that part of the house, because of renovations to the upstairs bathroom. I built some storage bins and put this year's potato crop in the cellar. It turns out the cellar, because of the weird warm fall weather, had much higher temperatures and humidity than I was expecting. Result: nearly all the potatoes sprouted after three months. So what to do with them?

I guess some sort of freezing methods could be used, but we are really trying to keep from adding more stuff to our two freezers. So we decided to try dehydrating potato slices. I'm using the royal "we"; The Kitchen Goddess did the work as usual.

Here is our method:

Slice as many potatoes as the dehydrator will hold, to 1/8" thickness. 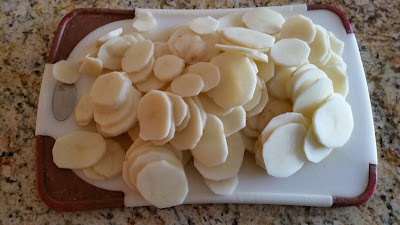 A mandoline makes this much easier and more exact. 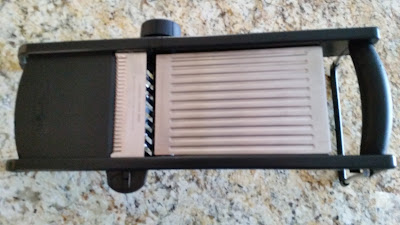 Blanch the slices in salted water for 8 minutes. 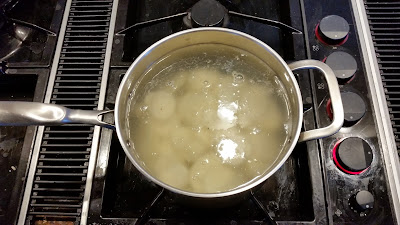 Chill in ice water for 15 minutes.

Pat-dry the slices, and arrange on the shelves of the dehydrator. We just have an entry-level NESCO "American Harvest" machine. There are other brands and models which are undoubtedly better and more efficient, but this one meets our needs (mostly), and has for years. 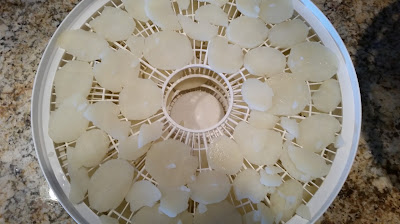 In our machine, it takes about 5 hours. Meanwhile, spend two hours cleaning potato starch off everything.

The dried slices, now like thick potato chips, can be used in Au Gratin-type recipes, and reconstituted for mashed potatoes. Not as versatile as whole potatoes, but as said, this was a rescue. Since we had 15-20 pounds of potatoes to go through, this is a batch process over several days. We just add to gallon bags as we go. 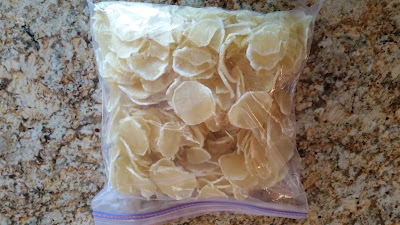 Can you think of other ways of preserving sprouting potatoes, and what to do with them?
Posted by Eight Gate Farm NH