Hello again from Eight Gate Farm. When I woke up yesterday morning (Sunday) there was a weather alert saying virtually all of New Hampshire would suffer a frost that night. But as the day progressed the alert was removed, so we took a chance and didn't cover the sensitive crops. Though the day turned out nice, we still lit the wood stove in the afternoon to take the chill out of the house. So, it starts. The temperature this morning was 41, so the crops were safe, but probably not so very pleased.

There is only one first harvest to feature. We took a few leeks to check on progress and thin the bed a bit, not that it makes much difference at this stage. These are "Carentan," an old heirloom variety. You can see that while not very big (1/2 in. diameter), they have a pleasing amount of white shanks. 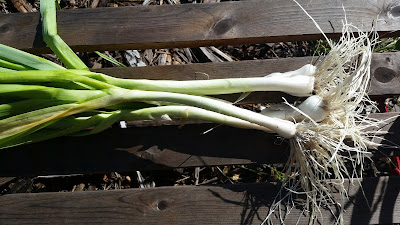 Still many more of these to harvest. The Kitchen Goddess cut off the green parts and used them to enhance a chicken stock she was making.

For continuing harvests, here are zucchini and red raspberries: 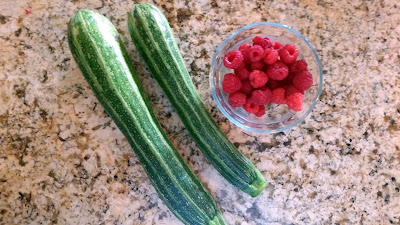 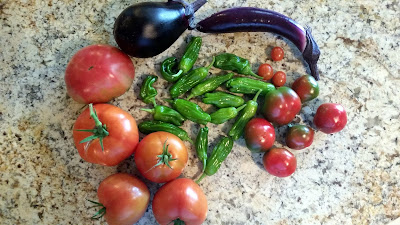 By the way, once again the "Mellow Star" shishito peppers (in the middle) have not produced a single hot specimen.

Zucchini, wax beans (the absolute last for the season), watermelon radishes, raspberries, and a WINO (watermelon in name only). 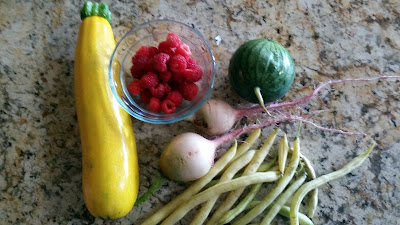 The other day we stopped at a farmstand to pick up sweet corn. They were selling red raspberries like these for $4.99 per half-pint. I know that home gardening is a hobby only, and can't really be justified on a cost-basis. But at this price, the gallon we've picked so far this year is "worth" $80! Of course, you have to balance that against the pint of blood shed working in the canes.

A basket of solanacea, with another "Rosita" eggplant showing off to its cousins. Some of the tomatoes are a little underripe, picked in anticipation of the aforementioned frost. 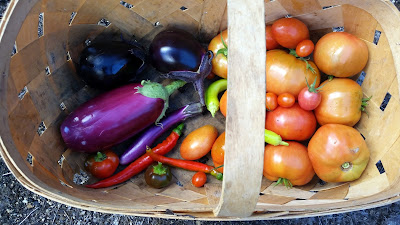 I want to say a little bit about Rutgers tomatoes. They really are a staple here. They are productive, fairly disease-resistant, and have outstanding flavor. They are dual-purpose, good for sauce and fresh eating. Here's a good example, weighing a little over 12 ounces. If you are looking for a determinate tomato, I highly recommend Rutgers. 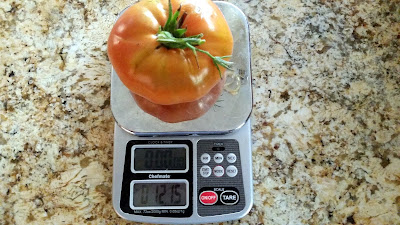 And here are the absolute last of our cucumbers (yay!). The vines were getting pretty diseased and tired, so out they came. But what an amazing year for them. 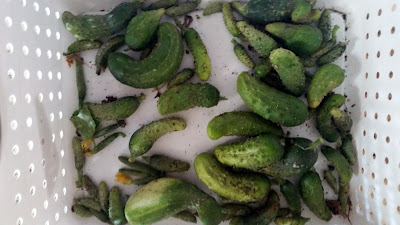 That's all for this week. Thanks to Dave at Our Happy Acres for keeping the Harvest Monday tradition flourishing.
Posted by Eight Gate Farm NH