Greetings fellow gardeners! We had several "first" harvests this week, and a number of continuing ones.

The "first" first needs no introduction: 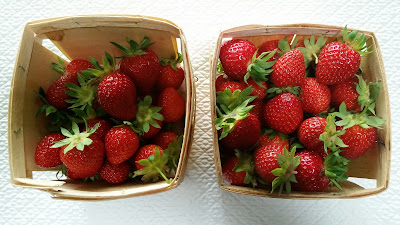 There are two varieties, the everbearing "Oglalla" on the left, and the June-bearing "Surecrop" on the right. Wait, didn't I say it needed no introduction?

The thing about strawberries is once they start rolling in, they just keep rolling in: 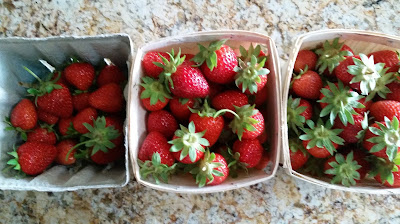 The Kitchen Goddess has already canned 8 jars of strawberry jam: 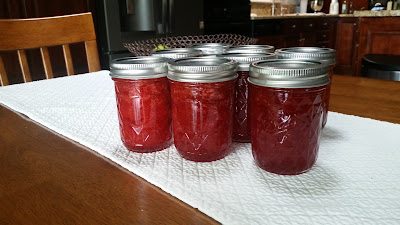 The other first harvest was some garlic scapes: 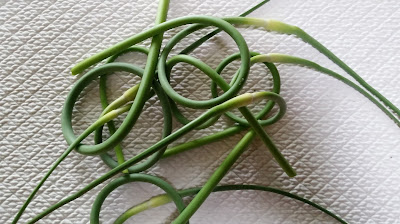 I planted six each of four varieties of garlic last fall. One variety ("Katahdin") is 2-3 times bigger than its mates, and produced these scapes well ahead of the others. I don't know if it's the variety, or maybe just the cloves were bigger to begin with. I don't remember.

For continuing harvests, we took all but one of the remaining Ching Chiang and tatsoi, as they were severely bolting. A couple qualify as runts, but it's all good. 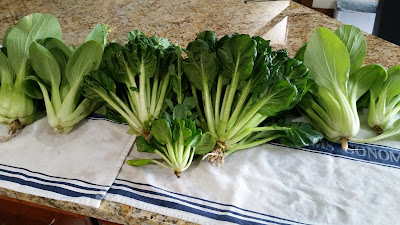 Also bolting was the cilantro, so out it came. 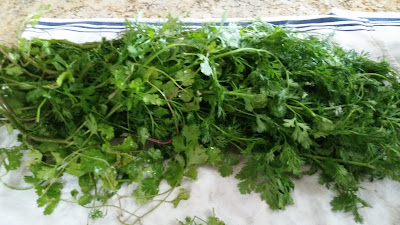 TKG froze most of this in small covered containers with olive oil. She says that's better than water for keeping them. I had not heard of that before. I've said in the past that cilantro is one of those things I can't grow myself; they always bolt when two inches tall. These came from a six-pack of crowded-together seedlings purchased at a local farm/greenhouse, and I planted them all together in a jumbled mess. But that seemed to work, and I will try that method of starting them next year.

Next up is more salad mix. I like the method we are using: two 4-foot rows with the seeds tightly sown. You just pick off the leaves you need, and the remaining expand to fill in the gaps, then repeat. We used two variety-packs from Baker Creek: "Mesclun Mix," of which about the only thing I can identify is kale but there are many other components, and a more traditional lettuce mix called "Rocky Top." This method just seems more productive than growing heads, and it sure is easy too. 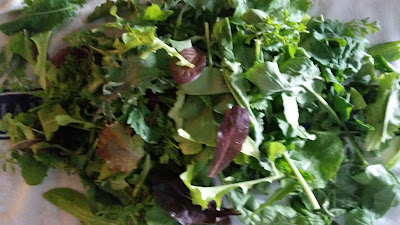 That's all the representative harvests for this week. One more picture to share though. In the Kitchen Herb Garden the sage decided to send up a flower. I know this is not unusual, but I've never had it happen before. It is lovely. 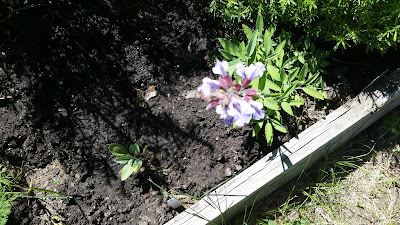 Thanks for reading, and thanks again to Dave at Our Happy Acres for keeping Harvest Monday going.
Posted by Eight Gate Farm NH