Welcome to another Harvest Monday report from Eight Gate Farm. As usual I lead off with the "first of the year harvests" for this past week.

The Kitchen Goddess picked all the grapes herself, then spent much of Sunday afternoon sitting cross-legged on the floor sorting and stemming them, an unenviable task. Thus her 2017 blush wine vintage commences. 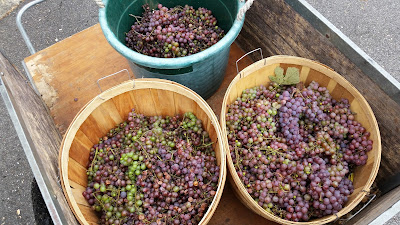 Meanwhile, I picked a good portion of the black beans and spread them out to dry on a window screen in the sunroom.

Next up is continuing, and in some cases last harvests. Sweet corn is still in good production, and so is the zucchini.

The zucchini is Cocozella di Napoli. It's sometimes billed as a "bush" variety, but it's far from it. Instead, it produces very robust 4 - 5 foot vines. It's therefore a space hog, but worth it for the productivity and superior taste. It's prone to powdery mildew, as the below photo shows, but it doesn't seem to slow it down. 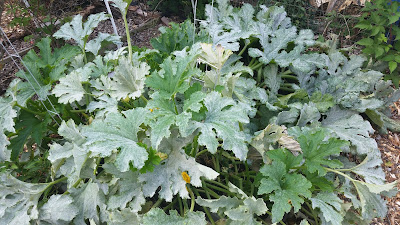 Here's the last muskmelon, and the last, neglected Diva cucumbers. Hard to believe we actually were sated with the Divas this year, and weren't sad when wilt took down the vines.

We had many pickings of solanaceae. 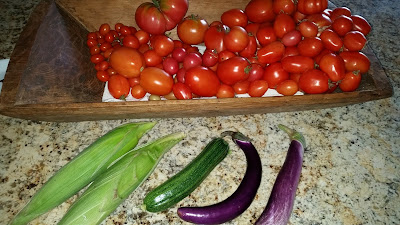 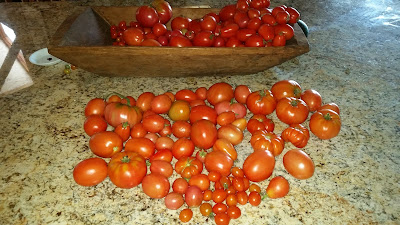 Notable is the harvest of Anaheim peppers. I've never grown them before, and they look to be a winner. They are mildly hot (900 - 2500 Scovilles says Fedco), and are perfect for chiles rellenos, so guess what's in my future. Yum.

This photo looks like one of those emergency harvests you make when frost is imminent, but we have no frost expected in the near future. Tropical Storm Jose is expected to brush us in a few days, which won't be good for the plants. But mostly, I was sick of looking at the dead, blighted tomatoes, so I took what was there to ripen indoors, and disposed of the vines. The indeterminate vines, while diseased, are still producing, so there will be more tomatoes before the inevitable frost. 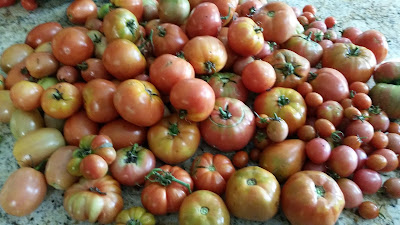 That's all for this week. I hope you are getting great harvests from your gardens, and look forward to reading your posts at Harvest Monday, hosted by Dave at Our Happy Acres.