Here's another [too long] Harvest Monday update. Tropical Storm Isaias passed through
late Tuesday afternoon, well to the west of us, but we still got high winds and some heavy
rain, not enough to put a dent in the drought unfortunately. We lost power for about 14 hours.

Starting with the first harvests of the season, we had quite a few. The first big tomatoes came in. Here is Brandywine, for many the gold standard of heirloom tomatoes. This one did not disappoint. It weighed just over a pound.

I obtained quite a few free packets of tomato seeds, and I've planted a lot of different varieties that are new to me. Here is Brandy Boy, a hybrid with Brandywine parentage, that shares its potato-leaf structure. It's supposed to be earlier, more productive, and more reliable, yet still have the Brandywine taste. So it's odd that real Brandywine came in several days earlier. This was just under a pound. Okay, so how does it taste? I would say if you've never had a perfect Brandywine you just might say it's the best tomato you've ever had. So while it may not replace Brandywine, it can supplement it.

This is BushSteak, a hybrid determinate that makes full size fruits. I was a bit surprised
that it had full flavor that we both really liked. I'll grow this again.

Here is Burpee's Early Pick, a full-size indeterminate hybrid. It too had really nice flavor, and looks to be productive.

These little beauties have an interesting story. A fellow Master Gardener gave me the seeds, which he calls "Ascension Island." He originally got them from his son, who collected them while he was stationed in the military on that lonely South Atlantic outpost. It is surprising that they grow so well here, with our polar opposite climate. It's an indeterminate. We could not believe how tasty they are.

Here is Red Siberian. The seed packet said it was an indeterminate, and I grew it as such
(staking, single-stemming). Turns out it's really a determinate. I will grow it that way next year. It has good flavor, a balance of sweet and acidic.

Here is Wisconsin 55, another determinant with a heritage. The flavor is really good. It's a keeper too.

First harvest tomatoes that I've grown for years include Oregon Spring, a cold-hardy plant as the name implies. I'm guessing it doesn't like all the heat this year, as the plant has not grown very much. Still, it gives some fruit, which has a very pleasant taste.


Another is Roma, which most gardeners are familiar with, and is a workhorse for us.


For "first harvest" peppers, we got a sweet, fully-ripe Jimmy Nardello's.

Also some Serrano Tampiquenos. This type is about 50% hotter than a jalapeno. Just the two of them really spiced up a fresh salsa I made.

Another first harvest was this "Halona" muskmelon, perfectly ripe and absolutely luscious!

Last of the first were these flat-podded Romano Bush beans.

For a sampling of continuing harvests, I picked these Anaheim peppers, and The Kitchen Goddess made more chiles rellenos, this time stuffing them with spicy chorizo sausage. Wow!

More jalapeno peppers. She made poppers again and I smoked them; just as delicious and spicy as last time.

More sweet corn. I devoured two or three ears each night this past week. You can tell I love it.

A zucchini that got away from me. This plant is still hanging in there, but squash vine borers killed my two yellow zucchini plants.

And finally more tomatoes. This is Juliet, Gardener's Delight, and Yellow Pear. Phuong, who writes the Kentucky Fried Garden blog, is also growing GDs and asked me if I found them "oddly tart." I would say they have a pretty good balance, maybe leaning toward the sweet side. I guess it's a climate thing.

Lastly, TKG and her Mom went to the community garden plot they share, and Mom went home with this spectacular haul. The big cannonball is a five pound Sugar Baby watermelon. They even let me have a slice! It was super sweet. Also note the beautiful fennel at the top. 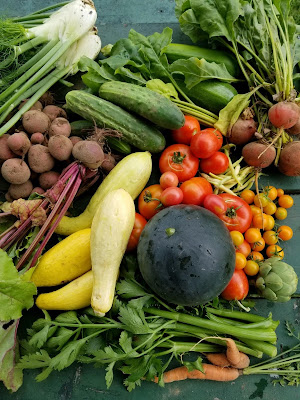 That's enough for this week. Thanks for sticking with it! And a big thank-you to Dave at HappyAcres.blog for continuing to host Harvest Monday.
Posted by Eight Gate Farm NH