Here’s a Harvest Monday update from Eight Gate Farm. The past week began with a “heat wave,” which ended with a strong downpour, then the temperatures moderated for the rest of the week. Overall, this had a positive effect on growth and harvests.

For “first harvests” of the season, we got several cuttings of salad greens. I grow two different mixes, both from Baker Creek Heirloom Seeds. One is called “European Mesclun Mix,” and looks to consist mostly of brassicas. The other is “Rocky Top Mix,” which looks like mostly loose-leaf lettuces. They both get thrown together in our salads. It is very nice to not have to buy salad from the store.

We also got several cuttings of turnip greens. These will go into our morning smoothies. The variety is called “Shogoin,” which produces white roots, but we are mainly going to harvest the greens.

We also got the first cuttings of garlic scapes. This “byproduct” of hardneck garlic growing has many culinary uses. We had some briefly cooked on the charcoal grill, and they were delicious.

For continuing harvests, we took the last of the “Asian Delight” bok choy, now starting to bolt. I love dishes prepared with Asian greens.

We had company over for dinner, and The Kitchen Goddess picked flowers from our garden to make a fragrant centerpiece. This came out really pretty, I thought. There are roses, peonies, and yellow and white yarrow. I like everything about peonies except their short blooming period. 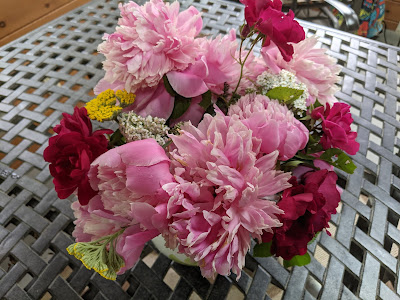