A cocktail napkin sums up my view of the heat and humidity this past week: 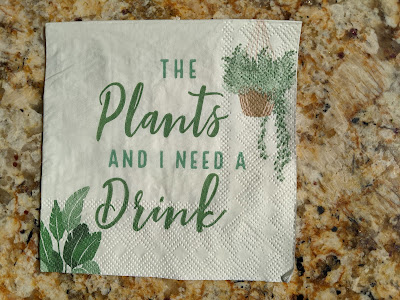 It was good for harvesting, however. Here are the "first harvests" of the season, starting with tomatoes. This is Burpee's Early Pick, which is a hybrid indeterminate with good sized fruit. The taste is quite good, too. We rated it 7.5 out of 10.
Here's "Ascension Island." Though I love the story of how it was originally collected by the son of a fellow Master Gardener, I can't say it's really a unique variety. No matter, it's really tasty, and we give it 9 out of 10.
This is Vilms, an OP indeterminate sauce tomato. Fedco recommended it for its disease resistance.
And this is the old workhorse, Roma:
By the way, you may be thinking I pick many tomatoes when they aren't completely ripe. This is true. It actually doesn't make a difference, as once the fruit reaches the "breaker" stage (half green and pink) the plant seals them off. So it's much safer to let them ripen indoors. Here's a link to a university article on this subject: https://www.johnson.k-state.edu/lawn-garden/agent-articles/vegetables/harvest-ripen-tomatoes.html
A number of peppers made their first appearance this week. Here is Cubanelle, a mild frying pepper.
Here are two different mildly spicy Poblano peppers. On the left is the original OP version, on the right is an "improved" hybrid called Rellenos Best. There really isn't much difference between them to be honest. We typically stuff and smoke these for a real treat.
And here are original OP Anaheims, and the "improved" hybrid Highlander. Again, not much difference. These are also mildly spicy, and we typically turn them into chiles rellenos.
I liked the experience of growing Alma Paprika last year, and drying it for the spice. So I started 4 plants this year. Three of them got destroyed. I bought "Hungarian Cheese" plants as a replacement. These are traditionally stuffing peppers, but I'm hoping to dry them instead. Not sure if it will work. One of the plants gave its first ripe fruit this week.
I'm growing both Nadia and Midnight Queen eggplants this year, which are very similar in appearance. Midnight Queen is supposed to be earlier, and it was, but not by much, as Nadia will be right behind it.
To me, one of the most challenging tasks is figuring out when sweet corn is prime for picking. You look for clues, such as silks drying, ears filling out, and the number of days since sowing, but it's never exact. This year, my first batch seemed to go slowly, and the stalks (and corresponding ears), didn't grow like before. But they were way overdue from a date perspective. So I picked four ears to try.
The result? Two were definitely immature and lacked intense sweetness and flavor. Two were pretty good, but not completely what I expect from this variety. I'll just have to keep trying!
Four years ago I planted a peach tree. It's had some setbacks, and gave us nothing last year, but this year it's loaded, more than the tree can handle, as the main branch snapped off. So I thought it best to pick the tree clean. Here's the result. The peaches are small, more like apricot size, but sweet and fragrant.
For continuing harvests, here is Monday's: 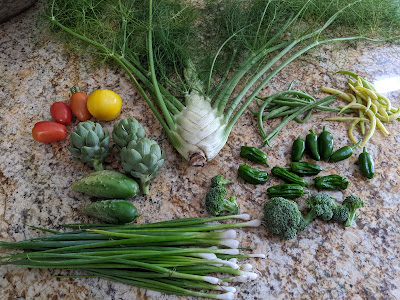 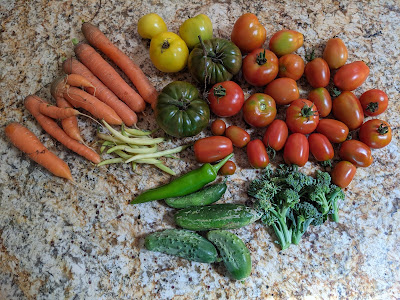 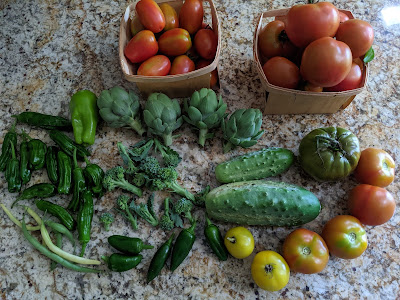 Also on Friday was this nice basket of collards. I continue to be amazed at this crop.
I planted the artichokes into the two steel stock tank beds this year. As the planting looked skimpy at first, I also sowed zinnia seeds. Guess the zinnias got a little aggressive!
That's the situation this week. Apologies for going long. Thanks for reading, and thanks as always to Dave at HappyAcres.blog for hosting Harvest Monday.
Posted by Eight Gate Farm NH