Hello again from Eight Gate Farm. This week was mostly cool, damp, and dreary. Not at all like our normal early fall weather. The harvests are slowing way down, yet a few new crops were brought in.

My first picture is of a heatless habanero pepper called "Habanada." The seedling was given to me by a friend. I never really saw the point of growing heatless hot peppers, but I was happy to give this a try. Cutting them open, they released the same aromatic fragrance of real habaneros. Tasting them (something I wouldn't dare try with a habanero), they are very sweet, fruity, and rich. I can see how they would be good aromatic peppers to flavor things like beans. I might save some seeds. But the plant itself is a shy producer.

The summer-planted "Minuet" Chinese cabbages looked to be ready, and we needed one for a dish. They actually were on the small side, so I took two.

This is a volunteer squash that grew up in the compost. I've never grown anything resembling this, so when the fruit formed I was very puzzled as to its origin. Then The Kitchen Goddess remembered we bought some small ornamental pumpkins at the market last year. Well, no need to buy them this year!

I cut the first two "Lilly" hybrid crenshaw-type melons. These are another creation from Johnny's Selected Seeds. They are very sweet, yet also hold some of the muskiness of cantaloupes.

Three years ago I planted 3 bare root vines of the red wine grape "Marquette." This is a product from the University of Minnesota's project to develop cold-hardy, disease-resistant wine grapes for the North. TKG has been carefully pruning and trellising the vines, and she picked the entire crop this week. Right now they are undergoing fermentation. We have high hopes, as the grapes measured an outstanding brix level of 25.

For "general harvests," Tuesday's was small enough to fit in one picture.

TKG did some amazing pickings of fall raspberries. Here's one at over 2 pounds. She decided to start a batch of raspberry liqueur with them. I know I'll enjoy sipping it in winter.

It wasn't until Sunday that I ventured out again into the gardens to harvest. The cool weather had really slowed things down. But I got a good cutting of greens (collards and kale). These were immediately chopped and frozen.

I also got celery, carrots, paprika peppers, pole beans, shishitos, and a couple of eggplants.

I also got quite a few hot peppers. The top row consists of Sugar Rush Peach, cayennes, and Hot Lemon. The bottom row is guajillo, serrano, and habanero.

On Saturday TKG and her mum went to their community garden plot, and made off with quite a colorful haul. All proceeds go to Mom. 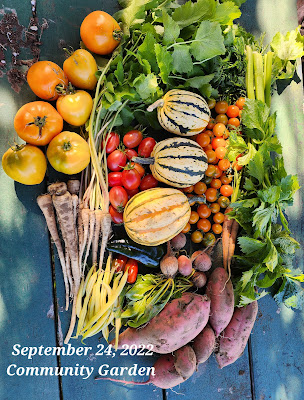 Since the cold and dampness kept us indoors, it was a good time to do some preserving. I made three simple varietal hot sauces. I ordered more of those cute 5-ounce bottles, but they are twice delayed in shipping, so I had to put the sauce in jars temporarily. From left, fiery-hot habanero, medium-hot cayenne, and very hot Hot Lemon.

Whatever cayenne peppers did not go into sauce were dehydrated and ground to make a robust chile powder.
On Sunday I did something I never thought I would do. I pulled out all the zucchini, shishito pepper, broccoli, and pole bean plants, even though they were still productive. We've just had enough of them, and friends are pleading with us to give them no more. I may do the same with most of the hot peppers; again, we are at our limit of things to do with them. What a year!
Thanks for reading, and thanks again to Dave at HappyAcres.blog for hosting Harvest Monday.