Welcome to another Harvest Monday, courtesy of Daphne's Dandelions. I'm guessing that for many of you, at least those fellow gardeners in Zone 5, this was the best harvest week of the year so far!

There's nothing like sunflower season, cheerfully giving back some glory to the Sun: 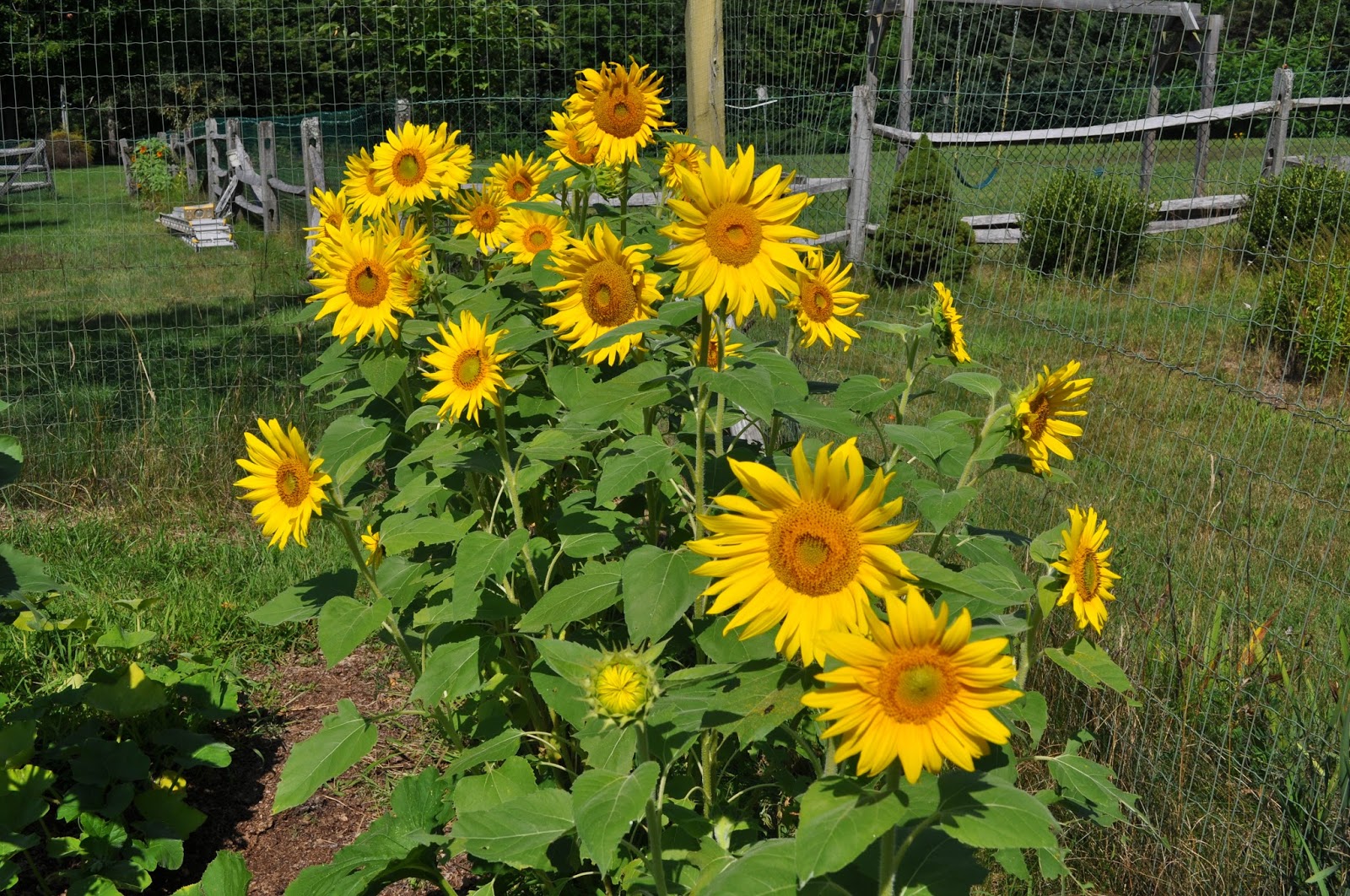 The sunflower heads you see at the top of the following picture were volunteers in the tomato patch. I think they were dropped there by birds going to and from the feeders. Normally I would wait to cut the heads for drying after the flowers had wilted more, but since the birds were already pecking at them I figured they know more than I do. Also pictured is a fist-sized 'Waltham' broccoli head, another one that was supposed to wait until fall. And of course a basket of beans, which are still coming on strong; in fact, this was the second basket this week. 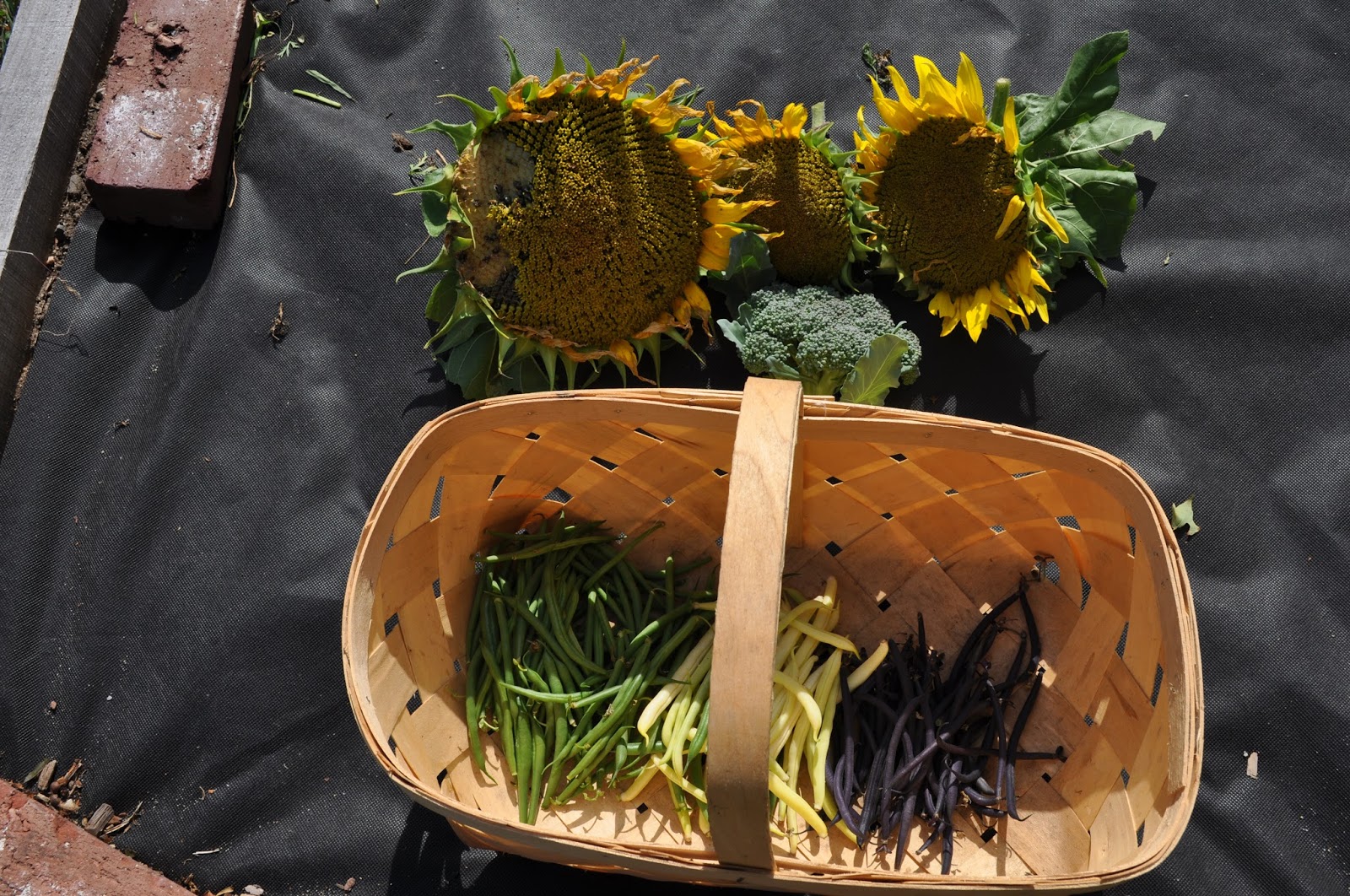 In the following photo are four of the eleven zucchini harvested this week, and maybe half of the tomato harvest for the week. Some of the zucchini was put by The Kitchen Goddess into Chocolate Zucchini Bread, after seeing several Harvest Monday people doing it. Also, something new! A handful of hot 'Cherry Bomb' peppers. 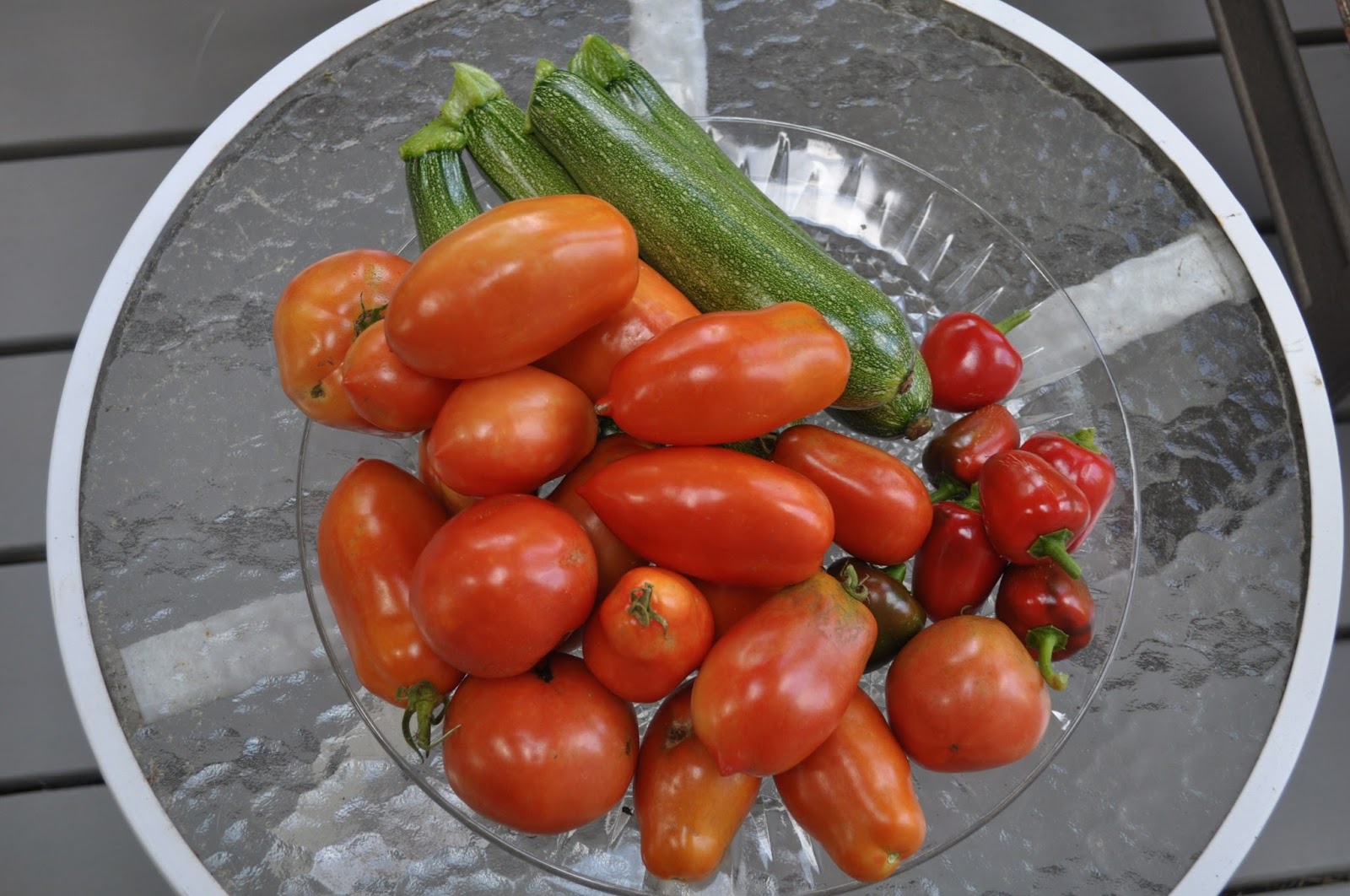 A "few" carrots were taken: 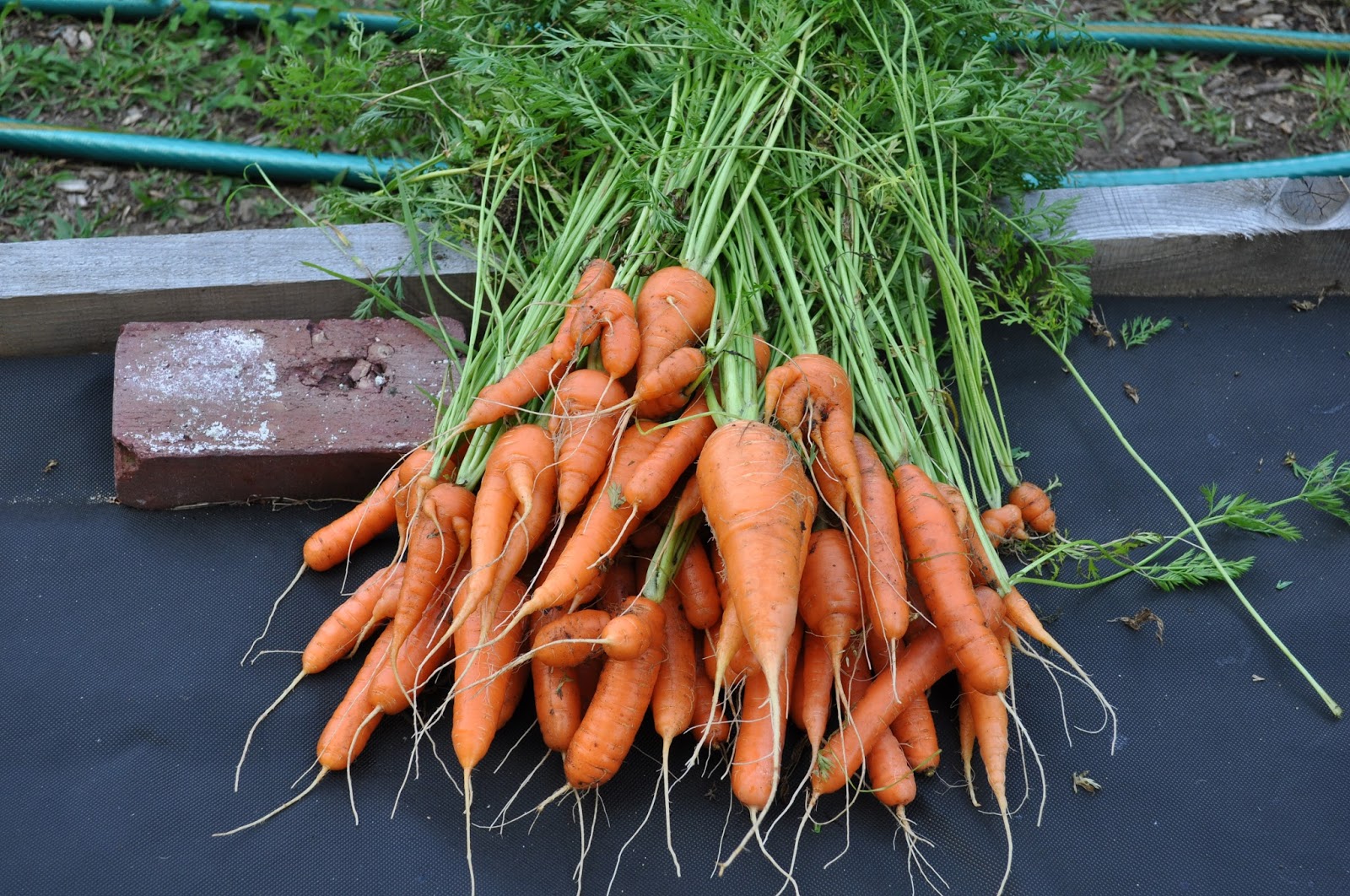 Not to worry, this is only about a third of the first planting from April 17. And there is a second planting of the same amount. I'm beginning to wonder what I was thinking. There is a disturbing number of deformed ones...is it just soil compaction or is there something weird about the soil chemistry that can cause this? No matter, cut up no one will ever know!
This was the biggest one: 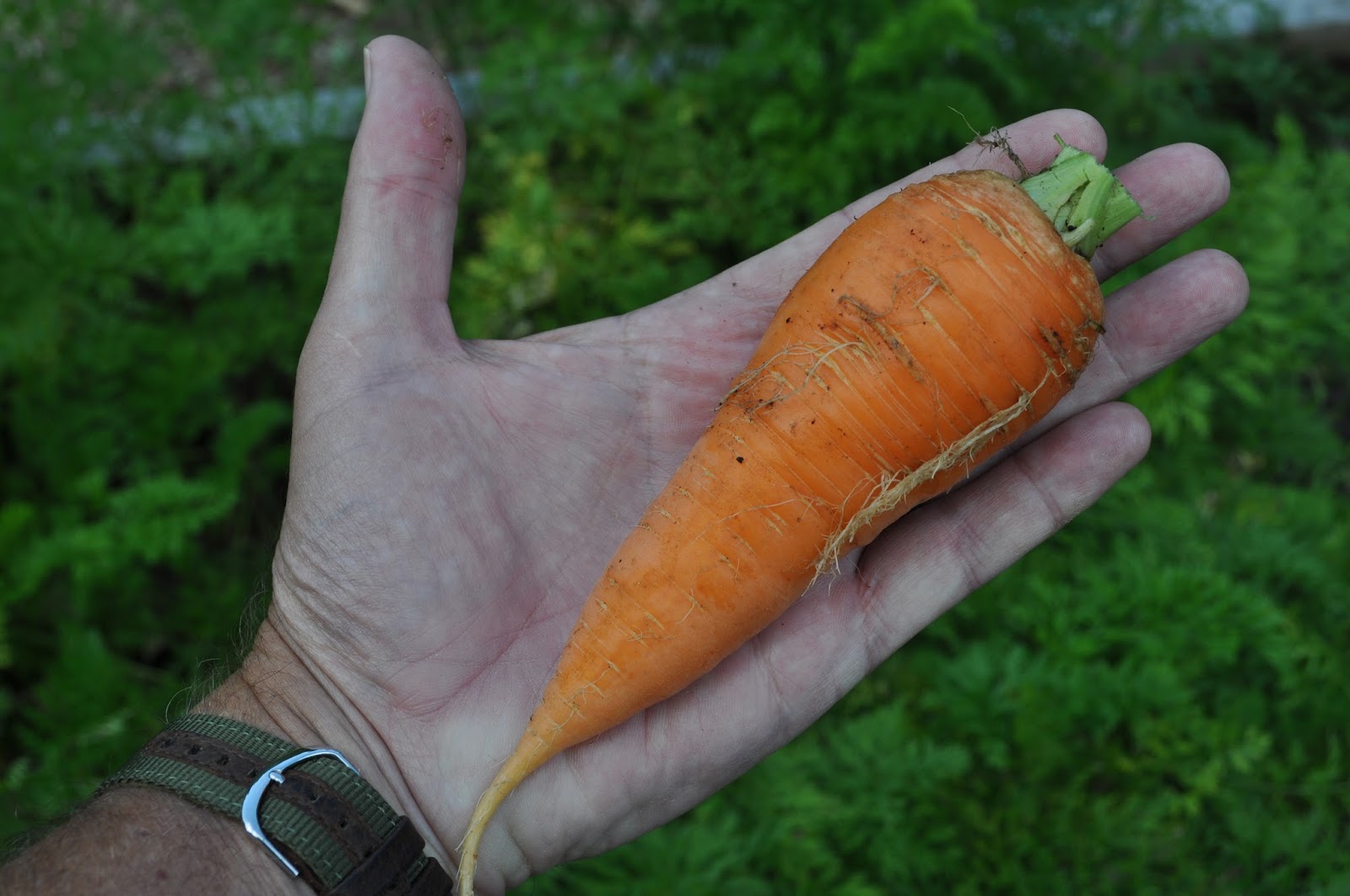 Still a few blueberries; just enough for The Kitchen Goddess to make blueberry compote, sweetened with our own pure maple syrup, for Sunday morning pancakes. 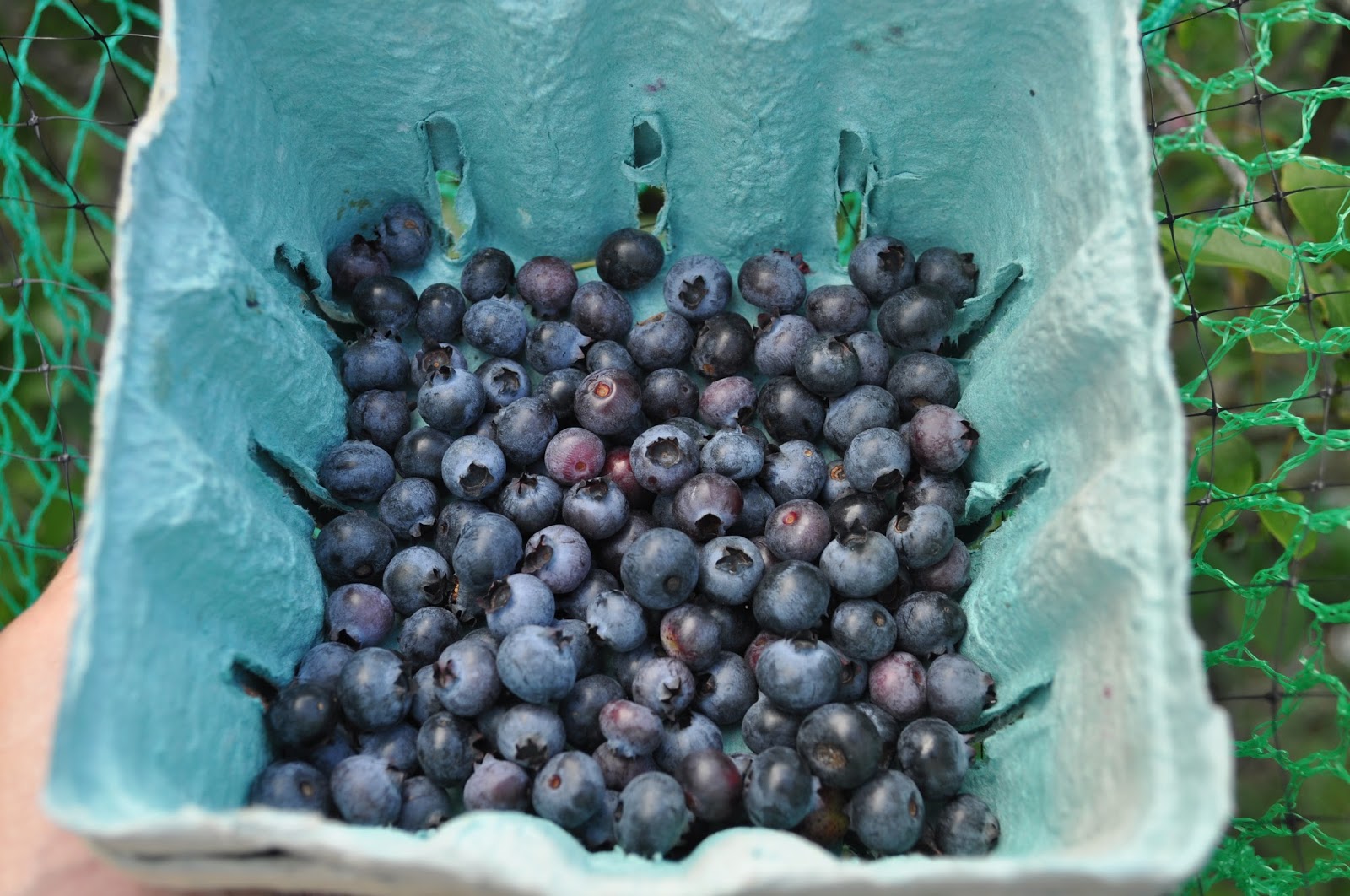 Normally I let the corn stalks dry in the field, but this time I decided to cut them off and start composting them when they were still green. No point in them sucking up more soil nutrients than they should. You may ask why I did not just pull them up. The simple answer: I like the way corn stubble looks poking out of the snow. 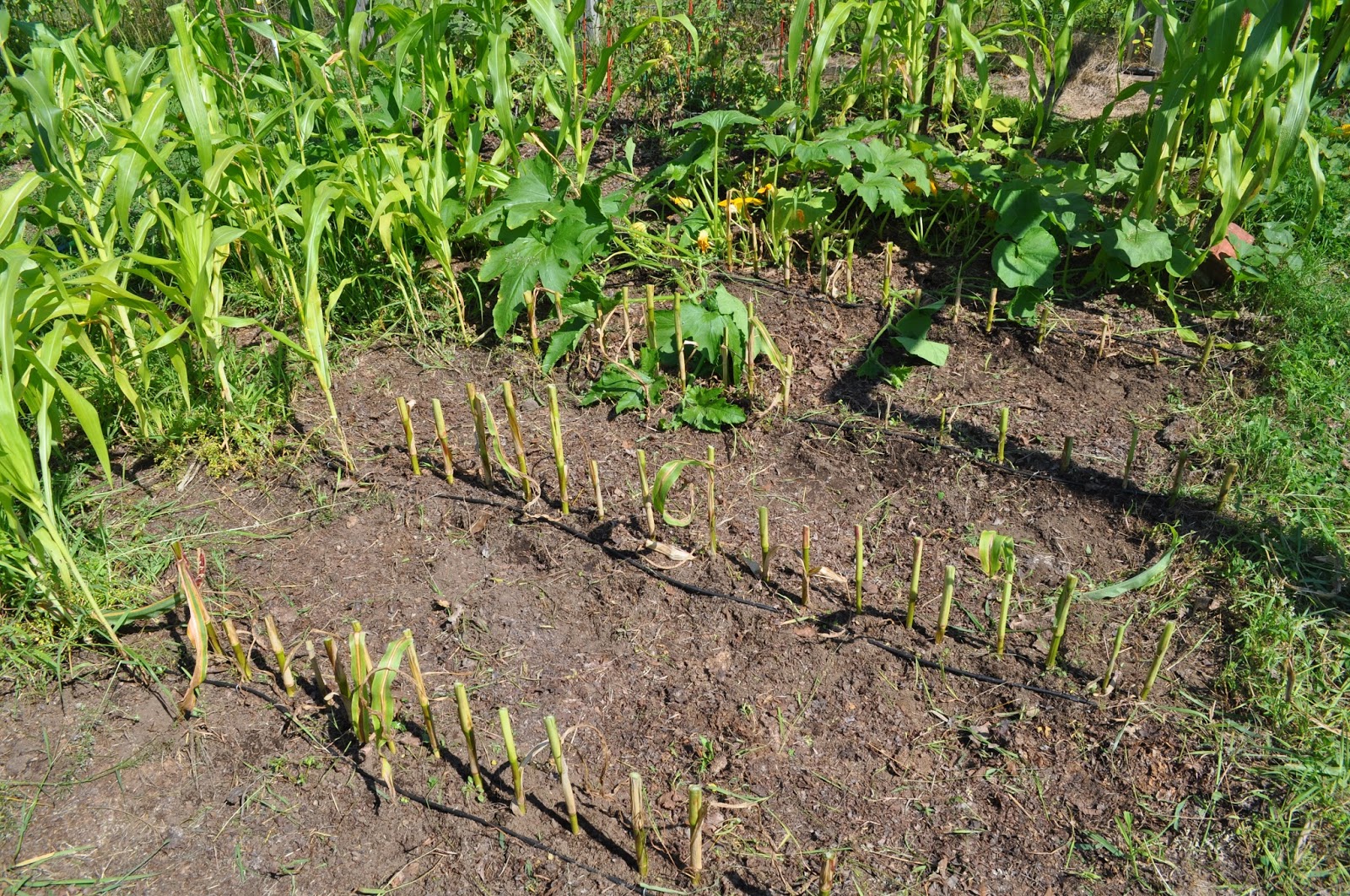 I managed to take a dozen or so "baby" corn ears from the above cutting. Yes, there is a reason I'm not displaying a photo of them peeled. Whatever ate the corn silks prevented them from fully filling out. But we still got the "taste" of corn.

I haven't talked much about our grapevines yet. We inherited three 12-foot trellises with old vines when we bought the property, and have added two more. At some point they made wine here, because we found a few empty labelled bottles in the barn. The inherited vines had been neglected for years. This year we really pruned them hard to try to rejuvenate them. They bounced back, and are behaving, but there is another problem. They are infected with black (or brown) rot, which causes the berries to wither on the stem into what is called "mummies." I've been spraying weekly with Liquid Copper fungicide, but it has had limited effect. Unless someone out there knows another organic preventative, I'm seriously thinking about moving on to the harder stuff, as much as it pains me. 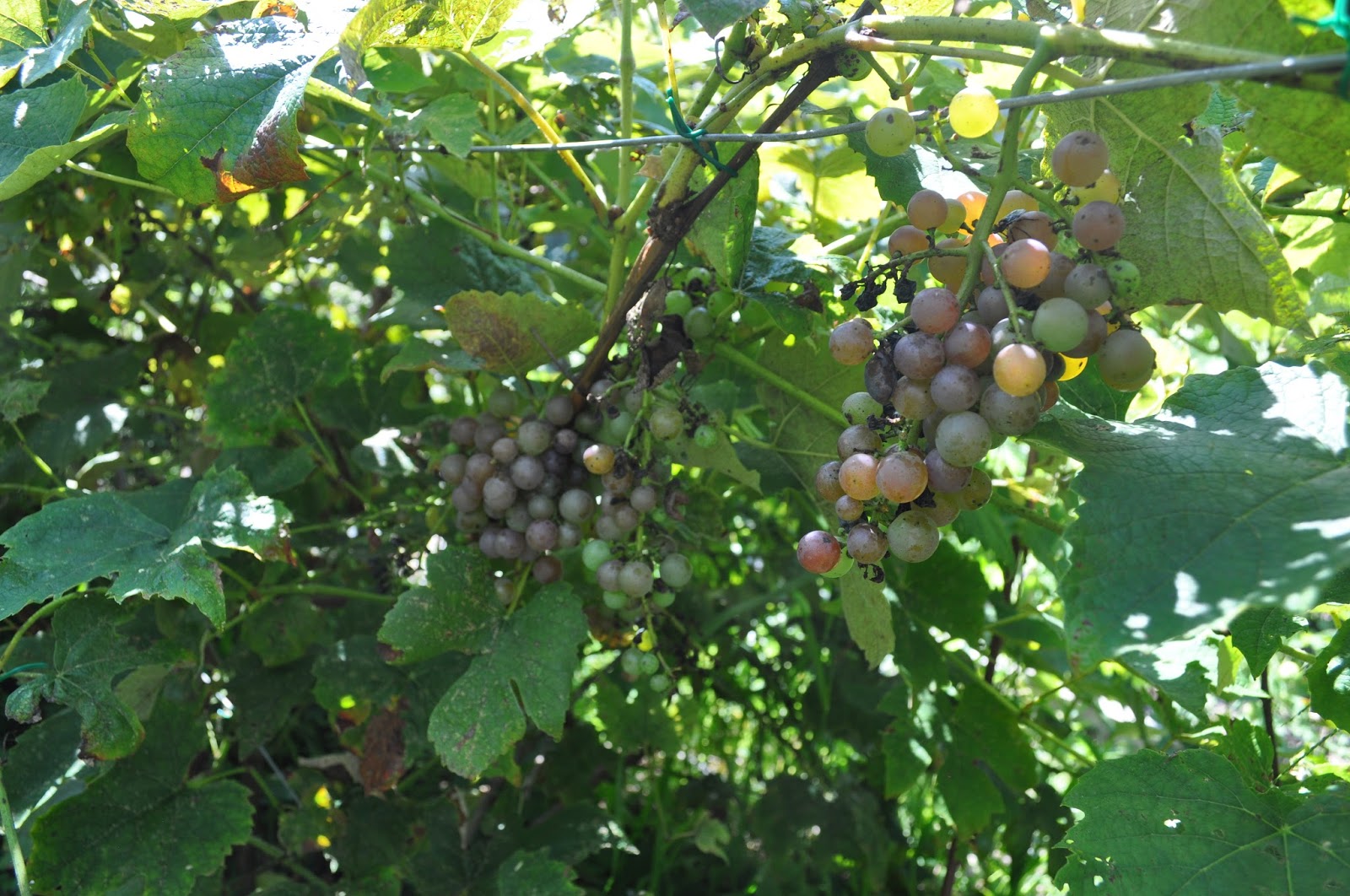 Given the large number of mummies, which should be removed from the area to help stop re-infection, we decided to pick all the grapes we could find, ripe or not. So this might look like a pretty good haul, but very little is usable. 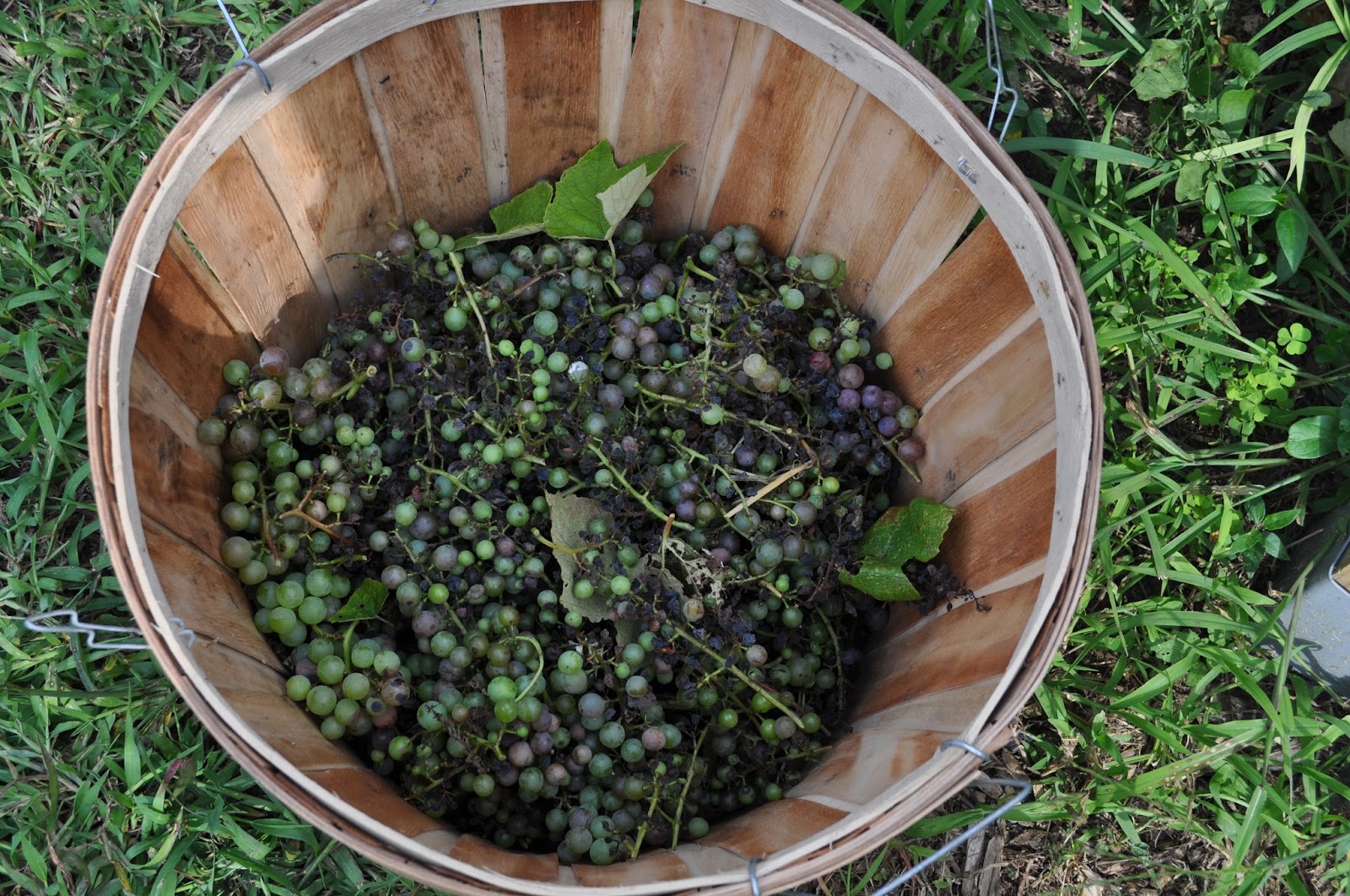 Good news on the squash front. Last weekend I crawled around on my hands and knees picking off all the Squash Bug eggs and nymphs I found. By this weekend there was no further sign of them. 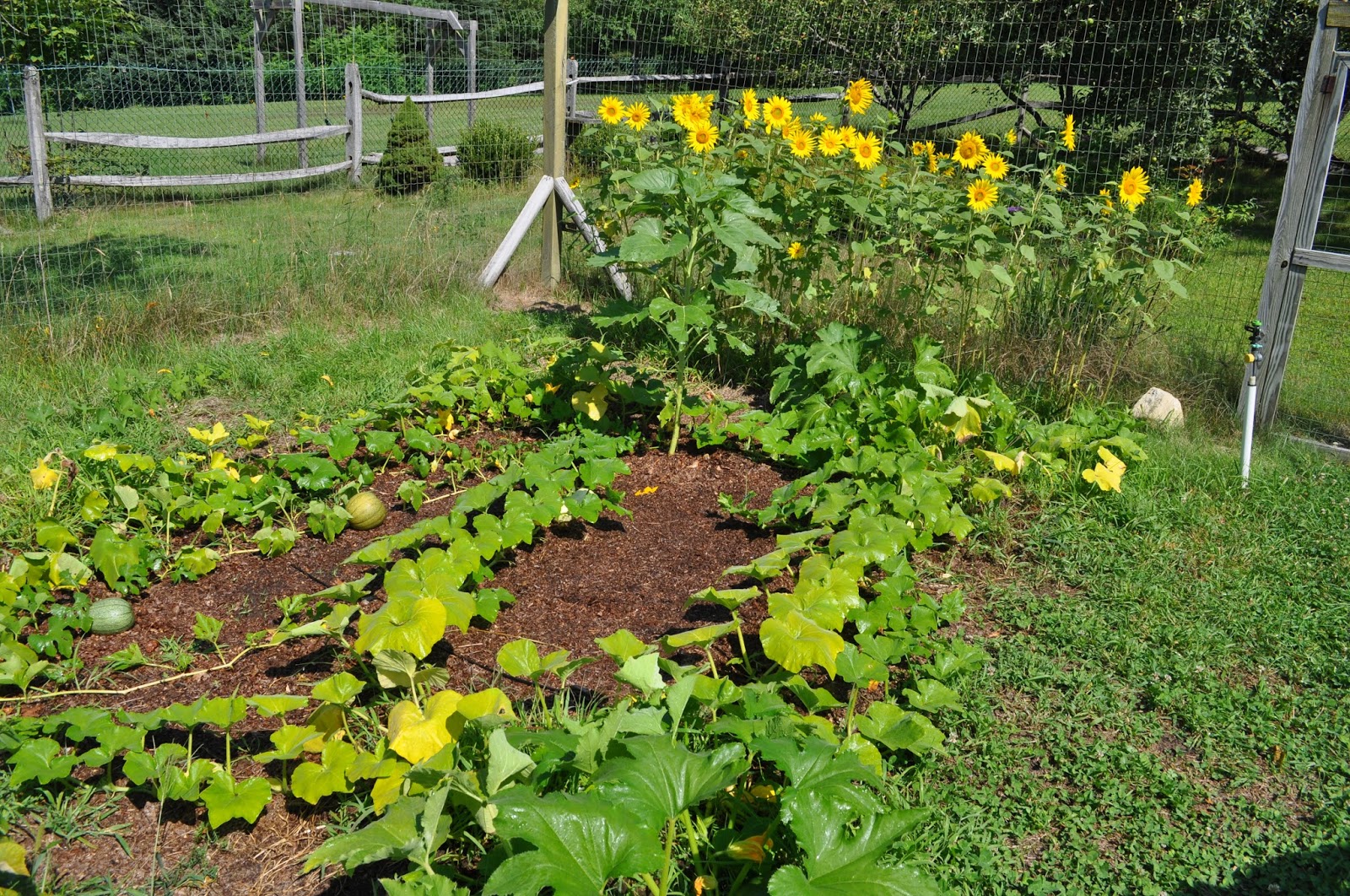 Finally, the crowning glory of this week's harvest. Our first 'Minnesota Midget' muskmellon! 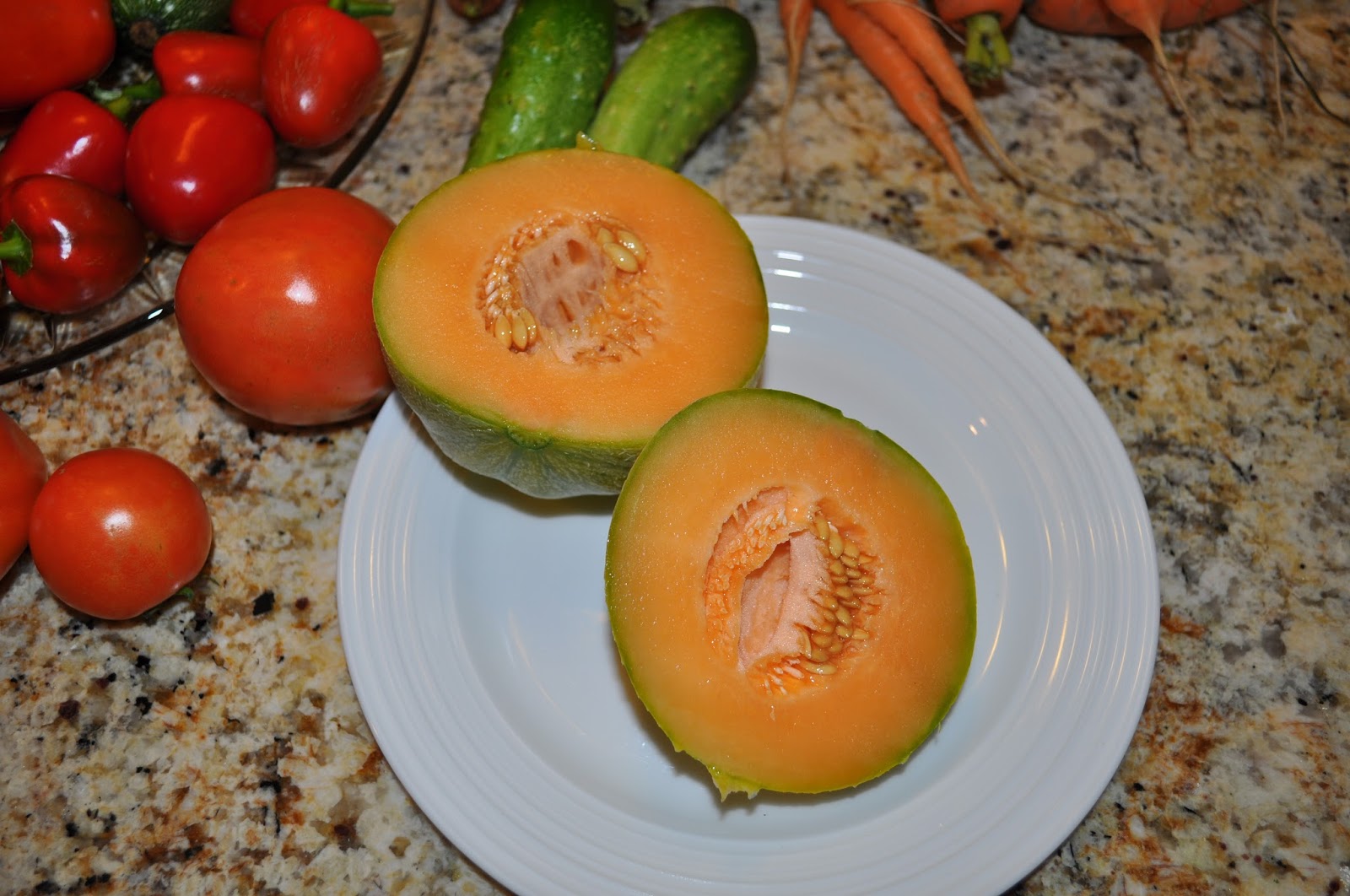 It was fully ripe, juicy, and luscious. Nothing like it!
Thanks for reading, and here's to full harvest baskets!
Posted by Eight Gate Farm NH