Welcome to another Harvest Monday, as always hosted by Daphne's Dandelions.

Looking up the field on a golden Sunday morning: 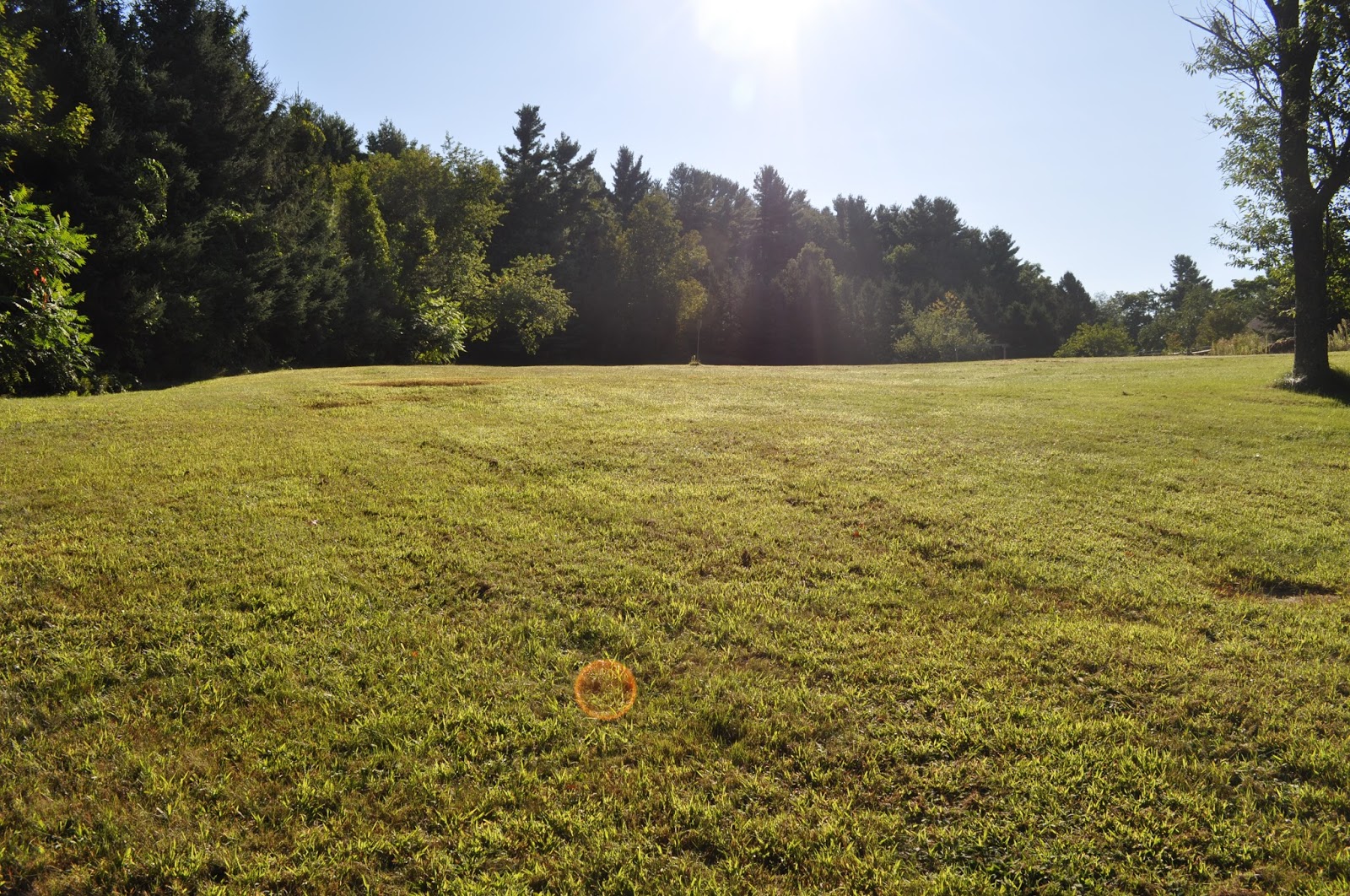 I've been saying this is the nicest September we've ever had in August. Our last rain was August 10, which is very unusual. It's not a problem in the main garden, as I have it all tricked-out with drip irrigation and micro sprinklers on timers, 10 minutes a day. The winter squash has needed some additional hosing.

In our area (Southern New Hampshire, Zone 5b) we have only about 4 or 5 more weeks until the serious chance of frost. It gives one pause! To be more precise, there is a statistical 10% chance starting September 8, rising to 50% by September 26, and 90% by October 13. But every year is different!

We had a nice mid-week harvest: 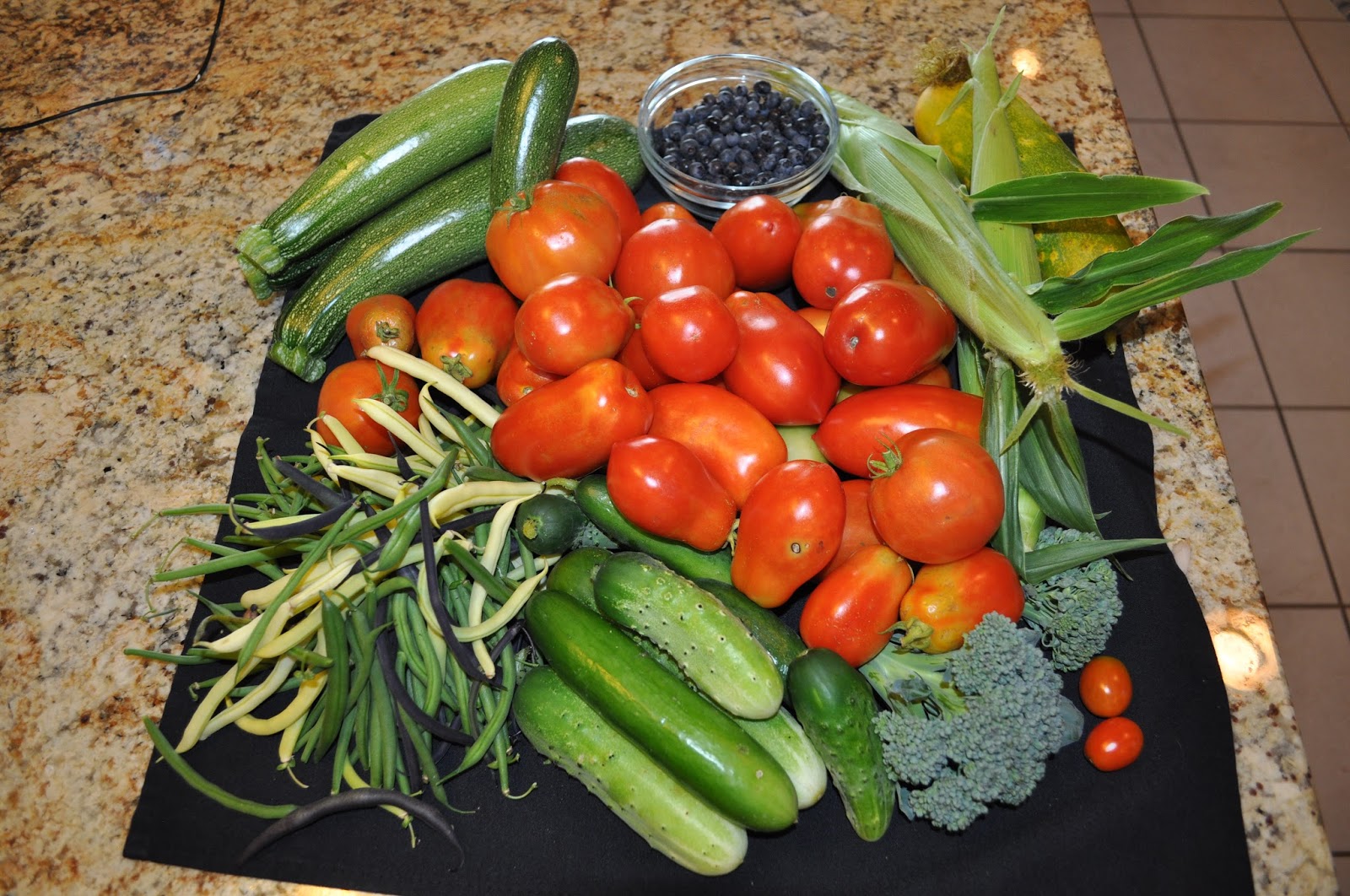 The weekend harvest was about the same. We picked 5 zucchini this week; now they seem to be resting, which is not a problem! There was one more picking of blueberries like you see above. That is it for the year for these wonderful treats. 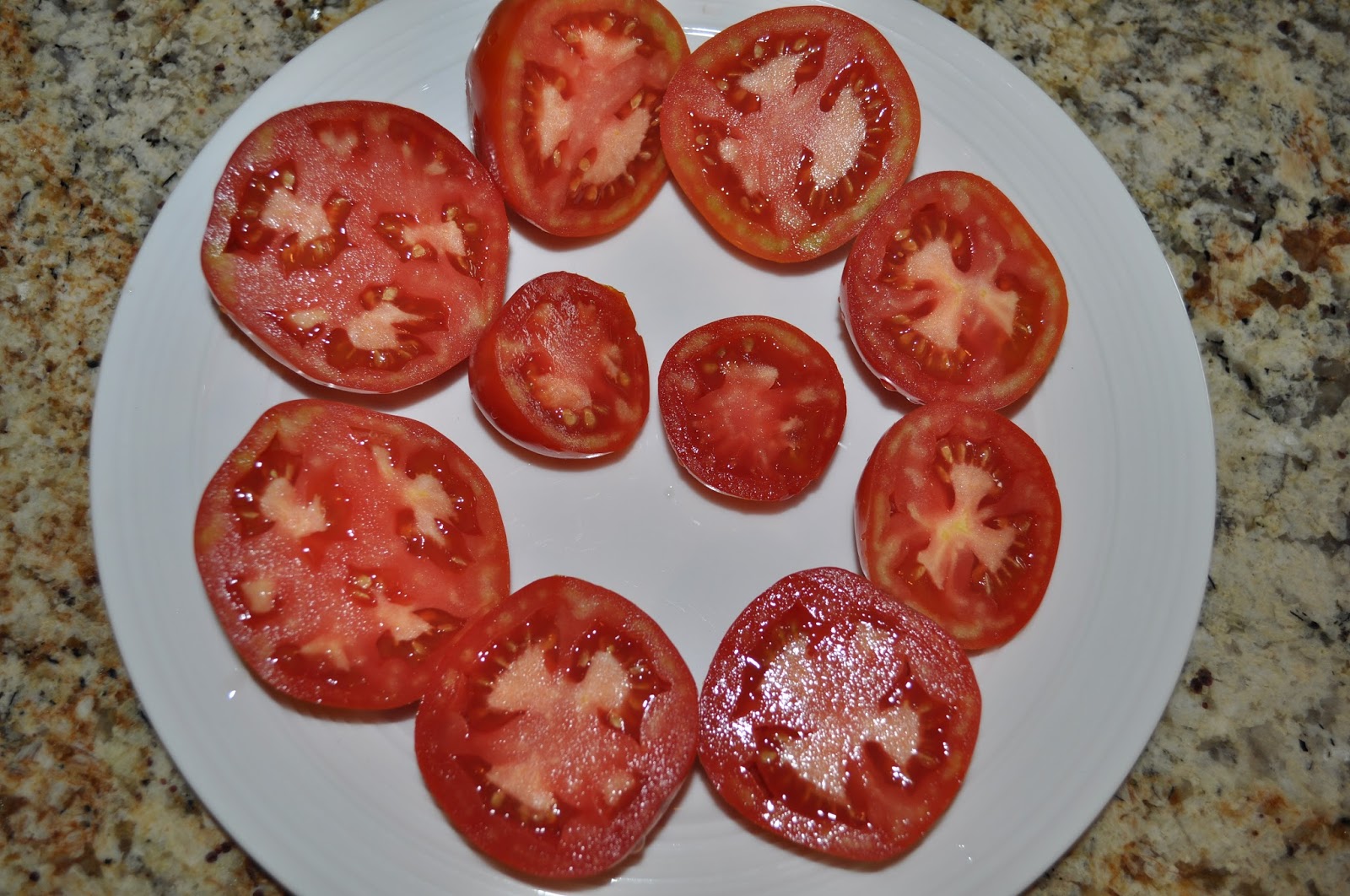 We don't really grow many slicin' tomatoes, but we do like 'em. This particular variety is "Rutgers," and was developed by that university and Campbell's Soup in the 1920s. Last year I bought a plant labelled as such from Home Depot (I know, I know) and grew it in a pot next to the Kitchen Herb Garden, not really expecting anything. But we were blown away by its rich taste. So I saved some seeds, figuring it was far enough away from the real tomato patch that there was no cross-pollination (if that's a problem in tomatoes). I had my doubts, but the seeds germinated fully in the 5 pots I reserved for them. The guy at Fedco says the determinate version of Rutgers, the one we have, is not quite as good as the original indeterminate. If so I would like to taste some, because ours are fabulous.

They are not typically very large in our experience. The biggest one in the above photo is about 5 oz (142g.). We did pick (and put on our Sunday morning bagels!) a much larger one, over 11 oz. (312 g.). I'm saving the seeds from this one...who knows, maybe I have my own variety!

Question: do you love or hate the way tomato plants smell? Me, I love it; The Kitchen Goddess, not so much. 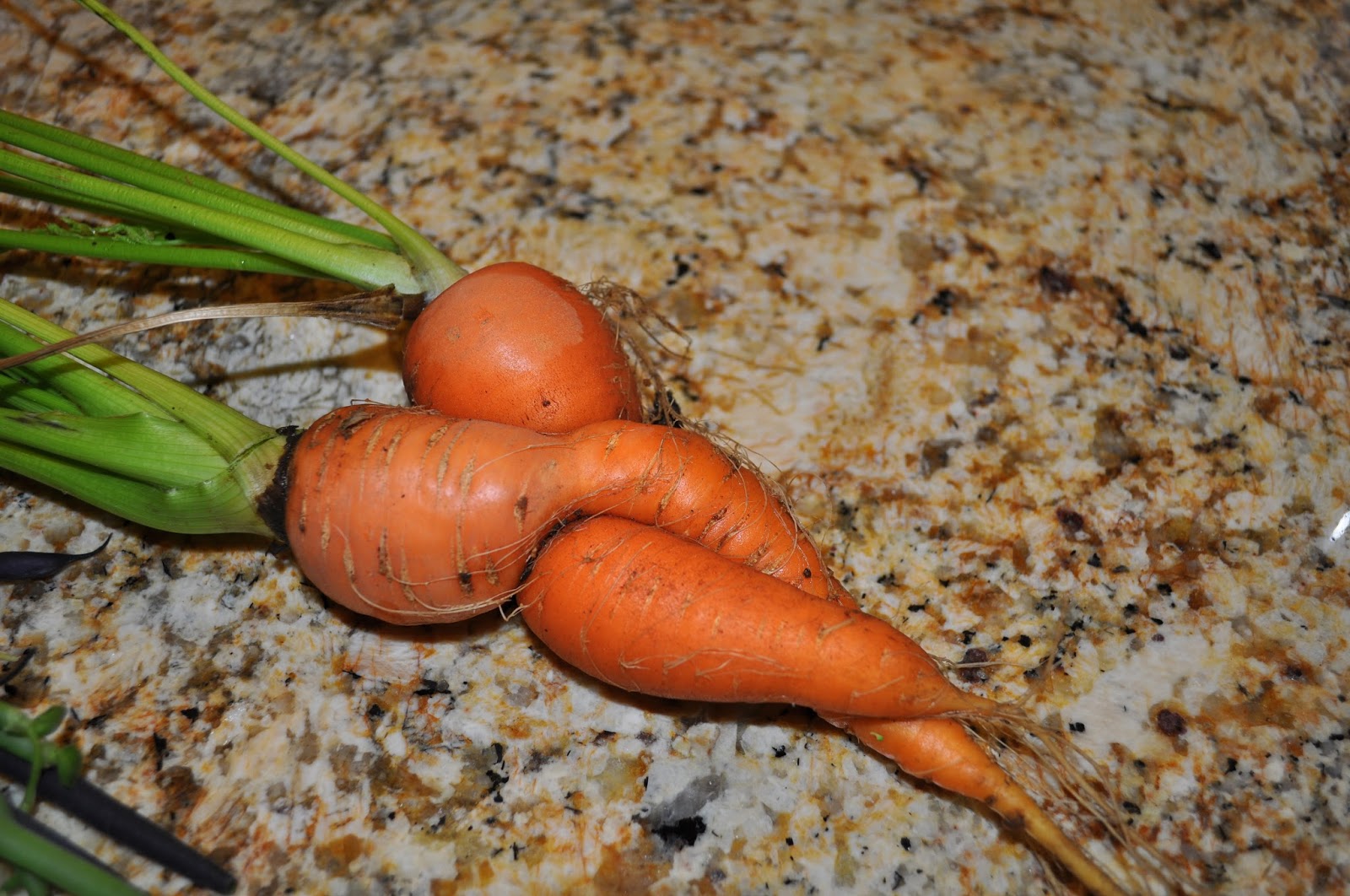 I can't show you Freaky Carrot First Prize, because it's R-rated and this is a family-friendly blog, at least for now. But I can show you a big'un. Almost 10 oz. (281 g.): 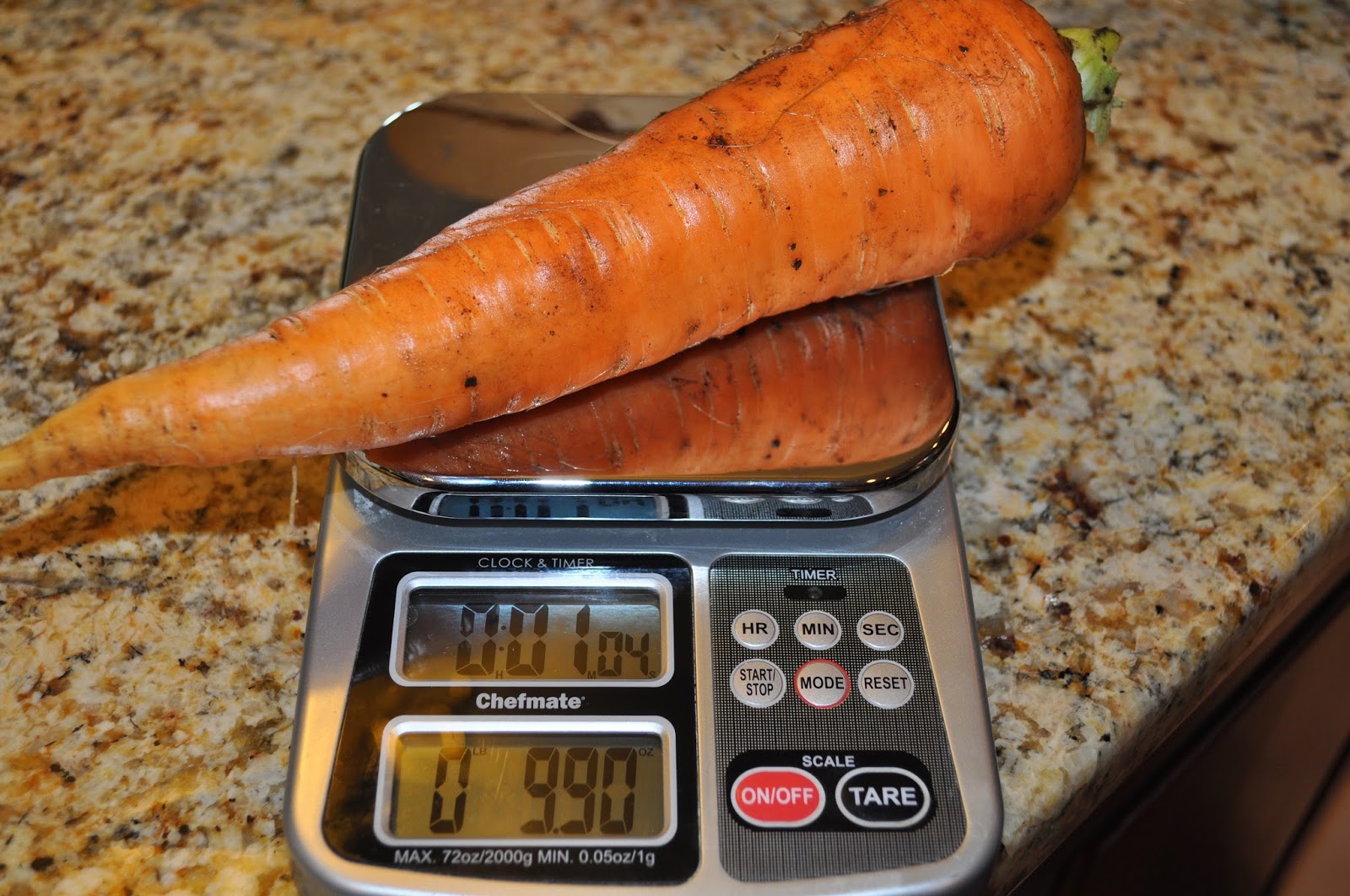 Something different for the harvest basket: Chinese Cabbage! 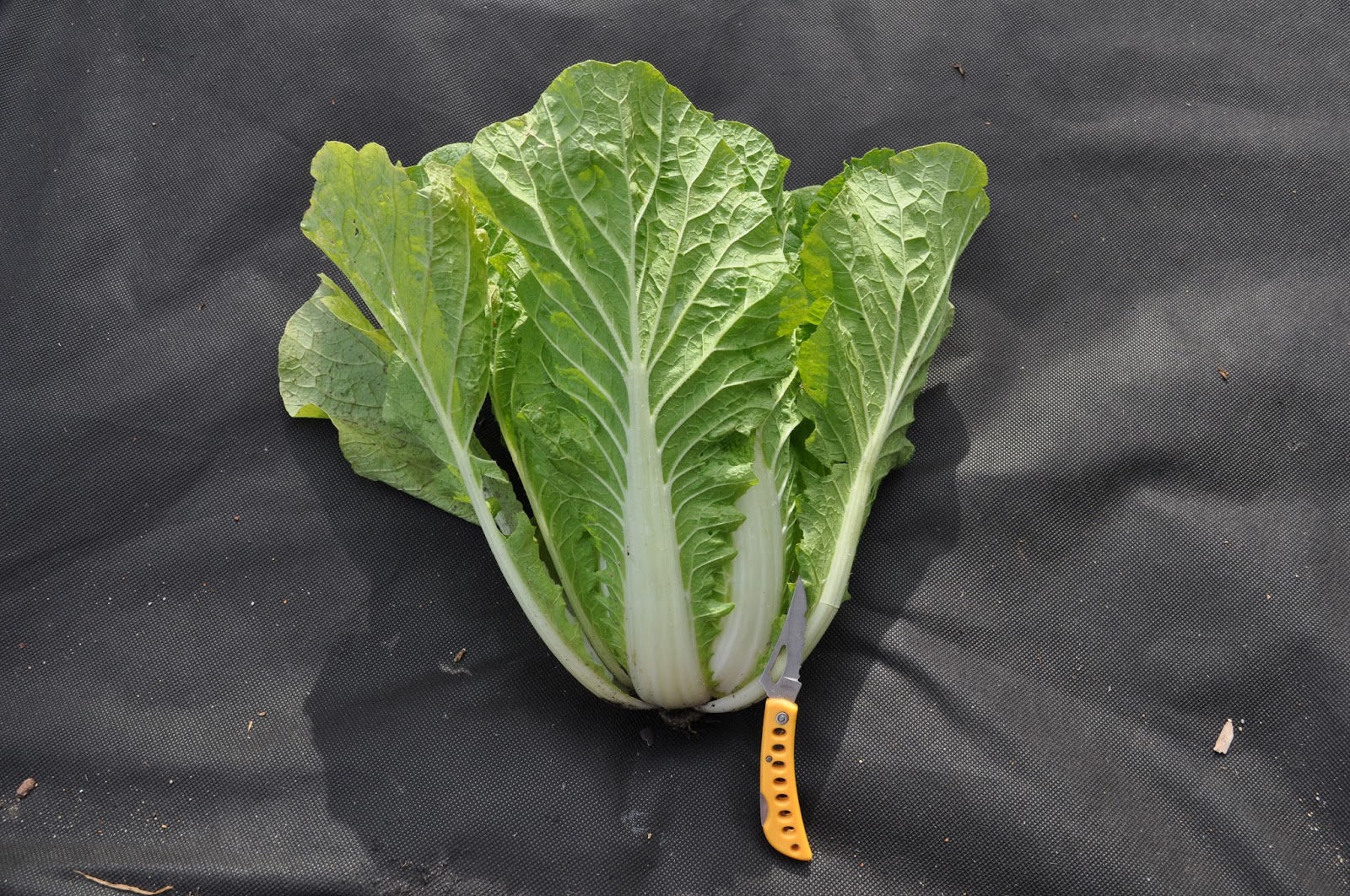 The variety is "Soloist (F1)," which I got from Territorial. This is the first of 4 plants I set out on July 4. It doesn't get too big; this is just 1lb. 5oz. (~600g). I also had a spring planting of 4 plants. Root maggots really did a number on them then, so I had to harvest what I could all at once, on June 8. Putting them out in the summer seems to have avoided that problem, so now I know. The question is, what to do with all that cabbage! In the Spring, The Kitchen Goddess, following Daphne's lead, made pot stickers, a lot going to the freezer. But that really doesn't use all that much. Stuffed cabbage was also made, but that didn't use it up either. Now we have more! I guess I won't plant more than one or two plants next year, and not in the spring. They do look nice in the garden. 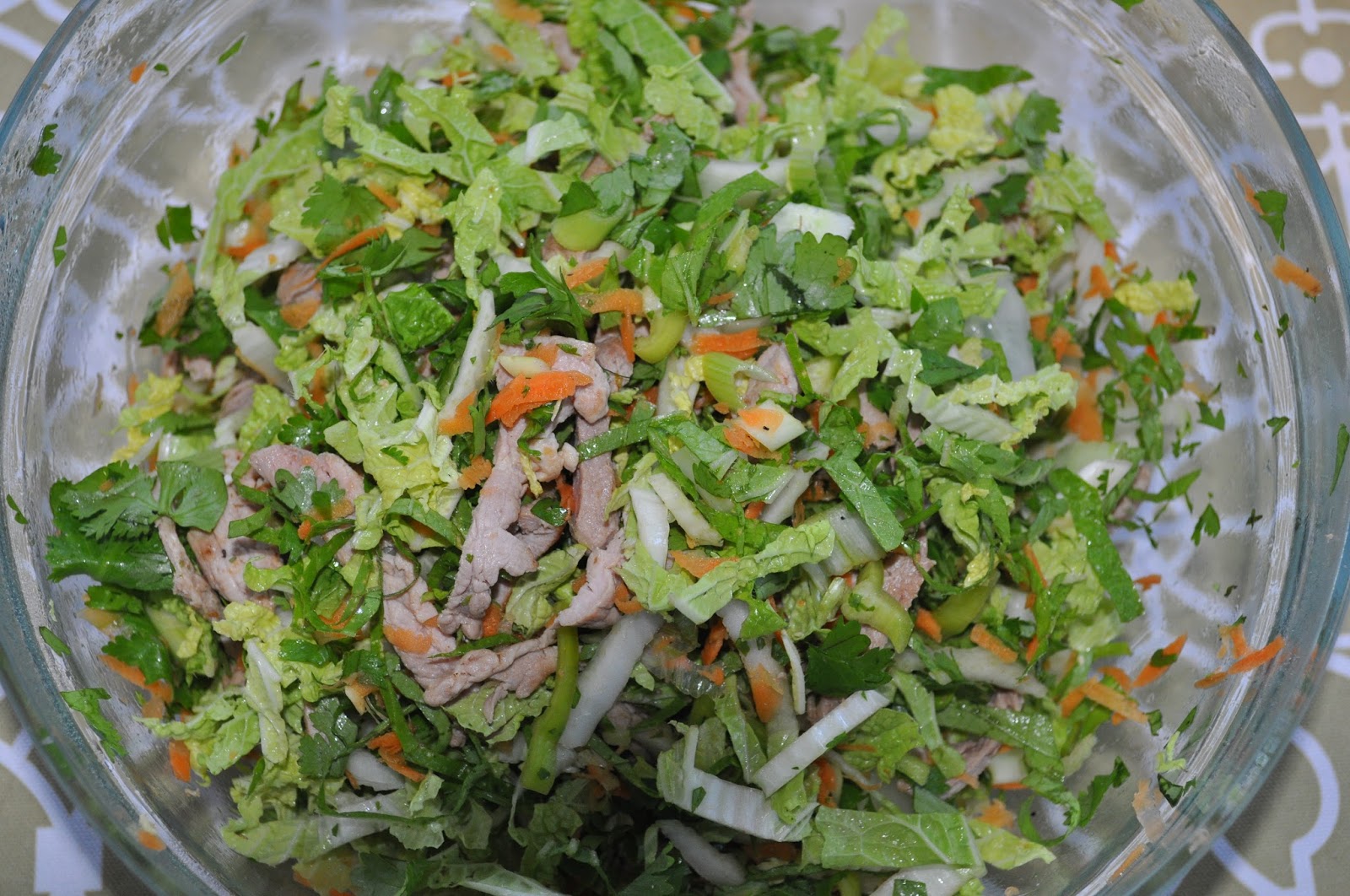 
Most of the other ingrediants came from the garden: cucumber, carrot, spicy pepper. But not the cilantro; I just can't seem to grow it and not have it bolt almost instantly. And of course not the ginger or pork. 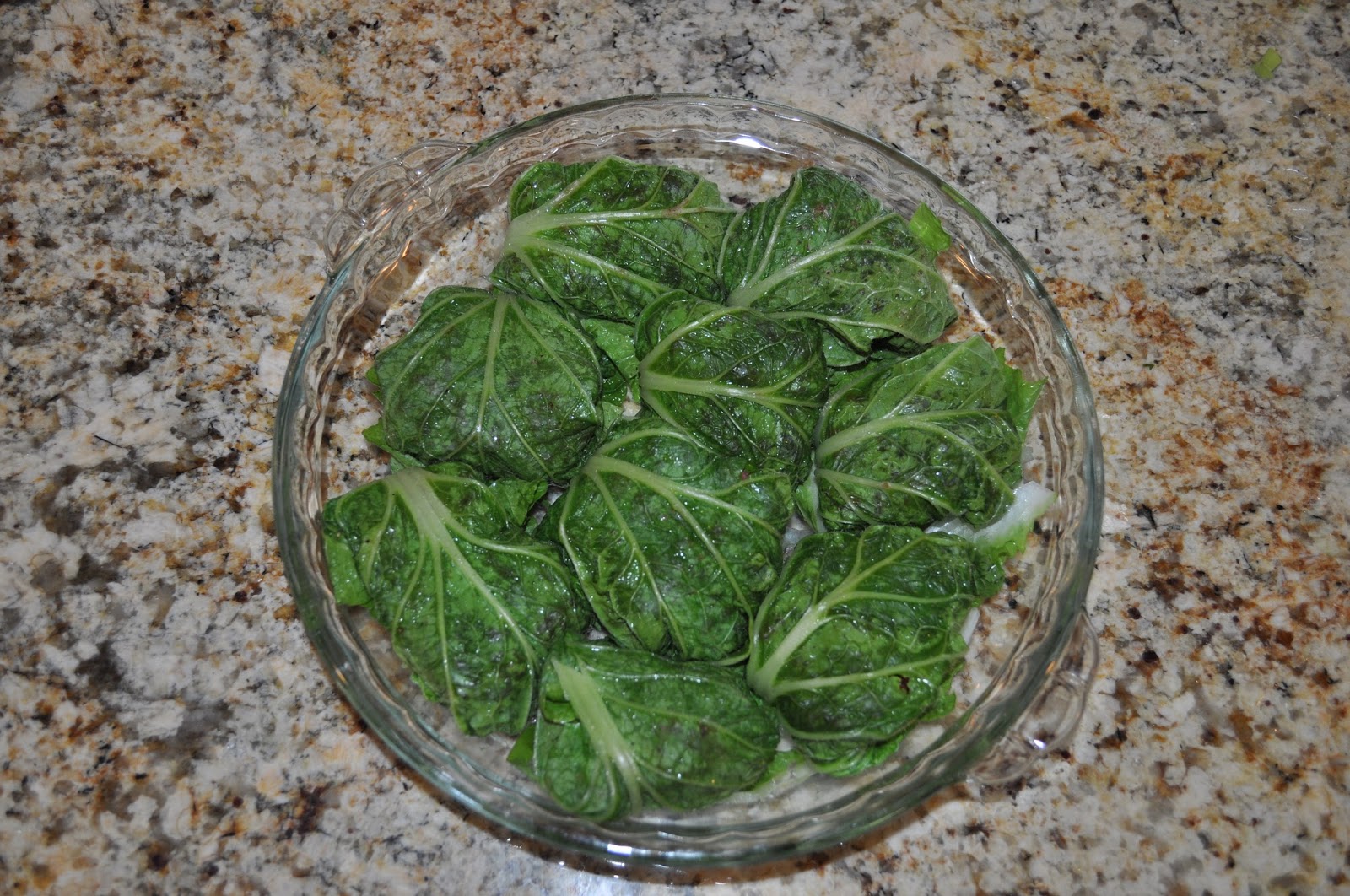 The Kitchen Goddess used the rest for Chinese Sausage-stuffed Cabbage:

Served over rice, it was delicious! But something strange...raw, the cabbage is very tender. Once cooked, it gets a little tough.


Another new addition to the harvest basket: eggplant! 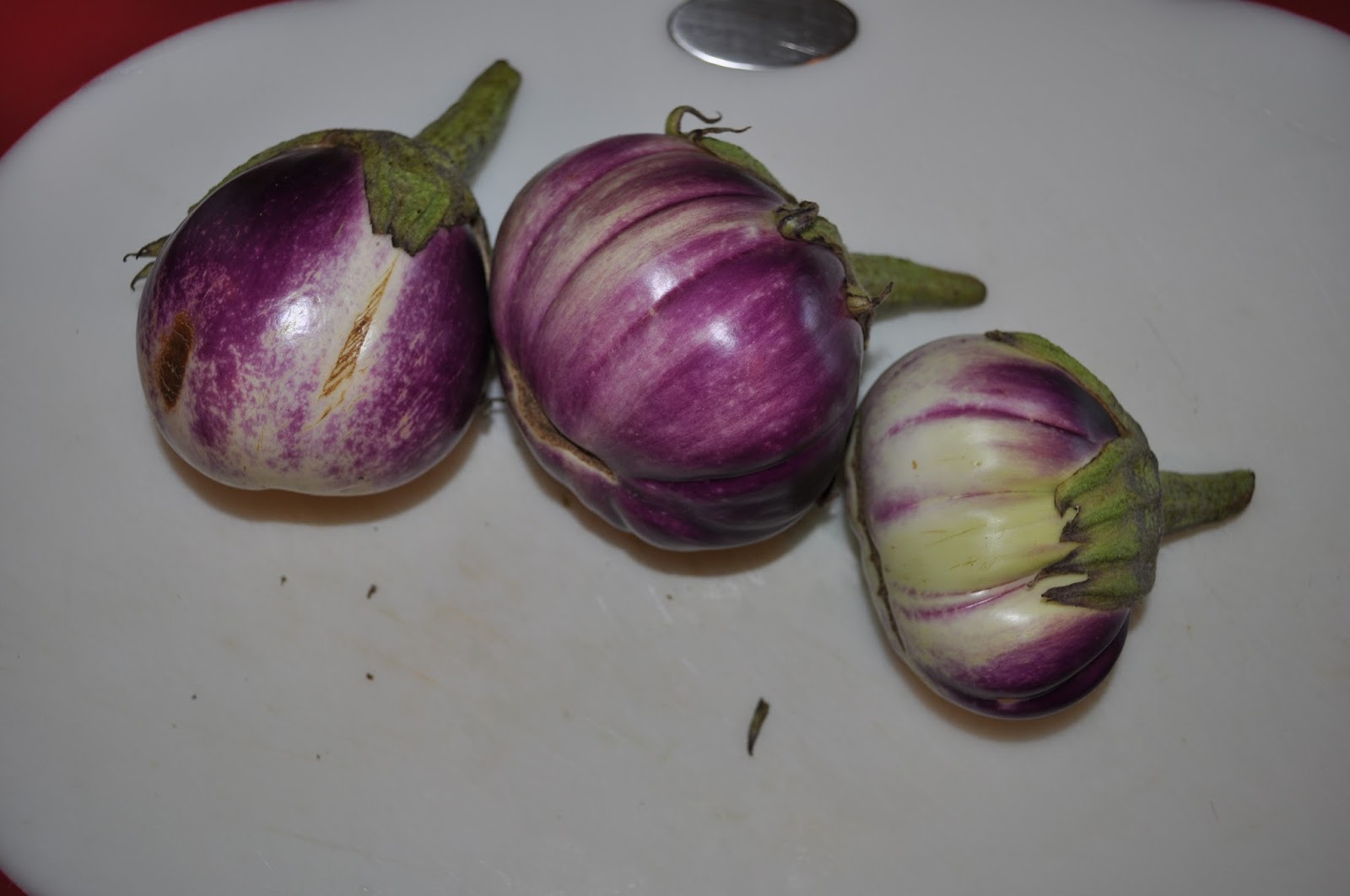 This variety is "Rosa Bianca." We've been watching it for a few weeks waiting for it to get bigger (these are about baseball size). I went back to the catalog (Territorial) and saw the ones illustrated looked about this size. They are very pretty, but I like eggplant to get bigger and more productive. 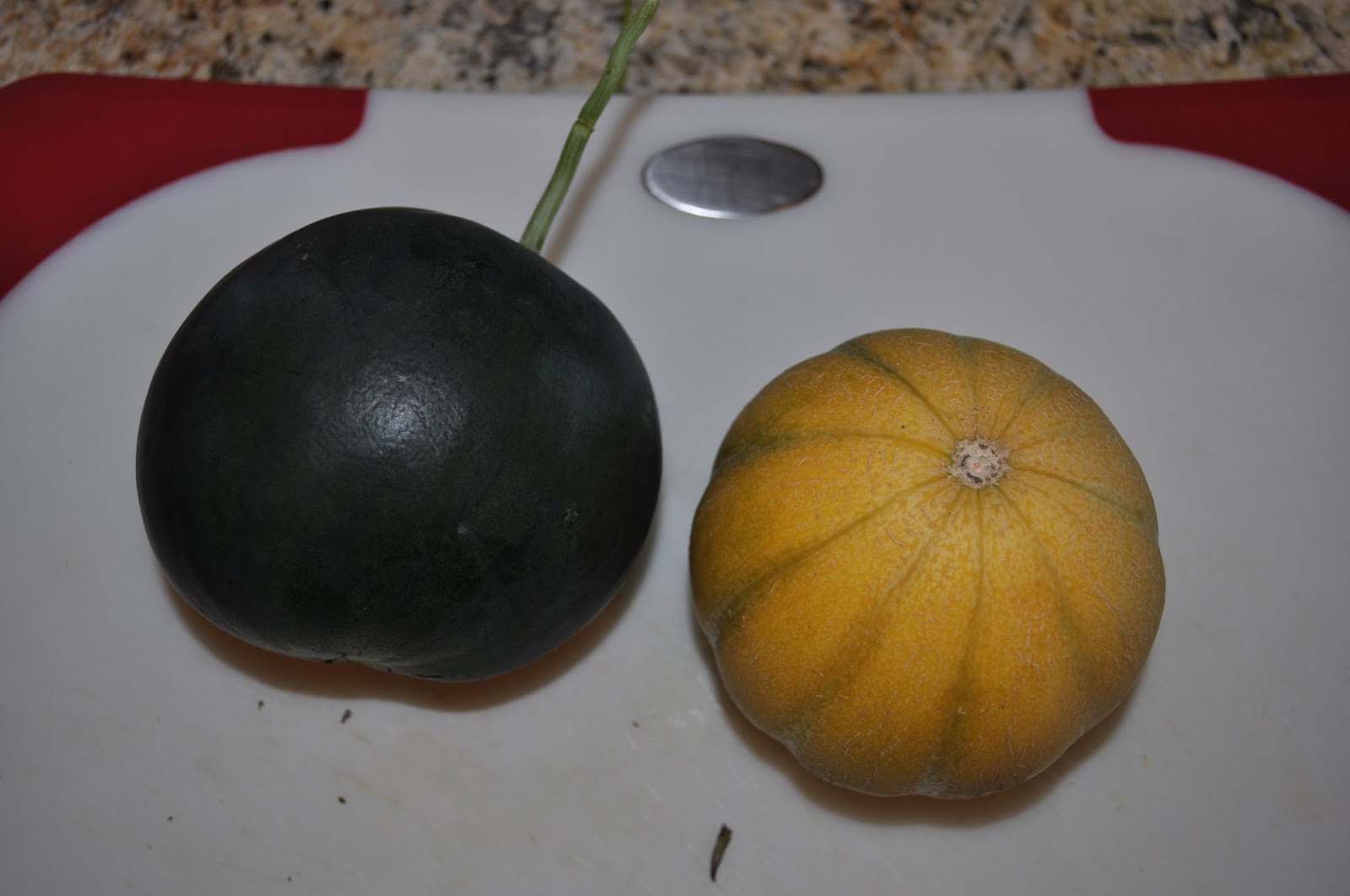 They aren't kidding about "Baby"...this was only about 1 1/2 pounds (680 g.). And unfortunately, it seems it was picked too early, even though the stem was withered. Not unpleasant tasting, though; kind of like honeydew. How can you tell if they are really ripe?


We have two small Anjou pear trees. Whoever planted them sited them wrong...they are shaded much of the day. Since last week all the fruit disappeared from one tree...we have infiltrators! Maybe there aren't enough gates at Eight Gate Farm! To protect the crop, I picked all of them from the second tree. I got 26: 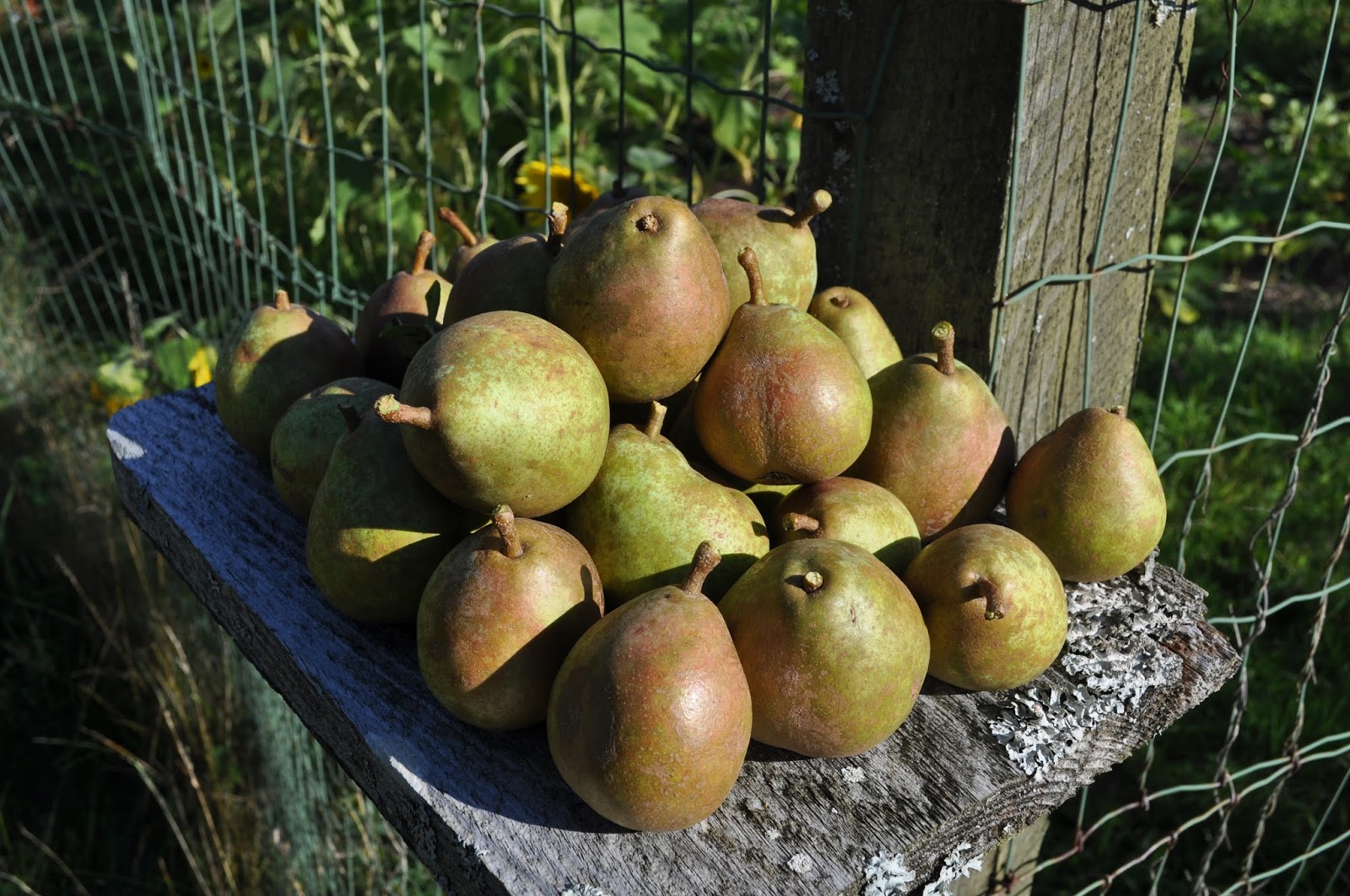 They aren't really ripe yet...still very hard. They did pop off the tree very easily. The best advice I read about when to know when to pick pears said: wait until you see them advertised at a local farm stand. But I could not take the chance. Apparently, though, they will not ripen on the tree anyway.
Of course we are still picking beets, beans, broccoli, cucumber, and chard. The house freezer has reached capacity, so we moved all this year's frozen produce to the barn freezer; two bushels full! 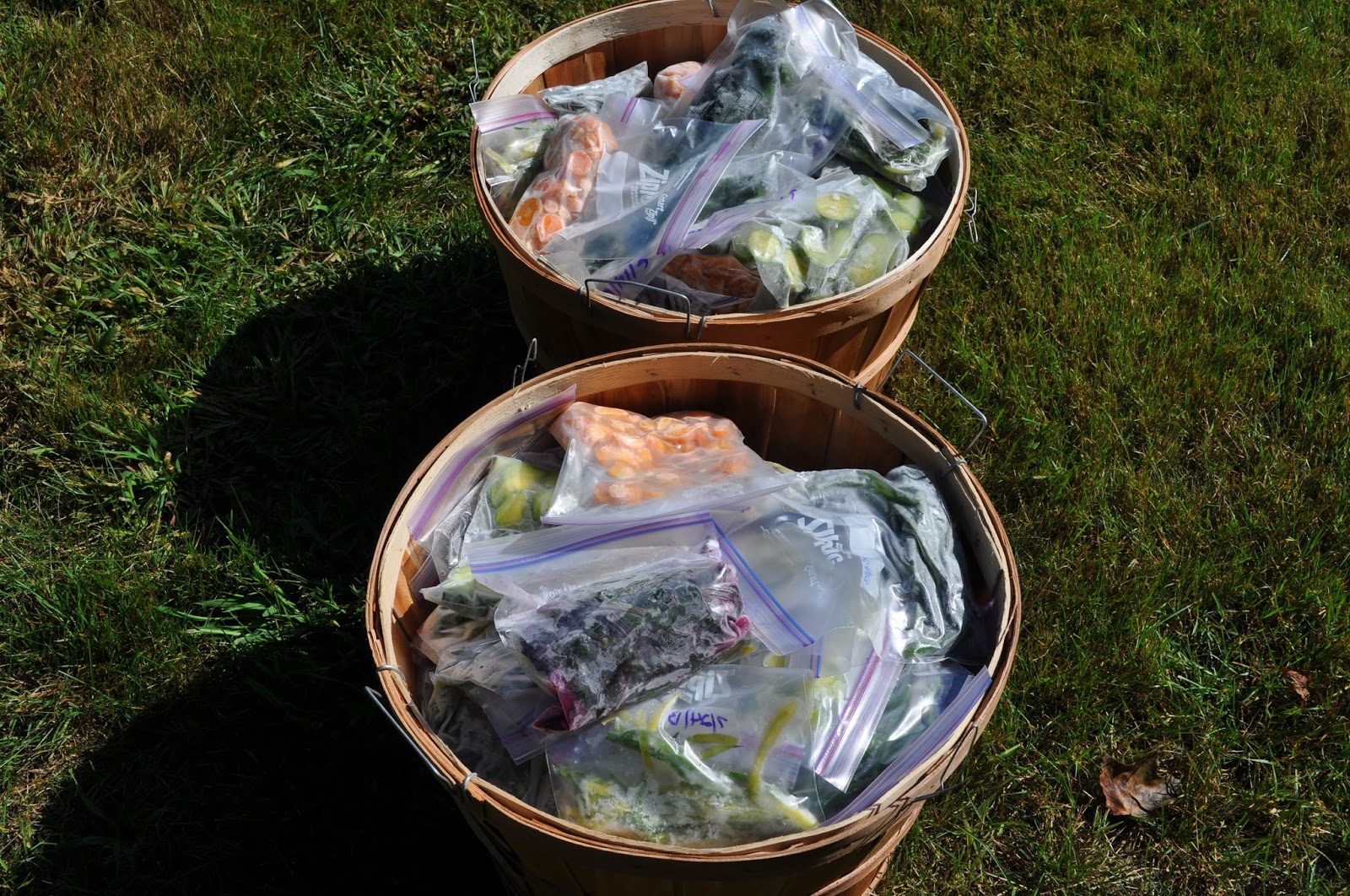 I close with a picture of a Butterfly Bush blossom (the butterflies were being shy). Get out there and work your garden, no slacking please. 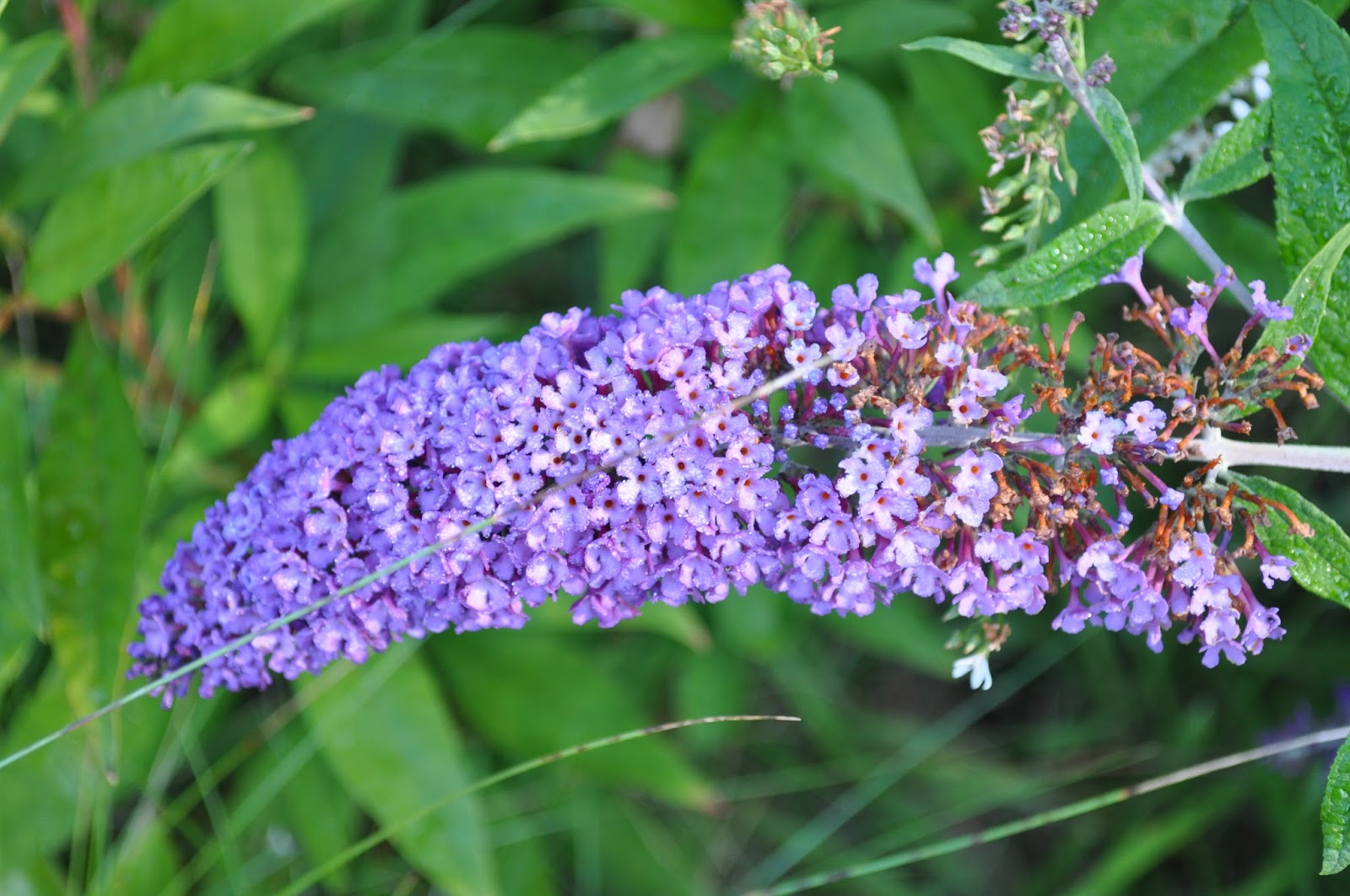