Welcome to another Harvest Monday at Eight Gate Farm. Harvest Monday is graciously hosted by Daphne's Dandelions, so be sure to check out all the posts there from around the world!

This is turning into the coolest August I can remember, with daytime temps not even hitting 80 F. (26 c.) and nights in the 50s F (12 c.). We had a major rainstorm (like everybody in the East) on Wednesday that knocked over 25 or so of the corn stalks in The Survival Garden, but they were staked back up without too much damage.

We picked the ripest tomatoes before the rain to protect them. 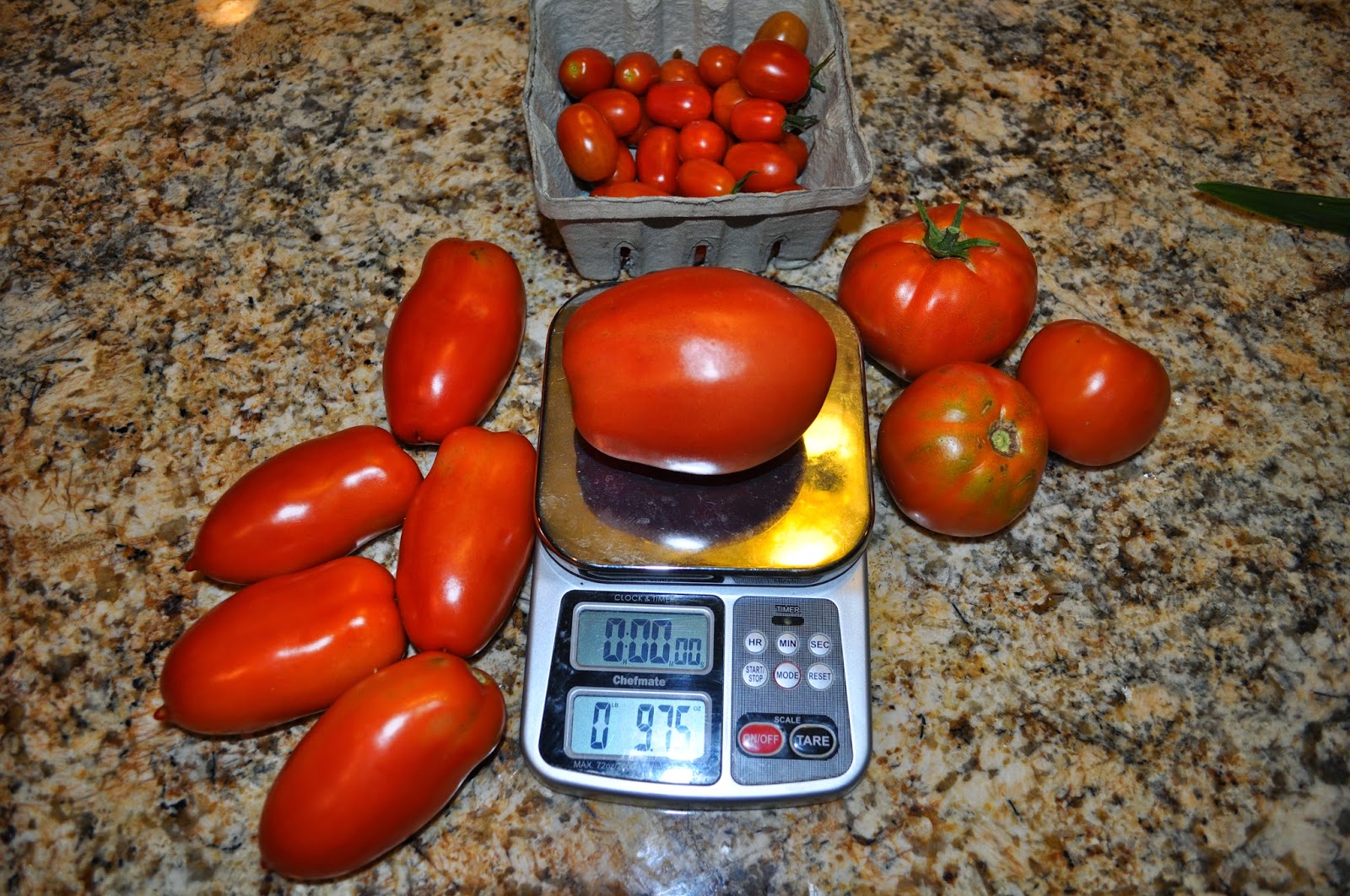 That's Incas on the left, Rutgers on the right, Sugar Plum at the top, and another of those Burpee Supersauce guys on the scale, weighing a nice 9.75 oz. (~276 g.).

We also picked 10.5 oz. (~300 g.) of beans. Note: I like to keep the purple Velour and the green Denver filet beans separate for photography, but The Kitchen Goddess lets them fraternize! 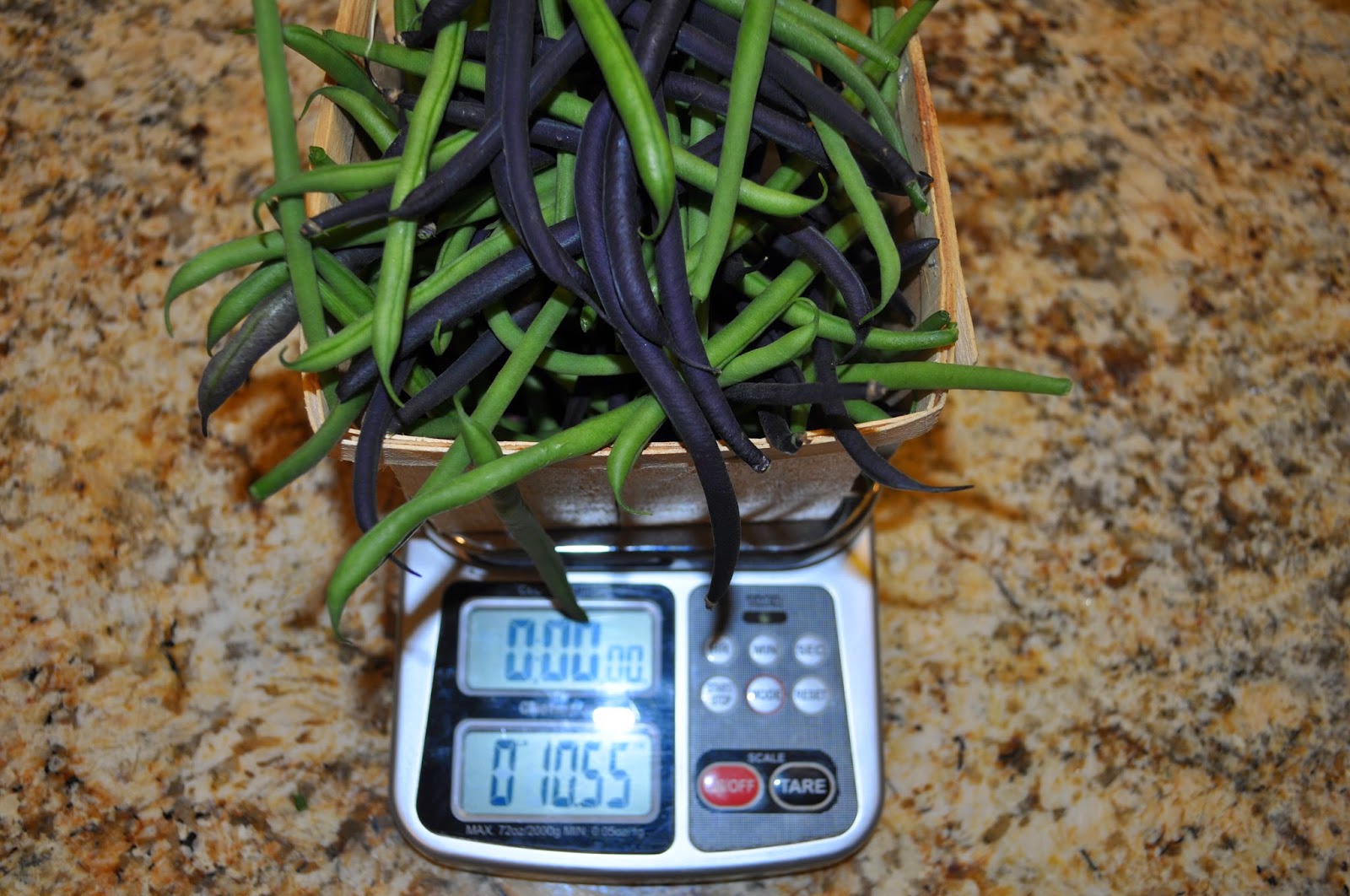 She decided to take some of the sauce tomatoes we were accumulating and make tomato paste. She put the paste in ice-cube trays (remember those?) to freeze them individually. 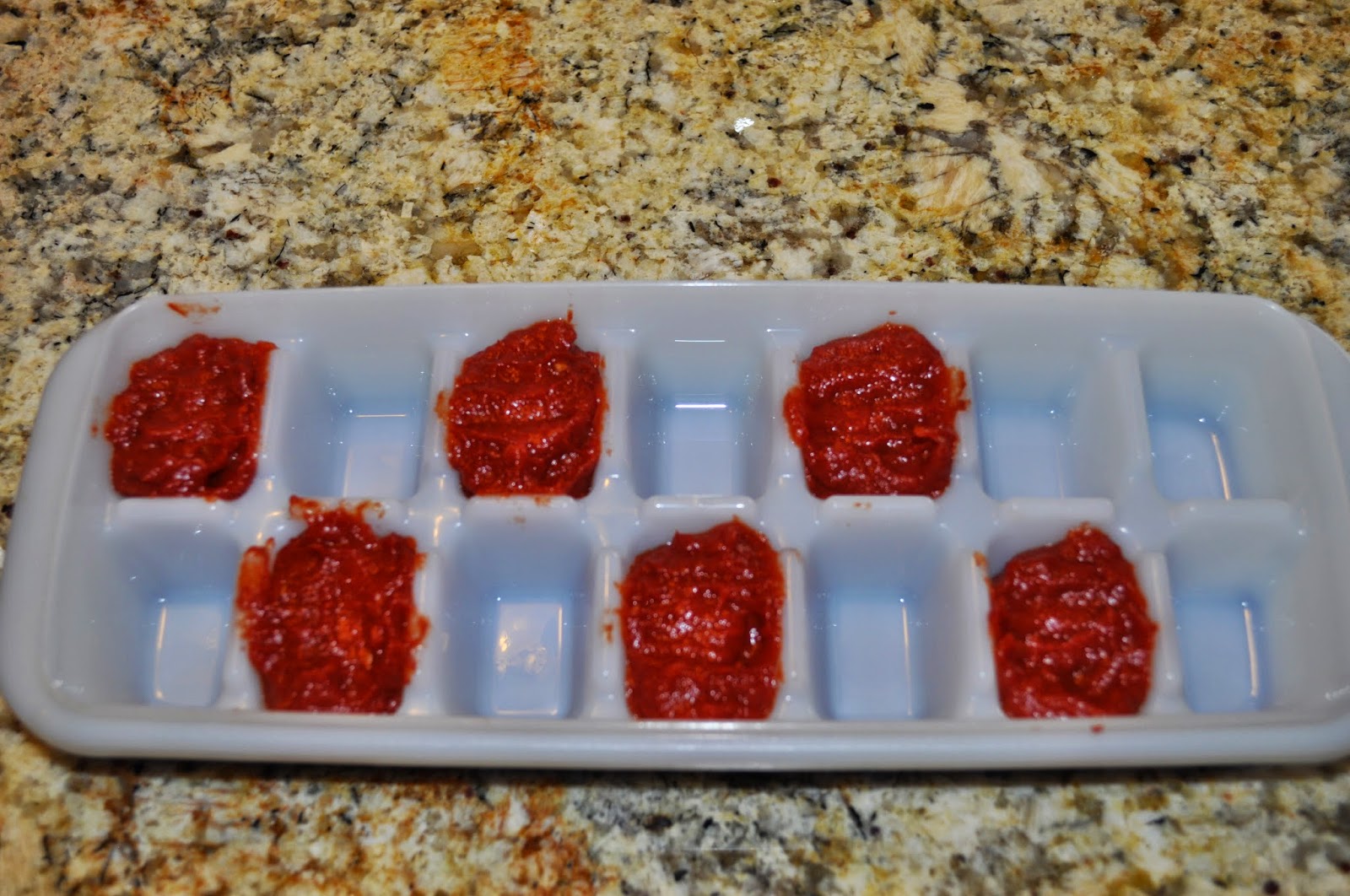 Once frozen, pop them into a bag to store. When you need a small quantity of paste to thicken a sauce, you just take out one or two. I like it! 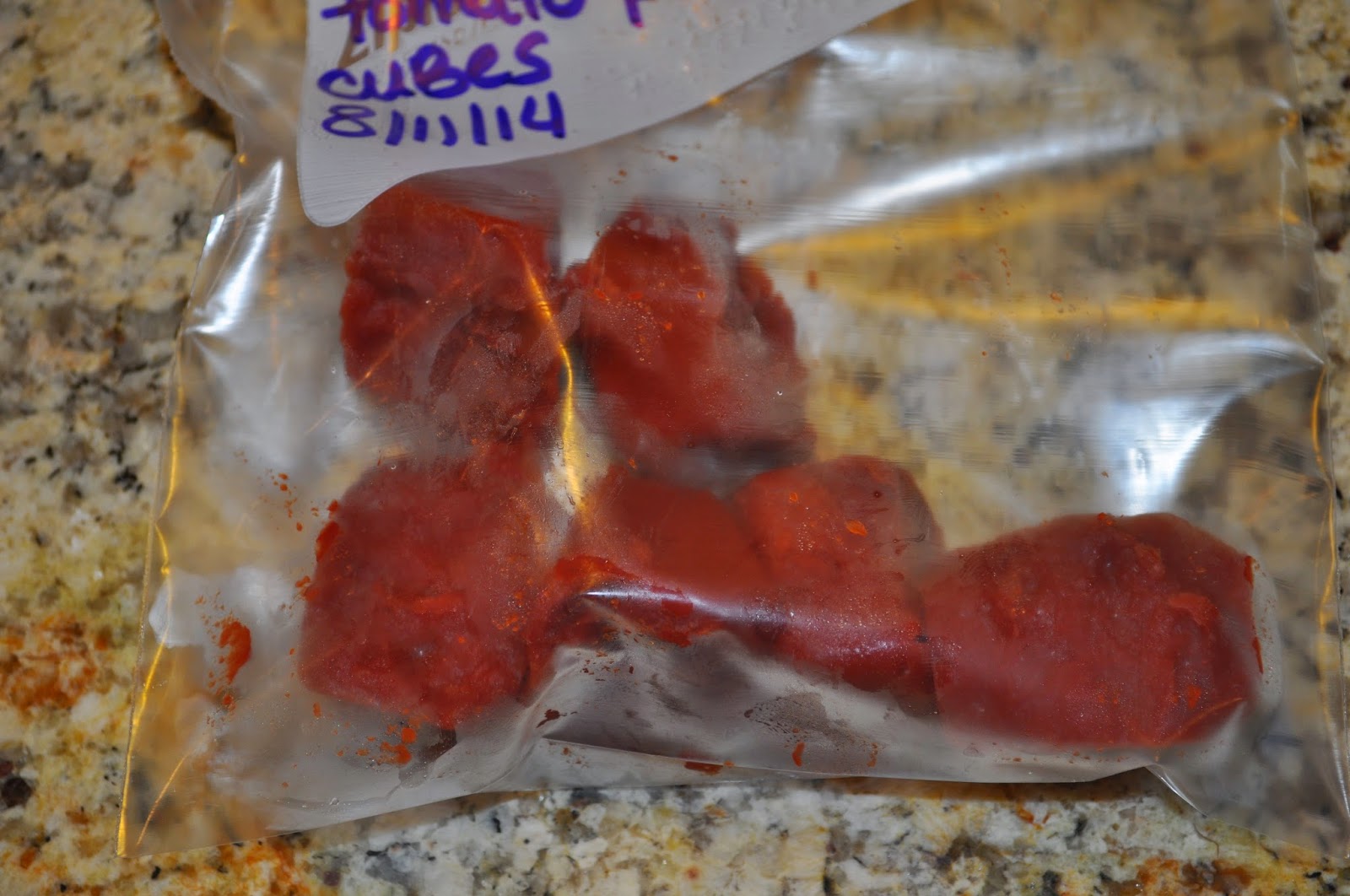 We also got our first real picking of corn. This variety is "Espresso Bi-color" and was supposed to be early, but clearly it was not for us. The plants never really got robust or put out much. The "Honey Select" I planted, not ready yet, looks like it will produce more. Truth be told, sweet corn never seems to do too well for me, which is a shame, since it is one of my favorite foods. 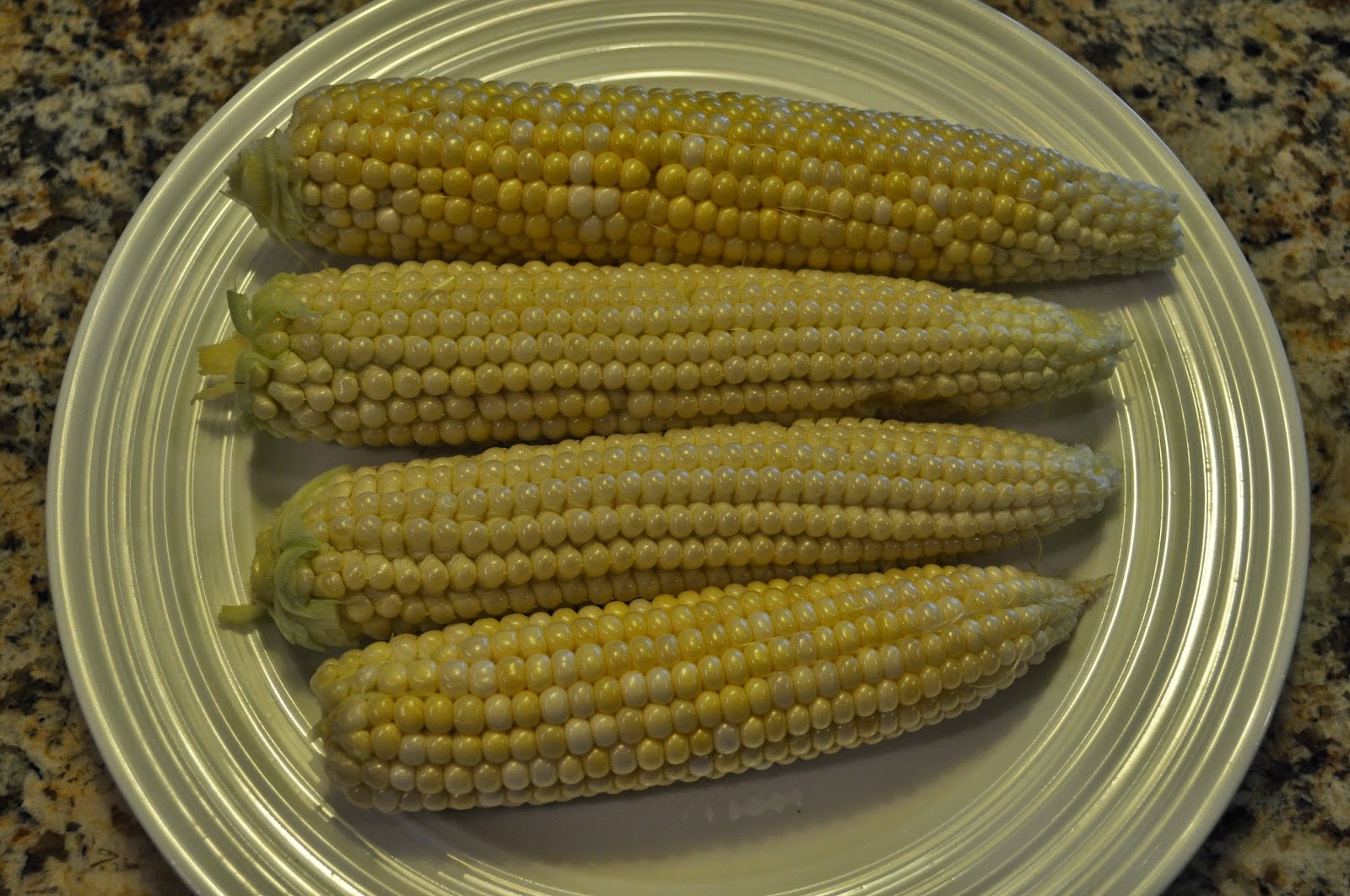 We picked again after the rain. 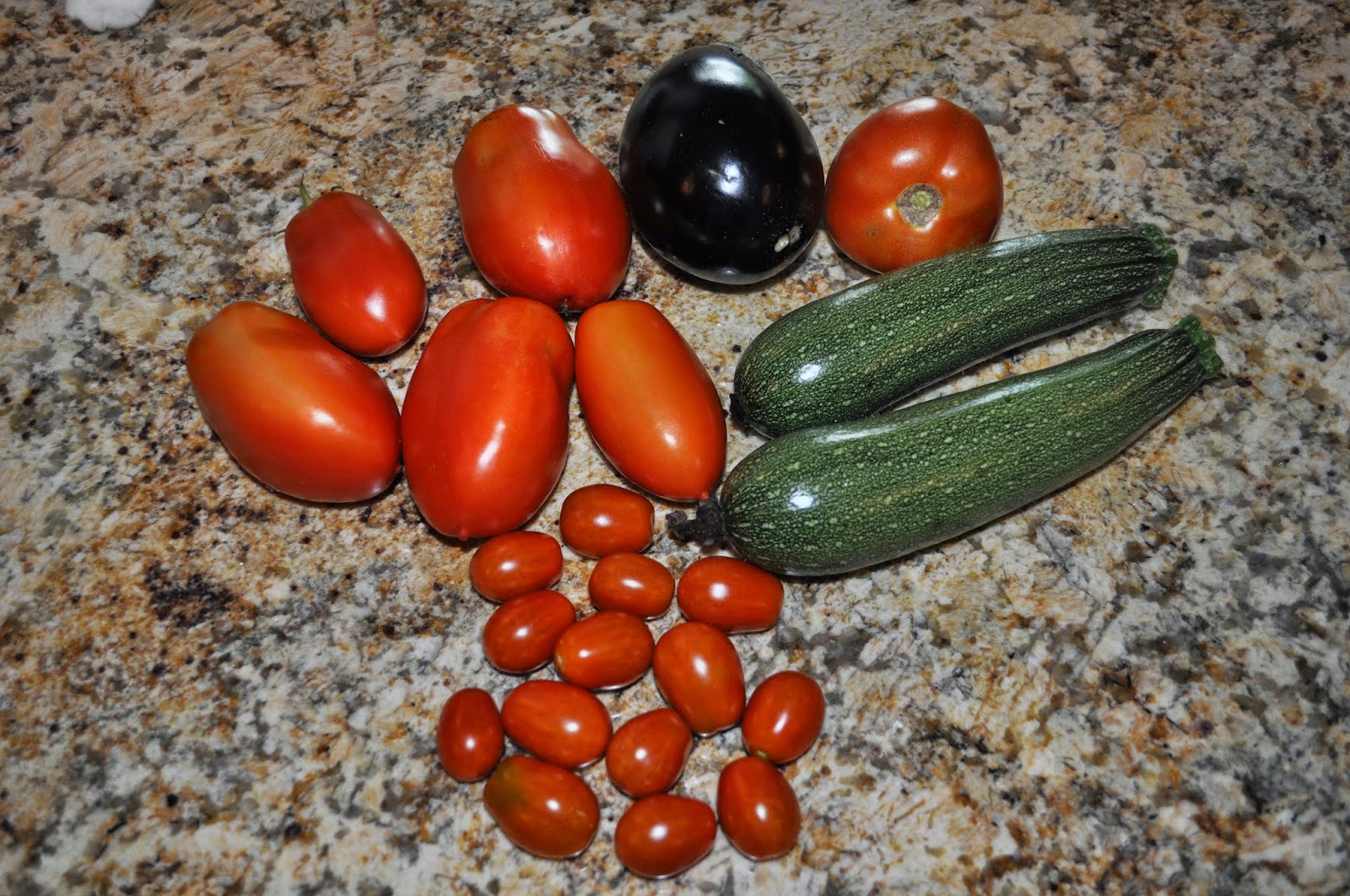 The lone eggplant went right into a meatless Tikka Masala, from a jar but very tasty.
It was time to pick the sumac "candles." This small tree is very common in the Northeast. It's a native, but can get very invasive. But it gives dour old New England a tropical look. 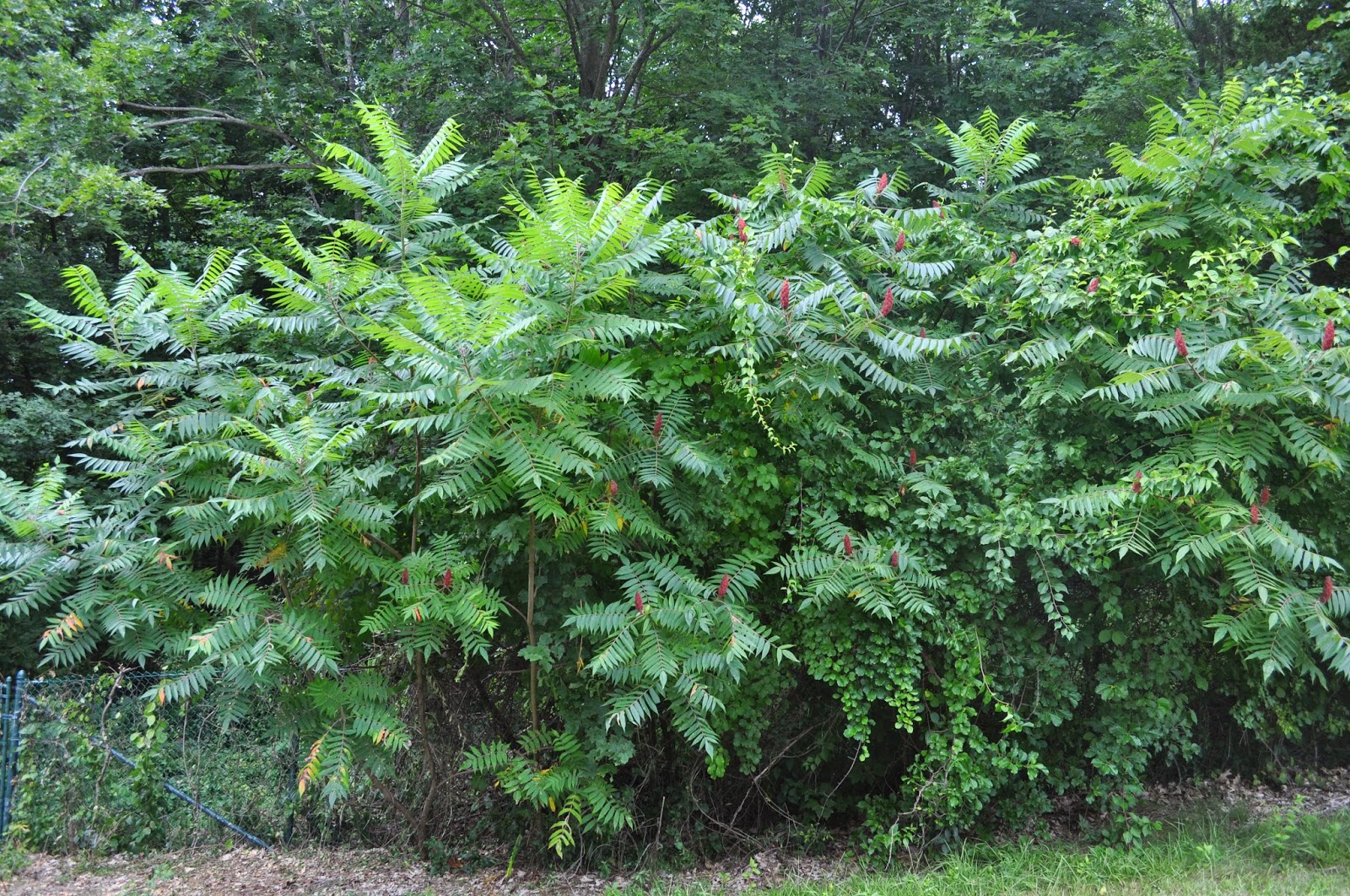 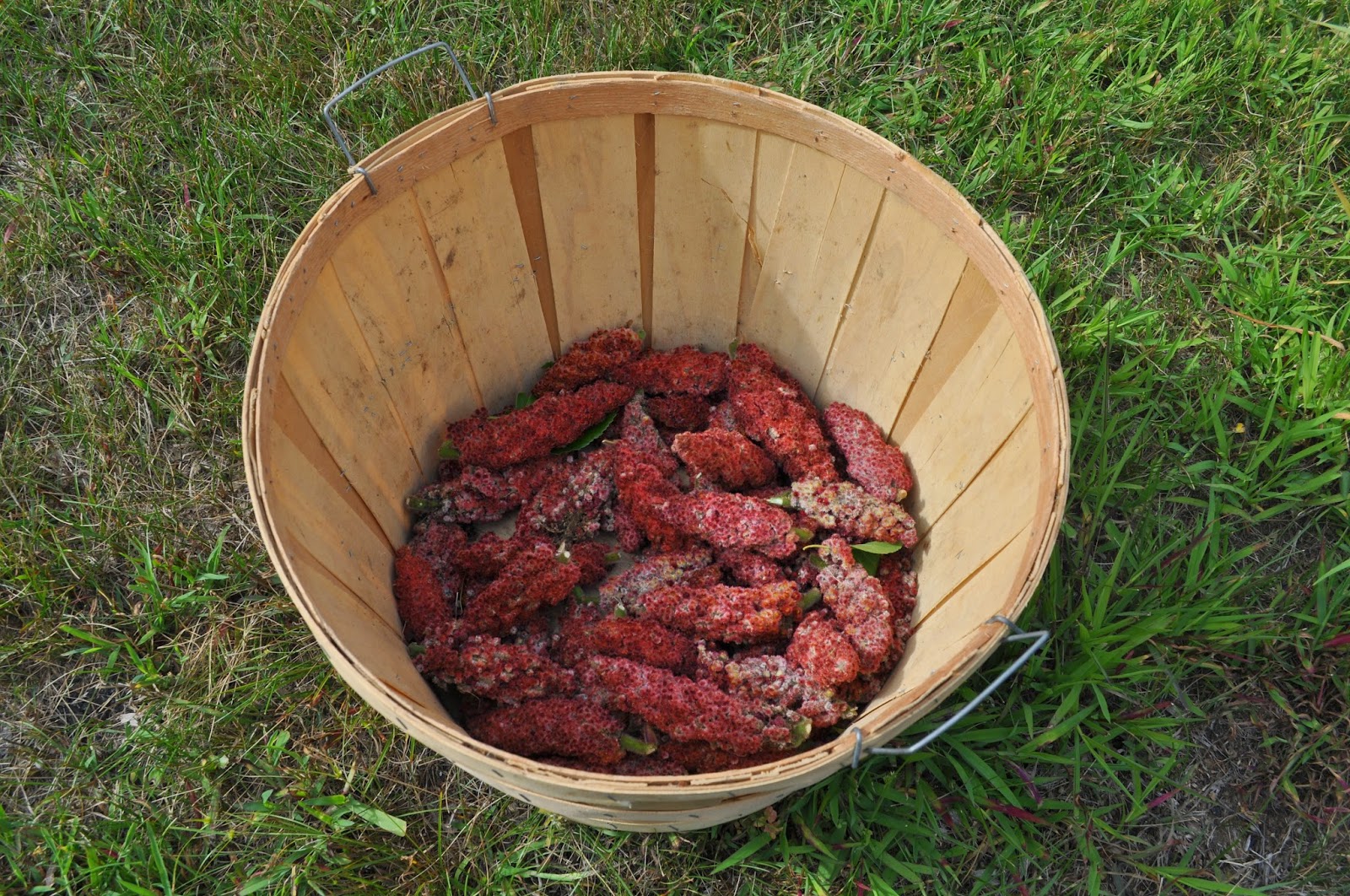 I never did get around to making za'atar with them last year. They all went to making refreshing, slightly lemony iced tea. It helps to add a little black tea to give more flavor.
On Sunday we picked about half our remaining spring-sown beets and carrots (they're slow, I know). This is Golden Touchstone and Detroit Dark Red beets, and Danvers half-long carrots. We got more than 3 pounds (1.36 kg) of beets and almost 7 pounds (3 kg) of carrots (tops removed). TKG was busy processing them while I went for a mountain bike ride! 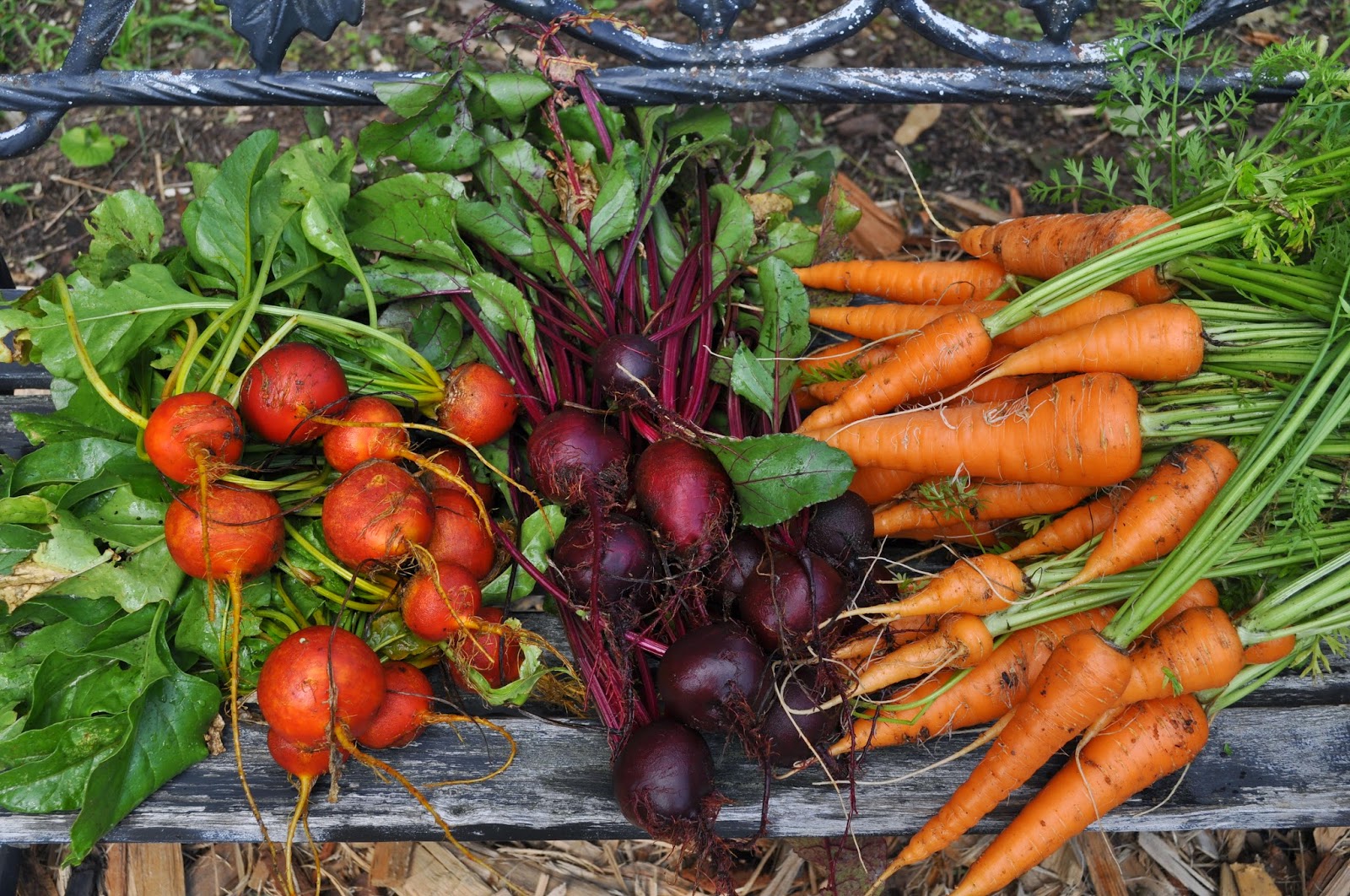 A nice basket of more of the same stuff...but wait! Our first Diva cucumber (first cucumber period). Hoorah! They are just so poky this year. 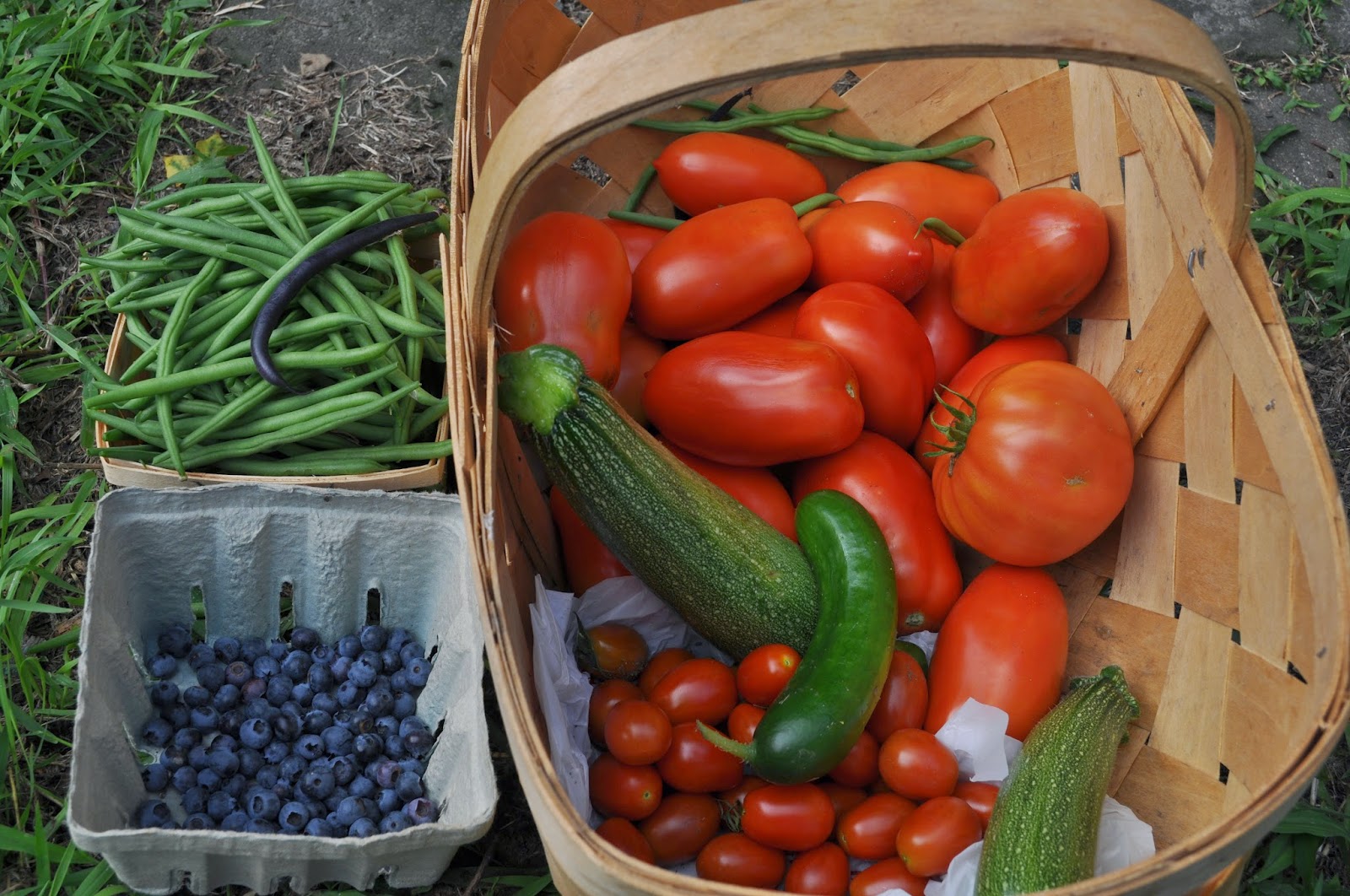 That's the last of the blueberries too. The nets are off, and the birds can have the rest.
Now I'd like to introduce you to the newest member of the Eight Gate Farm workforce! 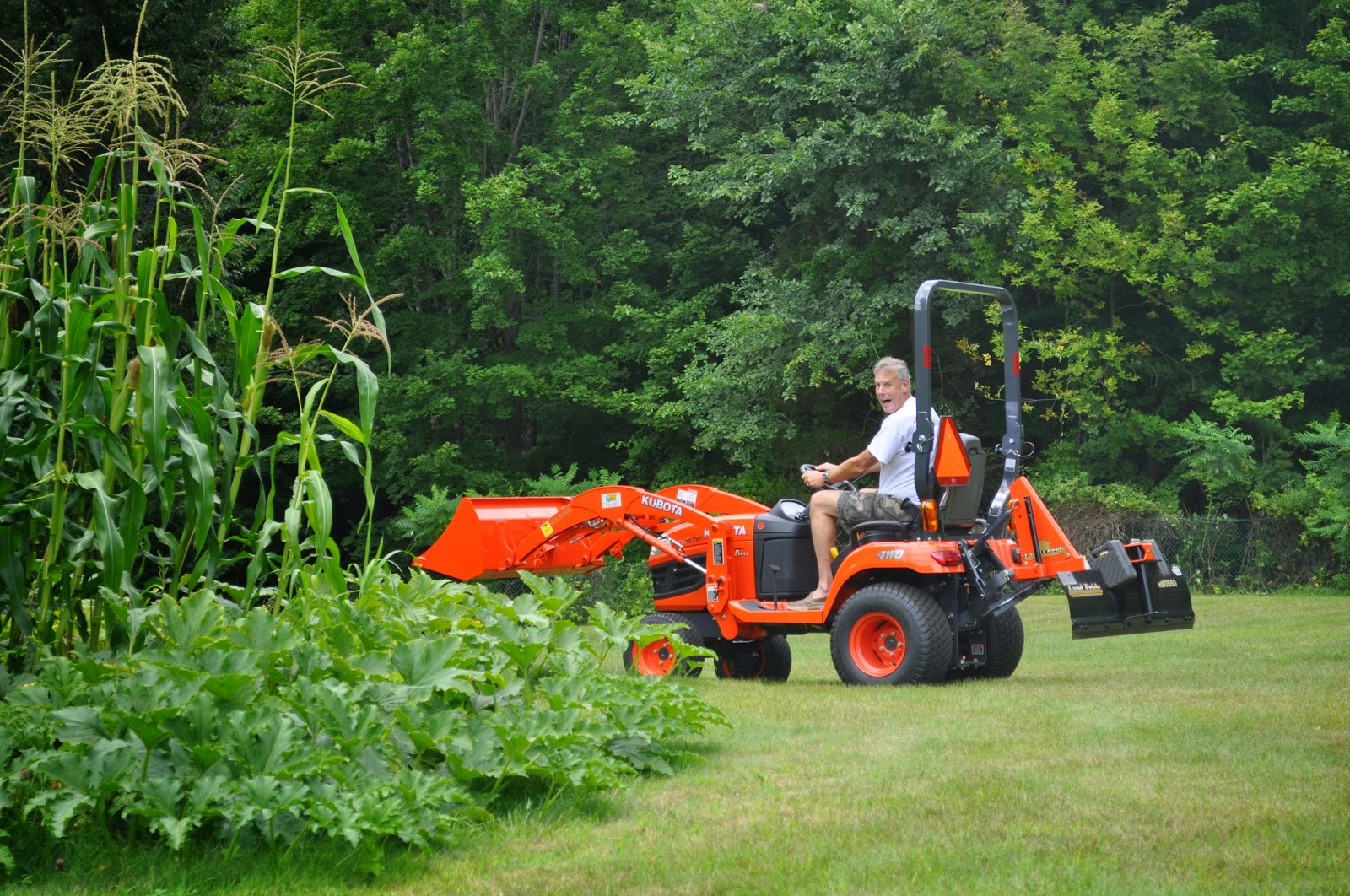 TKG, who likes to give everything a name, is calling her (it) "Fancy Princess" after a horse she used to ride that was, quote, "difficult but fun." I was holding out for a more manly name, like "Ferocious Tiger." Well, it is orange and black. I lost, of course. Wish I'd bought one years ago. You know, a lot of guys in the throes of middle age buy themselves the Harley-Davidson they've always wanted, but me...?
That's it for this week. Thanks for reading, and happy harvests to all!
Posted by Eight Gate Farm NH