Welcome to another Harvest Monday report from Eight Gate Farm.

Summer crops are diminishing, but that's to be expected, since summer itself is almost gone. There won't be many more tomatoes after this. Normally the plants go strong right until frost. The shishito pepper plant is still producing though, somewhat. We're near the end of the full-sized, first ears of corn and starting to dip into the smaller, second ears. 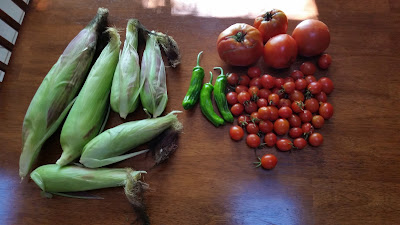 Seedless raspberries are still giving us joy, however. 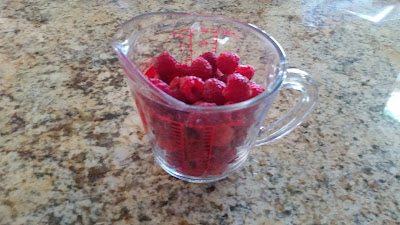 It was my intention to let the "Floriani" red flint corn in the Survival Garden stay on the stalk until all ears were fully dry. But the woodpeckers had other ideas, and many of the ears were damaged. Thus I picked them regardless of their dryness, and put them in the sunroom to hopefully finish drying. It worked for the beans anyway. There are about 50 ears, some very large, some small. As I recall this is about half of what I got last year, but I only planted about half, so I guess it works out. We still have lots of corn left from last year, and we grind it when we need it. 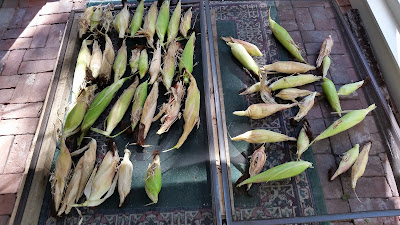 A mid-week harvest featuring another lovely muskmelon, and a "Sugar Baby" watermelon. They ain't kidding about the baby part--this is the size of a cue ball. We have bigger ones waiting to ripen--this was a drop, but actually the few bites we got were pink, juicy, and sweet. 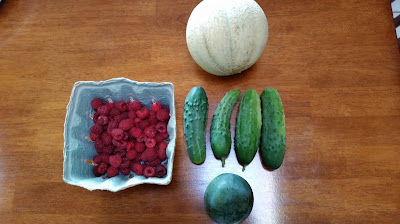 The Kitchen Goddess, all by herself, shelled the Black Turtle beans whose drying pods I showed you a couple of weeks ago. At 3 lbs. 2 oz. (~1.4 kg.), this was a much better result than the yellow-eye beans. And I love black beans! 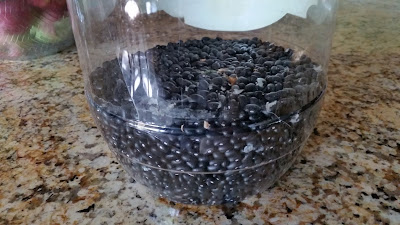 We took all the scarlet runner beans. They are finishing drying indoors, though most already were dry, and being snacked on by something. You can see the attractive purple beans at the bottom. Also shown is the last zucchini, and probably the last of the pathetic eggplant harvest. 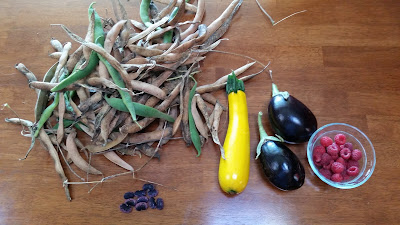 Here's the runner beans so far. As always, I save 50 seeds for next year and we get a hearty meal from the rest. It's a pretty good return on the $3 seed packet I bought 3 years ago. I grow it more for the ornamental value, with its coral-pink blossoms. 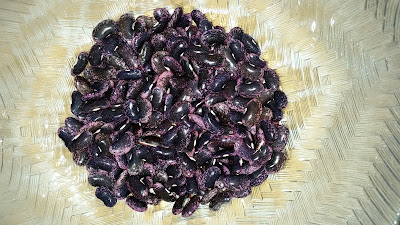 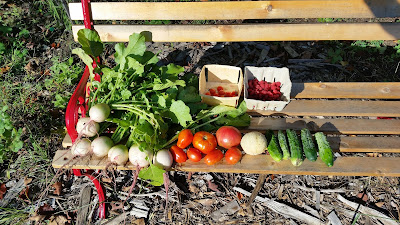 Ten days ago TKG crushed all our grapes (with her hands, not her feet, thank heavens) and began the fermentation process in three loosely covered buckets. On Saturday, we got to the next phase--pressing. Actually we got 4 gallons of "free-run" wine, and pressed 2 gallons out of the fermented grapes. We probably could have gotten another 1/2 gallon from them, but didn't want to run the risk of pressing out excess tannins etc. We mixed one of the free-run gallons into the press run to even it out. We want to experiment if free-run is really that much better. So we now have two buckets on the "gross lees," covered with stoppers and airlocks. 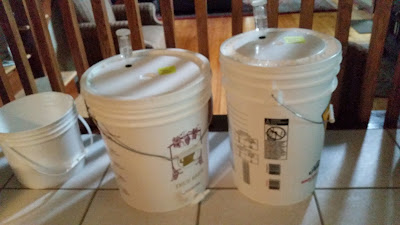 I put the pomace (pressed grapes) in the compost, thus hanging out a welcome sign to all area alcoholic chipmunks.

This second stage is supposed to last for two days, then we will siphon into glass containers for secondary fermentation (more of a settling process). This will last for several months. So doing rough math, 6 gallons equals approximately 23 liters, or 30 bottles of wine, enough to last us a good week--ha ha! This was from about 3 bushels of grapes.

Our kale (Dwarf Blue Curled), which was interspersed with the now-harvested Chinese cabbage, has really taken off. 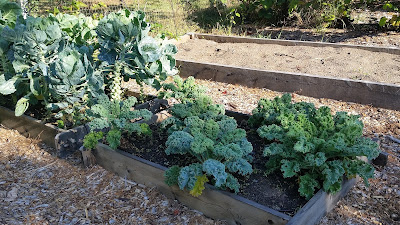 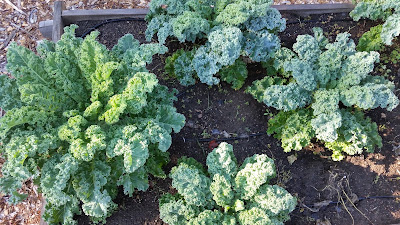 What do you think? Should we let it go until after first frost, or start picking it now?

That's it for this week. Thanks for reading! Please click back to Daphne's Dandelions, the sponsor of Harvest Monday, and check in with the rest of the world.
Posted by Eight Gate Farm NH