A light harvest on Tuesday. I've ripped out 7 out of our 12 tomato plants, and that cuts down on the production. Never before have I had plants die mid-season. The Rutgers (in foreground) is doing pretty well, however, and producing nice red fruits for table or sauce. 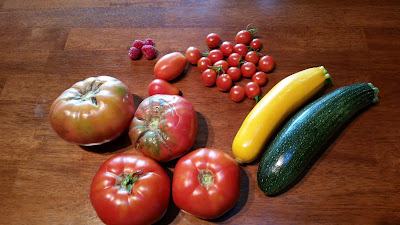 On Wednesday, a 2.75 gallon bucket of grapes. 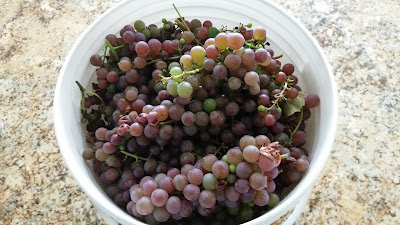 Also, beans and carrots. The beans are coming now from the seeds I planted to fill in holes in the first planting, where they never germinated. That first planting gave us a lot of beans, but is long gone now. It's nice to get a few more while summer is still with us. 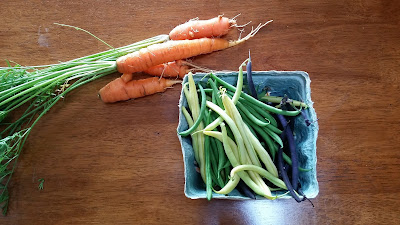 Also, some corn for dinner! 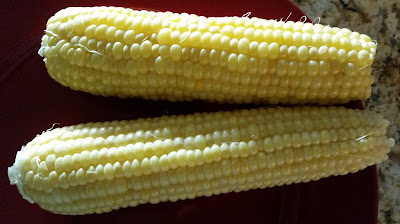 The watermelon radishes are sure fattening up. 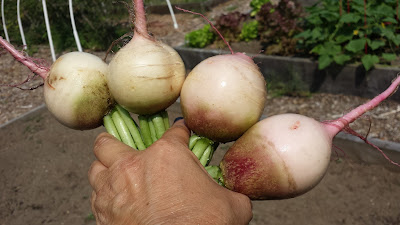 Thursday pickings. The eggplants are very small this year (and few in number). Shown are the first "Cross Country" pickling cucumbers from the second planting this year, on July 14, where the peas were. The vines are much more lush than the ones from May, which never really took off. I think we might get enough for pickles before frost hits, and not just the occasional one for fresh eating. The shishito pepper plant hasn't been producing much (none of the peppers are), but with this we finally collected enough to make that super-trendy appetizer and be like the cool kids. 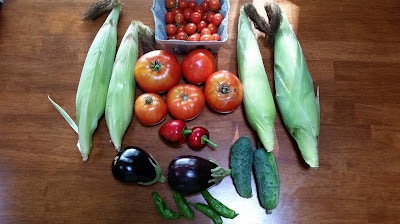 On Saturday, no garden work. Instead, we drove about 3 hours west to the Vermont Garlic and Herb Festival in Bennington. The stated goal was to talk to the professional garlic growers and select bulbs for fall planting. I've never grown garlic before, so I was soliciting advice. That may have been the purpose, but what a great, fun event! Good music, good food, lots of fun things to look at, and a beer tent! Of course there was garlic everything to try--fudge, popcorn, you get the picture. No garlic beer, thank goodness, or I would have had to try it. There were quite a few growers selling bulbs. Most said that hardneck garlic grows the best in the Northeast, so that's what I bought: Music, Georgian Fire, and German White (probably the most popular among the growers). I vow to properly label the plantings.We came home tired, happy, and smelly! As the festival motto goes, Vermont Stinks!

We paid on Sunday for the play on Saturday. There was a lot to harvest. 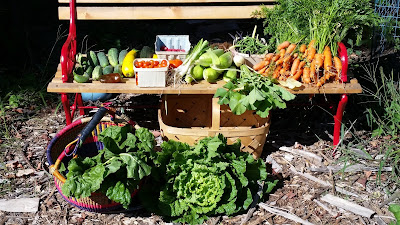 The Kitchen Goddess said the bench looked like a mini farm stand. You might notice our first, scallion-sized leeks. And a gluttonous six ears of corn. On the ground is chard in a lovely basket we bought at the fair, and another head of Soloist Chinese cabbage--weighing 4 1/2 pounds. TKG made our first batch of kimchi, and she had enough cucumbers to make refrigerator dill pickles - yay!

But the star of the show in the fenced garden was a complete picking of the remaining grapes--two bushels worth. 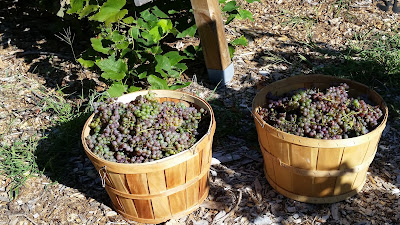 While she was doing all that cooking (tomato sauce too) in the hot kitchen, and then picking the grapes off the stems to go in the freezer for later wine-making, I cooked in the hot sun to pick all the "Black Turtle" beans in the Survival Garden. Here they are all laid out on a screen to finish drying in the sunroom. 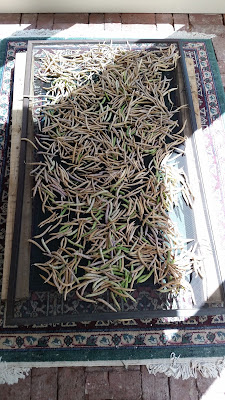 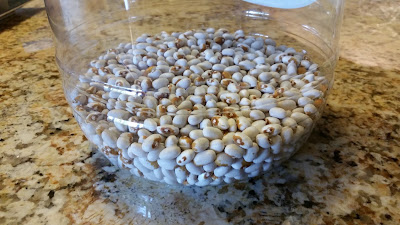 All those pods I showed a few weeks ago yielded 1.5 pounds. That's from about 30 row-feet. It made me wonder if potatoes are a better survival crop--we got 29 pounds of them from 15 row-feet. Of course the beans will keep practically forever, and potatoes won't. I wonder how beans compare nutritionally (in terms of calories per gram, etc) to potatoes--with the understanding that beans have a lot more protein and fat.

Here's the last artichoke, that we left to flower. Unfortunately I think we needed two separate flowers for the plant to pollinate, and I doubt there's another artichoke growing within miles of us. But it sure is pretty! 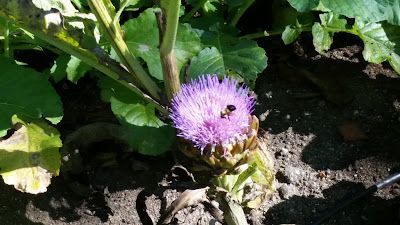 That's it for this week. Thanks for reading. Today it's Labor Day in the US, and as all gardeners know, that means another day "off" to labor in the garden. Take a break from your labors and check out the wide world of gardening on Daphne's Dandelions, the hostess of Harvest Monday!