Hello again from Eight Gate Farm. We got back a week ago from our mysterious trip. I still can't disclose where, but it was warm, beach-y, and ancient ruin-y. Unfortunately, within a day of being back, we both came down with a combination of Zika, SARS, and malaria...or maybe just the flu. The poor Kitchen Goddess was down for the count for most of the week, but me, possessing manly strength, bounced back in a day or so. Pause for eye-rolling.

My MIL watched the house while we were gone, and kept things picked, but here is what was waiting for us. First, the "firsts." And the star as always is the beloved artichoke. 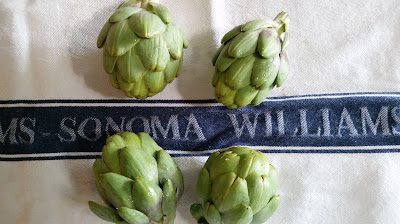 Next is summer squash. I grew "Yellowfin" like last year, and because so many of you grow the "Italian-style" zucchini with the ribs, I bought "Cocozella Di Napoli" when we were at the Baker Creek store. I can't really say it tastes different, but it sure is pretty. 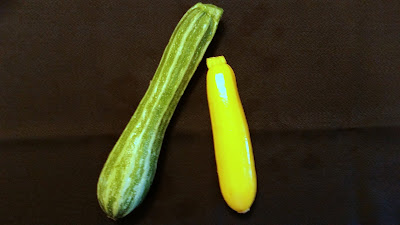 Next is cucumbers. I'm actually growing four varieties this year (the failure of the broccoli and brussels sprouts left some room). Here you see five "Homemade Pickles," and two of either "Calypso" or "Cross-Country" or both. In my usual style I forgot to note where I planted what for those. Homemade Pickles may be a dumb name, but I'm liking how prolific these bush-type plants (actually short vines) have turned out to be. All are really tasty. 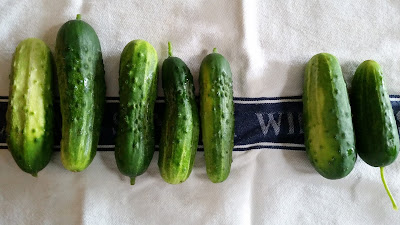 Next we have the first tomatoes and a Hungarian Wax pepper. 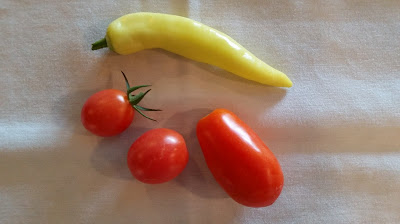 The two smaller ones are "Umberto," a free sample I got a few years ago. They are supposed to be a 1 - 2 oz paste-type, but these are smaller and actually were quite good just popped in the mouth. The other is an "Incas" paste-type. We will need quite a few more to get sauce production! Unfortunately this is shaking out to be a bust year for tomatoes; my fault for where I placed them. Most plants are getting a lot more shade than I expected. Well, they get sun all morning and then in the later afternoon, but skip the mid-day sun. I guess that's the important part; not so much the total of sunlight. Anyone know?

The last first is the "Desiree" soup peas. Once again the crop was not all true--some have green pods instead of blue. These are now drying, and I'll show the peas themselves when finished. We will get maybe one pot of pea soup. Is it worth it? 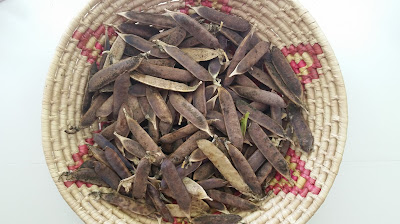 Now the rest of the harvests this week. 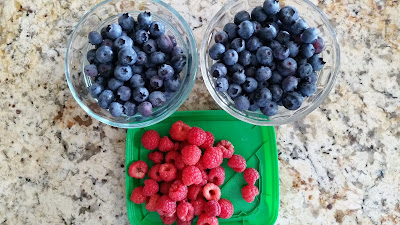 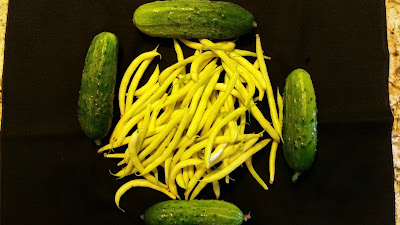 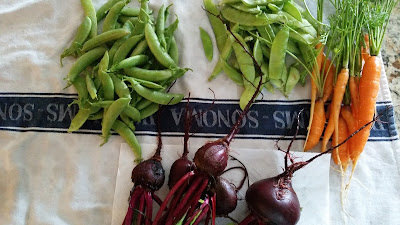 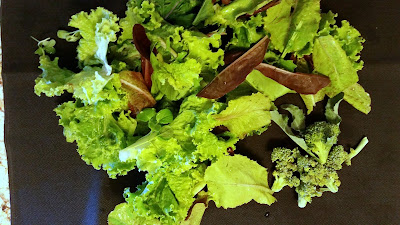 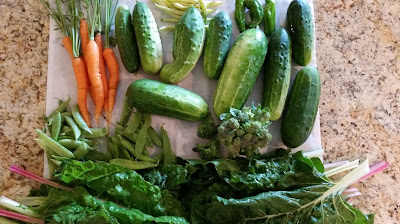 TKG cleaned up the first batch of garlic (Georgian Fire) that had been curing for several weeks. The bulbs look to have 4 to 5 good sized cloves within. And now I know where the term "hardneck" comes from--the stalks are like wood. Does anyone know if it's harmful to leave them long like this? I hope not, because I like the way it looks, and all garlic should have convenient handles! 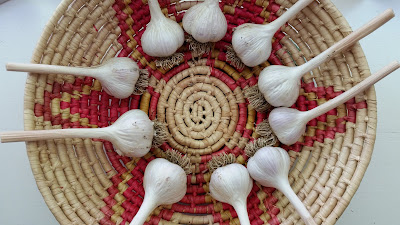 Of course, with all the cucumbers coming in, TKG had to start making pickles. So here's the first batch of "Bread & Butter." You know, I always thought Bread & Butter pickles was a New England thing, having never heard of them before moving here oh-so-many years ago. But I read that actually they were trademarked by a couple in the Midwest during the Depression, who had a surplus of small cucumbers, made them this way, and used them to trade for commodities, like, wait for it, bread and butter. Apologies if I just told you something you already know. 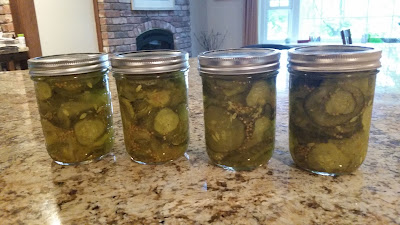 Sorry to go on for so long, but it was a busy week! Thanks to Dave at Our Happy Acres for keeping the Harvest Monday tradition flourishing, allowing us to connect with other gardeners around the world. See you next time!
Posted by Eight Gate Farm NH