Hello again from Eight Gate Farm! And Happy Labor/Labour Day to all North American gardeners, who undoubtedly will be laboring/labouring in their gardens today.

This weekend we went to the Vermont Garlic Festival, staying overnight this time. It was a ton of fun. I will probably be writing a post about it this week. When we got home on Sunday morning, it was time to get dirty. Very dirty, as the following shows.

There were other first harvests this past week. We got our first "Amish Paste" tomato:


As I've said before, while others are getting bushels now, our plants are only producing ones and twos. Blame me for siting them poorly.

As I also said in a previous mid-week post, our Chinese cabbage was damaged by a rogue woodchuck. Damaged, but not destroyed, as it turns out. The plants recovered amazingly, and here's the result:

The one on the right was over 2 pounds, the others are slightly under 2. Of course, I started 3 more plants when these were damaged, so there may yet be more cabbage.

Continuing harvests this week included a nice basket of solanacea. I had spotted another groundhog in the field where these were growing, so some of the tomatoes were taken a little under-ripe to protect them. 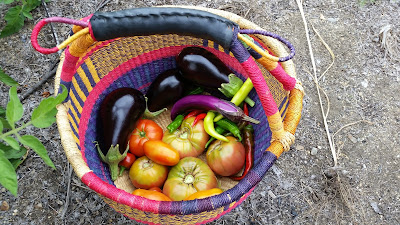 However, the groundhog (woodchuck, or whistle-pig if you prefer) suddenly passed away for some reason. So we are safe once again.

We're still getting lots of wax beans, Diva cucumbers, zucchini, and a few raspberries at a time. Here you see the Chief Produce Inspector making sure the corn was ripe. 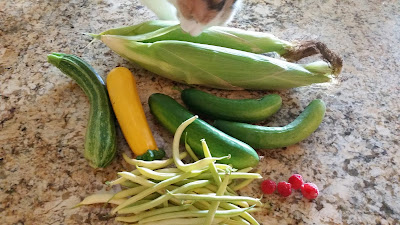 We had another bountiful picking of chard, in the basket on the left: 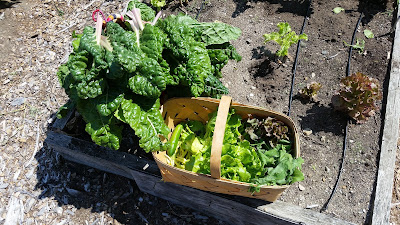 The basket on the right included a generous, and final, picking of summer crisp lettuce. Here is is all laid out. These had also been damaged by the groundhog, but also recovered. 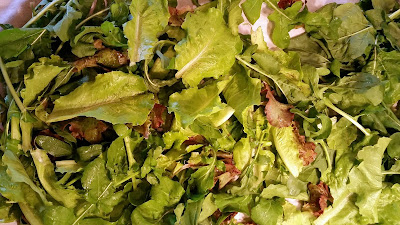 We are bidding a slow, sad goodbye to the Honey Select corn. We had several meals of 2 ears apiece, which is a luxury.

The Kitchen Goddess and I were talking about which crop we most look forward to. For her, it's the artichokes (also now finished). For me, sweet corn is the thing I crave most. What is your favorite?

Next year I want to plant an early, a mid-season, and a late corn so I can indulge myself all summer long, without having to go to the farm stand, as we will probably do this year.

The other day I went out to the garden after TKG had spent some time there. I was startled to see balloons flapping over the grape vines: 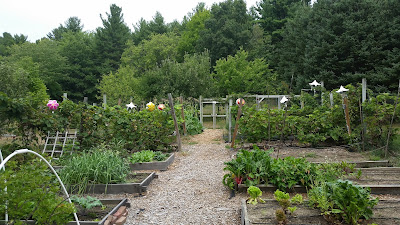 Turns out she put them up to scare off birds from the nearly-ripe grapes. Or so she says. I think she secretly had a little birthday party for them.

So this week kicks off the Week of the Grape. Having bought a refractometer, she has judged the "brix level" and "acid balance" are just about right. Science is hard! I just taste them, and they are delicious. But she's the boss. Anyway, we will pick, crush, and press them very soon. Another vintage in the making.

That's all for this week. Thanks for reading! Make sure to check out all posts on Harvest Monday, hosted by Dave at Our Happy Acres.