Hello again from Eight Gate Farm! It was another week of many "first harvests," so I'll get right to them.

Although the local farm stands have had sweet corn for several weeks now (GMO??), we got our first this week. This is a new one for me, the all-white, synergistic variety called "Illusion." It produces long, slender ears with small kernels that are incredibly sweet and tender! They just pop. As an added feature, it has the best tip fill of any corn I've grown, which I guess is not all that important for a home grower, but is nice. We've been enjoying it every night. It's a winner for sure.

Earlier in the year, The Kitchen Goddess went to a talk on seed saving given by the owner of Hudson Valley Seed Company. She came back with a packet of heirloom "Blue Jade" sweet corn. This was part of the reason she got a plot in the community garden, as I did not have space for it. She picked some this week.

It really is an interesting plant. It only gets 3 feet tall, and has multiple stems, so you'll get a lot of  small ears from each plant. They say it's one of the only corns for container gardening. And the taste? Well, it is sweet, but not like the modern hybrids. I guess that isn't a fair comparison. If you like the "old fashioned" taste and texture, this is one to consider.

I picked most of the "Kenearly Yellow-Eye" beans I was growing for drying and storage. I like to pick them when the pods have turned yellow-white, and finish drying them indoors. I planted them heavily this year, two 20-foot rows. Harvesting them was a lot of stooping in the hot sun, not very pleasant. I'll finish harvesting by pulling up the plants, which is much easier.

I also harvested most of the Pinto beans I grew for the first time this year. I only gave them about ten feet of space, so the harvest is much smaller. Still, I'm happy with the result, and plant to grow more next year.

We got the first Cocozella di Napoli zucchini. I've grown this for several years, and love its rich, nutty taste. I think the fruit is very attractive, too.

I think I've mentioned that all the onions I started from seed didn't do well. To make up, I bought starts and sets. Here is the result of the generic white onions from sets. I hope they store well, but I have no way of knowing.


Now for tomato talk. I've grown Caspian Pink for many years, and we love its flavor. Some say it's superior to Brandywine, which is the standard for heirloom taste. I don't know about that, because I'm not aware if I've ever tried Brandywine. So I grew it too this year. They both came in about the same time. Here they are, in all their ugly, heirloom glory. The Brandywine (left) weighed over a pound. We're letting them get a little riper.


We also got the first "Cosmonaut Volkov." It weighed about ten ounces.

And the first "Costoluto Genovese." I grew this last year, too, and liked it. This year it seems kind of bland. But it should be good for sauces. I do love the pumpkin shape of the fruit.

We also got the first "Plum Regal" (left), and Romas.

Now for a sampling of ongoing harvests. TKG brought back more Pruden's Purple and Fourth of July tomatoes from her allotment. I finally got to taste them, and they are quite good. 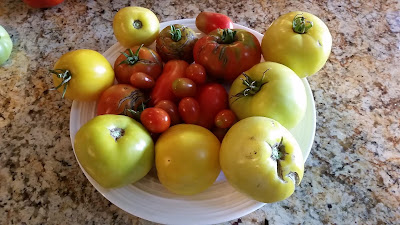 And here's the biggest Oregon Spring so far, at 10 ounces: 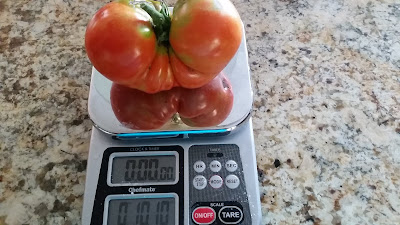 We got some nice harvests of Diva cucumbers.

And more carrots as needed.

We still have a lot of salad turnips from the spring planting, and they are getting quite large.

Back to heirloom tomatoes. For fun, we are going to somehow conduct a blind taste-test of Brandywine, Caspian Pink, Pruden's Purple, and Cosmonaut Volkov. Besides Pruden's, I haven't yet tasted them so far this year. Will Caspian beat Brandywine? I'll report the results next week.

Finally, here's a ratatouille made by TKG in her own style, with green and yellow zucchini, Anaheim pepper, and purple turnips (that's right). It was absolutely delicious, and so colorful. 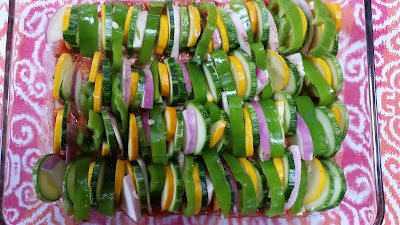 Whew, another long post...sorry! Future posts should be shorter, as the "firsts" are winding down. Thanks for reading, and thanks to Dave for hosting Harvest Monday, now in its new home at HappyAcres.blog.
Posted by Eight Gate Farm NH