Hello again from Eight Gate Farm! As summer winds down, I'm going to present some "last harvests" of the season before turning to the "firsts."

The Taxi tomato plant gave up its last fruit. This variety is always the first to arrive and the first to depart. Still, I can't complain about the 50+ sweet fruits it gave us in its short life.

I removed the netting from the blueberry bushes and gleaned a small final picking to add to the stash in the freezer. 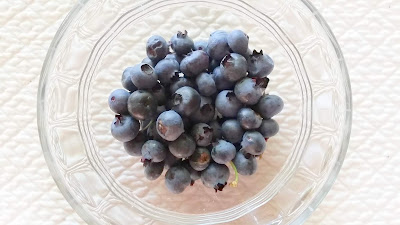 And the "Illusion" all-white sweet corn was completely picked over and the stalks cut for fall decorations. In the photo, some of the cobs look white but this is just a trick of light. We ate what we could from this final harvest, and the rest were cut for "niblets" for the freezer. Then The Kitchen Goddess boiled the cobs to make corn broth. 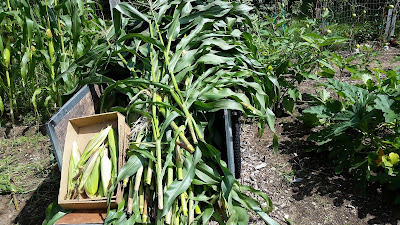 But don't cry for me! The next day I harvested the first of the "Montauk" bi-color corn.

Montauk, another synergistic variety, turns out to be every bit as sweet and tender as Illusion. Its cobs are a bit larger, but it doesn't have as good tip-fill. It's considered a "late-season" corn, while Illusion is "early," but it's funny that only 8 days distinguishes the two (72 vs. 80). Every afternoon this week I've been going out to the patch and picking five ears. What a treat.

By the way, "synergistic" means it's bred to have a certain ratio (varies by variety) of "Sugary Enhanced" (se) and "Supersweet" (sh2) genes. It's careful breeding, not GMO. The advantages to synergistic are many: excellent sweetness, tenderness, good field-holding ability, and what's called "cool-soil vigor." I hedge the bet by buying seed that is treated with an organic fungicide. If you've struggled to grow sweet corn, I suggest you try a synergistic variety.

The first "Halona" muskmelons were fully-ripe this week. They are fantastic.

I cut the first head of "Soloist" Chinese cabbage. This was planted in early summer.

I picked the first "Jilo" eggplant. This is a South American favorite, but I'd never heard of it. I got the plant from a fellow Master Gardener, who in turn got the seeds from some Brazilian friends. These are picked small, about the size of a duck's egg. If left to turn orange-red, they are quite bitter, which some like, but my friend's friends say at that stage they feed them to the chickens.

The plant is large and looks to be quite a producer. TKG added them to other eggplants in a dish she made. The Jilo is only very slightly bitter, but pleasant, and is noticeable from the other eggplants.

I set out three little Walking Onion bulbs last fall when I planted garlic, and they produced this for me. I didn't let them "walk," but they should still keep producing over the years.

I got the first "Cherry Bomb" and two "Maule's Red Hot" cayenne peppers. 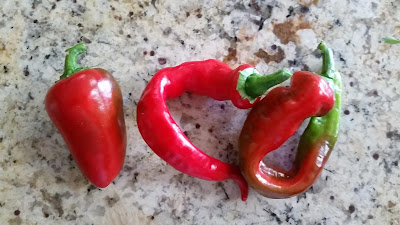 Also, the first "Jimmy Nardello's" and a "King of the North" bell pepper. Normally I don't grow bells, but I scored a free seed packet and wanted to see how it produces. I was waiting for it to turn red, but it detached itself.

Last year I purchased and grew a "Thai Hot" pepper plant that produced scores of 1" firecrackers. This year I bought some seeds, and somehow the result is even smaller than last year. Ridiculously so! I wanted to pop one in my mouth, but TKG claimed them for something she is making. Maybe that saved me from a mouth on fire.

I picked all the D'Anjou pears from our two scraggly trees. These are now ripening indoors.

And the last of the "first harvests," Kennebec potatoes, 18 pounds in total. Not as good as some years, but definitely better than last year's.

In the picture you can see the bed they grew in, one of the galvanized steel stock tanks I set up as "raised beds" last year. This certainly kept the voles out, but might have had an impact I was not expecting. Most of them are funny-shaped, and look like snowmen. Doing some research, I learned that this can be a function of excess heat. So while the metal beds protected them from damage, they may have heated up too much.

For ongoing harvests, here is a sampling: 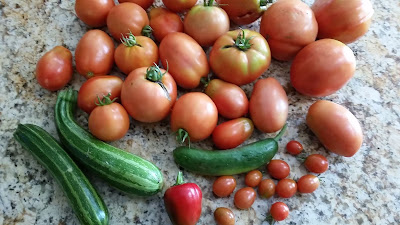 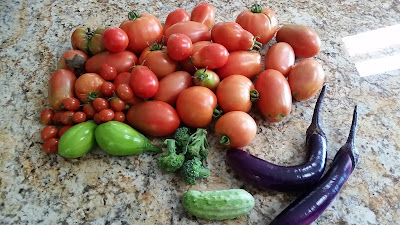 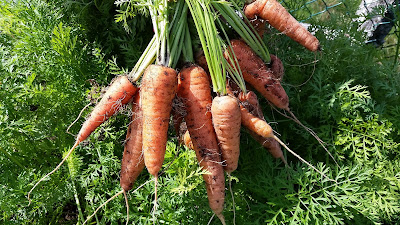 I close with a picture of a Mexican Sunflower I planted for the first time this year. It is really lovely, with odd 3-lobed leaves, a velvety stem, and beautiful orange-red flowers. It's a winner. 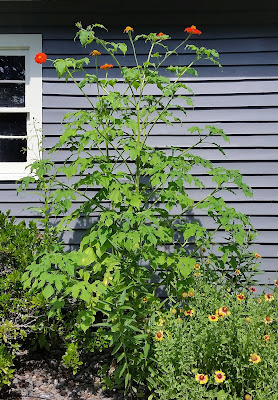 Once again, a long post! If you made it this far I admire your persistence. Thanks for reading, and thanks as always to Dave at HappyAcres.blog for running the Harvest Monday forum that lets us show off our harvests.
Posted by Eight Gate Farm NH