Here's another Harvest Monday update from Eight Gate Farm. It was a busy week, so brace yourselves! It's going to be a long one. I'll try to keep the words to a minimum.

Starting with first harvests, we got a Bride eggplant.

And "Homemade Pickles" cucumbers. While I still think the name is unoriginal, they do produce uniform fruits that taste good. I planted a hill of these just after taking down the pea vines in mid-July, leaving the trellises so the cucumber vines could have some support.

Here's the first, and only, harvest of black beans. Quite a crop this year. The pods are now further drying indoors. 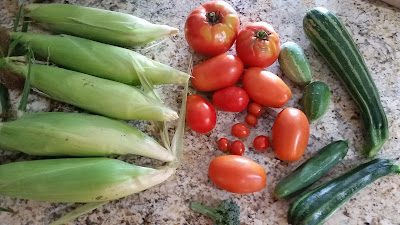 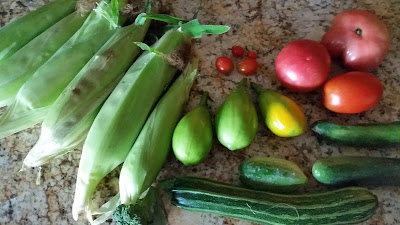 On Wednesday TKG finally had enough of her kitchen island being awash in a sea of tomatoes, so she canned 8 jars of crushed tomatoes and 7 jars of salsa. On the hottest day of the week. Oops! 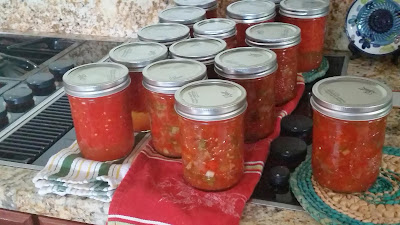 Then, the following day, this. Hilarity ensued. 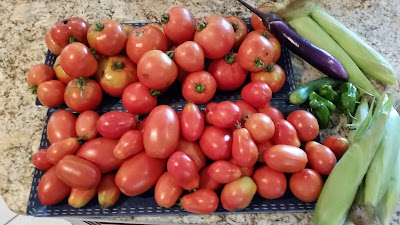 That's the last of the sweet corn, by the way. We maybe could have gotten two more nights worth, but squirrels suddenly developed a taste for sweet corn. There isn't a fence made that will keep out squirrels, unless it's electric, and who wants to deal with that? 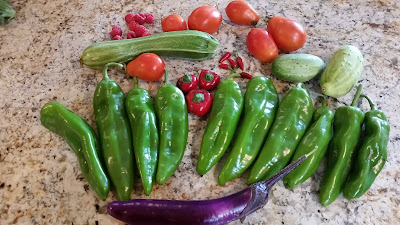 Some broccoli side shoots, and the only head of Blue Wind to survive its summer planting. 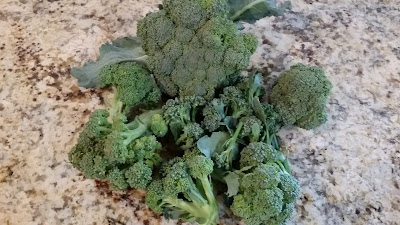 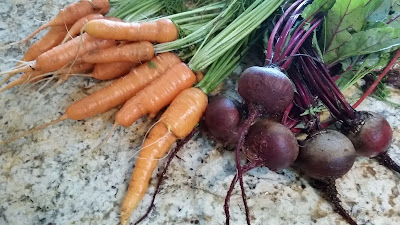 We needed more space in the freezer, so on Saturday TKG processed all of last year's frozen strawberries and raspberries. Her mom came down to help. Here's what they made.

Many jars of preserves and sauces. 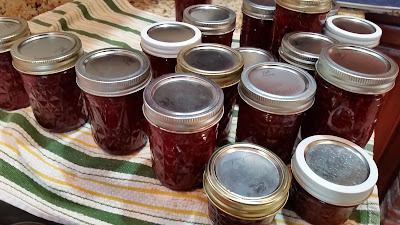 Two quarts each of raspberry and strawberry liqueurs. Very potent! And a small jar of mixed berry pie filling. 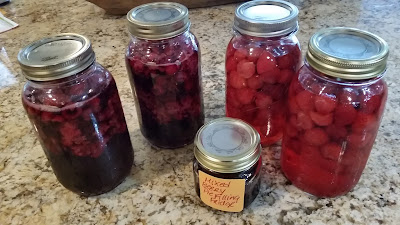 Taking a break, they went over to the community garden and came back with this: 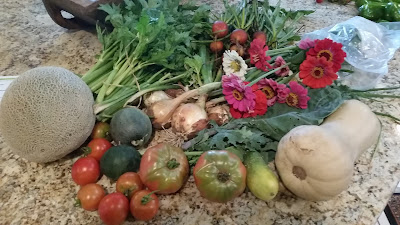 The MIL went home with most of this, but we divided the muskmelon. It weighed almost 4 pounds, and was perfectly ripe. We had our half for breakfast Sunday, and it was wonderful. 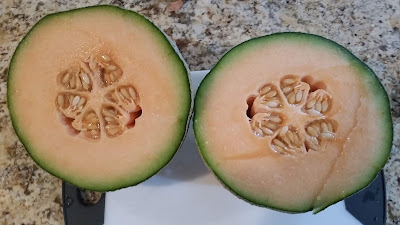 Also on Sunday TKG did more canning. First, these are the pears I picked last week. They were put in a paper bag, and had ripened nicely. She made two pints of pears in light syrup, plus some left over for immediate enjoyment. 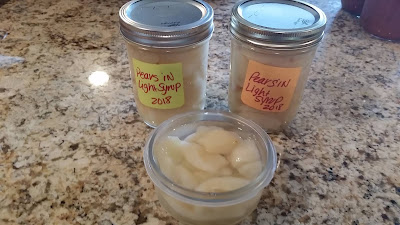 And 3 1/2 quarts of what she calls "Sunday Funday Bloody Mary Mix." Just four of those little tiny Thai Hot peppers were enough to give the whole batch a nice zing. She also added the horseradish harvested last fall, and still in good shape. 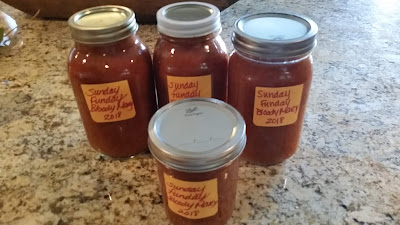 Then, guess what? More tomatoes were harvested. No rest for the weary.

I close with a cool picture. We leave a lot of milkweed around the property for the Monarch butterflies to feed on. One caterpillar rewarded us with building its chrysalis in a most inconvenient place...the coils of the hose we use to water the front beds. Oh well, it's watering cans for the time being.

Okay, enough! Thanks for reading, and thanks as always to Dave for hosting Harvest Monday at HappyAcres.blog. See you next week!
Posted by Eight Gate Farm NH