Autumn is here, and you can feel it in the air. Harvests are slowing way down. We got the remnants of Hurricane Florence on Tuesday, delivering 4 inches of rain in basically half a day. That of course is nothing compared to what the poor folks in the Carolinas got.

We still are getting some new harvests, however. First up is the Paradicsom Alaku Sarga Szentes sweet pepper. This is probably the only one that will get ripe in time. Our Harvest Monday host, Dave, showed them off a couple of weeks ago. He's getting more than I will, as always.

It's a name that's hard to pronounce and even harder to spell. I think it loosely translates to "Aggravatingly Slow To Ripen." It is attractive, though.

The first "Calabrese" hot peppers matured. These are from the seeds of a pepper given to me by a nice man at a winery in Northern California a couple of years ago. It looks like just another cherry pepper, but it is fiery hot.

I got the first harvest of the flat-podded bush bean "Romano." These were planted at the end of July, and I wasn't sure we'd have enough time before frost to get any, but they did well.

Also new this week is the spaghetti squash "Sugaretti Hybrid." It's a 2017 AAS Selection, and is a short-vined variety. The fruits are small, about one and a half pounds. It sure does look like Delicata, which I'm guessing is in its parentage.

Also the first Early Butternut Hybrid, another short-vined variety. It's on the right, below, joined by a conventional butternut The Kitchen Goddess brought home from her community garden plot. So it's not really all that early, is it? 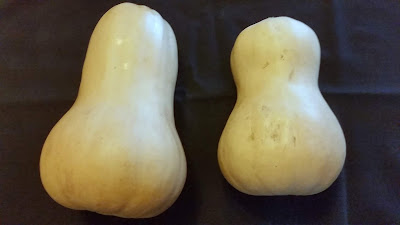 I planted "Painted Mountain" flour corn this year, and had high hopes. It germinated beautifully and grew quickly. Unfortunately squirrels developed a taste for it, and I couldn't control them sufficiently to prevent them from ruining basically the whole crop. Here's all I could salvage. After drying and shelling, it fills a pie dish.

I took the last two "Soloist" Chinese cabbage. The outer leaves were being eaten, but the inner cores were fine, and weighed out to about 3 pounds each. 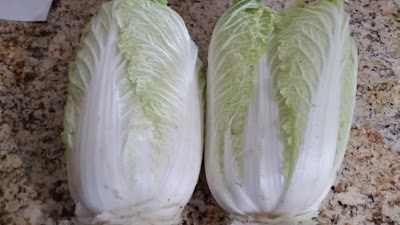 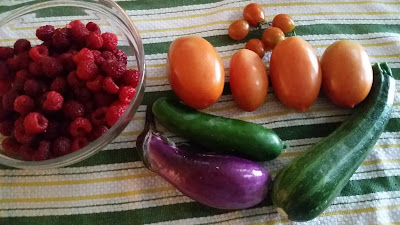 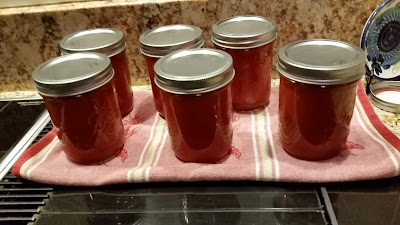 More summer crops trickled in. There won't be enough tomatoes left to justify a canning (to TKG's relief), but we will get some more sauce for the fridge. 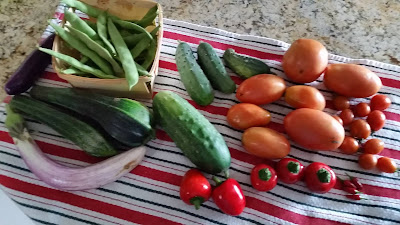 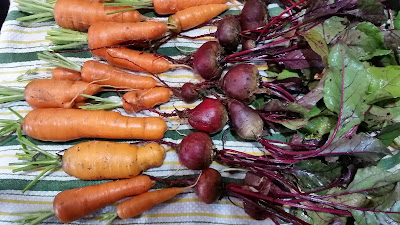 Helpful me scrubbed them and laid them out to dry on one of TKG's precious dish towels. Boy did I get in trouble for that. Who knew beets stain? Well I did, but unfortunately forgot.

In wildlife notes, I went out into the woods to change the memory card in the Game-Cam. Here's a nice 8-point buck who seems to be inhabiting the area. The image was captured in early September, but he's still around, as I spooked him when I got to the edge of the woods. Maybe I'll have an "appointment" with him come November. 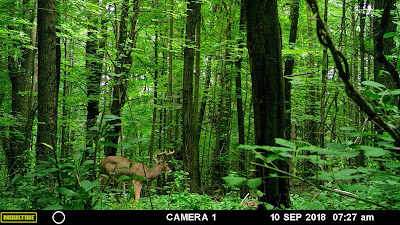 That's all for this week. Thanks for reading! Please join me in viewing all the posts on Harvest Monday, hosted by Dave at HappyAcres.blog.
Posted by Eight Gate Farm NH