Hello again from Eight Gate Farm. We are continuing to have a number of "first harvests" as well as continuing ones.

It's shaping up to be a good year for eggplants. We took the first Mitoyo, a Japanese type. I never seem to learn about the sharp thorns on its calyx. Ouch!


And the first Italian-type Nadia and Midnight Queen. Midnight Queen is a new variety for us, which is supposed to be quite early, but for us at least it's no earlier than the familiar Nadia. I can't yet tell you if there's a difference in taste, as we had so many accumulated eggplants we roasted them all on the charcoal grill to make baba ghanoush.

We got the first Cour di Bui tomato. It's an oxheart type, and I don't know if the name is just Baker Creek's spin, or if it is truly different from other oxhearts. In any event, we both agreed it has exceptional flavor.

And the first Diva cucumber, The Kitchen Goddess's favorite.

For a sampling of continuing harvests, we got more Juliet tomatoes.

An odd group of four Costoluto Genovese tomatoes, which had fused together. I think if I had waited for all of them to get ripe, the red ones would have rotted.

A nice picking of Shishito peppers. Not a hot one in the bunch. Not sure if I've already mentioned it, but I was given a packet of "normal" shishito seeds, and planted one to go along with the Mellow Star hybrid shishitos I always grow. The normal ones are said to have a one in ten chance of being  very hot, but so far, none have. Time will tell. 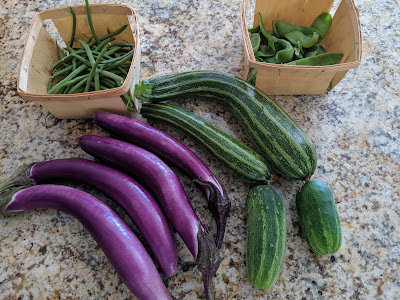 And almost daily pickings of raspberries and blueberries. 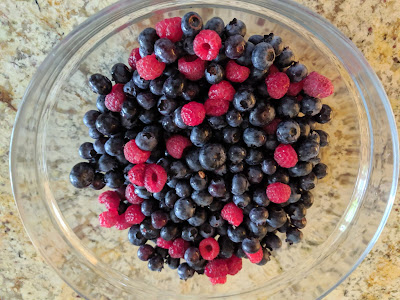 Lastly, here's the garlic we pulled several weeks ago, now cleaned up and ready for use. That's a good thing, as last year's garlic is on its last legs. On the left is Georgian Fire, a porcelain-type, and on the right is Russian Red, a rocambole-type. I don't actually know what the "types" mean. Georgian Fire does live up to its name, as it is wonderfully spicy. Russian Red is a new one to us, and looks to have performed better than Georgian Fire.

Yikes, another long post. Thanks for sticking with it if you've made it this far. Thanks as always to Dave at HappyAcres.blog for hosting Harvest Monday.
Posted by Eight Gate Farm NH