It's the last weekend of September, which means it's time for... 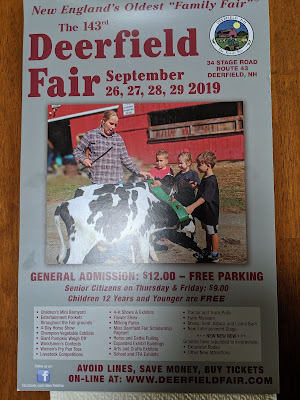 This is the 4th year we've entered our vegetables and canned goods in the competitions. It's just so much fun! We are learning the rules as we go. For vegetables, the judges look for ripeness, uniformity, size, and appearance. In theory, each is judged on its own merits, not in comparison to others of the same type.

Starting with peppers, here were my candidates for selection. You need to display 5 peppers of any given class (sweet green, hot red etc.). 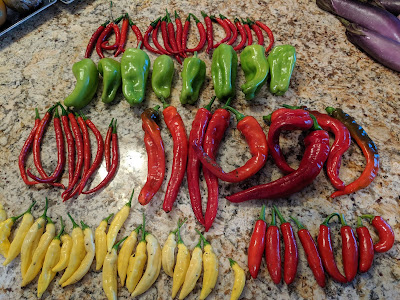 I really wanted to enter my Sugar Rush Peach peppers (first harvest of the year), but decided there weren't enough with the true peachy color. Too bad, as I think this is a really attractive pepper.

For eggplants, you need to display two of any given class. Here were my candidates. 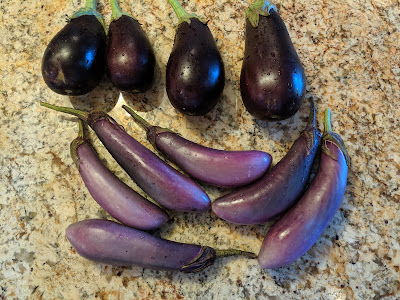 Top row, Nadia (globular class). I rejected these for lack of consistency.
Next row, Ping Tung (elongated class). I chose the two on the right. 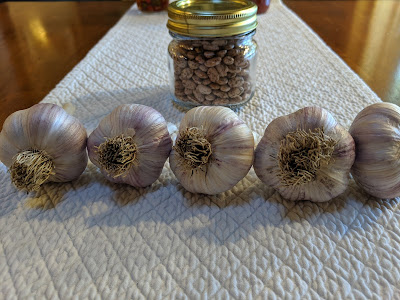 For the first time, The Kitchen Goddess entered her own vegetables. Here are Aunt Molly's Ground Cherry, Blue Berries tomatoes, and cucamelons (entered into the pickling cucumber class) 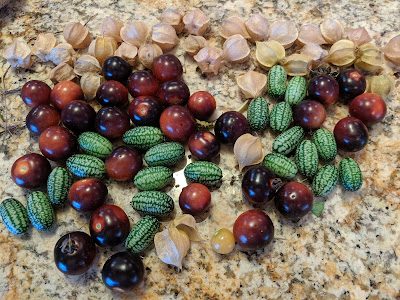 She also entered (from left) Three-Color pickled hot pepper rings, 100% cayenne chile sauce, and spaghetti sauce. This was significantly less than she normally enters, reflecting my poor showing of tomatoes this year. 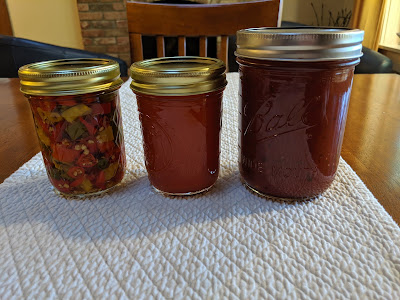 Once again, she made a clever scarecrow, a beauty queen attending a garden party. She had hops for hair, a bouquet of carrots, eggplants, and kale, and a bracelet of cucamelons. I really liked the hot red pepper necklace.

We went to the fair on Thursday to have fun, and see our results of course. Here's how we did: 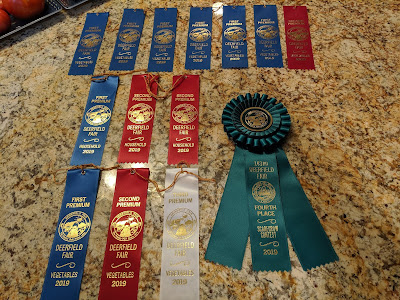 The top row is my vegetables. All first prizes, except for the Cubanelle peppers, as anticipated. TKG got a blue and two reds for her canned goods (tough judging this year), a blue for her cucamelons, a red for ground cherries, and third prize for the Blue Berries tomatoes. This was curious in some ways. For one, there were four other entries for this type. I believed it was an unusual tomato that was not widely grown, but apparently not. The other thing was all of them got third prize. Either the judge doesn't understand this variety, or doesn't like it!

She got fourth place for her scarecrow. She was disappointed, but I feel it was worth it. I saw many people smiling as they looked at it, and the $70 cash prize is no slouch either.

Our total cash winnings were $118, which is just a dollar less than last year. We don't do it for the money, of course, but it does go quite a way toward next year's seeds and supplies.

Now for other harvest notes for this week. I transplanted my cauliflower plants on May 1. They grew big, but did not seem to be producing heads. They are only supposed to take 60 days or so, which would have avoided the real heat of summer. Imagine my surprise when I went out to the garden on Thursday morning to find they had suddenly cast off their garments and revealed themselves. Wow! I've never successfully grown cauliflower before, so I'm really happy, even if it did take nearly 4 months!

And TKG came back from her community garden plot with this impressive tomato haul, plus two artichokes. She made a batch of sauce for her mother, who shares the plot. 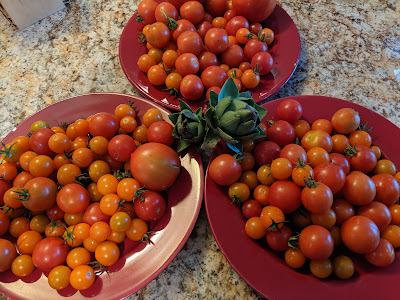 Once again, I encourage you to enter your crops in a local fair. It is really worth it from a goofy pleasure perspective. I'm already dreaming and scheming for next year. "Best In Show" is my goal. This year someone's pea pods won that. They were nice, but not really dramatic, in my opinion. Or is that jealousy talking?
Posted by Eight Gate Farm NH