Welcome to another Harvest Monday post from Eight Gate Farm. We are still harvesting crops for the first time this year, and I will present them first.

Here is "Big Thai Hybrid" hot pepper. It truly is a lot bigger than the tiny conventional Thai Hot I grow, as you can see in this side-by-side. It makes me think the normal one is really just an ornamental that you can also consume (carefully, these babies pack heat). The hybrid's fruits also hang down, while the non-hybrid's point upward. 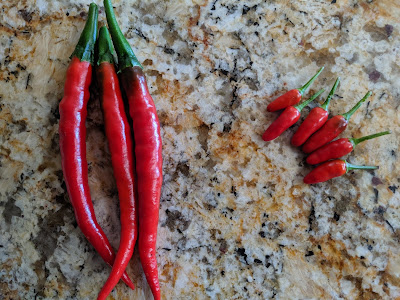 Here is Hot Lemon pepper. I don't know if this is the same pepper sold by others as Aji Lemon or Lemon Drop. Its heat is somewhere between a jalapeno and a cayenne, and is said to be citrus-y, which I didn't really detect. It is fruity and tasty however, and looks to be productive. 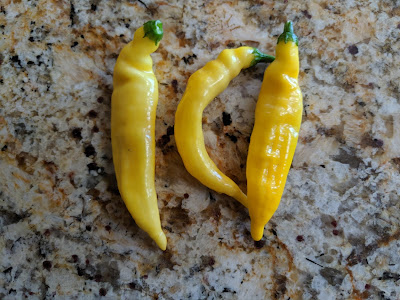 This is Thai Yellow Egg eggplant. It was an impulse buy at the Baker Creek store last year. I really wish I had read the reviews first, as they uniformly say the fruits are tiny and seedy. This variety will have no place in our gardens next year. 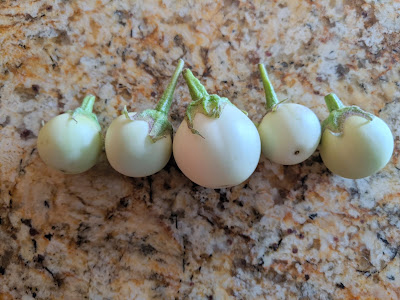 We got the first heirloom Pruden's Purple tomato. It did very well in our taste comparison last year, second only to Brandywine. 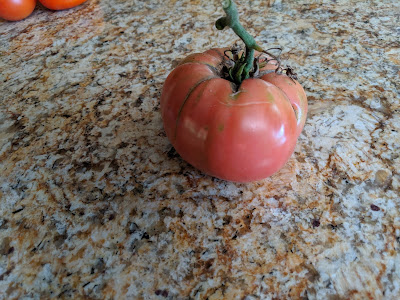 I had three seeds left of "Homemade Pickles" cucumber, so I planted them in mid-summer. Two germinated, and one of them was promptly eaten by something, so only one plant resulted. It bore its first fruit this week. I like to use pickling cucumbers as slicers; I love the crunch. 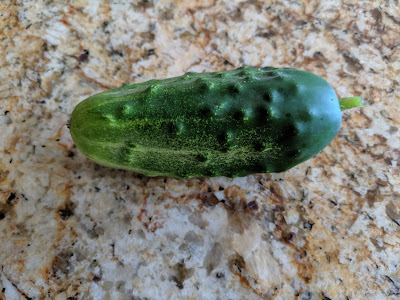 We have two struggling pear trees, that were grown in too much shade (not our fault). Only one produced fruit this year.

All the pinto beans were picked and dried sufficiently to put away. This is the total result. 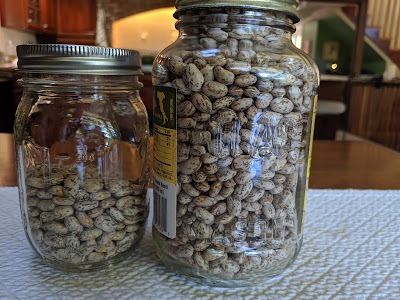 Now on to continuing harvests. First up is an assemblage of paste tomatoes. 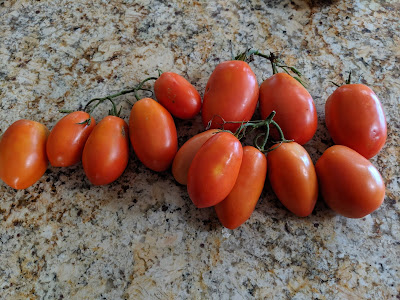 Next, a colorful assortment of hot peppers, all of which I have featured in this post or previous ones, with one exception. The skinny one on the far left is from a generic cayenne plant I bought. It really contrasts with the Maule's Red Hot cayennes to its immediate right. 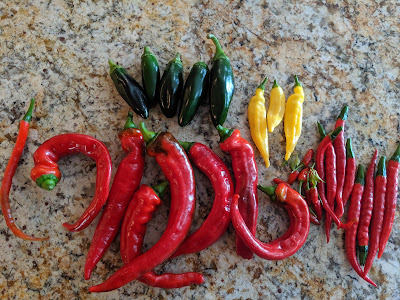 Back home, a major picking of shishito peppers. This was more than we could consume that night, even with guests over for dinner. So maybe four plants is too much, but it does come in handy at the beginning of the season when each plant only is producing a few. 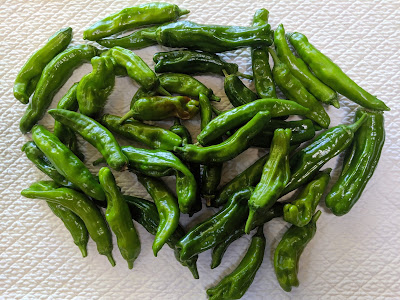 And the zucchini plants are still producing, despite squash bugs and powdery mildew.

Labor Day weekend is the time of the Southern Vermont Garlic and Herb Festival. We drove there Saturday, stayed overnight, and returned Sunday in plenty of time to do garden chores. I like to pick over the selections of seed garlic, and there is music, food, crafts (many garlic themed of course). There are also quite a few craft distilleries in recent years. I would say the average going price for seed garlic is $12 a pound right from the growers. New (to us) this year was "black garlic." This is garlic that has been fermented, which brings out the sweetness. We bought some, and TKG mixed it with mayonnaise to serve with our artichokes. It was really good. 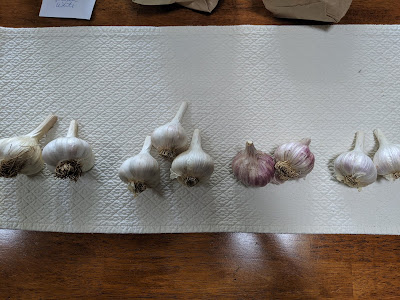 I purchased (from left) German White. Katterman, Persian Red, and Vietnamese Red. The latter two are purple-striped varieties. Katterman is sold only by one grower, who got the seed years ago from an old-timer by that name. The grower says it's his best-producing garlic, and having grown it several times, I tend to agree. I'm going to plant 10 cloves of each variety this fall.

That's it for this week. Thanks for reading, and thanks as always to Dave, our gracious Harvest Monday host, at HappyAcres.blog.
Posted by Eight Gate Farm NH